Through Creative Accounting, Trump Tries to Cast America’s Death Toll as an Achievement

If Donald Trump had been as successful at responding to the pandemic as Angela Merkel, 39,000 Americans who died of Covid-19 would still be alive today. 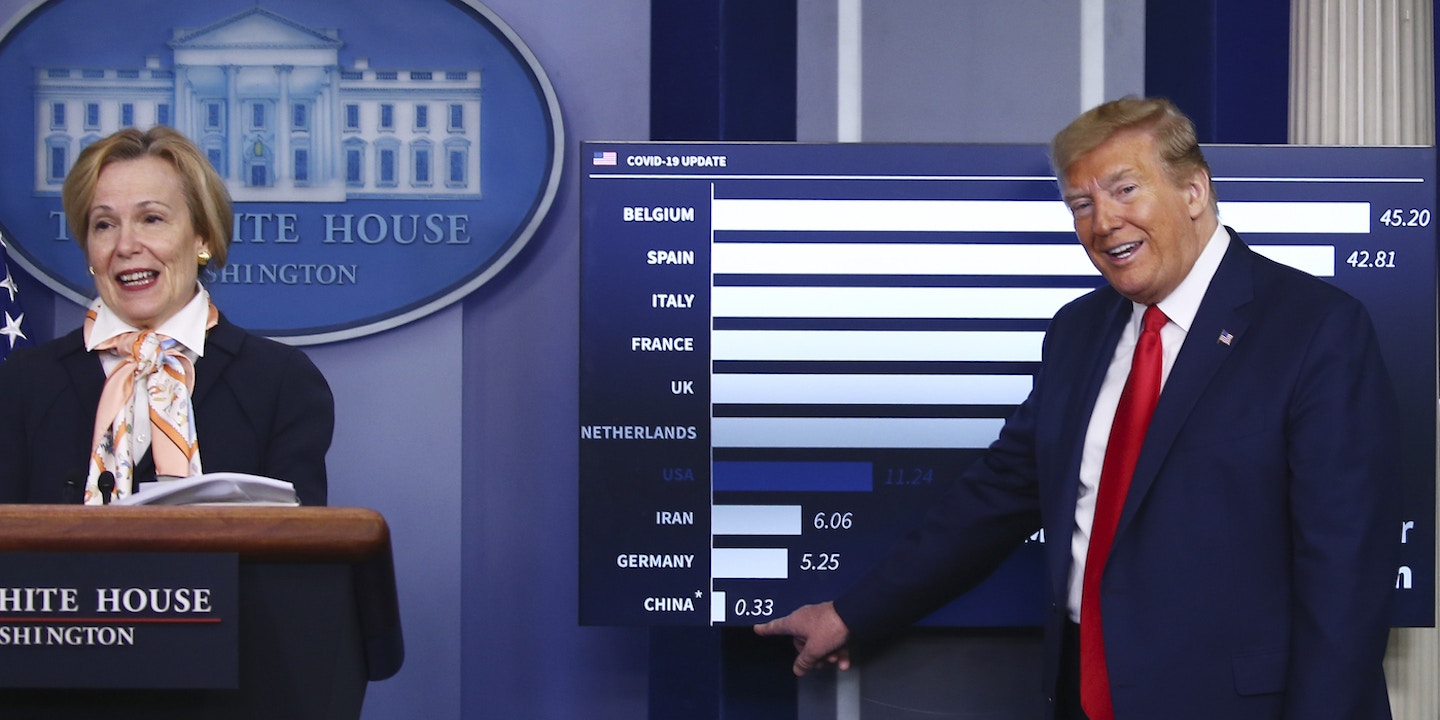 In a week where the number of Americans killed by Covid-19 passed 66,000, Donald Trump assured us that this death toll, looked at from the right angle, is really proof of how great he is at his job.

Asked on Thursday to account for his son-in-law and adviser Jared Kushner’s description of the federal government’s chaotic response to the coronavirus pandemic as “a great success story” that “needs to be told,” the president said that he agreed. “We’ve solved every problem,” he claimed. “We solved it quickly.”

“I don’t think anybody has done a better job — with testing, with ventilators, with all of the things that we’ve done,” Trump added. “And our death totals, our numbers per million people, are really very, very strong. We’re very proud of the job we’ve done.”

Trump’s strange boast about the “very, very strong” death toll puzzled many viewers, but it helps to know that, for weeks, the president and his senior medical adviser, Dr. Deborah Birx, have been urging Americans to consider that, on a per capita basis, the U.S. mortality rate is lower than that of several of the worst-hit countries in Western Europe.

On April 10, for instance, Trump asserted that “we’ve kept our fatality rate very, very low compared to other countries.” Later in the same briefing, Birx said that he was right. “As the President noted, our mortality in the United States is significantly less than many of the other countries when you correct them for our population.”

Dr. Birx says that the covid19 mortality rate in the United States is "significantly less" than that of other countries when adjusted for population pic.twitter.com/jmixmm36gS

“The United States has achieved a significant lower mortality rate than almost all other countries,” Trump said at another briefing six days later.

“While we mourn the tragic loss of life — and you can’t mourn it any stronger than we’re mourning it,” Trump said at the start of a briefing on April 18, “the United States has produced dramatically better health outcomes than any other country, with the possible exception of Germany — and I think we’re as good or better.”

Birx then presented a bar chart comparing the death toll in the U.S., expressed as a share of population, to the far higher rates of death in six European nations: Belgium, Spain, Italy, France, the United Kingdom and the Netherlands. After she did so, Trump interrupted her presentation to point to the far lower reported mortality rate of another country on the chart, China, and suggested that the authorities there must have lied about their death toll to produce that statistic.

But that chart also included evidence that it is profoundly misleading to cast the U.S. response as a success by comparing it to just those six countries. That’s because the data also showed that Germany, whose success Trump had downplayed, had a far lower mortality rate than the U.S. As the data presented by Birx showed, as of mid-April, Americans were more than twice as likely as Germans to have died from Covid-19. While the U.S. had recorded 11.24 deaths per 100,000 people then, Germany, which had a high rate of infection, had kept deaths down to 5.25 per 100,000.

Today, Americans are faring even worse in comparison to Germans. According to updated mortality rates compiled on May 10 by Johns Hopkins researchers for the 10 countries with the most confirmed cases of Covid-19, the U.S. now has 24.31 deaths per 100,000, compared to 9.13 in Germany. A chart posted online by researchers at Johns Hopkins showed mortality rates as of May 10 for the 10 countries most affected by Covid-19.

Expressed in Trump’s preferred metric of deaths per million, for every 243 Americans lost to Covid-19 so far, just 91 Germans have perished. What this means is that if the federal government in Washington had been as successful at keeping its citizens alive as the one in Berlin, the death toll in the U.S. would not be, as it was on May 10, 80,087, but 30,077.

In other words, Trump and Birx have been engaged in a kind of statistical sleight-of-hand, one that seems designed to distract attention from the fact that tens of thousands of Americans would still be alive today had their government managed the crisis as well as the German one.

At no point in the April 18 briefing did either Trump or Birx explain why Americans should be satisfied with being less likely to die of Covid-19 than citizens of Britain or France, but in so much more danger than Germans.

There are also other ways in which it is misleading to compare deaths in the U.S. so far to those of the six European nations with the worst mortality rates. To start with, by focusing just on other hard-hit countries, Trump distracts attention from the fact that, as of May 10, 131 countries had lower mortality rates than the U.S. — including Greece, Austria, Denmark, Portugal, Canada and Japan.

Most notably, South Korea, which was so successful at suppressing the outbreak through early action and widespread testing that it has recorded just 256 deaths — a mortality rate of 0.50 per 100,000 on May 10 — was also not included in the ranking presented by Birx. If the U.S. had matched South Korea, just over 1,500 Americans would have died to date.

Despite this, Trump has continued to incorrectly refer to that chart from the April 18 briefing as proof that the United States is “right at the top” of world rankings. Speaking to the press on Thursday during an Oval Office meeting with New Jersey’s governor, Phil Murphy, Trump asked Birx to get out the chart, falsely claiming that it showed “we’re the leader of the world, we’re really the leader, in this case, the leader of the world. And we’ve done better, if you look at our deaths, if you look at mortality rates…. I’m going to get a chart, because it’s maybe the most impressive thing — right? — how we’ve done.”

Then there is the fact that all six of the most affected European countries are much more densely populated than the U.S., and population density appears to make it harder to stop the spread of the virus. A screenshot of a chart from the World Bank, showing the relative population density of several countries.

That Germany and South Korea are also densely populated indicates that there are other factors at play, but the first wave of outbreaks in Europe and the U.S. have been most intense in major cities and their surrounding metropolitan areas.

Even the least densely populated of the six European nations that have been hit the hardest by the outbreak, Spain, is more densely settled than it might seem. Alasdair Rae, a professor of urban studies and planning at the University of Sheffield, noted in 2018 that Spain’s population density of 93 people per square kilometer is misleading, since only about 13 percent of the country’s territory is actually lived in. Barcelona, along with Madrid, has been one of the two Spanish cities most affected by the pandemic. As Rae pointed out, “more than 53,000 people inhabit a single square kilometer area in Barcelona,” making it the most densely populated square kilometer in Europe.

As a series of visualization of population density created this week by Rae shows, the worst affected areas of Europe — northern Italy, Belgium, the Netherlands, northern France and southern England — are among the continent’s most tightly packed regions.

The U.S. by contrast, has a much higher rural population than Western Europe. For that reason, it might be more appropriate to compare the mortality rates of those European nations to that of the seven badly hit northeastern American states that have formed an interstate compact to collaborate on the phased reopening of their economies.

Those states — New York, New Jersey, Connecticut, Massachusetts, Rhode Island, Pennsylvania and Delaware — have recorded 35,718 deaths out of a combined population of about 53.6 million. That mortality rate of 66.6 per 100,000 for the region exceeds the current figure for every European country except Belgium, which, unlike the U.S., includes in its count a large number of deaths in nursing homes that are suspected of being virus-related, but have not been confirmed by testing.

While Belgium’s coronavirus emergency task force has come under some political pressure for including so many suspected cases — nearly half the nation’s total deaths — health officials have refused to change their method, describing surveillance of the disease as more important than negative publicity.

One Belgian government minister, Denis Ducarme, noticed and was not happy about the chart of national mortality rates displayed by Birx and Trump last month to bolster their argument that the U.S. was doing relatively well in handling the pandemic. “Our method of counting is the most exhaustive possible,” Ducarme wrote on Twitter. “When @realDonaldTrump makes a macabre ranking, by pointing the finger at Belgium to give the impression that all is well in the U.S.A. I find it disgraceful, the basest of politics.”

Last Updated: Monday, May 10, 2:21 p.m. PDT
This article was updated with the latest mortality rate data, as of May 10, for 10 nations, including the United States and Germany.