GOP lawmakers urged the Federal Reserve and FDIC to loosen regulations put in place after the 2008 crisis. The changes were slipped into the CARES Act. 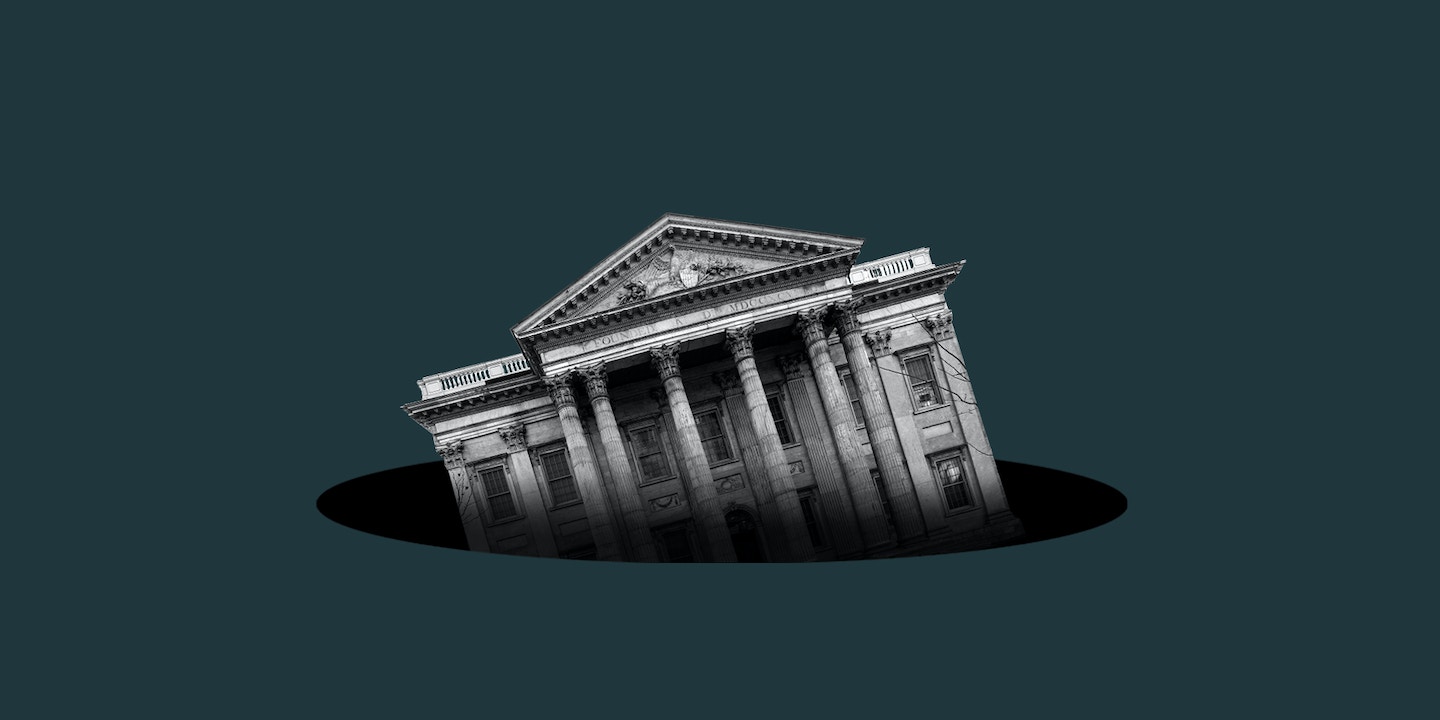 And so far, banking regulators have obliged, lifting rules imposed after the 2008 crisis that limit risk-taking and require banks to undergo more strenuous audits.

But experts are warning that the deregulatory blitz, sold as a fix to stimulate business by encouraging more lending, raises the potential for a flood of small bank failures, potentially lengthening economic woes and risking the need for future bank bailouts.

The flurry of advocacy began in March just as the imminent threat of the pandemic seized headlines. That month, several GOP lawmakers contacted regulators at the Federal Reserve and the Federal Deposit Insurance Corporation to urge officials to adjust the threshold at which community banks may qualify for exemption from all risk-based capital requirements.

“We strongly urge you to use the full measure of discretion afforded by Congress to maximize capital simplification and regulatory relief for the greatest number of community banks,” wrote Rep. Denver Riggleman, R-Va., in a letter signed by eight other House Republicans, obtained via a Freedom of Information Act request by The Intercept. In addition to Riggleman, the letter was signed by Reps. Scott Tipton, R-Colo.; Bill Huizenga, R-Mich.; Ann Wagner, R-Mo.; Frank Lucas, R-Okla.; David Kustoff, R-Tenn.; Barry Loudermilk, R-Ga.; John Rose, R-Tenn.; and Blaine Luetkemeyer, R-Mo.

The letter asked that the Federal Reserve and FDIC lower the Community Bank Leverage Ratio from 9 percent to 8 percent, a move that would qualify about 400 banks for special exemption from scrutiny over the level of risk taken on by a bank. The lower leverage ratio, the lawmakers argued, would “support credit in thousands more communities across the country.”

Ordinarily, a complete revision of federal regulation would require months of deliberation, an open comment period, and an agency justification backed by evidence. But the Covid-19 emergency short circuited the process, and within weeks, the leverage ratio was lowered.

The demands in the congressional letter were slipped into the CARES Act, the $2.2 trillion bailout legislation. The legislation waived a number of regulations on banks, from accounting standards to loan limits, and temporarily lowered the Community Bank Leverage Ratio to 8 percent through the duration of the public health crisis.

Banks must maintain a certain risk-based capital requirement, meaning banks with riskier assets must have higher levels of capital to contain potential losses. Bank stability is also measured by a leverage ratio, which is simply the percentage of capital held of total bank assets.

Lowering the Community Bank Leverage Ratio means hundreds of banks can hold onto less capital while avoiding standards that restrict the types of risk they take on.

“The industry and regulators love to use jargon and impenetrable language but the leverage ratio is nothing but a capital buffer that a bank has to have to absorb losses itself so it won’t have to be bailed out by taxpayers,” said Dennis Kelleher, president of the financial reform group Better Markets.

“It would really turn logic on its head to now say the banks should not have to comply with those other rules and they should get a lower leverage ratio,” added Kelleher.

“The whole idea of lowering capital requirements to respond to a pandemic is wrong,” said Jeremy Kress, an assistant law professor at the University of Michigan School of Business.

Kress noted that while public attention was focused largely on “too big to fail” mega-banks, hundreds of community banks failed during the crisis that started with the 2008 financial collapse.

In a recent academic paper, Kress observed that out of the 489 banks that failed and were resolved by the federal government from 2008-2013, all but nine were community banks. The failures of community banks during this period cost taxpayers nearly $50 billion. In contrast to the bailouts of large Wall Street banks, which were eventually paid back with interest to the federal government, the small bank bailouts only incurred significant costs.

The failure of small banks during the last crisis also created a cascading effect of economic damage, as small businesses and entrepreneurs around the country were cut off from credit, driving one of the slowest economic recoveries in U.S. history, Kress argues.

If the current pandemic leads to a wave of defaults, more community bank failures could be on the horizon. The deregulatory push to reduce capital requirements could hasten the level of bank failures, said Kress, exacerbating the current economic crisis.

“When we see a bunch of small institutions failing simultaneously,” said Kress, “that leaves a lot of communities and small businesses and individuals without needed access to credit.”

“The efforts that we are seeing today to weaken the Community Bank Leverage Ratio is only going to make the community banking sector more fragile and increase the likelihood of another collapse of small banks,” he added.

The leeway for regulators to exempt the community banks from risk-related assessments came from special authority granted by the Economic Growth, Regulatory Relief, and Consumer Protection Act, a law passed in 2018, the largest bank deregulation measure ushered in by Trump.

The measure removed proprietary trading restrictions from banks with $10 billion or less in assets imposed by the so-called Volcker Rule following the 2008 crisis. It also instituted the Community Bank Leverage Ratio rule, allowing small banks to skirt regulatory standards known as Basel III capital rules if they maintain a leverage ratio between 8 and 10 percent. The FDIC set the rate at 9 percent following the law.

The Congressional Budget Office, the independent body that analyzes legislation, suggested at the time that the deregulatory push would threaten the stability of community banks, which would likely use the exemption to chase higher returns by taking on more volatile loans and securities. The CBO noted that even a Community Bank Leverage Ratio of 9 percent could raise FDIC costs by increasing the probability of bank failures and FDIC bailouts.

After winning passage of the 2018 law, the industry went to work lowering the Community Bank Leverage Ratio well before the pandemic. Over the last year, representatives from the Mortgage Bankers Associations and the Independent Community Bankers Association, have pressed for the 8 percent standard, a push that was renewed in recent months, lobbying disclosures show.

Rep. Jodey Arrington, R-Texas, a former FDIC official under President George W. Bush, was one of the lawmakers pushing to loosen the standard.

In a separate letter to bank regulators, Arrington asked for “ample time” for community banks to comply with the new 8 percent Community Bank Leverage Ratio and for the change to be made permanent. “Furthermore,” the congressman wrote, “in order to maintain long-term economic growth, the CBLR should be maintained at the minimum eight percent threshold, allowed by P.L. 115-174, beyond the COVID-19 pandemic.”

The Texas lawmaker dismissed concerns that reducing regulations could raise the risk of bank failures.

“Relaxing regulations in a reasonable way including lowering reserve requirements by 1% for community banks during the immediate crisis as well as our longer term economic recovery will provide greater access to much-needed capital for small businesses, which, in turn, will help keep people employed and strengthen our overall recovery efforts,” said Arrington in a statement to The Intercept.

“Lenders of all sizes will certainly have an increase in risk to their loan portfolios; however, banks have an incentive to operate responsibly in order to stay solvent and community banks who operate on a thinner margin need some targeted relief to continue serving rural communities like mine,” the lawmaker added.

Bank industry advocates have long argued that capital requirements have curbed lending. But banking industry watchdogs have pointed out that a growing body of empirical research shows the exact opposite and that well-capitalized banks make more loans and more high-quality loans.

Still, community banks have won a series of deregulatory measures in part by leveraging their relative popularity in contrast to the big banks. Despite the economic risks of lifting bank rules, small banks have been at the tip of the spear in weakening financial safeguards.

“Everybody loves community banks, right?” said Kress. “They’re the most sympathetic industry in Congress because every member has a community bank in their district. They do a lot of residential and small business lending, they sponsor your kids’ kickball team, they seem far removed from the financial engineering of Wall Street.” “Community banks, motherhood, and apple pie,” chuckled Kelleher.

The lofty reputation held by community banks, however, has concealed the danger they pose to the economic system.

“The bank industry pushes in a lot of different ways,” Kelleher noted. “They do it directly against the regulators, they do it indirectly through their legislative allies. It’s really pretty sad how many are using the pandemic as nothing but a pretext for their deregulation agenda that they’ve been asking for for years.”