With Tara Reade’s Allegations, Joe Biden’s Campaign Is Only the Latest Chapter of America’s Accountability Problem

Biden has said, “I am not sorry for anything I have ever done.” Biden, accused of sexual assault by one woman, has all but secured the Democratic nomination, gearing up for a general election against Trump, who faces at least 25 sexual misconduct allegations that range in criminal severity. Both men deny all the allegations.

Biden’s accuser, Tara Reade, was one of eight women who registered complaints of inappropriate touching in April of last year — before Biden ever jumped into the presidential race. As Biden appeared likely to be the Democratic nominee, Reade came forward in late March and told her story about her former boss. In an interview with podcast host Katie Halper, Reade said Biden penetrated her vagina with his fingers. She alleges the incident occurred in 1993, while she was an aide in his Senate office. What Reade describes is rape, according to the Department of Justice’s own definition. In an interview with Megyn Kelly, Reade has called on Biden to end his presidential bid and “step forward and be held accountable.”

Now Reade, not Biden, is on trial in the American media landscape. Democrats, the party of “believe women,” are changing their tune, terrified at the prospect of another four years of a Trump presidency. After all, 2016 proved that lugging a litany of sexual assault and harassment accusations does not guarantee an electoral loss. Before the election, at least four women were on record accusing Trump of sexual misconduct. American flags aloft, his fanatical base laughed along with the presidential candidate as he called his accusers liars and implied that they weren’t attractive enough for him to assault. “When you’re a star, they let you do it,” Trump said on the infamous “Access Hollywood” recording. “Grab ’em by the pussy. You can do anything.” This unearthed admission did not cost him the election either.

If Democrats continue to do nothing, Reade’s accusation should prove that sexual misconduct allegations in either party are nothing more than a mild political inconvenience. 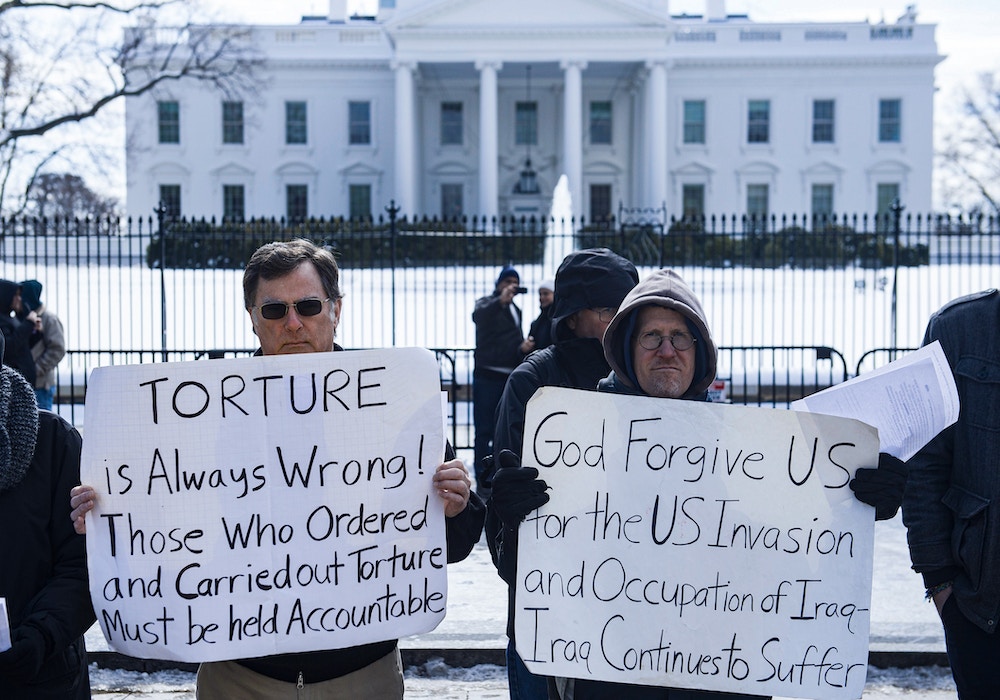 Protestors demonstrating against torture stand in front of the White House in Washington, D.C., February 18, 2015.

The lack of impetus to replace Biden speaks to how Washington, D.C., has long neglected creating a culture of accountability. Some of the darkest chapters of U.S. history have been classified away. Our villainous past remains unprosecuted as bipartisan bombs continue falling. America’s lack of understanding wrongdoing enables figures who should have atoned in order for the country to progress to instead linger in political relevance.

If you supervised torture and destroyed evidence, like Gina Haspel, you can still get promoted. If you’re a war criminal, like George W. Bush, you can be rehabilitated. If you’re a judge, credibly accused of sexual misconduct, like Clarence Thomas and Brett Kavanaugh, you, too, can become a Supreme Court justice.

Now, high-profile Democratic endorsements for Biden signal that a quest for the truth — and a reckoning for the allegations against him — will never come.

The name Lucy Flores may be all but forgotten in an exhausting year of political reporting. Flores was the first to come forward and register publicly that an encounter with Biden made her deeply uncomfortable. In a viral essay, Flores described how, in 2015, then-Vice President Biden made her feel “uneasy, gross, and confused” as she campaigned for lieutenant governor in Nevada.

“I feel him come up close behind me, and that’s when he leans in and he lingers around my head,” Flores recounted on Intercepted. “I hear him kind of inhale. And then he proceeds to plant this low kiss on the top of my head.” (Biden denied that he had acted inappropriately toward Flores.)

Seven more women came forward with similar stories of Biden’s manner of unwanted, inappropriate touching. Descriptions told of how his hands intimately lingered on everything from the women’s necks, shoulders, backs, or thighs. Some say his forehead pressed against theirs. Noses so close that they rubbed together. Breathing in the smell of hair. Kissing the back of the head.

“The bottom line with that kind of behavior is entitlement.”

“The bottom line with that kind of behavior is entitlement,” Gira Grant explained. “Both entitlement to someone’s physical body, but then also entitlement to characterize what happened through whatever lens you have that allows you to continue that behavior.”

Flores was precise in calling out the inequality inherent in how women’s bodies were assumed to be touchable, especially by powerful men. “Most people acknowledge that men don’t usually kiss, smell, rub noses with, place their hands on the thighs of, or touch foreheads with random women they don’t know,” Flores opined in the New York Times. “Yet some men do, especially powerful men, who are protected by privilege and a crew of self-interested enablers who don’t want to lose their access to power by calling out the obvious.” Lucy Flores in the lobby of the office building where she works in downtown Los Angeles, on May 25, 2019.

Photo: Jenna Schoenefeld for The Washington Post via Getty Images

When allegations of inappropriate kissing and touching surfaced against Sen. Al Franken, D-Minn., from seven accusers, dozens of his Democratic Senate colleagues quickly called for his resignation. With a professed zero-tolerance position for any sexual misconduct, Sen. Kirsten Gillibrand, D-N.Y., led the charge. Within weeks, Franken took the incredibly rare step of resigning from his Senate seat.

Biden, apparently lacking a particularly damning enough photograph of misconduct, has been given a pass. And Gillibrand, despite Reade’s allegation, has maintained her support and endorsement of Biden. Democratic National Committee Chair Tom Perez has dismissed the accusations. House Speaker Nancy Pelosi, D-Calif., also “supports Biden.” A day after Business Insider’s investigation further corroborated Reade’s story, Hillary Clinton, too, threw in her high-profile endorsement of Biden.

For Flores, Biden’s conduct that day was “disqualifying.” But, for the Democratic establishment, perhaps fearing both more years of Trump and a Bernie Sanders presidency, Biden’s conduct has been accepted. His character has been troublingly defended by colleagues — especially by women eyeing a vice presidential nomination.

As complaints from women mounted, Biden told reporters last year, “I’m not sorry for any of my intentions. I’m not sorry for anything that I have ever done. I’ve never been disrespectful intentionally to a man or a woman.” With this, Biden revealed an inability to comprehend culpability.

“This is what he’s known for,” Flores told Intercepted. “He is not known for voluntarily or willingly acknowledging that he has made mistakes in the past, whether it’s around his position on the Hyde Amendment, whether it was around how he mishandled the Clarence Thomas hearings, school busing and segregationist policies — I mean, the list is pretty long.”

Biden’s record is long and troubling. Some voters, myself included, are struggling with a moral debate in response to the electoral options before us. We face an impossible choice and feel disgust at being put in this position.

“It’s a mind-fuck.” Gira Grant said, about the inevitable choice between Trump and Biden. “I want to appreciate how that feels and how uncomfortable that is. I think it’s just, like, ripping something back about our culture and our politics and revealing it to us. I don’t think it’s necessarily new.”

“I think it’s just, like, ripping something back about our culture and our politics and revealing it to us. I don’t think it’s necessarily new.”

Yet it isn’t surprising. Biden’s inability to admit fault — he has said, “I am not sorry for anything I have ever done” — simply shows that he is a byproduct of an institution of impunity. America, too, doesn’t do apologies. Reparations for black people and native people are nowhere in sight. We didn’t prosecute torture and we won’t prosecute war crimes. The cancer at the core of this nation is one of fundamental injustice, hidden beneath platitudes of freedom, liberty, and equality for all. To remove Biden would be to indict American exceptionalism itself.

Liberals like Biden, who believe that America’s divisions can be healed by a new president, don’t see this country as built on exploitation. To understand how we heal, we have to view America through the painful lens of wrongs committed. Accountability must be viewed as a feminist issue, especially in a nation that wove oppression into every fiber of its flag.

America should live in shame until we admit fault, recognize hurt, and ask for forgiveness. Joe Biden can go first.