Donald Trump’s campaign to change the subject from the coronavirus pandemic took a bizarre turn, as he used the language of eugenics to praise Henry Ford. Donald Trump’s campaign to change the subject from the coronavirus pandemic took a bizarre turn on Thursday, as the president paused during a speech at a Ford Motor Company plant in Michigan to praise the “good bloodlines” of the family descended from the firm’s founder, Henry Ford, a notorious anti-Semite and favorite of Adolf Hitler.

In an apparent ad-lib, Trump looked up from his prepared remarks — which praised the firm for teaming up with General Electric to produce ventilators and face shields for medical workers — to observe that Henry Ford’s descendants, like the current chairman, Bill Ford, who had introduced the president, have “good blood.”

Trump has made no secret of his own belief that he inherited everything from intelligence to an ability to withstand pressure through the “great genes” passed on to him by his parents and grandparents. He has also frequently compared the importance of “good bloodlines” in humans to the breeding of champion racehorses, a view that overlaps in uncomfortable ways with those of eugenicists and racists like Ford.

Trump has also frequently suggested that because his uncle, John Trump, taught for decades at the Massachusetts Institute of Technology, he is similarly smart. “My uncle was a great professor and scientist and engineer, Dr. John Trump at MIT,” Trump said at a South Carolina rally in 2015. Pointing at his right temple, he then added: “Good genes, very good genes — okay? — very smart.”

Then in March, after he spoke to scientists working on the coronavirus response at the CDC in Atlanta, Trump told reporters: “I like this stuff. You know, my uncle was a great person. He was at MIT, he taught at MIT for, I think, like a record number of years. He was a great super genius. Dr. John Trump. I like this stuff. I really get it. People are surprised that I understand it…. Every one of these doctors said, ‘How do you know so much about this?’ Maybe I have a natural ability.”

Trump also suggested on Thursday that Ford and Edison were both in heaven, “looking down right now.” The president’s belief that Ford, the only American singled out for praise in Hitler’s “Mein Kampf,” should be in heaven was a stark contrast to his sarcastic comment during a visit to Michigan in December that the late Democratic congressman, John Dingell, might be “looking up” from hell.

Among the many reasons to believe that Henry Ford does not deserve a place in heaven is the fact that, as the writer Matthew Wills noted, starting in 1920, “Ford’s newspaper, the weekly Dearborn Independent, which was distributed through Ford dealers and sent free to schools and libraries around the country, published 90 anti-Semitic articles, later collected and distributed as a book called ‘The International Jew.'” 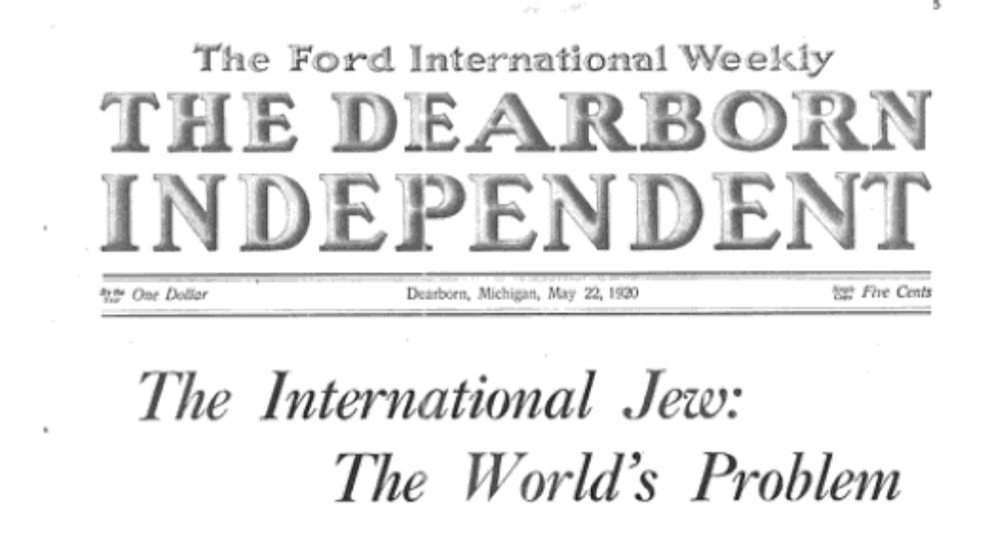 Victoria Saker Woeste, the author of “Henry Ford’s War on Jews and the Legal Battle Against Hate Speech,” explained that “the first article staked out the familiar anti-Semitic trope of ‘The Jew’ as ‘the world’s enigma. Poor in his masses, he yet controls the world’s finances,’ and was, ‘the power behind many a throne.'” The articles recapitulated and excerpted the notorious anti-Semitic forgery, “The Protocols of the Elders of Zion,” for nearly 700,000 readers.

The collected articles were sold as a pamphlet, which was subsequently translated into German, and inspired Hitler’s praise for Ford in “Mein Kampf.” “It is Jews who govern the stock exchange forces of the American Union,” Hitler claimed, “only a single great man, Ford, to their fury, still maintains full independence.”

The New York Times reported in 1922 that Ford’s importance to Hitler was very obvious. “The wall beside his desk in Hitler’s private office is decorated with a large picture of Henry Ford,” the newspaper’s Berlin correspondent observed. “In the ante-chamber there is a large table covered with books, nearly all of which are a translation of a book written and published by Henry Ford.”

Although Ford was eventually forced to sign a public apology for the articles in 1927, after being sued for libel in federal court by Aaron Sapiro, a Jewish-American activist smeared by his newspaper, he remained an anti-Semite and a favorite of the Nazis. In 1938, Ford accepted the Grand Cross of the German Eagle, the Nazi regime’s highest honor for foreigners, on the occasion of his 75th birthday. The two Nazi diplomats who pinned the medal on his chest also brought a personal message of congratulations from Hitler.

In 1940, Steven Watts recounted in “The People’s Tycoon: Henry Ford and the American Century,” Ford told the automobile editor of The Associated Press that he blamed the Jews, not Hitler, for the war in Europe. “I still think this is a phony war made by the international Jewish bankers,” Ford said, in remarks later reported by the automaker’s former personal secretary.

Trump’s praise of Ford on Thursday prompted Jonathan Greenblatt, the chief executive of the Anti-Defamation League, to demand an apology from the president for hailing a man who was “an antisemite and one of America’s staunchest proponents of eugenics.” “If he doesn’t know why,” Greenblatt added, the president should read his organization’s history of Ford’s role as an anti-Jewish propagandist.