Police officers in Buffalo, New York were caught on camera shoving a 75-year-old protester to the ground, injuring him at a protest against police brutality. 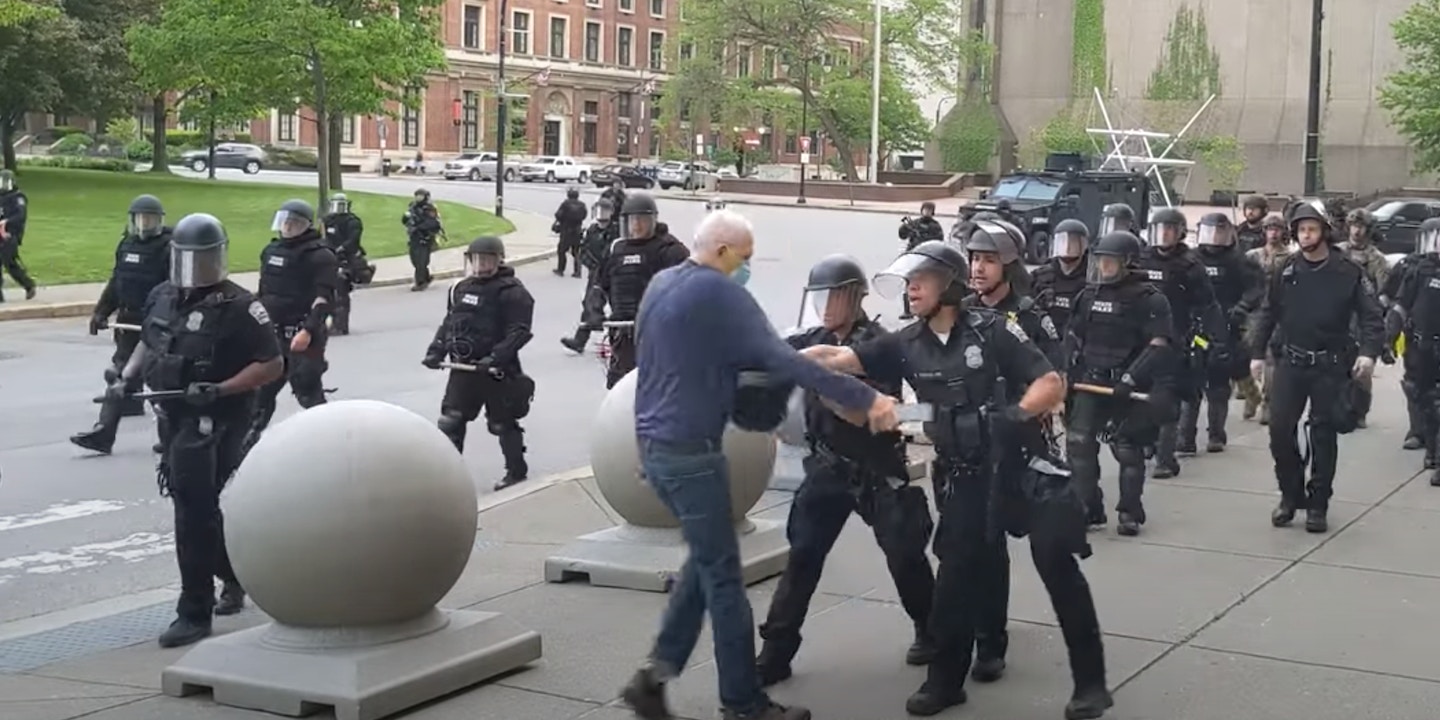 Police officers in Buffalo, New York used excessive force to disperse a protest against police brutality on Thursday, shoving a 75-year-old protester who posed no threat to them so hard that he fell to the ground and sustained a bloody head wound.

Although the incident took place outside Buffalo’s City Hall, in daylight and in full view of witnesses, including at least five journalists, the Buffalo Police Department initially said in a statement that, during a “skirmish involving protestors, one person was injured when he tripped & fell.”

However, that account of what happened was quickly revealed to be a lie. Just over 20 minutes after the police statement was made public, the local NPR affiliate WBFO released distressing video of the incident, which clearly showed that the man only fell to the sidewalk in Niagara Square and hit his head because two officers he tried to talk to shoved him roughly.

Although the masked, elderly man hit his head hard on the pavement, and immediately began bleeding from his ear, one officer who had pushed him was stopped from aiding him by another officer who pushed him toward a younger protester, who was sitting on the city hall steps holding a “Black Lives Matter” sign. None of the other officers made any immediate effort to help the injured man. One officer did, however, order the reporter who was filming the incident, Mike Desmond of WBFO, to clear the area.

The injured man was hospitalized in serious, but stable condition, according to local officials. He was identified as the veteran activist Martin Gugino by his friend Mark Colville, one of seven Catholic anti-nuclear activists affiliated with Plowshares, a nuclear-abolition movement, currently awaiting sentencing for breaking into the Kings Bay Naval Submarine Base in St. Mary’s, Georgia, in 2018, on the 50th anniversary of the assassination of the Rev. Dr. Martin Luther King Jr.

“This is my good friend, Martin Gugino,” Colville wrote on Twitter. “A longtime activist and political thinker; has struggled to close Guantanamo as a member of Witness Against Torture; a man of deep faith who spends much of his free time visiting prisoners in Attica. And he’s battling a catastrophic illness.”

Last week, Gugino posted a YouTube statement addressed to the federal court in Brunswick, Georgia where Colville is awaiting sentencing in support, in which he had cited Martin Luther King’s belief that “the arc of the moral universe is long, but it bends toward justice.” Gugino added: “What he doesn’t say there, is that it doesn’t bend itself; we have to bend it. We have to go out into the culture and act justly, act morally, do good, and little by little it will bend the culture towards justice. And some of the times, the culture doesn’t want to be bent, and so they’ll be conflict, and that’s just part of it.”

Earlier on Thursday, Gugino had tweeted a photograph of an event in Niagara Square at which state and local officials called for police reform. He also wrote that “COVID is a factor,” for protesters against police brutality and racial injustice to consider and noted that he had a cough. “I can take extra measures to counteract” the risk of infection, he added, but noted there is also a risk “of getting pummeled.”

On Wednesday night, Gugino suggested on Twitter that protesters are, or should be, exempt from curfews.

Video of the incident recorded from across the street by a photojournalist named Anthony Nelson showed just how disproportionate the forceful police action to clear the square was. As the 8 p.m. curfew passed, the officers advanced in military formation despite facing just a handful of protesters

About 90 minutes after the close-up video was posted online, and prompted national and international condemnation, the mayor of Buffalo, Byron Brown, announced that the two officers had been suspended without pay, pending an investigation.

Brown, however, appeared to endorse the police perspective that force was required to clear the square. The man was injured, Brown wrote, “after a physical altercation between two separate groups of protesters participating in an illegal demonstration beyond the curfew.” There was no evidence in the videos from the scene of any altercation before the police surged forward at the few protesters who remained in Niagara Square. An earlier demonstration, demanding justice for George Floyd, the black security guard murdered by a white police office in Minneapolis, had ended peacefully, after fist bumps between police officers and protesters.

Erie County Executive Mark Poloncarz issued a more forceful statement than the city’s mayor. “Simply put, the officers must be held responsible for their actions, not just fired,” he wrote on Twitter.

The incident, just one of dozens of examples of excessive force caught on camera in the past two weeks, stirred outrage both because the target was an elderly, peaceful protester and because the initial police statement made it obvious that the incident would have been covered up but for the presence of a witness with a video camera.

The two suspensions were denounced by the president of the Buffalo Police Benevolent Association, John Evans, in an email obtained by Madison Carter of the local ABC News affiliate, WKBW. “I can tell you they tried to fuck over these guys like I have never seen in my 54 years,” Evans wrote. “It is despicable.”

Evans argued that since the officers “did nothing wrong” and were “simply following orders,” he had decided that the association would not pay for the legal defense of any officers from Buffalo’s Emergency Response Team who might be charged with wrongdoing “OVER BULLSHIT… related to these protests going forward.”

Following that email, all 57 members of the police department’s Emergency Response Team reportedly resigned from the unit, although not from the police force. Spectrum News in Buffalo reported that Evans confirmed that the officers had quit their unit “to support the two suspended officers, and in disgust of how the administration is handling the entire incident.”

“These guys did nothing but do what they were ordered to do. This is disgusting!!!” Evans wrote in a public post on the Buffalo PBA website.

“These protest’s/riots should not be taken lightly!!” he added in a text message with idiosyncratic punctuation. “Last nights rioters were from Bflo NY- Not out of towners… We still don’t have a rifle equivalent to the criminals AR’s and AK’s.” (After this article was published, the Buffalo PBA website hid those comments from non-members.)

The injured protester, Martin Gugino, issued a statement through his lawyer on Friday afternoon confirming that he remains in serious but stable condition but is “alert and oriented.”

On Saturday, the two officers who shoved him, Robert McCabe and Aaron Torgalski, were charged felony assault at the Erie County courthouse, just two blocks from the scene of the crime. Outside the court, a crowd of city police officers and firefighters applauded for the indicted officers when at least one of them emerged after pleading not guilty.

Last Updated: Saturday, June 6, 1:56 p.m. PDT
This article was updated on Saturday with video of the suspended officers being cheered by colleagues. It was previously updated on Friday to report remarks from the president of the Buffalo Police Benevolent Association and to note that the injured man was identified as the veteran activist Martin Gugino by his friend Mark Colville, one of seven Catholic anti-nuclear activists affiliated with Plowshares known as the Kings Bay 7.