Donald Trump’s bloodthirsty threat to have protesters in Minneapolis shot echoed the words used by a racist Miami police chief in the 1960s. 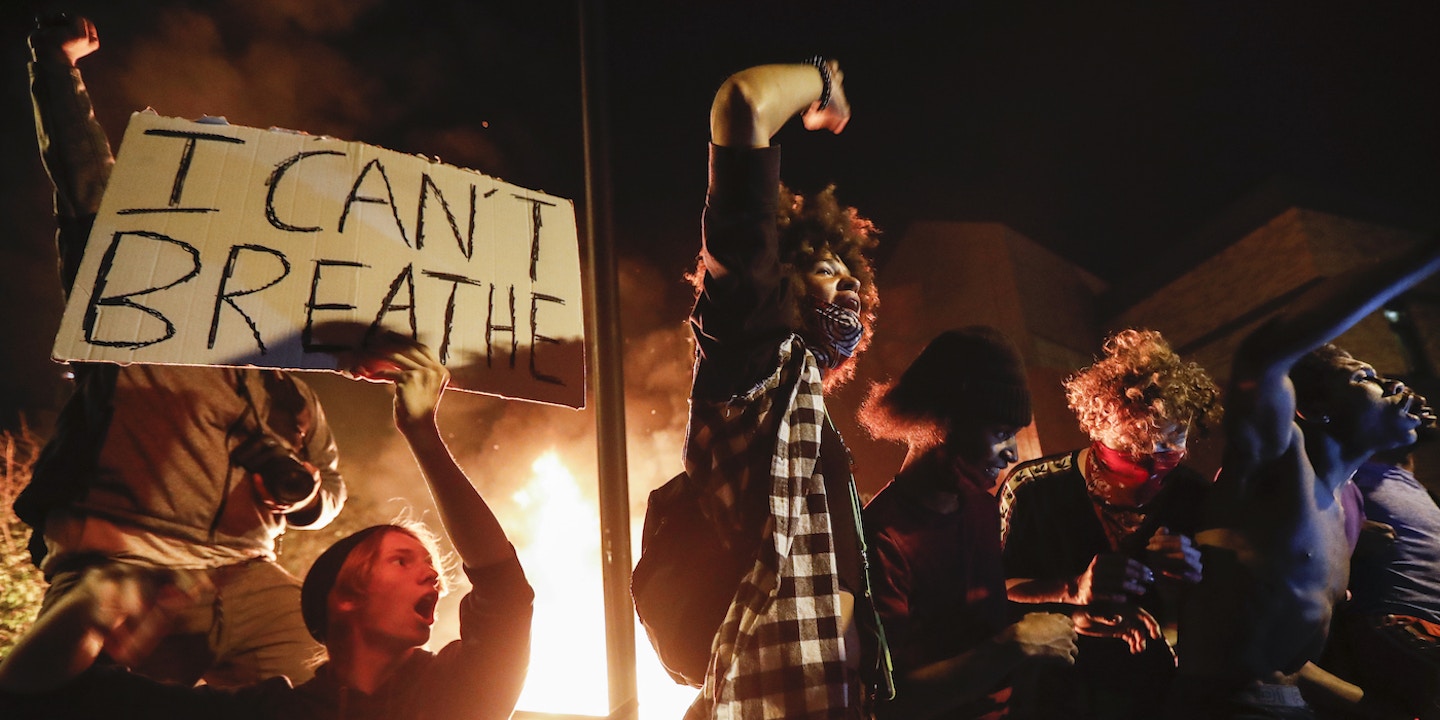 Donald Trump’s bloodthirsty threat to have protesters in Minneapolis shot by the military, issued in a tweet early Friday morning, prompted Twitter to restrict access to the president’s message, ruling that it violated the social network’s policy against “glorifying violence.”

In the tweet, posted just before 1 a.m. Eastern Time, Trump first wrote that “THUGS are dishonoring the memory of George Floyd,” the black man whose killing on Monday by a Minneapolis police officer who knelt on his throat as he gasped for air has prompted protests and rage. The president then threatened to have soldiers open fire unless local authorities in Minneapolis regain control, adding, “when the looting starts, the shooting starts.”

The tweet was soon covered by an initial warning message, which said the president’s comments violated the platform’s rules, but had not been removed because “it may be in the public’s interest” to be able to read them.

A screenshot of a warning appended to a tweet from Donald Trump on Friday morning.

Readers who clicked past that screen were able to read the inflammatory tweet, but with the warning message above it. 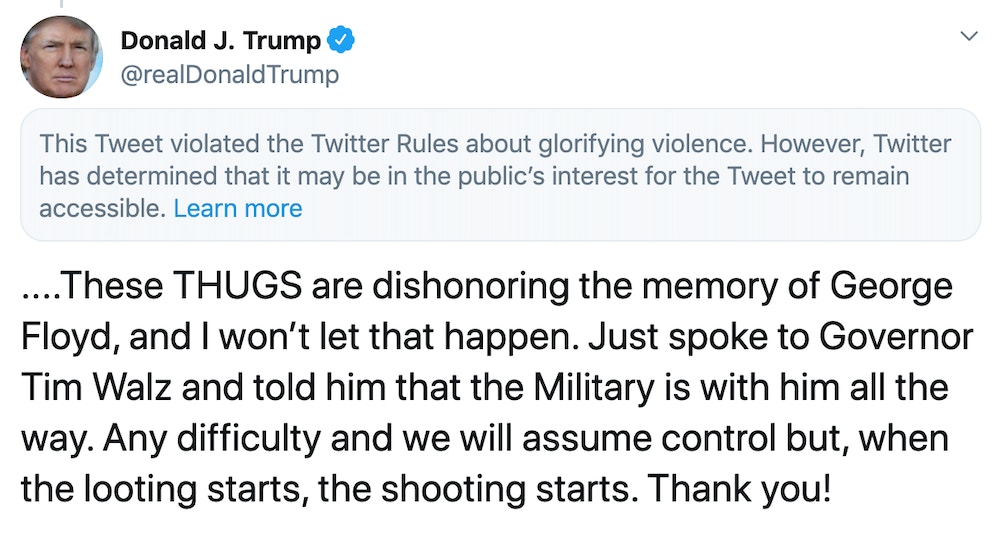 A screenshot of a tweet from Donald Trump, which came with a warning from Twitter about the president’s violent threat.

As Twitter noted in its explanation of why it had added “a public interest notice” to the tweet, that last phrase was even uglier to older Americans who might remember where they first heard it. The words were spoken in 1967 by Walter Headley, a racist Miami police chief, who told reporters that his officers would open fire if looting broke out in the city’s predominantly black neighborhoods.

According to a contemporary news report, from December 28, 1967, when Headley announced that he was declaring war on “young hoodlums, from 15 to 21, who have taken advantage of the civil rights campaign,” he added, “we don’t mind being accused of police brutality.” The goal of his crackdown on Miami’s black community, Headley said, was to unleash “an epidemic of law and order.”

Headley repeated the looting and shooting threat the following year when protests in the Liberty City neighborhood devolved into riots during that summer’s Republican National Convention in Miami, which nominated Richard Nixon for the presidency.

As NPR reports, the pro-segregation presidential candidate George Wallace also used the looting and shooting phrase on the campaign trail in 1968.

The protests in Miami that summer were prompted, in part, by anger over Headley’s “stop and frisk” policy targeting black citizens and his preference for “shotguns and dogs” in the policing of a community demanding civil rights.

As Jonathan Myerson Katz noted, the protests turned violent when a white man drove through a black rally in a car with a “Wallace for President” bumper sticker on the evening of Aug. 7, 1968. The police opened fire with tear gas and bullets. Three people were killed by the police and a black reporter for The Washington Post, Hollie West, was arrested in Liberty City by officers who refused to acknowledge his press credentials.

Trump’s reference to Headley and/or Wallace was unlikely to have been accidental. In 2016, Trump told a New York Times reporter that his own acceptance speech was inspired by Nixon’s in 1968. “I think what Nixon understood is that when the world is falling apart, people want a strong leader whose highest priority is protecting America first,” Trump said. “The 60s were bad, really bad. And it’s really bad now. Americans feel like it’s chaos again.”

“This Tweet violates our policies regarding the glorification of violence based on the historical context of the last line, its connection to violence, and the risk it could inspire similar actions today,” the company said in a thread explaining its decision. “We’ve taken action in the interest of preventing others from being inspired to commit violent acts, but have kept the Tweet on Twitter because it is important that the public still be able to see the Tweet given its relevance to ongoing matters of public importance.”

In line with Twitter’s policy on tweets that it would have removed from the platform but for the public interest exception, the company added that “engagements with the Tweet will be limited. People will be able to Retweet with Comment, but will not be able to Like, Reply or Retweet it.”

The mayor of Minneapolis, Jacob Frey, was asked to respond to the president’s tweet, and an earlier one calling him “very weak,” at a news conference early on Friday.

Frey shook his head in disbelief as the tweets were read to him.

Mayor Frey responds to the President’s tweets: Weakness is refusing to take responsibility for your own actions. Weakness is pointing your finger at somebody else during a time of crisis. Donald Trump knows nothing about the strength of Minneapolis. We are strong as hell.. pic.twitter.com/BtMyjrA6on

“Well, let me say this,” Frey responded. “Weakness is refusing to take responsibility for your own actions. Weakness is pointing your finger at somebody else during a time of crisis. Donald Trump knows nothing about the strength of Minneapolis. We are strong as hell. Is this a difficult time period? Yes. But you better be damn sure that we’re going to get through this.”

Later on Friday, after the police officer seen on video killing Floyd, Derek Chauvin, was arrested and charged with third-degree murder and manslaughter, the mayor described that “as an essential first step” in a tweet of his own.

The man who killed George Floyd has been charged with murder. This an essential first step on a much longer road toward justice and healing our city.

Trump, who had been expected to address the killing of Floyd, and his own provocative taunt, at a White House news conference, instead confined his remarks to inflaming tensions with China, by changing the terms of the U.S. relationship to Hong Kong and declaring a full withdrawal from the World Health Organization, before departing without taking a single question.

The President escapes his own press conference to evade questions on Minneapolis pic.twitter.com/e7jKzlvlTL

His administration did, however, devote some time to trying to dodge the Twitter restriction, by using the White House Twitter feed to quote the president’s inflammatory rhetoric. That White House tweet was soon restricted too, with the same warning label.

Lori Lightfoot not holding back on Trump! pic.twitter.com/rNOVT8D42N

“His goal is to polarize, to destabilize local government and inflame racist urges,” she added. “And we cannot, absolutely not, let him prevail. And I will code what I really want to say to Donald Trump. It’s two words, it begins with ‘F’ and it ends with ‘you.’ I will not remain silent while this man cynically tries to turn this incredibly painful moment into one for his own political gain.”

Twitter’s decision to draw a line for Trump came just hours after he issued an executive order threatening to make it easier for users to file lawsuits against the company for perceived political bias. The order was a transparent act of retaliation against the company for having appended a fact-checking note to a tweet in which Trump made a range of false claims about plans for California to make it easier for registered voters to vote by mail during the ongoing pandemic.

“The First Amendment protects Twitter’s right to respond to the president’s speech, including by attaching warnings to tweets that glorify violence,” Jaffer said in a statement sent to The Intercept. “Fundamentally this dispute is about whether Twitter has the right to disagree with, criticize, and respond to the president. Obviously, it does. It is remarkable and truly chilling that the president and his advisers seem to believe otherwise.”

Jaffer’s colleague Katie Fallow, a senior attorney at the First Amendment Institute, noted that unusual language that appeared to have been added to the order without much review, “make the retaliatory motive even clearer.”

“Twitter now selectively decides to place a warning label on certain tweets in a manner that clearly reflects political bias,” one part of the order reads. “As has been reported, Twitter seems never to have placed such a label on another politician’s tweet.”

What’s odd, as Fallow notes, is that the order references “another politician” without saying that the first politician it is concerned with here is Trump, although that is quite clear from the context. Another less than subtle hint is that the order throws in a gratuitous attack on the company’s failure to label tweets by Rep. Adam Schiff, who led the impeachment of Trump, in which he supposedly “mislead his followers by peddling the long-disproved Russian Collusion Hoax, and Twitter did not flag those tweets.”

Updated: Friday, May 29, 12:45 p.m. PDT
This article was updated with a new headline and more details about the events on 1968, and to report the arrest of the police officer who killed George Floyd, as well as new comments from the mayors off Minneapolis and Chicago, and President Donald Trump’s failure to take any questions during a White House news conference.