Whatever impacts the protests have on coronavirus infection rates, they won’t match the massive measurable health toll of racism on communities of color. 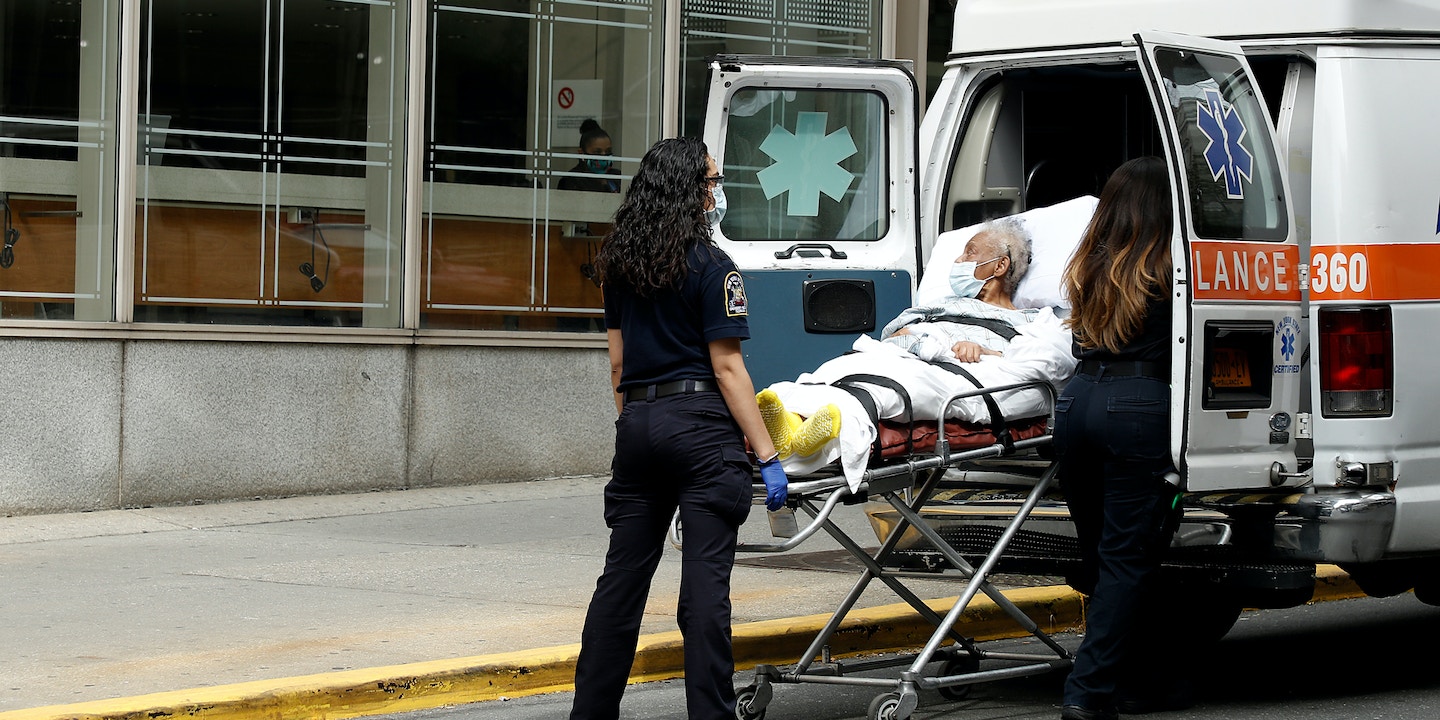 The dangers posed by hundreds of people standing shoulder to shoulder, marching, chanting, and sometimes frantically fleeing police violence together during a pandemic are real. And it may be true, as some public health experts have predicted, that the weeks of protests over police brutality that have swept the country — and the world — in the wake of George Floyd’s murder will be followed by a new wave of coronavirus infections. It hasn’t helped that police have been flouting the requirement to wear masks, not to mention shooting, clubbing, pepper-spraying, tear gassing, beating, and killing protesters.

Yet whatever possible impacts the protests have on Covid-19 infection rates, which should be clear within a matter of weeks, they probably won’t match the massive measurable toll that the virus has already wrought on communities of color. Black people in the U.S. are now dying of Covid-19 at 2.4 times the rate of white people. If the virus had affected them at the lower rate at which it killed white people over the past few months, 13,000 black Americans would still be alive. In New York City, the hardest hit part of the country, Latinos are dying at an even higher rate than African Americans. Nor will any jump in deaths from new coronavirus infections due to the protests come anywhere near 75,000: the most conservative estimate of the number of black people who suffer preventable deaths, or “excess premature deaths,” each year according to a 2014 study.

There are several reasonable theories about why the virus has served up its worst misery along racial lines. White people in the U.S. are more likely to be able to work from home, less likely to have the essential jobs that put them in contact with other people, and less likely to live in crowded households. In New York, they’re also more likely to have skipped town and escaped the areas where the risk of contagion was greatest.

But the coronavirus has hit black and brown people hardest in large part because they were already more likely to be in poor health due to systemic racism, as Jacqueline Patterson, senior director of the environmental and climate justice program of the NAACP, told members of the House Energy and Commerce Committee on Tuesday. Racism is “a throughline that imperils us at every turn, not just in extreme circumstance such as disasters, but merely when we are walking in a park, making a purchase in the store, jogging down the street, sleeping in a dorm hallway, sleeping in our own bedroom in our own homes, or just breathing air,” Patterson said at the virtual hearing of the committee, which focused on the disproportionate impact of Covid-19 on environmental justice communities.

Throughout the more than three hours of testimony and questions, Patterson and Mustafa Santiago Ali, a vice president at the National Wildlife Federation, explained why so many African Americans across the country were struggling to breathe well before the coronavirus hit. Black people are more likely to live near polluting facilities, more directly impacted by the burning of fossil fuels, more likely to lack clean water, more likely to have and die from asthma, and have the highest death rate for most cancers.

African Americans’ greater burden of air pollution offers perhaps the most logical explanation of their higher Covid-19 death rates. Compared to the overall population, black Americans are exposed to 1.5 times more particulate matter, tiny bits of the microscopic air pollution that can make Covid-19 more deadly, according to an April study from researchers at the Harvard School of Public Health.

While pollution particles clearly damage the lungs, which are also a main target of the new coronavirus, the root cause of the disproportionate exposure to this pollution is the same systematic injustice that led to Floyd’s death. “Black communities are dealing with the systemic racism that has infected the policing in our communities that is literally choking us to death,” said Ali, who worked on environmental justice at the Environmental Protection Agency for 24 years and left after Trump took office. Ali pointed out that, by reversing 100 environmental rules, the current administration is showing the same disregard for health as some violent cops — and having some of the same effects. “The rolling back of environmental rules and regulations has us gasping for air,” said Ali. “When we say, ‘I Can’t Breathe,’ we literally can’t breathe.” 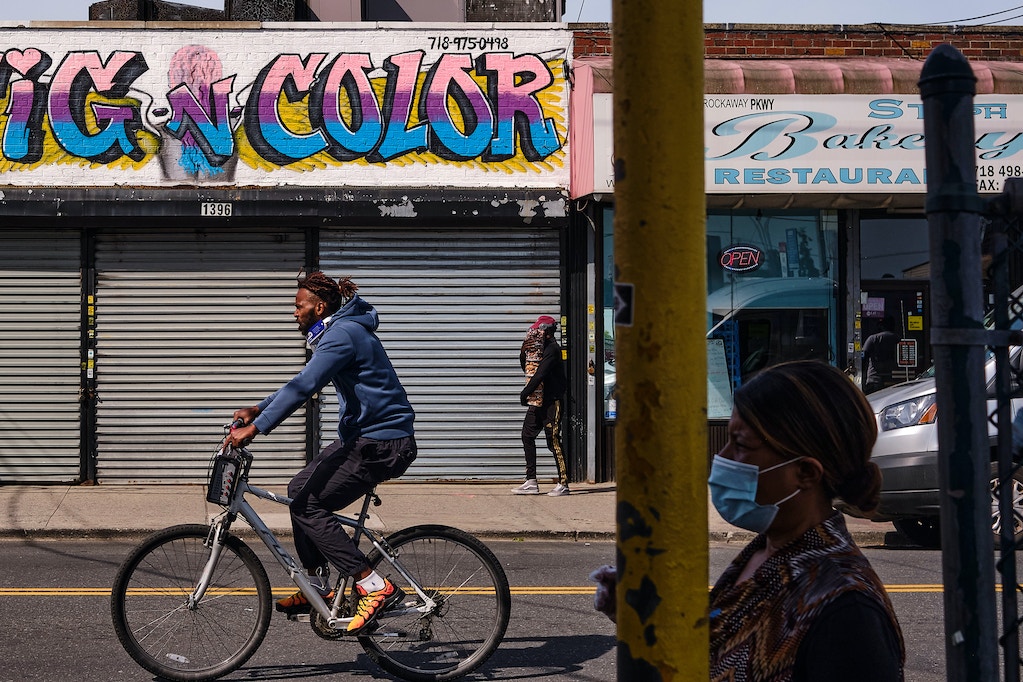 People on a Rockaway Parkway in Canarsie, Brooklyn, on Tuesday, May 19, 2020.

While hard-hit communities generally have higher rates of conditions that leave them particularly vulnerable to the coronavirus, such as hypertension and diabetes, they also often have higher rates of seemingly unrelated health problems. In New York City, the neighborhoods with the highest Covid-19 death rates suffer higher burdens across the board than the least affected areas. In Canarsie, the neighborhood with the very highest death rate from the virus — 628 per 100,000 people — infant mortality is more than six times that of the area with city’s lowest rate, Greenwich Village/Soho, according to New York City’s most recent Vital Statistics. The homicide rate in Canarsie is 15 times the city’s lowest rate, which is on the Upper East Side. In Coney Island, which has the city’s third highest virus death rate, the rate of drug-related deaths is four times higher than on the Upper East Side. In Far Rockaway, which has the second highest death rate from the virus, life expectancy is 76.9 years: almost 10 years shorter than the 86.7-year average in Greenwich Village/Soho.

Yet during the pandemic, efforts to put the risks of the protests in the context of these greater forces that leave people of color more vulnerable to all sorts of health threats — from police violence to the new coronavirus and the underlying health problems that make them more vulnerable to it — have met with fierce backlash. After more than 1,000 infectious disease experts signed an open letter laying out safe guidelines for protesting and calling for the recognition of white supremacy as a public health issue on May 31, the conservative legal blog the Volokh Conspiracy accused the health experts, many of whom supported the protests after calling attention to the health threats posed by pro-Trump reopening rallies in April, of being hypocrites.

Epidemiologist Gregg Gonsalves, who signed the letter and has expressed sympathy for the protesters against police violence, was called much worse. “Over the past week, I’ve gotten many ‘die fag’ emails,” Gonsalves tweeted on Monday after he told Roll Call that any new infections that the protests might generate paled in comparison to the larger drivers of the epidemic. On Twitter, Gonsalves has made it clear that because elected officials have failed to adequately respond to Covid-19 outbreaks in jails, prisons, meatpacking plants, and nursing facilities, “we’ve all been put at far more jeopardy during this pandemic by our political leaders than by the people on the streets over the past week or so.”

Gonsalves says that while he can’t control whether there are mass protests, he can help the people who attend them stay as safe as possible. He advises wearing face masks, using hand sanitizer, staying in a small circle of friends rather than milling about, using drums rather than shouting, as well as getting tested for the coronavirus and self-isolating if possible after protesting.

That approach — to recognize that some people will inevitably take risks and to try to minimize them — was one he learned from decades of AIDS activism. After the discovery that HIV was transmitted sexually, “the choice was never have sex again for the rest of your life, or figure out some way through it,” Gonsalves told me. This time, as anger about systemic racism has exploded into mass street activism, risk is also inevitable — and mitigation is necessary.

“It’s not about bubble wrapping ourselves until we have a vaccine. We’re going to have to find a way of risk reduction or harm reduction akin to safer sex. Let’s call it safer living,” said Gonsalves. With no end in sight for either the pandemic or the racism that’s fueling it, that advice will apply far beyond the protests. “We’re all just trying to figure out how to survive a plague.”