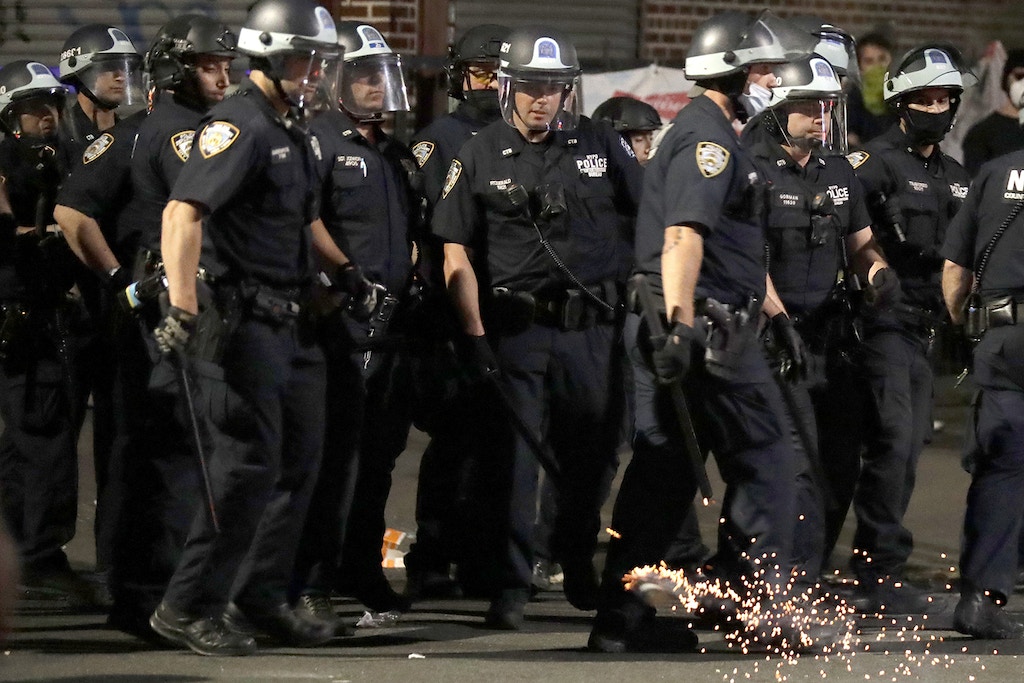 Police officers react as a firework is thrown in their midst during a protest in Brooklyn, N.Y., on May 30, 2020.

A few nights ago, while walking home in the Crown Heights neighborhood of Brooklyn, New York, I had to jump away from the flares of a small firework, crackling in the intersection by my apartment. The young guys who’d set if off were skipping back from the sparks too. I laughed, they laughed, and I went home. I did not ask where or how they’d procured the pyrotechnic, because I’m not in the habit of asking people where they get access to contraband.

I understand that many New Yorkers are less sanguine about the dramatic spike in amateur fireworks booming throughout the city nightscape. According to city data, there were 1,680 complaints about illegal fireworks in New York between June 8 and June 15, compared to just 12 for the equivalent period last year. Yet, from the sounds of the sky, such complaints are equaled by the desire for the displays after months of pandemic lockdowns, in the wake of nightly explosions of righteous antiracist rage against the police.

I would never ask anyone disturbed or bothered by the fireworks to simply embrace them, nor do I expect people to be incurious about the provenance of a once-rare phenomenon that has now become the soundtrack of a New York night. I insist, however, that those who demand a cessation of — and an explanation for — the vast fireworks uptick understand that the law enforcement crackdown against the activity will be far more dangerous and devastating than any sleepless night or misused Roman candle.

There is some irony to the fact that curiosity about the fireworks gave rise to a flurry of conspiracy theories. The fireworks were seemingly too plentiful, too expensive, too inaccessible, too professional — they had to be psy-ops, stings, or statecraft of some sort. Twitter theorizing abounded. But now the threat of law enforcement entrapment, violent sweeps, and typical brutality is all too real in response to activities, which are, for the most part, joyful diversions in a fraught time.

Even though the state has indeed carried out more devious operations to disable social movements and sow distrust, there are more parsimonious explanations for the booming blackmarket than “psy-ops.” Fireworks retailers in neighboring states, where selling is legal, are offloading their goods for cheap prices, having lost a huge amount of business through the cancellation of major public summer events due to the pandemic. Individuals and groups are scooping up the deals and bringing back big hauls to the city to sell.

Like any social phenomenon, different groups are setting off fireworks for different reasons. But we’re broadly seeing a constellation of letting off steam, expressing solidarity with ongoing protests for Black life, entertainment, community, excitement, and fun. Whatever dangers are involved — and they are not negligible — they are dwarfed by the state violence now promised in response.

“This is not just a quality of life problem and a noise problem — and it’s certainly that, and in all five boroughs, we take that seriously — but it can also be dangerous,” de Blasio said in his Tuesday press conference. “We’re going to start a huge sting operation to go and get these illegal fireworks at the base. Meaning, everywhere they’re being sold around New York City, and even where they’re being sold in surrounding states that we know of flowing into New York.”

His choice of words is significant. When a politician invokes “quality of life” as a grounds for a policing initiative, he calls upon the violent “broken windows” strategies that have informed the brutal criminalization of poverty and Blackness in the U.S. since the 1980s. “Quality of life” policing entails aggressive crackdowns on any activities working-class, poor, often unhoused, and marginalized individuals engage in to survive, get by, and find comfort or even small pleasures. Public drinking, loitering, street-level drug dealing, sex work, walking while Black and trans.

When a politician invokes “quality of life” as a grounds for a policing initiative, he calls upon the violent “broken windows” strategies that have informed the brutal criminalization of poverty and Blackness.

It is unambiguous whose “quality of life” is considered here. For wealthy, white, and propertied people to live without the eyesores of poverty that prop up their privilege, the “quality” of poor and marginalized peoples’ live must be shaped by racial profiling, imprisonment, and constant, potentially deadly encounters with police. Meanwhile, impunity is consistently accorded to middle-class and wealthy white people who engage in the very same activities.

I’m not suggesting that it is only privileged white people complaining about the fireworks, nor that only working-class or poor people of color are lighting them. But there can be no doubt about which communities will be targeted by the violence of the city’s new task force.

However much of a nuisance some New Yorkers might find the fireworks to be, a law enforcement crackdown on them is yet another state attack on Black joy. The New York Police Department has already offered us a taste: Last Monday night, in response to complaints, a phalanx of officers in full riot gear stormed a block in Brooklyn’s Flatbush area, blocked off a street, threatened bystanders with arrest, and detained at least one person. It was a continuation of the hyperaggressive police response in the very same area, and beyond, in previous weeks as protesters took to the street in defense of Black lives.

A local community organizer and anti-gentrification activist, Imani Henry, told BuzzFeed News that the fireworks displays in Flatbush — which had spurred the militarized police response — were part of a “moment of power and resistance, because people have been beaten up and fighting the cops all day. It lifted our spirits. This was 10 or 11 at night, and it was beautiful.”