Chechnya Is Trying to Exterminate Gay People. Our Silence Only Emboldens Vladimir Putin and Ramzan Kadyrov.

A new film, “Welcome to Chechnya,” documents the torture, disappearances, and extrajudicial killings of gay men in the Russian republic. 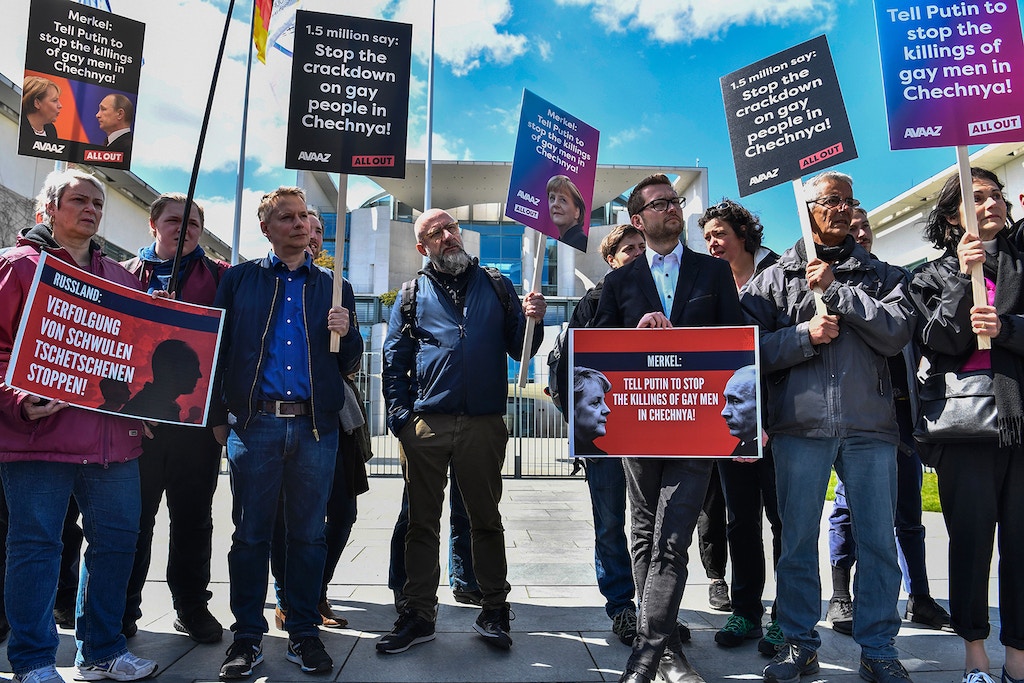 Activists display placards in front of the Chancellery in Berlin on April 30, 2017, during a demonstration calling on the Russian president to put an end to the persecution of gay men in Chechnya.

Torture. Rape. Murder. I cannot get the gruesome images of these brutal crimes out of my head. “Welcome to Chechnya: Inside the Russian Republic’s Deadly War on Gays,” which premiered at the Sundance Festival in January and airs on HBO next week, is one of the most harrowing films I have ever seen.

“Imagine in the 21st century, in a supposedly secular country,” says David Isteev, at the start of this acclaimed documentary, “you have cases where people are killed simply because they are homosexual — where they are maimed, where the families of these people are urged to kill their children and siblings. It’s unreal.”

“Welcome to Chechnya” follows Isteev, emergency program coordinator for the Russian LGBT Network, and his fellow activists as they risk their lives trying to protect gay Chechens from being targeted both by the authorities and their own families.

Chechnya is a small Muslim-majority republic in southwestern Russia. It is also a place where gay people live in terror. Since 2017, there have been a series of state-sponsored anti-gay purges across Chechnya, in which hundreds of gay men have been arrested and detained in secret prisons. The purges were first revealed by the independent Russian newspaper Novaya Gazeta in April 2017 and later corroborated by Human Rights Watch, among others.

“We documented a large-scale, vicious, anti-gay purge” marked by  “torture, enforced disappearances, and extrajudicial killings,” Tanya Lokshina, the Russia program director at Human Rights Watch, told me in a phone interview from Moscow. In 2017, a detainee told Human Rights Watch, “They electrocuted us, beat us with pipes, kicked us, and punched us, they made other inmates beat us, they called us names, spat in our faces.”

In December 2018, there were reports of a second wave of arrests and attacks against gay Chechens. Yet there has been little coverage of their plight over the past 18 months. For David France, the award-winning director of “Welcome to Chechnya,” it makes no sense to talk of a “first” or a “second” purge, as it is all part of a single ongoing campaign of persecution against gay Chechens. “They are still being hunted,” France told me in a phone interview from New York.

The hunter-in-chief is Ramzan Kadyrov, a thuggish, tiger-loving autocrat who was installed as president of Chechnya by Russian President Vladmir Putin in 2007. Kadyrov, Lokshina said, “has been enabled by the Kremlin to run Chechnya as his own fiefdom, effectively as a state within a state, where international human rights law, and even Russian legislation, is not taken into account.”

Like every good tyrant, Kadyrov has a list of “undesirables” who are demonized and scapegoated for all of the country’s problems — and top of his list are gay people. It is the Chechen leader who ordered the rounding up and detention of gay men, who he calls “subhuman” and “devils.” In recent years, he has also been “justifying and encouraging” so-called honor killings of gay Chechens by their families while his administration, France explained to me, refuses to prosecute such crimes.

In an interview in July 2017, HBO sports reporter David Scott asked Kadyrov about the anti-gay pogroms in his country. “We don’t have those kinds of people here,” Kadyrov responded. “We don’t have any gays. If there are any, take them to Canada.”

“Praise be to god,” the Chechen president added. “Take them far from us, so we don’t have them at home. To purify our blood, if there are any here, take them.”

Kadyrov has been welcomed with open arms across the Middle East. The Chechen strongman likes to portray himself as a devout Muslim and has clamped down on alcohol while enforcing Islamic dress codes and endorsing polygamy. He sees his war on gay people as part of his “Islamization” project. France described him to me as a “madman and a despot” who “bends Islam to his own use.”

To be clear: There is nothing in Islam that justifies or excuses the torture or persecution of any group of human beings. Yet the fact of the matter is that homophobia, as I have written previously, is rife in many Muslim communities across the world. Chechnya, though, is in a gay-hating league of its own. As Human Rights Watch has noted, the Russian republic “is a highly conservative, traditional Muslim society; homophobia is intense and rampant, and homosexuality is generally viewed as a stain on family honor.”

Last March, more than 30 countries signed a joint statement at the U.N. Human Rights Council calling for “a swift, thorough and impartial investigation into the alleged persecution” of gay people in Chechnya. With the exception of Albania, not a single Muslim-majority country signed onto the statement. Meanwhile, Muslim communities across the West fundraise and lobby for persecuted Palestinians, Kashmiris, Rohingya, Uighurs … but not Chechens being “hunted” by Kadyrov and his goons. Those Chechens, it seems, are the wrong kind of Muslims — they are gay Muslims.

The vicious pogroms against gay men in Chechnya, however, cannot only be laid at the door of Islam or Muslims. Russia itself is plagued by homophobia — encouraged both by the Russian Orthodox Church and the country’s president. “It’s obvious where Putin stands,” a frustrated Russian LGTBQ activist says in “Welcome to Chechnya.” “If they told him that gays were being killed, he wouldn’t give a damn.” In 2013, Putin signed the now-notorious “gay propaganda” law, which criminalized the distribution of “propaganda of non-traditional sexual relationships.” Polls suggest a majority of Russians believe gays are conspiring to “destroy” the country’s values, while 1 in 5 of them want to “eliminate” gay and lesbian people from Russian society.

Then there is the global context: As the director, France, reminded me, homosexuality remains illegal in more than 70 countries across the world and is punishable by death in eight of them.

Is it any wonder, then, that activists talk of a “gay genocide”? In May 2017, in fact, three French gay rights groups filed a complaint at the International Criminal Court accusing Chechnya of a policy of genocide against gay people. The legal problem, though, as France points out, is that the Genocide Convention applies only to “national, ethnical, racial, or religious” groups, thereby excluding persecuted LGBTQ communities.

Nevertheless, France draws a direct comparison with the Holocaust. “This is the first time since Hitler’s regime that there has been an open, government-directed policy to round up and liquidate LGBTQ people,” he told me. Between 1933 and 1945, according to the U.S. Holocaust Memorial Museum, “an estimated 100,000 men were arrested for violating Nazi Germany’s law against homosexuality, and of these, approximately 50,000 were sentenced to prison. An estimated 5,000 to 15,000 men were sent to concentration camps on similar charges, where an unknown number of them perished.”

“Never again” has (rightly) become the global mantra, in reference to the Holocaust. But, with regard to gay people, it is happening again. Right now. In Chechnya.

So where, today, is the outrage from our politicians or the press? Where are the protests? Why the lack of global support for this repressed minority? As Lokshina pointed out to me, most Western countries have failed to provide a “safe haven” for gay Chechens fleeing persecution. The United States under Donald Trump may have imposed financial sanctions on Chechen leaders, for example, but it hasn’t admitted a single LGBTQ refugee from Chechnya.

Remember, our inaction, our indifference and, above all else, our silence makes us complicit in these crimes against LGBTQ communities. But it’s much worse than that. Our silence also emboldens brutal demagogues like Putin and Kadyrov — and lays the groundwork for further human rights abuses across the board. “If there’s no punishment,” says an exhausted-looking Isteev toward the end of the film, “if LGBT people are regarded as subhuman, if you can do anything to them, it means that tomorrow, anyone can find themselves in the shoes of gay Chechens.”

“Welcome to Chechnya“ airs on HBO on June 30.