The Alamance County Sheriff’s Office threatened to arrest all protesters in the city of Graham, where a statue of Confederate soldier stands. 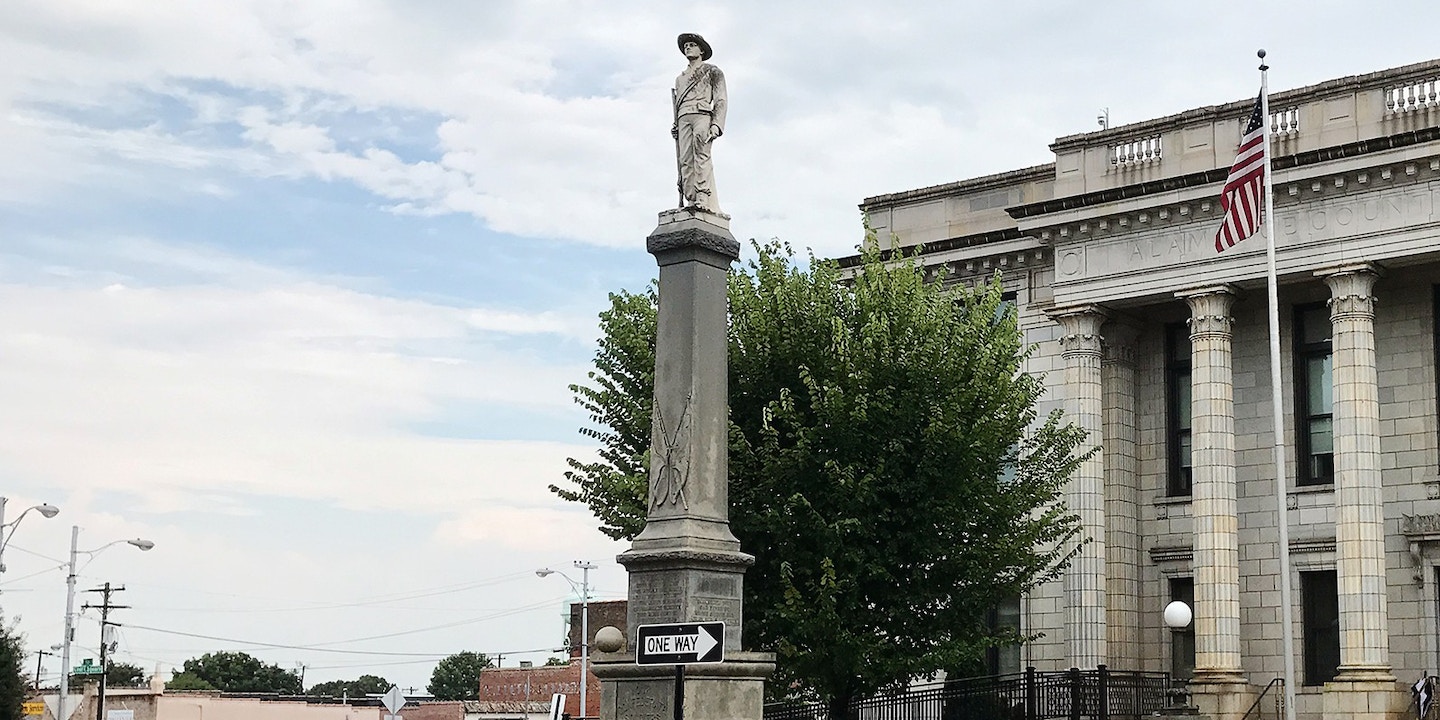 A North Carolina city is using a restrictive ordinance to outlaw protest, threatening to arrest anyone who even attempts to peacefully protest without a permit, as part of an effort to protect a Confederate monument that sits outside its courthouse.

The Alamance County Sheriff’s Office said in a Facebook post on Friday that permits to protest in the city of Graham will not be granted for the foreseeable future, adding that anyone who attempts to protest without a permit will be in violation of the order and arrested. There has been a heavy police presence around the monument, which features a statue of a Confederate soldier with a rifle, located in downtown Graham, for several days now. Graham, whose population is around 15,000, also declared a state of emergency and set a 9 p.m. curfew over the weekend, which was then canceled on Monday night.

Heavy police presence around the Confederate monument in Graham, NC. A citywide protest ban is in place with a 8 pm curfew. Local Confederate supporters staking out the monument after arrest earlier in day of man w/ “Black Lives Matter” sign. pic.twitter.com/z1TeHDc9nZ

As of June 27, the Graham Police Department had arrested one person for “resisting, delaying, or obstructing” an officer and “failure to disperse.” The Graham police said a group of protesters had planned an event at the courthouse on this day, but ended up canceling after they were denied a permit. They then received “intel” about a separate group that was planning to hold a demonstration, according to a statement, which resulted in the arrest.

On Thursday, nearly 200 people gathered in downtown Graham for a silent protest but left in compliance with the curfew. They were careful to avoid any wording that could be construed as a protest or a demonstration in the flyer for the event, Triad City Beat reported. Local protesters say that the police have been aggressively questioning people who they think might protest and telling them that they aren’t allowed to carry signs, while letting armed, neo-Confederate supporters gather in large numbers around the monument.

The American Civil Liberties Union of North Carolina said this is unconstitutional, as the combination of the emergency order, restrictive ordinance, and refusal to grant permits amounts to a “complete ban on protest and lawfully protected speech.”

The ACLU is calling on the city to retract the order and “publicly reaffirm” the right of protesters to demonstrate without a permit. In a letter addressed to Alamance County Sheriff Terry Johnson, the ACLU, along with groups like the Lawyers’ Committee for Civil Rights Under Law and Emancipate NC, wrote that the city’s refusal to issue permits is a “grossly overreaching attempt to broadly and indefinitely suppress all speech and assembly in Graham.”

“Your threat to arrest people for protesting without a permit, as well as the indefinite blanket refusal to issue permits, violates the most fundamental constitutional rights to assembly, speech, and to be free from unlawful seizures and use of excessive force without due process of law,” the letter said. “We demand that you immediately issue a retraction and clarify that residents are able to exercise their constitutional rights to be free from arrest and harassment.”

Irena Como, senior staff attorney with the ACLU of North Carolina, said the current situation leaves “too much discretion to law enforcement to decide what speech is allowed and what is not.” The ordinance defines protesting as gatherings of two or more people, Como noted, saying that in practice, it means that two people wearing Black Lives Matter shirts in front of the monument, for example, would be in violation — unless their permit was approved 24 hours in advance.

The nationwide protests against police violence, sparked by the killing of George Floyd in Minneapolis, have resulted in the removal of several Confederate statues and monuments across the country. Protesters have vandalized and successfully toppled statues in places like Richmond, Virginia, and St. Paul, Minnesota, while elected officials in a number of cities also are making plans to remove the racist symbols.

Dozens of Alamance County officials, including mayors and school board members, have called for the Confederate monument to be removed, as local media outlets report. But the Alamance County Board of Commissioners said it doesn’t have the legal authority to move the statue, which stands on the North Carolina Department of Transportation’s property.

The statue was unveiled in May 1914. At the monument’s ceremony, the News & Observer noted, Confederate veteran Jacob A. Long, who also founded the county’s Ku Klux Klan branch, told the audience that they “have a common interest: to recall the achievements of the great and good of our own race and blood.” The monument is also standing at the site of the KKK lynching of Wyatt Outlaw in 1870, Graham’s first Black town commissioner.

“Without a lawful order to remove the confederate memorial or any other property belonging to Alamance County, I am charged with the duty of protecting that property,” Johnson said in a statement.

The ACLU of North Carolina has received complaints about the sheriff’s office for years. In 2012, the Justice Department filed a civil rights lawsuit against Johnson, saying that deputies intentionally and disproportionated targeted Latinos. Johnson, who has served as sheriff since 2002, was accused of calling on his deputies to “bring me some Mexicans.” In the end, a federal judge acknowledged the agency’s use of racial slurs, but dismissed the lawsuit.