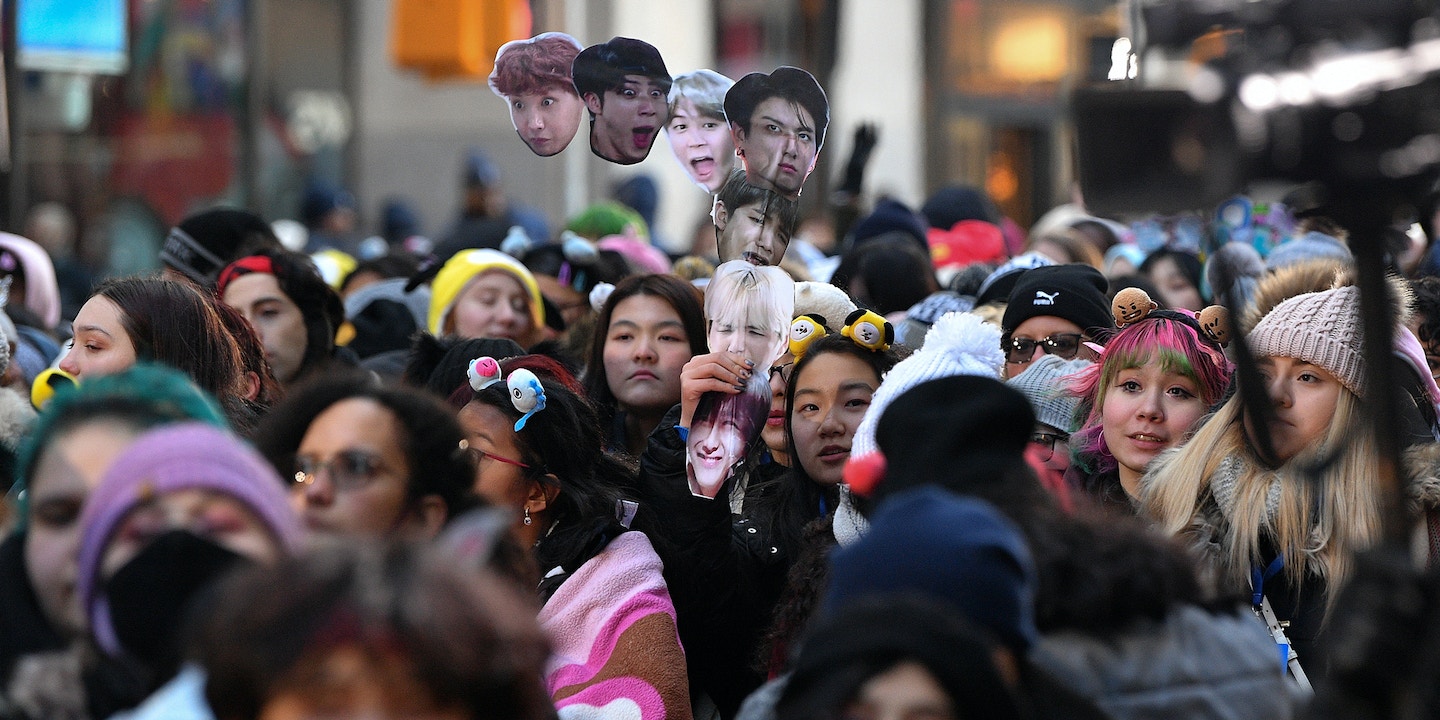 As the nationwide protests gained prominence after George Floyd’s murder by Minneapolis police, fans of Korean pop music, or K-pop, raised eyebrows after jamming an app released by the Dallas Police Department called iWatch Dallas, which was meant to be a portal to submit videos of protesters. K-pop fans instead flooded the app by submitting “fancams,” or videos of performances featuring a particular K-pop star or group. Within hours, the app was shut down due to what the police department said was “technical difficulties.”

In the following days and weeks, fans flooded right-wing hashtags on Twitter like #WhiteLivesMatter and #WhiteOutWednesday with fancams, drowning out any serious engagement with those hashtags from white supremacists.

Most recently, K-pop fans and TikTok teens were among those who reserved tickets to Donald Trump’s rally in Tulsa, Oklahoma, last weekend, only to not show up.

Even now, look under #ItsOkayToBeRacist, which was trending last week, and you will find fancams of Korean artists like V of the seven-member boy band BTS (Bulletproof Boy Scouts, in English), or Han from the group Stray Kids. This week, K-pop fans continue to obfuscate #AllLivesMatter with fancams of j-hope of BTS and the girl group Red Velvet, to give a few examples. Among the most visible and widely coordinated effort in previous weeks was the #MatchAMillion campaign, in which BTS fans, which call themselves ARMYs, matched BTS’s $1 million donation to organizations supporting Black Lives Matter in about 24 hours. (Disclosure: The author of this article also participated in #MatchAMillion.)

The coordination was hailed in the media as a surprising and new phenomenon, and Rep. Alexandria Ocasio-Cortez, D-N.Y., called K-pop fans “allies” for their contribution in sabotaging the rally attendance. But K-pop fans, while extremely well-organized, are hardly a monolith. We can expect to see more fans continuing to take action online and advocate for issues they care about, whether it’s the environment or mental health awareness or Black Lives Matter; initiatives have gotten significant support thanks to fans using their networks to encourage others to donate. But their activism won’t easily be harnessed to anyone’s agenda — and the fandom itself is dealing with internal issues of harassment and racism.

The glorification of K-pop fandom among liberal political interests and media, writes Abby Ohlheiser in MIT Technology Review, “means that K-pop stans and TikTok teens are fast becoming to liberals what 4chan is to older Trump supporters: an army of anonymous internet warriors they love to praise but don’t really understand.” Supporters wait for the start of a campaign rally for Donald Trump at the BOK Center on June 20, 2020, in Tulsa, Okla.

The Tulsa rally wasn’t the first time K-pop fans have used their online presence to make a political splash. Late last year in Chile, as protests against the rising cost of living and police brutality continued for months, the Chilean government released a “Big Data” report that directly cites K-pop fans as “foreign influence” for fueling the protests. Protesters in Chile and Algeria attended demonstrations with signs containing K-pop memes, and even reappropriated lyrics from songs by groups like NCT DREAM and Girls’ Generation for their own protest slogans.

In the U.S., where the K-pop fandom is very diverse, fan practices have often centered around race — and racism in the music industry. In May 2018, BTS fans spread #StreamFakeLoveToEndTrumpsAmerica, referring to a new release by the group at the time, to make BTS chart higher than Post Malone, who simultaneously released new music. Fans cited this as a way to push back against a music industry that elevates mostly white musicians. BTS fans have also long pointed out how BTS does not get airtime on the radio in the U.S., despite the group’s global popularity, because of the industry’s apparent reluctance to have a boy band singing in Korean.

As protests grew in Minneapolis over Floyd’s killing, fans were divided over how much their networks should try to co-opt the online conversation. Some fans thought K-pop artists should speak up in support of Black Lives Matter, citing how much of the fandom consists of BIPOC, and K-pop itself draws much influence from Black music. Others argued that pushing K-pop stars, also referred to as “idols,” to make statements could minimize BLM as a trend, and take attention away from injustices happening in African American communities.

Several K-pop groups — groups that generally avoid making direct political statements — ended up vocalizing support for the movement. Artists like BTS, Tiger JK, Tiffany Young of Girls’ Generation, and several others all made statements in support of Black Lives Matter on their social media accounts. Monsta X was the first group to make a video statement in support.

Daezy Agbakoba was among the first BTS fans to encourage the fandom community match BTS’s donation. “We’re normally very quick to mobilize,” Agbakoba said of BTS fandom online, “because we’re used to being quick when it comes to supporting BTS whenever they drop new releases.”

Fans were then able to take advantage of the networks they were already using to disseminate information about anti-Black racism to their international peers, says Candace Epps-Robertson, an assistant professor of English at UNC-Chapel Hill who researches BTS fandom. Several fan accounts shared videos of police violence against protesters, and spread the word on a #StreamforBLM party to raise bail funds.

“When there was concerted effort being made to help trend #BlackLivesMatter, there was work being done in the fandom to share resources about race in America and educate others about why this issue needs to be recognized globally,” she said. “I saw efforts made by some [Korean fans] who were trying to translate and share these pieces to give their followers more context for what was happening.”

K-pop fandom, especially for black fans, queer fans, and other fans who come from marginalized groups, is a medium through which to celebrate one’s identity. “American media’s surprise comes from their lack of knowledge of who is actually in the fandom,” says Nykeah Parham, a researcher on African Asian history and K-pop fandom.

This past week, #BlackARMYBlockParty and #BlackARMYSlumberParty were trending, with Black BTS fans posting memes and selfies that celebrate Blackness in the fandom community.

But, like many other large groups on social media, some groups of fans have been responsible for online harassment and doxxing. Black fans say they have faced racism and harassment in digital fan spaces, while queer fans have been doxxed.

Miranda Ruth Larsen, a fan studies scholar and Ph.D. candidate at the University of Tokyo, says that toxic “stan” culture, involving fans that reject critical engagement with K-pop, is the cause of bullying, harassment, and dog-piling on Twitter. “The tactics used for mobilization efforts are the same ones used to ‘rally the troops’ on Twitter against an ‘anti’ or anyone deemed a target.” The target, Larsen says, “could be a fan that said something, someone from the industry, or even idols themselves. It’s a skill set, and one that isn’t always used positively.”

In fan spaces generally, “online attacking and smear campaigns against each other’s artists is very common,” said Jeeheng Lee, author of the book “BTS and ARMY Culture” and professor of film studies at Chung-Ang University in Seoul. “So to protect their artists, fandom has developed their tactics” — tactics that include hashtag campaigning, voting culture, streaming encouragement, and thread campaigns.

While there’s no doubt that the flooding of the iWatch Dallas app with fancams prevented the police from using facial recognition technology to arrest protesters, the individual act of posting fancams can be a superficial one. “Much of the involvement is also lip service because the positive media attention is ironically making it harder for BIPOC fans” to continue talking about the challenges they face in fan circles, said Larsen, “as if this short period of engagement has rectified K-pop fandom’s and the K-pop industry’s glaring issues with racism.”

In the aftermath of the Tulsa rally, the Lincoln Project, a chiefly Republican PAC dedicated to preventing Trump’s reelection in 2020, has expressed interest in knowing about K-pop fans, and the Biden War Room, a grassroots organization seeking to get Joe Biden elected for president, has solicited help from fans in “fighting the good fight online.” As a result, some have expressed fears of fandoms being co-opted into certain political interests. Agbakoba says, “At the end of the day, we’re just a bunch of music fans like many other fandoms. I would rather not have outsiders repurpose our role on social media as collective modern day activists.”

If this current moment has shown us anything, K-pop fandom is merely the glue that has brought various people who share a common interest to take action on things that matter to them. It’s an effective glue, but in order to measure how fans might continue to make impact going forward, fans themselves say that there must be a reckoning with racism, harassment, and dog-piling.

In spite of this, fans with strong political convictions and those passionate about social good causes are growing in influence online. After seeing the #MatchAMillion campaign go viral, Agbakoba says, “I’m optimistic about what our fandom can do. … We are far more powerful than we give ourselves credit for.”