It was hard to say what moment was uglier at Donald Trump’s rally in Phoenix: when the president made a racist joke or when his fans urged him to do it. 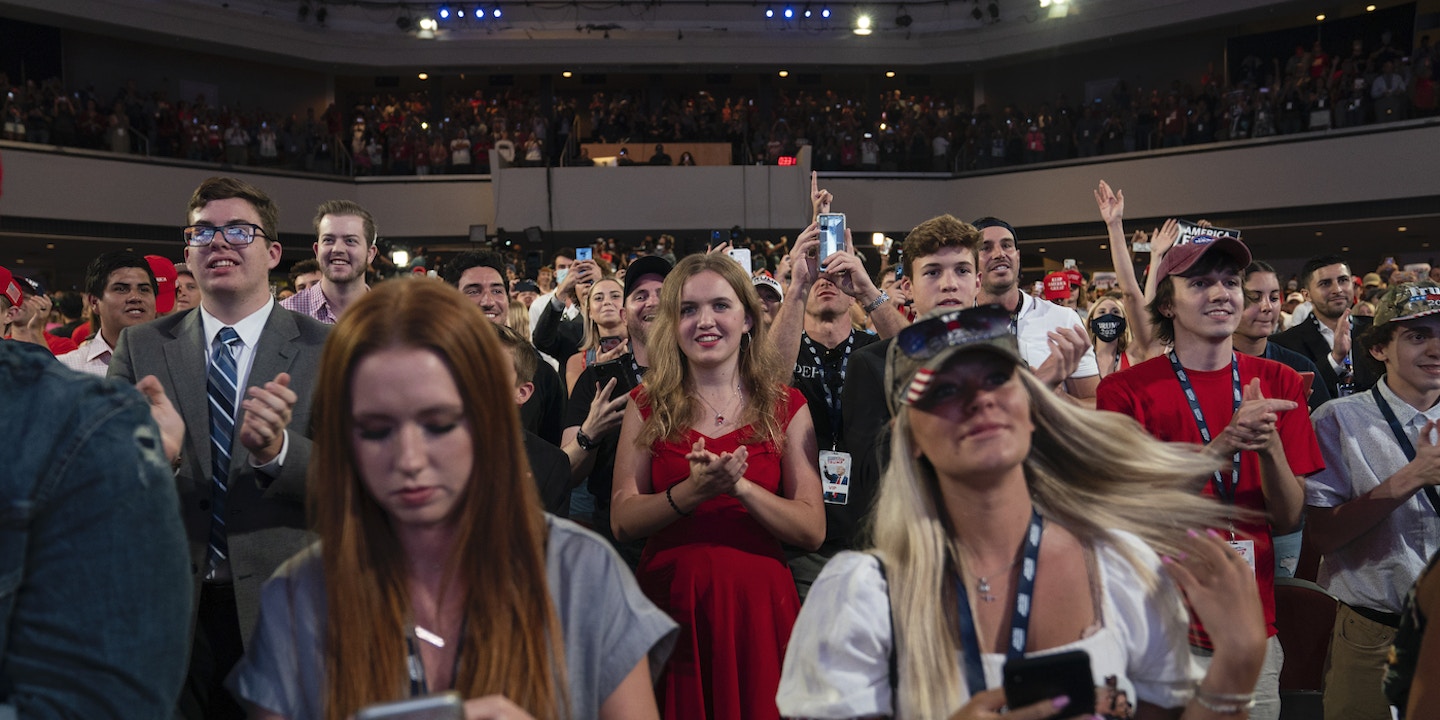 Watching from home, at first it was hard to say which moment in Donald Trump’s rally at a Phoenix megachurch on Tuesday was the ugliest. Was it when the president of the United States repeated the racist joke he told last weekend in Tulsa, calling Covid-19, the viral disease that emerged in China last year, the “Kung Flu;” or was it a split second later, when thousands of his young supporters erupted in cheers?

The president’s attempt to divert attention away from his botched pandemic response, which has cost tens of thousands of Americans their lives, by inciting racist resentment against the nation where the virus jumped from animals to humans, is deeply ugly. As is the fact that thousands of Republican student activists, packed tightly together inside, ignoring social distancing and mask-wearing, responded with thunderous applause.

But there was something even more disturbing about the incident that was not immediately apparent on the live broadcast. Video recorded from inside the packed Dream City Church by the photojournalist Nick Oza revealed that Trump and his fans had shared a moment of call and response hatred in the build up to the joke.

Trump began by observing that the pandemic illness he has spent the past two months downplaying is known by a confusing array of terms. He then paused to ask the assembled student activists if they had seen his speech in Tulsa where he made the same point. When they cheered in response, he started to list some of what he said were the “19 or 20 names” for the disease, most of which referred in some way to its origins in China.

As soon as Trump said, “Wuhan — Wuhan was catching on,” the crowd began to murmur with excitement, clearly anticipating that the president was about to repeat the slur his aides had spent the previous day denying was racist. When Trump drew out the tension by offering “Coronavirus” as the next name in his list, one excited voice after another shouted from the crowd: “Kung Flu!” “Kung Flu!” “Kung Flu!”

The president completed the call-and-response by saying, “Kung Flu, yeah,” and was met with frenzied applause. Oza’s footage shows that several young men leaped to their feet, pumping their fists in the air in exultation, apparently thrilled to see their hero transgress all bounds of common decency right in front of them.

Weijia Jiang, a White House correspondent for CBS News, who reported in March that a White House staffer had made the same racist joke about the disease to her face, noted on Twitter that “Trump relished the feedback” from the crowd in Phoenix. “He often tests out material at rallies like a stand up comedian, and it appears this is going to be part of his act,” she added.

After a bizarre aside, in which the president seemed to suggest he was unsure what the 19 in Covid-19 stands for — “I say, ‘What’s the 19?’ Covid-19. Some people can’t explain what the 19…” — (it refers to 2019, the year the new coronavirus disease emerged), Trump returned to his list of alternate names. “Some people call it the Chinese Flu, the China Flu, right? They call it, the China,” Trump said, making it clear that his intention is to blame China for not containing the virus his own government has all but given up on suppressing.

As if the spectacle of the president actively inciting a racist backlash against Chinese-Americans wasn’t appalling enough, the alternate names for the disease he proposed were also a slap in the face of public health experts, who have spent the past five months trying to make it clear to Americans that this deadly new illness, which could have longterm health effects for even those who survive it, is not, as Trump repeatedly insisted at the start of the outbreak, merely a form of influenza.

The president’s effort to pretend that the viral outbreak has been contained, which no doubt encouraged almost all of the young activists in the hall to crowd together without masks, even extended to telling them at one point that the United States, in the past two months, has lived through, “hopefully, the end of the pandemic.”

Trump also repeated his false claim that the spike in new cases in states that have pressed ahead with reopening businesses without meeting the benchmarks for containment released by his own coronavirus task force was merely a statistical blip caused by more widespread testing. As he did, someone in the audience reportedly shouted out, “Stop the testing!”

What made that exchange accidentally revealing is that the audience member, a supporter of the president, was at that moment risking infection by being in a tightly packed auditorium in which almost no one was wearing a mask, while Trump himself, who is protected from the virus by having everyone he interacts with tested daily, was standing at a safe distance from the crowd, alone on stage, and more than 10 feet from a separate podium set up for other speakers to use.

If Trump wants to demonstrate that testing really is, as he has said, “overrated,” and there is no need for Americans to fear infection, he could start by no longer requiring anyone who gets close to him to be tested first, and get back to shaking some hands at his next rally.

Update: Sunday, June 28, 4:12 p.m. PDT
The New York Times reported on Sunday that former President Barack Obama was among those appalled by Trump’s racist joke. Two days after the Phoenix rally, Obama told participants in a private fundraiser for Trump’s opponent, Joe Biden, conducted via Zoom: “I don’t want a country in which the president of the United States is actively trying to promote anti-Asian sentiment and thinks it’s funny. I don’t want that. That still shocks and pisses me off.”