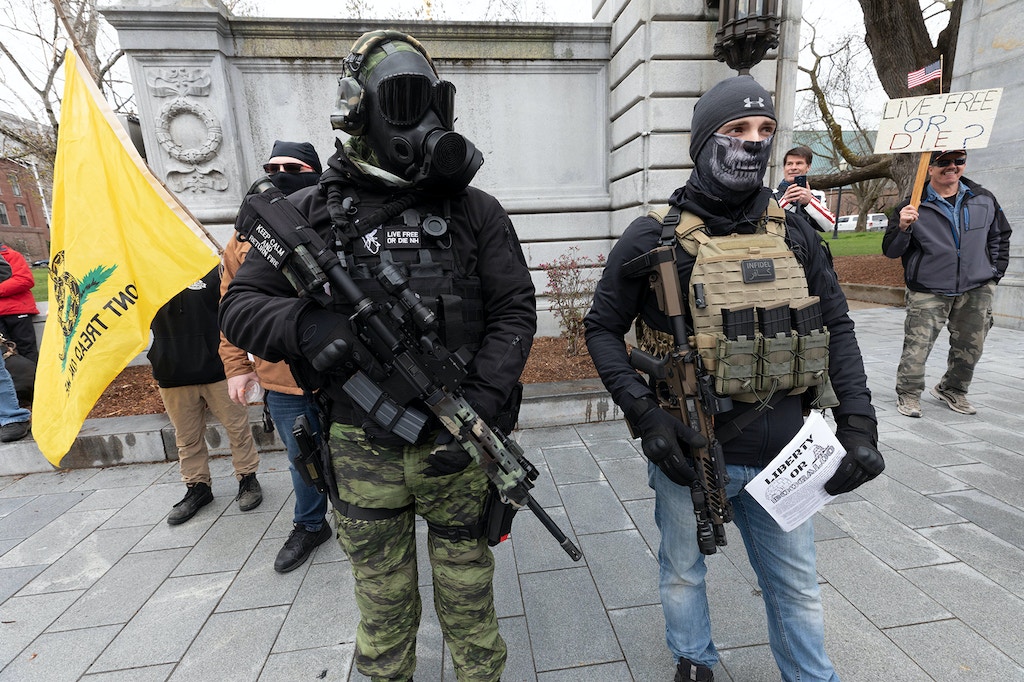 Members of the so-called Boogaloo movement, attend a demonstration against the lockdown over concerns about Covid-19 on April 18, 2020 at the State House in Concord, N.H.

At this point, it’s become a staple of dark humor to observe that 2020 has been the year in which the Four Horsemen of the Apocalypse seemingly decided to descend on the United States. Yet even before our fears of war, pestilence, and economic collapse began taking physical form, one could already observe morbid symptoms spreading within the extremities of our body politic. The strongest sign of a looming social illness has been the rebirth and spread of extremist ideologies — beliefs not long ago dismissed by liberal triumphalists as relics of historical memory.

Mutated through new information technologies and drawing strength from feelings of economic and demographic dislocation, fascist and sectarian ideologies have found a home in the hearts of members of a new generation of Americans.

Whether most people have connected the dots or not, a violent struggle is already playing out. Over the past few years, a steady drumbeat of massacres have been carried out by extremists associated with the new far-right. These attacks have targeted synagogues, mosques, and communities where immigrants are concentrated. In their wake, the shooters left behind manifestos damning a world that they claimed was shrinking in space for people like them.

What these ideologues drifting within the currents of this movement have really been waiting for, however, is a real crisis, one that would give them an opportunity to put their ideas of racial warfare and ethnic purification into full effect. That crisis is here.

The combination of the coronavirus and the sudden collapse of the American economy has given society an exogenous shock unseen in generations. The pandemic and the social tensions it has unleashed are likely to supercharge the forces that gave rise to the new far-right extremism, even as they produce countervailing energies that could revive the best promises of liberalism.

Engaging in political predictions is a foolish, high-risk, low-reward activity. But having followed the iterations of this new extremist ideology at home and abroad — and grappled with the fact that there is a pool of young men who have proven themselves willing to die for it — it strikes me as irresponsible to not advise people to brace for what is on the horizon.

Although some have yet to accept it, the U.S. is in the midst of an unstoppable cultural and demographic transition into multiculturalism. The natural challenges entailed in such a shift should not be ignored. It is incumbent upon everyone to do their part to make it a success, while ensuring that everyone feels they have a place in this country.

This demographic shift, though, has also given rise to serious anxieties among some within the majority community — anxieties that helped enable the rise of a white nationalist named Donald Trump to the presidency. These majoritarian sentiments are likely to escalate as minority groups grow to embrace their own forms of racial consciousness, often based on redressing past injustices suffered at the hands of the majority.

The current wave of national protests was triggered by a killing with strong sectarian overtones — another Black man killed by a white police officer. From a historical perspective, countries that have experienced wholesale economic collapse at the same time as exploding ethnic tensions have often had a difficult time dealing with that, to put it mildly. The United States still has a lot of resources at its disposal to handle these challenges, but the gravity of the present situation should not be understated.

Americans are experiencing levels of unemployment unprecedented in their modern history. According to some estimates, nearly half of these jobs may never return. At the same time, stunning acts of symbolic cultural transformation are playing out in real time. As statues of polarizing figures tied to America’s European founding come crashing down one after another, often with the support of liberal white Americans, the political project of those on the extremes — particularly white nationalists — is simultaneously jeopardized and emboldened.

On the surface, it seems that events are driving the U.S. in the opposite direction of white nationalist goals and that they will likely taste defeat. But, on the other hand, a structural collapse of American society that fractures it along ethnic lines is the prerequisite for their own dark vision of a society purified by the fires of racial violence.

“For white nationalists, this is a crisis as well as an opportunity.”

“One of the things that white nationalists have always been interested in is imposing their own understanding of time: a narrative of what the past looked like and what the future should look like,” said Alexandra Minna Stern, the author of “Proud Boys and the White Ethnostate: How the Alt-Right is Warping the American Imagination.” “In that sense, the coronavirus and the protests have destabilized time. History is being rewritten and the marginalized are being recognized.”

“For white nationalists, this is a crisis as well as an opportunity,” Stern said. “In their opinion, movements like Black Lives Matter are a form of identity politics par excellence. If it is succeeding and gaining currency, then in their view white racial consciousness might rise as well.”

This is not to equate the Black Lives Matter movement with white nationalists of course. But amid the roiling social changes we are now witnessing, many of them progressive, far-right identitarians also see an opportunity at hand.

It should go without saying that it is a choice to view things from an ethno-nationalist perspective. In the U.S., that choice is today not an obviously popular one. A large proportion — perhaps even the majority of the tens of millions who came out into the streets in the unprecedented protest movement triggered by the killing of George Floyd — were white Americans. It remains to be seen how long this support will last, but the spontaneous outrage over the murder of an unarmed Black man by a white police officer is noble and encouraging.

However, those white people who are ethno-nationalists — and there are many of them — will likely view these developments much more darkly: as a sign that they are on the verge of being displaced from their privileged historical role in American society, or, even worse, reduced to a marginalized minority. In a country with loose social bonds and easy access to weaponry, it doesn’t take many people thinking that way to do serious harm.

If you peer into the shadows, you can already see the contours of a threat that will be with us for years to come. In early May, a group of men, described by prosecutors as having “U.S. military experience,” were arrested and charged with trying to spark violence as part of a broader plot to cause the collapse of the federal government and trigger a civil war. A number of shootings and car-ramming attacks carried out during the recent protests should signal that there are people ready for their most extreme beliefs to reach praxis.

Even more ominously, for a state hollowed out by years of elite corruption, there are signs that law enforcement agencies and the U.S. military have been infiltrated by individuals adhering to far-right ideologies. If a serious crisis comes, history suggests that it will be people like this — with access to training and guns — whose defection to the side of the extremists would have the most dire implications.

At the same time, just as it is wrong — dangerous even — to promote essentialized racial categories that lump together huge numbers of diverse people, it would be a mistake to impute onto the far-right movement a unity that it does not possess. Not all of the various subgroups are willing to engage in violence nor do they all hold the same views on every issue. To the extent that the far right can be described as having a unified perspective, it is on the issues of race and immigration. On this count, the spread of the coronavirus and the minority-led protest movement in the U.S. are two sides of the same coin: both products of globalization, which is the one force that they are united in their desire to destroy.

We should expect the far right to continue waging this battle to undo globalization with whatever tools are at its disposal, legal and illegal, violent and nonviolent. Those of us who have to live with the reality of a complex, cosmopolitan world — including the tens of millions of Americans and Europeans of minority backgrounds whose very existence and identity is a product of that reality — must negotiate an appropriate response. The one thing we can’t do is fall into a trap of believing that this conflict doesn’t exist, or that it can be ignored.

“For those whose ultimate goal is a multipolar world where everyone is siloed and in their own place, recent events are seen as a rebuke against globalization,” said Benjamin Teitelbaum, an expert on the far right at the University of Colorado, Boulder and the author of a new book about former Trump guru Steve Bannon called “War for Eternity: Inside Bannon’s Far-Right Circle of Global Power Brokers.”

“If one takes the view that the primary expression of decadence in our age is cosmopolitanism,” said Teitelbaum, “the only way to survive that age is through a militant anti-cosmopolitanism.”