Robbie Goldstein is challenging incumbent Rep. Stephen Lynch, the most conservative member of the Massachusetts delegation. 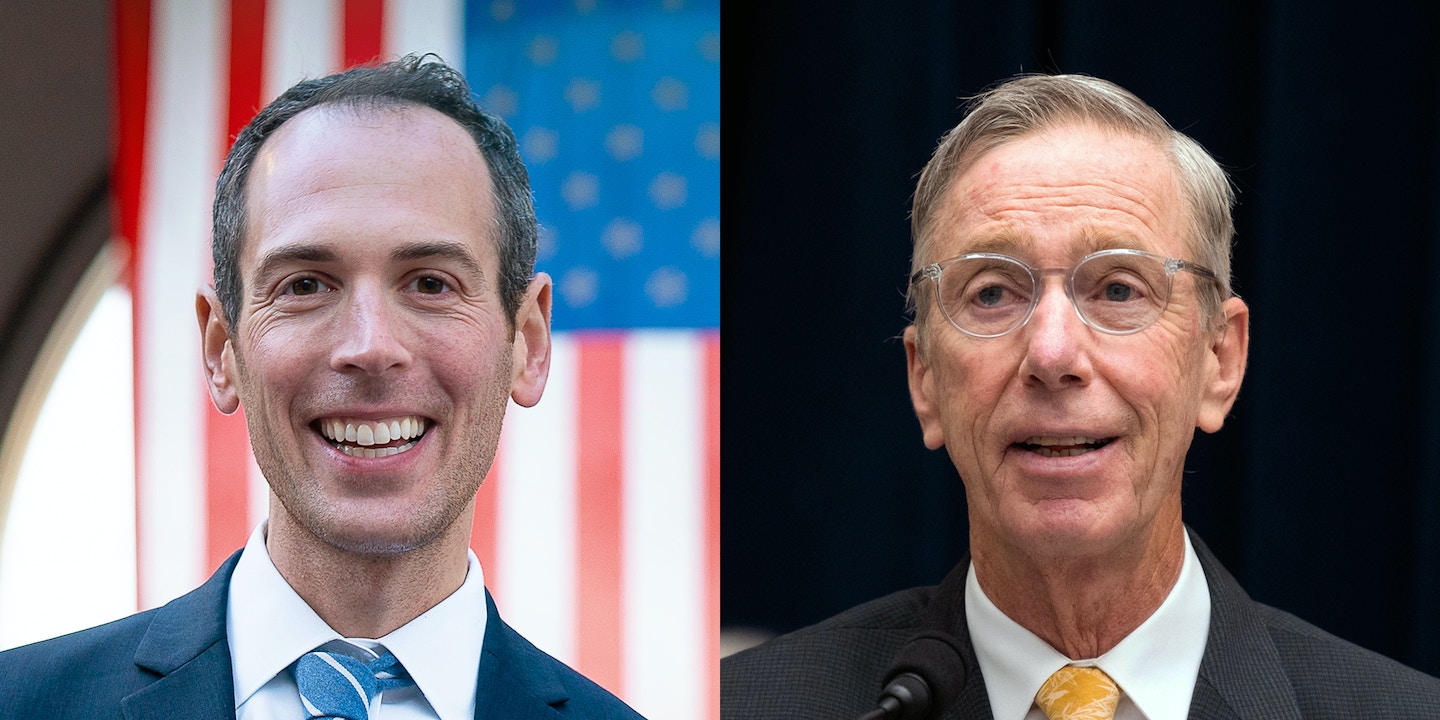 With just over two weeks left until the Massachusetts Democratic primary, progressives across the country are focused on the high-profile primaries of Sen. Ed Markey, who is fending off a challenge from Rep. Joe Kennedy, and Holyoke Mayor Alex Morse, who is running against House Ways and Means Chair Richard Neal.

Elsewhere in the state, other progressive challengers are struggling to attract similar attention. In the crowded House race to replace Kennedy, two progressives appear tied for third behind two more conservative Democrats. And in the Boston-area 8th Congressional District, Robbie Goldstein, a 36-year-old primary care physician, is scrambling to get his name out and convince voters he’s not running a long-shot bid.

On Wednesday, Goldstein’s campaign released a poll claiming he trailed just 7 percentage points behind nine-term moderate incumbent Rep. Stephen Lynch. Conducted last weekend by Lincoln Park Strategies, the poll found that 29 percent of likely voters remain undecided. However, Lynch held a clear advantage when it came to name recognition, with roughly 70 percent of voters knowing who he was, compared to 40 percent recognizing Goldstein. Still, the pollsters concluded Goldstein “has a real chance to win” because among undecideds, 42 percent said they’d prefer to vote for a more progressive candidate, 71 percent said they’d prefer a pro-choice candidate, and 73 percent said they’d prefer a candidate who backs Medicare for All.

Goldstein’s case against Lynch rests on substantive policy differences, including Medicare for All and reproductive rights. The incumbent opposes single-payer health care, and while Lynch has criticized federal efforts to defund Planned Parenthood and “draconian” state-level abortion restrictions, he himself identifies as pro-life and believes ending pregnancies should be “legal and rare.”

Goldstein’s campaign argues that this race presents a viable opportunity to bring another progressive to Congress, even if Lynch is not as influential as other incumbents who’ve been toppled, like Reps. Joe Crowley and Eliot Engel. “I am constantly confounded by progressives’ infatuation with claiming these big headline victories instead of just winning and building power,” said Karen Clawson Cosmas, Goldstein’s campaign manager. “We can replace a do-nothing moderate Democrat with someone who is actually a champion of the issues of the progressive wing of the party.”

Goldstein is hoping for a surge in the final weeks — similar to what Cori Bush saw recently in St. Louis, and Jamaal Bowman in New York — though Goldstein trails them both in fundraising and major endorsements, and he has far less name recognition than Bush, a Ferguson activist who ran for Congress in 2018 and was featured in a documentary alongside Alexandria Ocasio-Cortez. By the end of June, Goldstein had raised just $292,000, next to Lynch’s $660,000, though Goldstein did raise more in June than in the previous five months combined.

To some extent Goldstein is banking on complacency from his opponent. In the last quarter Lynch raised just $45,000, and has spent no money to date on TV or Facebook ads. Also, unlike some of his Massachusetts colleagues running for reelection, Lynch has had no members of Congress campaigning on his behalf. Goldstein says this is a reflection of his opponent “not having any friends left in Washington.”

Goldstein, meanwhile, is backed by left-wing groups like Indivisible, Our Revolution, Progressive Massachusetts, and even the Boston Teachers Union. Justice Democrats, which endorsed Morse, has stayed out of this primary, after having considered backing another progressive physician, Mohammad Dar, who entered the race almost a year before Goldstein did, but dropped out early due to personal reasons.

Lynch’s campaign spokesperson, Scott Ferson, said they are confident about the representative’s standing in the district and resources available left to campaign. “We have a voter engagement plan in place, and he’s not fundraising just to stockpile money,” Ferson said. “He’s doing things in a way that fits this race.”

Lynch, who grew up poor in South Boston public housing and spent two decades as an ironworker, was first elected to Congress in 2001. He represents a district that over the last two decades has grown both more diverse and more gentrified. Following the 2010 Census, Lynch’s district boundaries were redrawn, and while Joe Biden won every city and town in the 8th Congressional District on Super Tuesday, Goldstein says there’s a real path to victory, since Warren and Bernie Sanders racked up more votes in the district overall than Biden.

An Irish Catholic proud of his ties to blue-collar workers, Lynch has voiced concerns about the party drifting too far left and is critical of the term “socialism,” which he warns could scare off older voters. Ferson argues that Lynch remains “well-in-tune” with his district and has handily defeated candidates who have run to his left in the past. In 2018, Lynch was challenged by Brianna Wu, a software engineer who ran on Medicare for All and tackling income inequality, and beat her with 71 percent of the vote.

The sharpest contrast between the two candidates revolves around health care. Ironically one of Lynch’s biggest vulnerabilities is that he was just one of 45 House Democrats to vote against the Affordable Care Act in 2010, and of those Democrats, only three remain in Congress. Rep. Dan Lipinski, one of the three, lost his primary in March to progressive challenger Marie Newman.

At the time, Lynch explained he voted no because he felt the final version gave too much power to the insurance industry and would lead to spiking prices, and he opposed how the bill taxed union health care plans and eliminated opportunities for state public options.

“I don’t think [Lynch] is as conservative as Lipinski, but I do think the thing that sticks with people here is him having voted against the Affordable Care Act, given how much activism there was around that,” said Jonathan Cohn, a leader with Progressive Massachusetts, a statewide advocacy group. “People remember that.”

Lynch, for his part, has criticized Goldstein for trying to “rip out the ACA root and branch” and says he’s proud of the work done to repeal the tax on union health care plans. Goldstein “wants to dismantle the ACA and get rid of it, so if you ask me who really supports the ACA, that’s Stephen,” said Ferson, Lynch’s spokesperson.

Lynch, who has long self-described as an anti-abortion Democrat, notably began moving left in 2013, when he ran against Ed Markey for the Senate seat left open when John Kerry became secretary of state. As a state legislator in Massachusetts, Lynch tried to ban abortions after 24 weeks, and in Congress he voted to support the “partial-birth abortion” ban. But in 2013, Lynch made clear that while he was pro-life and wanted abortions to remain “rare,” he would seek to protect Roe v. Wade and vote against any Supreme Court nominee who wanted to overturn the decision.

He’s moved even further left in recent years. In 2019, he wrote a Boston Globe op-ed condemning states for their new abortion restrictions and Congress for trying to defund Planned Parenthood. “If these recent developments define the ‘pro-life’ movement, you can count me out,” he wrote. Lynch received 100 percent ratings from NARAL Pro-Choice America for the last five years, but neither NARAL nor Planned Parenthood is endorsing in the primary.

Goldstein, who has also been endorsed by local chapters of the Sunrise Movement, is campaigning on being more aggressive on climate change than the incumbent. Lynch was an original co-sponsor of the Green New Deal, though has said the 10-year timetable outlined in the resolution to transition completely off fossil fuels is “unrealistic.” Lynch originally was a strong supporter of the Keystone Pipeline, but reversed his position on that in 2013. In a recent primary debate, Lynch urged viewers to look at his ratings from the League of Conservation Voters, where he has a “lifetime score” of 95 percent.

Goldstein has repeatedly blasted Lynch for once calling climate change an “elitist” issue, a charge based on a 2017 CommonWealth magazine article, though the full quote and context is not included in the piece. Lynch has denied using that descriptor.

While Lynch’s campaign disputes that he used that exact word, Ferson, his spokesperson, linked the sentiment to Lynch’s background as an ironworker and the congressman’s belief that lawmakers shouldn’t be “cavalier” when discussing job loss associated with transitioning off fossil fuels. “I think it’s in the context of who do we need to include when we’re having those discussions,” said Ferson. “And he supports the Green New Deal in part because it’s so focused on creating new jobs.”

Shawn Zeller, the author of the CommonWealth article who now works as an editor at CQ Roll Call, told The Intercept that Lynch had made the reference in the context of his support for Tim Ryan for House speaker. “Trump had just won the presidency and Lynch was among those who felt Pelosi was leading the party too far left,” Zeller wrote in an email. “In an interview with me, he mentioned climate change as an example and said he preferred Democrats focus on lunch bucket issues to help the working class.”

On issues of immigration, there are differences between the candidates too. Over the objections of President Barack Obama in 2015, Lynch voted to tighten vetting standards for refugees from Iraq and Syria, and in 2018 he voted in favor of a resolution lauding Immigration and Customs Enforcement, even when 133 House Democrats just voted “present.” While Lynch has condemned President Donald Trump’s child separation policy and backed a 2019 resolution to establish standards of care at border facilities, some of his constituents say he’s moved too slowly, and been too quiet overall.

“He’s just not interested in engaging with constituents who are looking for someone with a sense of urgency,” said Tonya Tedesco, a Boston activist who organized trips to Lynch’s district offices last summer to press him on immigration. “We are in crisis mode and I do not know that he recognizes that.”