When Taylor Passow first met Aaron Coleman last November, she was impressed by his drive and his passion for a better world. “I had never been with somebody who seemed so focused on a career, and how he wanted to change the country. He seemed so much more mature than anybody I’d ever been with,” Passow, who is 21 years old, told The Intercept.

Early in their relationship, he told her about his troubled childhood, confessing to her that he had blackmailed a girl in middle school over nude photos. Passow, a host at a restaurant in Topeka, Kansas, said she believed that he had grown and changed, that the behavior was behind him — that he deserved a second chance.

Coleman’s story touched off a national debate after his recent upset victory in a Democratic primary in a Kansas state House district and a story by the New York Times, which reported that the 19-year-old winner, when he was 12, had blackmailed a classmate. After obtaining a nude photo of her, he demanded more and said that he would widely share the one he had if she didn’t comply with his demand. She refused, and he circulated the photo. Coleman admitted to the offense, adding that he had been cruel to other girls over the next two years. He told The Intercept’s Glenn Greenwald that he hoped by acknowledging what he had done, and condemning it, he might be able to positively influence other angry boys. The girls that he had hurt, he said, would have to live with that the rest of their lives, and he’d have to live with the knowledge of what he’d done.

Passow’s relationship with Coleman ran into trouble quickly, even as she remained impressed by the drive of the young political candidate, and the two spoke of starting a life together. According to Passow, one particular incident irreparably broke their relationship. In a hot tub at an Airbnb in Kansas City, she said, the two were discussing Coleman’s interest in a threesome on December 27, 2019. Passow said it wasn’t her thing, but maybe as a birthday present she’d break up with him for just one day and he could have one. Coleman didn’t like the joke, she recalled. “He sat there for a few seconds, then he jumped on top of me, put his hands around my throat and started squeezing, and slapped me three times, and said, ‘I don’t know where the fuck you think you’re going,’” Passow recalled and said she pushed him off her.

Next, Passow said, Coleman demanded that she apologize for threatening to break up with him, stormed out of the hot tub, and went to the car. She didn’t want to lose him, she said, and texted him an apology. He said he was only warming up the car. “I’m sorry baby I failed your shit test,” he texted back. The texts, reviewed by The Intercept, were sent to a number associated with Coleman’s campaign finance registration. 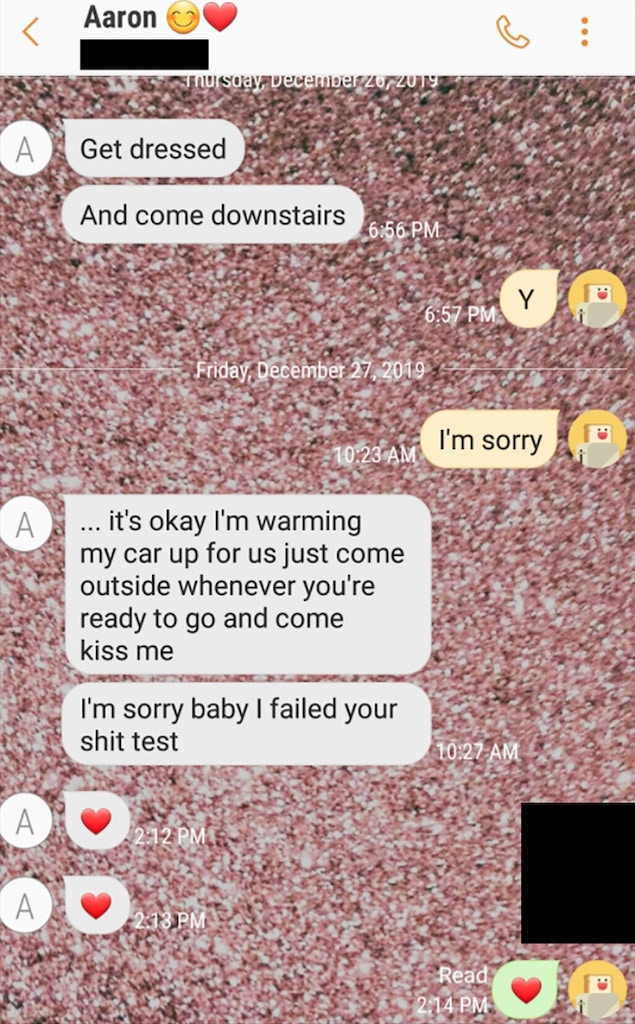 Four days later, in text messages with Passow, Coleman disputed her recollection. “You have a funny memory,” he said. “You dumped me and I smacked you and you smacked me and I immediately got up and stormed out of the hot tub.” Passow said she told her childhood friend about the incident a few days later. The friend agreed to speak as long as she could remain anonymous and relayed many of the same stories to The Intercept without being prompted, including that Passow told her on New Year’s Eve about being slapped and choked by Coleman in Kansas City.

That night, the two were fighting again, and Coleman told Passow over text that she should kill herself. “Air out the clip into your head,” he told her on December 31. “Mag dump yourself. Do that midnight tonight. If I never hear from you again then I’ll know what happened.” In January, Passow told The Intercept, she sent Coleman a long letter breaking up with him, unable to move past the assault. “I just didn’t feel the same about him anymore,” she said.

Multiple attempts to reach Coleman through a variety of channels were unsuccessful. After initially announcing that he was withdrawing from the race, Coleman on Tuesday morning reversed course, saying that he would remain on the ballot for the general election, campaign door to door, and leave the question to voters. In a statement on Twitter posted after publication, Coleman admitted being “abusive” to his ex-girlfriend but denied choking her. “I know large quantities of alcohol could be affecting both our memories,” he wrote.

When the New York Times story ran last week, some believed that if Coleman had changed and grown, he deserved his equal place in society. Others argued that his crime, regardless of his age, was so heinous that he ought to be barred from public life, at least until he made meaningful amends. Still others argued that what he did in middle school should be factored in to an understanding of who he is today given his relative youth — still just 19 years old — but that what mattered was how he has comported himself as an adult. Ultimately, a strong contingent of progressive commentators determined that anything less than a swift condemnation of Coleman was rooted in misogyny.

Passow said that on Sunday night, Coleman had called her to say he was staying in the race, asking what he could do to make amends. She refused to engage, telling him she would speak publicly, and he followed up by text. “I deeply apologize for any mistakes I might have made. I know I wasn’t a perfect boyfriend,” he wrote. “But I’m not dropping out of the race. I’ve been honest with the public about everything that I’ve done, if you want to accuse me of something, you’re welcome to do that, and I’ll be honest then as well. No one is perfect. I’m not gonna try to stop you if you want to tell your story to the papers or whoever, but I’m gonna make sure that story is told truthfully.”

When Coleman had first told her about his troubled and impoverished childhood and the harm he’d caused, Passow hoped it was behind him. “At the time, I did think he wasn’t that person anymore,” she said. “He’s not changed; this isn’t in his past. I just want people to know he’s not the person he says he is, and if you still want to vote for somebody who’s like that, I guess that’s your prerogative.”

Update: September 8, 2020
The article has been updated to include a statement by Coleman posted on Twitter on September 6.