“The reasons have been ridiculous,” said a Michigan teacher who will have to go to her school building to offer remote classes. 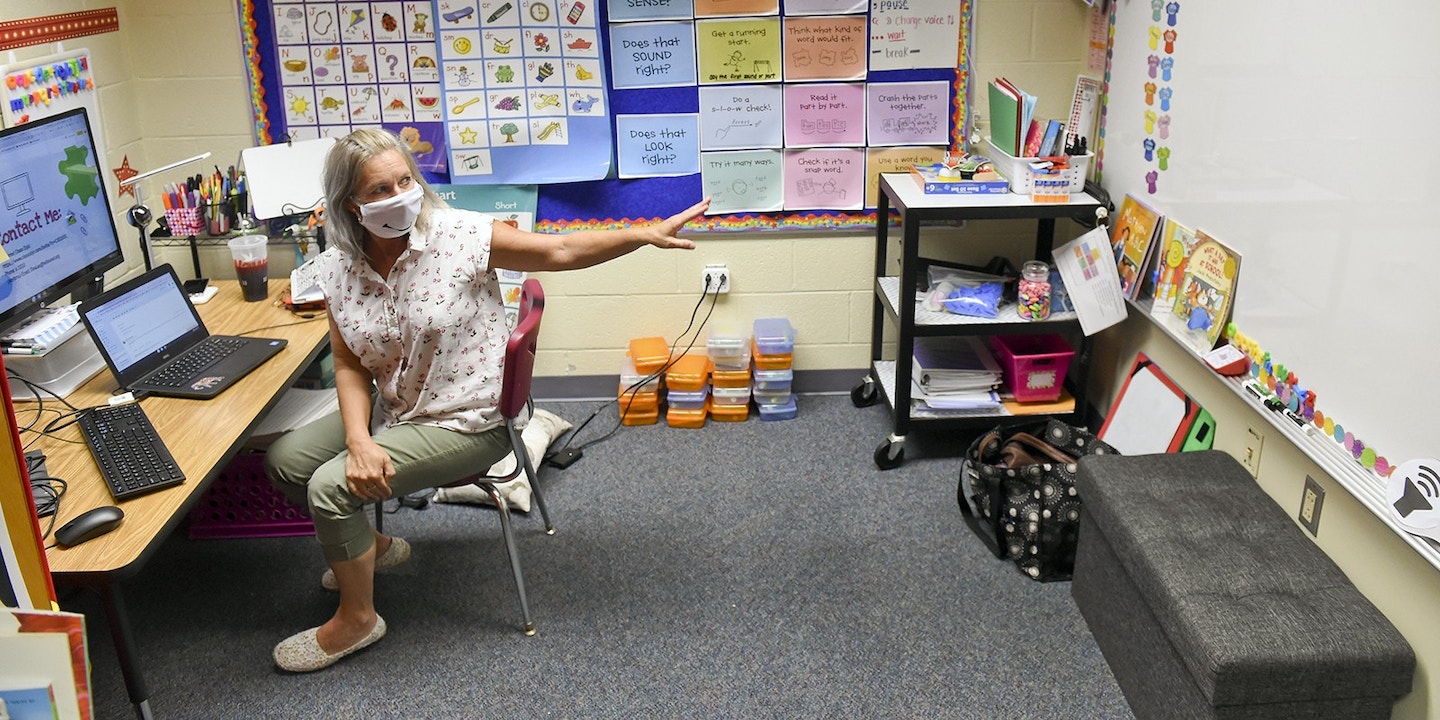 Kathy Rokakis, a 62-year-old high school French teacher in Michigan, is dreading her return to school next week.

Students in her Wayne County school district — Plymouth-Canton Community Schools — were originally going to be given the option to return to in-person classes or do remote learning, but earlier this month her school board voted to start the school year 100 percent virtual. “A lot of teachers were really relieved for so many reasons,” said Rokakis.

But two days after the school board decided the district would go fully remote, Superintendent Monica Merritt announced that teachers would still be coming into school to teach children virtually. “There wasn’t anything that had been discussed, we were just told that’s how it would happen,” recalled Rokakis. “We were basically blindsided.”

In a letter sent last Friday to educators, Merritt defended her decision by saying, “We anticipate how hard it will be for many students to continue learning in a remote space when they miss their school community so much. It is with this lens, focused on what is best for our students, that has resulted in our expectation that our staff will teach remotely from their classrooms.” Merritt did not return requests for comment.

Teachers have continued to press administration for reasons the benefits of this arrangement outweigh the public health risks of coming into school during the coronavirus pandemic.

“The reasons have been ridiculous. One is so that students will be able to see their classrooms, so that when they come back face-to-face they’ll feel more comfortable,” said Rokakis. “Another is they say so we’ll have anything that we need accessible to us, and they keep using the scenario of if we have to do a science experiment. But I don’t teach science, and the things I need are very accessible to me here at home. And now I’m expected to teach French in a mask?”

In light of all this, some teachers in Plymouth-Canton have applied for family and medical leave to avoid going back, and others are retiring early, according to Rokakis. “If I could, I would, but I can’t because I carry the health insurance for my family,” she said. “I’m feeling very uncomfortable. To me, there needs to be more grace. This is not a normal time and people are trying their hardest.”

Across the country, as schools in some states have already reopened and others are planning to do so in the coming weeks, school districts and board members are grappling with and continually revising their back-to-school procedures. While many schools have opted to begin the year fully virtual given the risks presented by Covid-19, educators in some of those districts are still being required to teach from their classrooms. Even with requirements to wear masks, many teachers feel coming into school buildings is an unnecessary risk during the pandemic, for reasons including poor ventilation, slow coronavirus testing, and unreliable levels of personal protective equipment.

Late last week, Jeffrey Riley, the Massachusetts Commissioner of Elementary and Secondary Education, released guidance saying it’s the state’s “expectation” that all teachers and critical support staff will report to schools to teach each day if their district is doing remote learning. Reasons Riley listed included “provid[ing] more consistency” for students, more reliable internet access and faster IT support, making it easier to collaborate with colleagues, and making it easier for administrators “to monitor the level and amount of instruction students receive.”

The president of the Massachusetts Teachers Association, Merrie Najimy, released a blistering statement in response to the state’s recommendation, accusing Riley of having a “fundamental lack of trust” in teachers to do their jobs without being supervised.

“It is paternalistic and punitive and has no bearing on the quality of education that the real experts — the educators — provide so masterfully,” Najimy wrote, urging for districts to reject the state’s guidance. “Educators across the Commonwealth are focused on fully redesigning remote instruction to make it more effective, while pushing school districts and the state to make the changes needed to gradually return to in-person instruction. Commissioner Riley should be advocating for the resources that educators and districts need to achieve these goals rather than putting the thumbscrews to teachers to get them to return to school buildings before it is safe to do so.”

Scott McLennan, a spokesperson for the union, told The Intercept that districts and unions are still negotiating reopening plans, so they’re still “waiting to see how it plays out.” At least a few large school districts in the state, like Springfield and Worcester, have said they will not require teachers to come to school for remote instruction.

Joanna Plotz, an elementary ESL teacher in Chelsea, a city with among the highest rates of Covid-19 infections in the state, is hoping her union succeeds in blocking the recommendation. “In an ideal world I’d obviously love to be in a classroom, but it just doesn’t feel worth it,” said Plotz.

If teachers at Plotz’s school are required to return to school, Plotz would be sharing a classroom with another educator, who has a 3-year-old daughter. Many teachers would like the option to go in. “I might want to go in sometimes. I live in a 500-square-foot-apartment, and Sundays it might be good to go in and prepare things, but I’d only want to do it if the other teacher and her daughter wouldn’t be there,” said Plotz. “And I do have some coworkers who are going crazy at home. But the way [the state] is doing it just says, ‘We don’t trust teachers.’”

Reached for comment, Colleen Quinn, a spokesperson for Commissioner Riley, defended the guidance. “In remote scenarios, instruction from the classroom is the most effective educational environment,” she said.

In other parts of the country, some teachers are already back at school providing remote instruction to students at home.

Erin Taylor, a middle school teacher in Colorado Springs, Colorado, said she still has not received a real explanation from her district as to why educators have to be teaching remotely from their school buildings.

“As teachers we always have to have an answer when our students ask us, ‘Why do we have to learn this?’ and I have not heard any answer from the district,” said Taylor. “It feels like a lack of trust, a surveillance thing, and I would totally be open and love to hear how they arrived at this decision, even if I disagreed with it. But we haven’t even gotten that.”

Devra Ashby, a spokesperson for the school district told The Intercept that it is their goal “to provide a standard professional instructional delivery setting and enhanced teacher classroom performance” and that teachers “have the most resources at their fingertips when they are in their classrooms.” Ashby added that one-third of their students will be coming into the building for hybrid learning and that their standards for education have not changed. “We must deliver industry-standard instructions in a professional academic setting, which promotes student academic potential and achievement,” she said.

Taylor said there has been mixed messaging around masks. Colorado has a statewide mandate that says individuals must wear masks when inside public places, and she says her school district has also advised educators to wear masks at all times, but that policy is not being enforced at every school.

“I’ve been back at school for over two weeks now and I just see a lot of people not wearing masks even though that’s supposed to be the official policy,” she said. “I’ve walked past people where there are meetings going on and a bunch of people sitting around the table not wearing masks.”

Taylor, who spoke to The Intercept on the second day of the school year, said she’s trying to be empathetic but is worried about how unsafe she already feels.

“We always talk as teachers about how the beginning of the year is the time to reinforce routine and rules and make sure you’re being clear, because with kids, if you don’t enforce a rule at the beginning, it becomes really hard to get that [compliance] later on,” she said. “It just feels like, well, if we’re not all wearing masks on Day 2, then I don’t have much hope for the year.”

Shawntel Shirkey, a paraeducator in Wichita, Kansas, also has to come into her high school for remote instruction. Earlier this month, the Wichita school board approved in-person learning for elementary schools and remote learning for middle and high school students.

Shirkey thinks given the conservative political climate in Kansas, her school board “made the best decision I could hope for.” At least one teacher at her school has tested positive for Covid-19 so far, but she praised her school for at least giving all staff members cloth masks, ample amounts of sanitizer and disinfectant, and the option to get face shields. “The district itself is not being very forthcoming but I’m lucky that my principal is being transparent about if someone has tested positive,” Shirkey said. Like in Taylor’s school, masks mandates don’t always mean staff actually wears them.

Shirkey thinks it’s been “pretty split” among teachers about who wants to be providing remote instruction from school. “Some educators definitely see the irony of requiring teachers to come into buildings that the district has deemed unsafe for students,” she said. “But others just think the pandemic is ridiculous and as soon as the election is over, coronavirus is going to go away.”