Amid Coronavirus, Trump Moved to Expel Immigrants — But Border Patrol Didn’t Test Any of Them 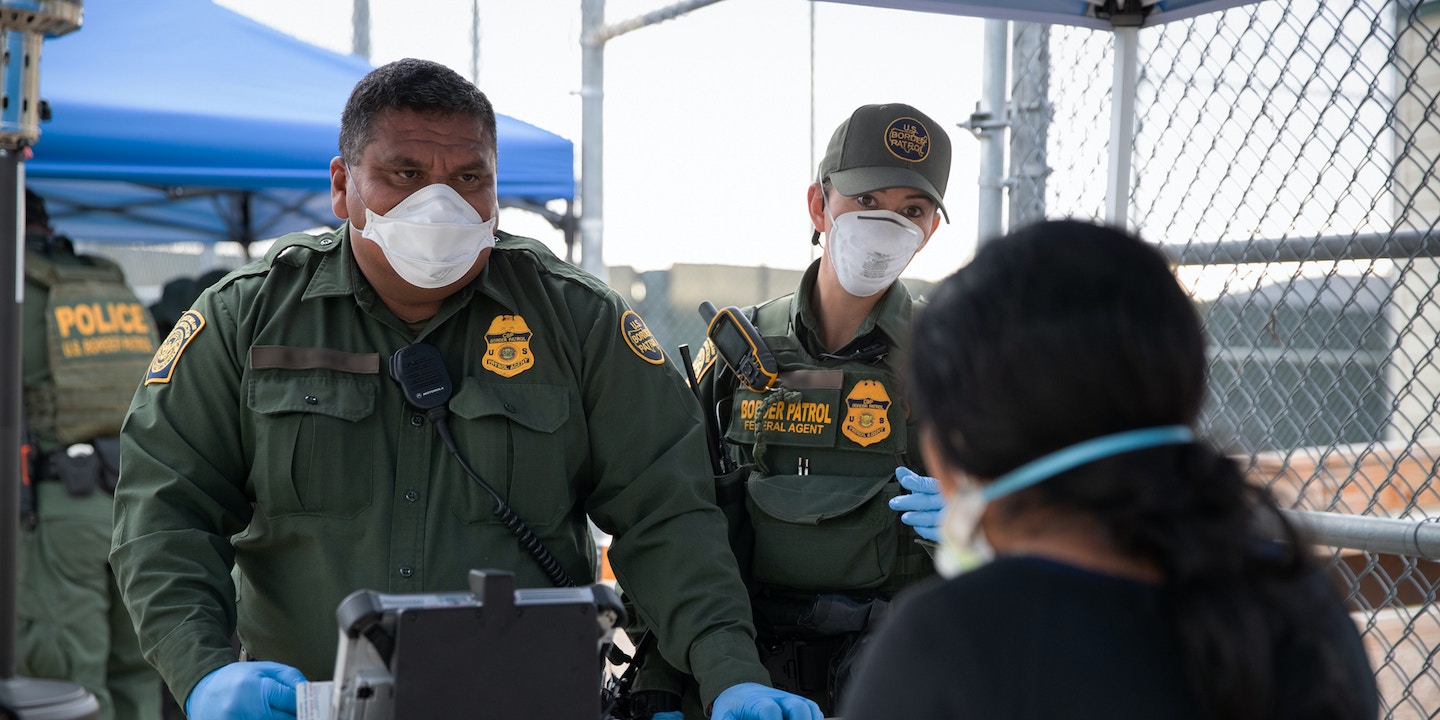 U.S. Border Patrol appeared to get the coronavirus pandemic under control early: As of May, the agency had only reported a single confirmed case of Covid-19 among those in its custody.

There’s a simple reason, however, that the agency’s numbers were so low: Between March and early May, as the pandemic began to rage, the Border Patrol did not test any of its detainees for the coronavirus.

Documents disclosed by the Department of Homeland Security, which oversees immigration enforcement, on Monday show that, between March 7 and May 8, as the pandemic became a nationwide public health emergency, Border Patrol had administered coronavirus tests to a total of zero of the people it apprehended. “USBP has NOT RECEIVED any COVID-19 Tests from any source. USBP DOES NOT conduct COVID-19 Testing of any kind in its temporary holding / processing facilities to date,” the agency wrote in the documents, which came in response to a Freedom of Information Act request.

In the documents, Border Patrol reported that, though it was not conducting any testing, the agency was “aware of 16 detainees in temporary custody being tested for COVID-19 by local medical/health system” between March and May. Of those, one test had come back positive.

DHS did not respond to questions from The Intercept, including whether Border Patrol began testing after May 8. The agency does not publish detainee Covid-19 numbers for any time frame.

According to its website, 1,973 federal employees of U.S. Customs and Border Protection, the Border Patrol’s parent agency within DHS, had tested positive for coronavirus as of September 1, even without a comprehensive testing plan. Eleven of the agency’s employees have died of causes related to the virus.

In March, the Trump administration granted federal immigration agents sweeping powers to rapidly expel anyone at the border, including unaccompanied children, citing the threat of the coronavirus. Of the 378,065 people apprehended by U.S. Border Patrol and DHS’s Office of Field Operation between March and July, 110,107 were returned under this emergency public health measure.

Immigrant advocates have criticized the policy as a risk to public health. Sirine Shebaya, executive director of the National Immigration Project of the National Lawyers Guild, said the universal failure to test people that Border Patrol holds in congregate facilities, transfers around the country, and expels across the globe could contribute to the international spread of Covid-19.

“When they say that they’re doing it under the guise of public health,” Shebaya said, “that’s actually belied by the fact that they’re not testing anyone or putting in place any measures that one ordinarily would, if one were actually concerned about public health.”

Opacity around the prevalence of the coronavirus among detainees exists across federal immigration enforcement operations.

Through a review of internal emails between U.S. Immigration and Customs Enforcement and officials at a private prison company that houses immigration detainees, court documents, and conversations with lawyers and people detained by federal immigration authorities, The Intercept found that Border Patrol and ICE have obscured the true scope of Covid-19’s spread within immigration detention — often by design.

Resistance to testing staff and detained people, sudden releases of ill detainees, and a shadow set of private contractors whose employee health statistics don’t appear among ICE’s aggregate Covid-19 numbers help ICE and Border Patrol officials report to the outside world that they have the virus contained, that immigration enforcement can operate reasonably during a pandemic.

Other than pointing The Intercept to its general information page on the coronavirus, ICE declined to comment, citing pending litigation. Border Patrol and GEO Group, the private prison company, did not respond to requests for comment.

“ICE and these private detention operators know that there really is no safe way to detain people during a pandemic. Obscuring the numbers kind of helps them obscure that fact,” Knox said. “The way to reduce Covid infections is to not detain as many people, or to not detain people, period.”

For instance, between April 23 and July 15, as 305 people detained in California’s Adelanto ICE Processing Center filed written complaints of fever, coughing, chills, and other coronavirus symptoms, ICE tested only one of them for Covid-19, according to information disclosed as part of a court case.

Adelanto officials had plenty of test kits. They just didn’t want to use them. On May 19, the facility’s GEO administrator informed Gabriel Valdez, the ICE officer in charge, that an overnight shipment of 1,900 testing kits would arrive at Adelanto in a few hours, enough to test everyone in the facility twice over. Testing of all detainees was set to begin the following day, according to email records obtained by The Intercept.

Valdez replied, “It’s your call on testing your staff, but until I receive guidance from my chain of command I don’t want any detainees tested through this voluntary process.”

The tests sat in a facility storeroom, banned from use.

ICE and GEO followed the same pattern at the Mesa Verde ICE Processing Center in Bakersfield, California. Internal emails show that, knowing they’d have to release people and halt new arrests and transfers to make room for those who tested positive to quarantine, ICE and GEO officials at Mesa Verde rejected plans for broad coronavirus testing.

“Because they’re not willing to release more people, I guess, they stopped universal testing.”

The same motives lay behind Adelanto’s resistance to testing, said Ahilan Arulanantham, an American Civil Liberties Union attorney suing the federal government over conditions in the facility. “They don’t have enough room to quarantine people — the people who refuse the test and people who test positive — without releasing more people,” he said. “Because they’re not willing to release more people, I guess, they stopped universal testing.”

By the time a federal judge ordered broad testing in Mesa Verde in mid-August, it was too late. An outbreak had already overwhelmed the facility, with more than half of detainees testing positive.

ICE officials and private detention facility operators eschew broad testing until they have no other choice, civil rights attorneys at detention facilities in Virginia, Massachusetts, and California told The Intercept.

“There has to be litigation, there has to be a massive outbreak where everybody is sick, before ICE will take the step of actually testing,” said Shebaya, who’s working on a suit over conditions in Farmville, Virginia, detention center, the site of the worst outbreak in any facility of its kind. “When it was something voluntary, they had tested a grand total of six people across two facilities in Virginia that hold upwards of 500 people.”

Left to its own devices, ICE cannot be trusted to accurately report Covid-19-related statistics, said Monika Langarica, a staff attorney at the ACLU of San Diego and Imperial Counties, in California. At the Otay Mesa Detention Center, ICE initially claimed there were just eight medically vulnerable detainees who might be eligible for Covid-19 release, according to Langarica. The government later confirmed the true number was over 130.

ICE also omits Covid-19 cases among privately contracted detention employees from its staff numbers, which immigration advocates say dramatically underestimate the coronavirus’s true presence at the facilities. For example, while court filings by GEO Group show that, as of mid-August, nearly 25 percent of the 130 employees at Mesa Verde had tested positive for Covid-19, ICE reports zero staff cases in the facility. That’s because almost everyone who works at Mesa Verde is an employee of a third-party contractor.

Sudden transfers of detainees further help to obscure outbreaks, lawyers said. ICE releases detainees to hospitals, where their potential positive tests — and deaths — will not show up in the agency’s numbers, attorneys said. The agency does not publish data on people who contracted Covid-19 while in ICE custody but tested positive or died after being released.

The federal government’s aversion to releasing detainees may have political motives. In April, then Acting ICE Director Matthew Albence testified to Congress that the agency did not plan to let any more detainees go to protect them from coronavirus. Albence explained that such releases could give the impression that the administration was “not enforcing our immigration laws.”

“If it’s clear you have Covid outbreaks in every one of your facilities,” Shebaya explained, it becomes untenable to resist releases and continue aggressive enforcement. “Not testing is a way of keeping the issue from being in the public eye.”