The sting against the so-called Boojahideen had the unusual result of international terrorism charges against domestic extremists. 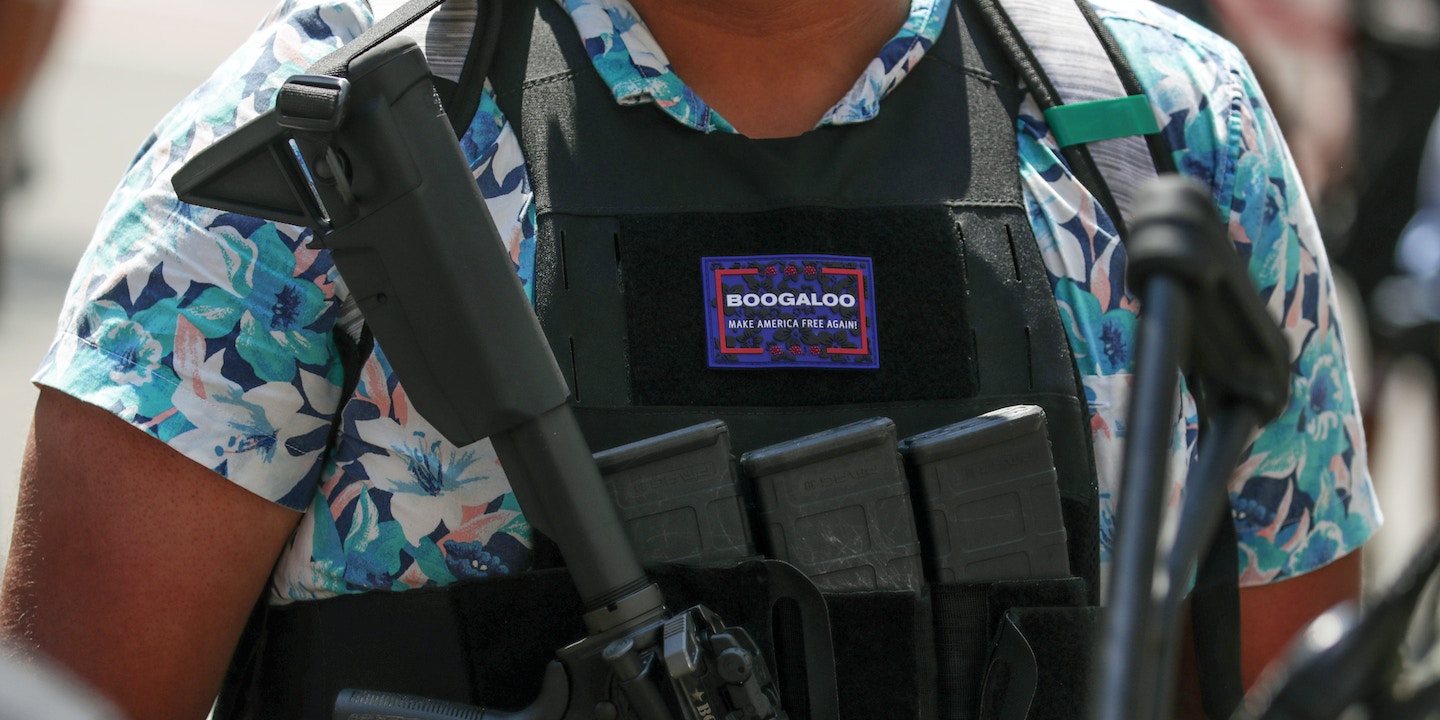 On August 29, in a Minnesota hotel room, Michael Solomon, a pudgy 30-year-old man with a brown scraggly beard, and his pimply faced 22-year-old friend Benjamin Teeter handed over a “drop-in auto sear”: a special part used to convert a gun to fully automatic fire.

Solomon and Teeter were accompanied by two men they believed were members of Hamas, a Palestinian political and militant organization that the U.S. government has designated a foreign terrorist organization. Solomon and Teeter, who had been on the streets of Minneapolis following the killing of George Floyd by police, claimed to be members of a group called Boojahideen — part of the so-called Boogaloo movement, a loosely organized collection of far-right, pro-gun extremists who advocate for civil war and the overthrow of the U.S. government.

The Hamas operatives had enlisted the two men to build parts that could modify weapons. The arrangement was the first in what was supposed to be a growing partnership between Hamas and Boojahideen.

Teeter told the Hamas members that they should test the drop-in auto sear before using it in battle, in order to get a sense of how fast the bullets discharge.

One of the Hamas operatives then asked if the gun part could be used to kill American and Israeli soldiers. “Yeah,” Solomon told him.

About a week later, Solomon and Teeter discovered that their new colleagues weren’t Hamas members.

One was an FBI informant, the other an undercover agent. On September 9, the Justice Department announced an indictment against Solomon and Teeter, charging them with attempting to provide material support to Hamas.

“When we read about this, it was really shocking to connect our movement with such extremists.”

Now Hamas, the group FBI agents were pretending to represent, is publicly denouncing the prosecution and its supposed connection to the two Boogaloo members.

“When we read about this, it was really shocking to connect our movement with such extremists,” said Basem Naim, a Hamas member who is the head of the Council on International Relations in Gaza, in an interview with The Intercept.

This is the first time that a designated terrorist group that the FBI pretended to be has come out publicly to denounce a sting case.

“First of all, Hamas is a Palestinian national movement, and we have limited our struggle for freedom and independence within the boundaries of Palestine, and we have nothing to do outside these geographical territories,” Naim said. “The second thing, we have nothing planned and we are not intending to plan anything against the United States.”

FBI stings such as this are part of a well-worn counterterrorism tactic. Since the September 11 attacks, the FBI has arrested more than 340 defendants who were caught up in counterterrorism stings in which they believed they were supporting the Islamic State, Al Qaeda, or another foreign terrorist organization.

The Boojahideen case did something rare: Over the years, the FBI usually uses foreign terror plots to coax would-be adherents of these foreign groups, whereas in the Boojahideen case, the FBI linked up domestic extremists with a foreign terror group. Under the Justice Department’s normal modus operandi — using something of a double standard — right-wing domestic terrorists do not face terrorism charges.

Still, the use of stings involving foreign-terror plots is still unsettling to some law enforcement and rights experts. Human Rights Watch has critized these stings for often targeting “those with intellectual and mental disabilities and the indigent.” The FBI has long defended its practices by saying that stings allow federal law enforcement to find would-be terrorists before real terrorist groups have the opportunity, but, as in the Boojahideen case, the threats often seem to be concocted by the FBI out of whole cloth in order to initiate charges.

“I fear that the bureau is throwing a lot of effort into resource-intensive sting operations that target only the most gullible individuals in the movement, rather than investigating the multiple examples of far-right violence that are happening in plain sight.”

Michael German, a former FBI special agent and now a fellow with the Brennan Center for Justice, has been a critic of these sting operations. While German didn’t want to pre-judge the Boojahideen case without all the facts at hand, he nonetheless expressed concern that the use of these tactics on far-right terrorists had the same shortcomings. “I fear that the bureau is throwing a lot of effort into resource-intensive sting operations that target only the most gullible individuals in the movement,” German said, “rather than investigating the multiple examples of far-right violence that are happening in plain sight.”

Solomon lived in the suburbs north of Minnesota’s Twin Cities. Teeter was from North Carolina. On May 26, the day after a white police officer killed a Black man by kneeling on his neck for nearly eight minutes, Teeter posted on Facebook: “Lock and load boys. Boog flags are in the air, and the national network is going off.” He then traveled from North Carolina to Minnesota to meet up with Solomon.

As demonstrations started in Minnesota — the first of what would become a summer of unrest in the United States — Teeter and Solomon were patrolling the streets. A witness, who would later be paid by the FBI for information, encountered Solomon walking down the street with a gun. Solomon told the FBI’s witness that he was with Boojahideen, and he was there to protect others from the police, white supremacists, and looters. Solomon and Teeter told the witness that their group’s goal was to overthrow the government and the police.

The Boogaloo movement’s aims are difficult to pin down, since its ideology can vary greatly from adherent to adherent and group to group. Some are white supremacists who view the current unrest as a prelude to a race war. Others, like Solomon and Teeter, do not appear to be racist but are virulently pro-gun and anti-police. Boogaloo adherents refer to themselves as “Boogaloo boys” or “Boogaloo bois,” and during the protests around the country this summer, some wore Hawaiian shirts to connect themselves with the loose anti-government ideology.

Their propensity for violence is not in question. In June, federal and state prosecutors charged three men for their alleged role in a plot to use Molotov cocktails to start a riot at a Black Lives Matter protest in Las Vegas. In California, an Air Force officer and Boogaloo adherent allegedly ambushed and killed one police officer and severely wounded another.

Solomon and Teeter explained to the informant that they were willing to attack protesters in Minnesota, and if the police were called, they’d stick around for a gunfight.

Solomon and Teeter apparently had big plans. They wanted to raise money to purchase a compound where Boogaloo and Boojahideen members could train. They saw Hamas as a possible solution, and the pair allegedly suggested to the FBI informant that they could become mercenaries for the Palestinian organization, earning money from the group by blowing up government monuments and courthouses.

On June 28, the informant introduced the two men to an undercover agent who also pretended to be a Hamas member. Teeter told the undercover agent that he was an anarchist who wanted to remove the government. Solomon, according to court filings, added: “Our goal is to tear it down.”

The undercover agent suggested that Solomon and Teeter make suppressors — which muzzle the sound and light from a discharging firearm — for Hamas. The FBI informant, in turn, gave the two men money for a drill press, which they needed to make the suppressors.

From Solomon’s and Teeter’s statements, it’s clear they lived in a fantasy world. Teeter claimed that they could build untraceable AR-15 rifles and that they had a network of “Boog Boys” who could deliver guns around the country.

When asked what he’d like to do in the future, Solomon told the supposed Hamas members: “Well, for the future, I’d build a gallows … and just start hanging politicians left and right.”

One of the many problems with the fantasy that the FBI constructed for Solomon and Teeter is that Hamas says it’s not interested in any such plots.

“Maybe this is for internal domestic reasons — to create such connections and to attract more voters from the right and the Zionist lobbyist to support the current administration,” Naim, the Hamas member, said. “But this should not come at the expense of our just struggle against oppression, apartheid, and occupation.”