Urged to slow the planet’s warming to save lives, the president said, “I don’t think science knows, actually.” 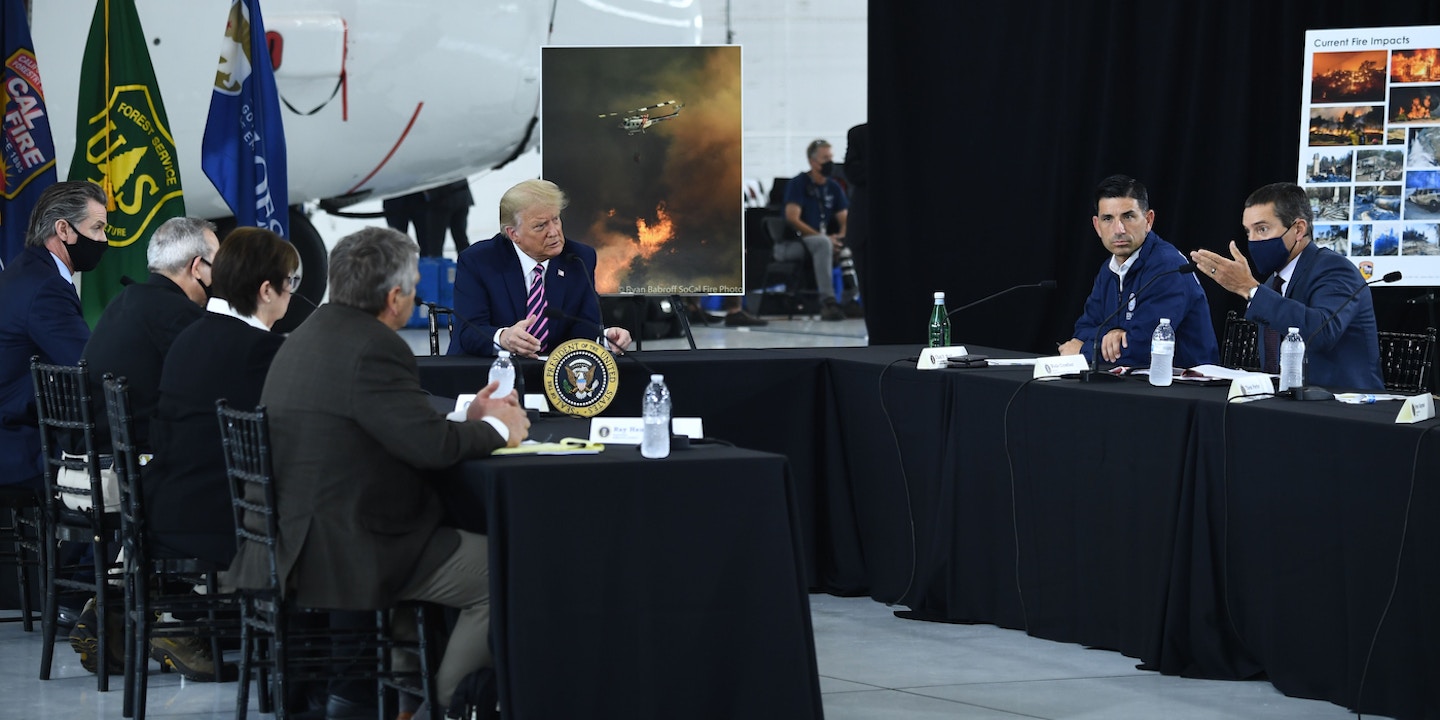 Donald Trump laughed during a briefing on the deadly wildfires in California on Monday, refusing to take seriously the scientific consensus that climate change is a major factor in the blazes currently making it hard to breathe along the entire west coast of the United States.

In a tense exchange at an air base used by firefighters in Sacramento, the president scoffed at an impassioned plea from California’s natural resources secretary, Wade Crowfoot, “to really recognize the changing climate and what it means to our forests.”

“That science is going to be key,” Crowfoot told Trump, “because if we ignore that science and sort of put our head in the sand and think it’s all about vegetation management, we’re not going to succeed together protecting Californians.”

“It’ll start getting cooler,” Trump replied with a smirk. “You just watch,” he added as at least one local official chuckled along with him.

When Crowfoot said, “I wish science agreed with you,” Trump brought the exchange to an end by saying, “Well, I don’t think science knows, actually,” and calling on Cal Fire chief Thom Porter to speak.

The laughter in the room that accompanied Trump’s dismissive tone was a reminder of how very rarely he is challenged or corrected by those around him — even when he is spectacularly, comically wrong.

It was unclear who laughed along with Trump’s blatant denial of climate science, but two local officials seated on the side of the table where the laughter came from were conservatives who, like Trump, were not wearing masks: Fresno County Sheriff Margaret Mims and Ray Haupt, a supervisor from Siskiyou County who is a former forestry service official.

Mims, who refused to enforce the state’s Covid-19 stay-at-home orders earlier this year, has appeared at two previous White House events to praise Trump’s crackdown on undocumented immigrants. Haupt has praised Trump’s White House for inviting him to Washington to talk about increasing timber production from the 57 percent of California forests owned by the federal government.

Porter, the fire chief, was wearing a mask which made it impossible to see if he laughed at Trump’s dismissive comment, but it seems unlikely, based on his clear support for climate science in the past.

Trump, who has previously derided climate change as “a hoax,” was more gently confronted on the issue earlier in the briefing by California’s governor, Gavin Newsom.

“When we’re having heat domes, the likes of which we’ve never seen in our history, the hottest August ever in the history of the state, the ferocity of these fires, the drought — five-plus years, losing 163 million trees to that drought — something has happened to the plumbing of the world,” Newsom told Trump. “We come from a perspective, humbly, where we submit the science is in and observed evidence is self-evident that climate change is real, and that is exacerbating this.”

Unlike Crowfoot, however, Newsom undercut his assertion by not asking Trump to accept that science, but merely to respect what he called “the difference of opinion out here, as it relates to this fundamental issue, on the issue of climate change.”

I'm sorry, but climate change is not a "difference of opinion." It's a matter of science vs those who reject science. pic.twitter.com/AssCXs3G2v

Newsom also thanked Trump for making federal resources available to fight the fires. During the early stages of the Covid-19 pandemic, Newsom was one of the nation’s Democratic governors who secured federal resources for his state by offering Trump lavish praise, which the president then incorporated into campaign ads.

While both Newsom and Crowfoot acknowledged the need for stepped up “vegetation management” in forests, as well as measures to slow warming, Trump has tried to blame the fires entirely on local authorities for not clearing away dead leaves and trees. That’s one reason that Newsom made a point of explaining to Trump that “57 percent of the land in this state is federal forest land,” while just 3 percent is owned by California.

This is the packet @CAgovernor @GavinNewsom gave to @POTUS @realDonaldTrump for his briefing on California wildfires. pic.twitter.com/fEvTEWvW7h

At a campaign rally in Nevada over the weekend, Trump ignored climate change and blamed the fires exclusively on poor “forest management.”

VIDEO: ?? US President Donald Trump says he will visit #California and meet emergency services there as record fires smother the West Coast in dense smog. Trump was speaking at a Nevada campaign event #CaliforniaFires pic.twitter.com/8tLdq4sgr1

Before the briefing on Monday, Trump dodged a question about climate change by again insisting that states in the American west run by Democratic governors were at fault for not emulating Finland’s forest fire prevention system.

In 2018, when he visited the California town of Paradise (which he referred to, twice, as “Pleasure”), Trump wrongly claimed that Finland’s president, Sauli Niinisto, had told him that his “forest nation” had no problem with fires because of the regular raking of leaves from the forest floors.

“They spent a lot of time on raking and cleaning, they don't have any problems.”

President Trump has again blamed forest mismanagement for the deadly wildfires in California, saying they should look towards the 'forest nation' of Finland for answers. pic.twitter.com/lGpgYU59VP

While Finland does make an effort to remove dead trees as part of its fire prevention strategy, Niinisto subsequently denied that he had said anything about raking leaves to Trump.

Scientists point out that Finland’s climate and vegetation are not at all similar to those of California, Oregon or Washington, where wildfires are now burning. Temperatures in Finland, which juts into the Arctic Circle, are far lower than in the western U.S., where hot, dry air, lightning strikes without rain and high winds make wildfires much more frequent. Finnish forests also lack the naturally flammable chaparral wildlands common in the America west, filled with shrubs and small trees that catch fire more easily than tall trees in colder, wetter climates.