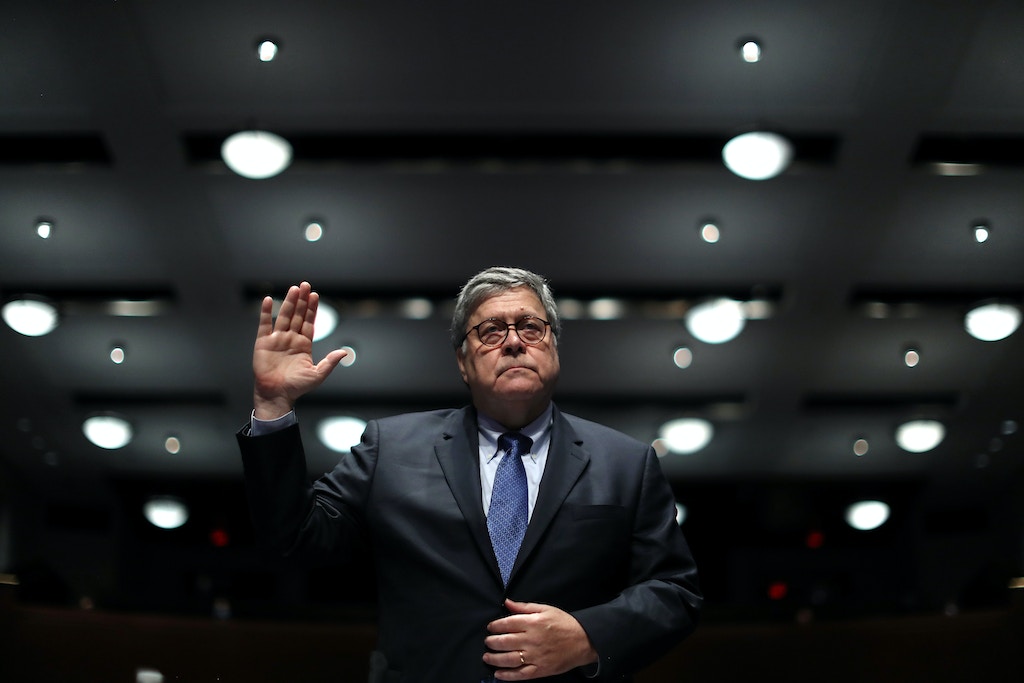 U.S. Attorney General William Barr is sworn in before testifying before the House Judiciary Committee on Capitol Hill in Washington, D.C., on July 28, 2020.

On Saturday night, the New York Police Department arrested nearly a third of a 300-person protest. Demonstrators had gathered in Times Square to call for the abolition of U.S. Immigration and Customs Enforcement, better known as ICE. The protesters did no more than march and chant. They stayed on the sidewalk. Police outnumbered them 3 to 1. One demonstrator told CNN that officers “descended from all sides” and “started ripping people off of the sidewalk.” There were 86 arrests.

In the preceding days, small protest after small protest in New York had been crushed by overwhelming police force and aggressive arrests.

Such is the state of unchecked liberation in this, the “anarchist jurisdiction” of New York City.

There’s no subtlety in Trump’s cynical base-pandering, aided once again by Barr’s Justice Department in service as the president’s private law firm.

Alongside Seattle and Portland, New York City earned the official “anarchist jurisdiction” label from Attorney General Bill Barr on Monday. Other cities under Democratic leadership are likely to be added to this farce of a naughty list, targeting areas where potent antiracist, antifascist protests have erupted this summer. The designations are the latest act in President Donald Trump’s theater of the absurd.

Because of the designation, the localities now stand to lose significant federal funding. There’s no subtlety in Trump’s cynical base-pandering, aided once again by Barr’s Justice Department in service as the president’s private law firm.

Residents of New York, Seattle, and Portland responded with bemusement on social media when they learned that their cities — heavily policed, viciously unequal, racially segregated terminals and repositories of capital — are, in fact, anarchist jurisdictions. “New York City hasn’t been an anarchist jurisdiction since CBGB closed, man,” quipped comedian and writer Josh Gondelman on Twitter. “Reminder: In this anarchist jurisdiction, alternate-side parking rules are in effect,” tweeted MSNBC’s David Gura. There was some heady riffing on whether the horizontalist, anti-hierarchical nature of anarchist organizing makes “anarchist jurisdiction” an oxymoron. “The city is ours! #AnarchistJurisdiction,” Brooklyn-based anarchist community center, The Base, mockingly tweeted.

It is hard not to scoff. There are over 38,000 officers in the NYPD’s standing army. And the department’s budget — even after some toothless cuts in the new city budget — will continue to exceed $5 billion. In June, during New York City’s historic six-night curfew, 1,349 people were detained by police and placed in holding cells, in the midst of a pandemic, for merely being out past 8 p.m. Not to mention that there are, even in New York’s left-wing milieux, very few self-identifying anarchist groups. The city’s new label is laughable.

Yet the material consequences for residents in the designated cities could be all too real. White House Budget Director Russ Vought is set to issue guidance to federal agencies on withdrawing funds from the cities in less than two weeks. The New York Post, which broke the story, noted that “it is not yet clear what funds are likely to be cut, but the amount of money siphoned from New York City could be massive, given the Big Apple gets about $7 billion in annual federal aid.” City coffers, devastated by the pandemic, now face more brutal cuts.

In no uncertain terms, Trump is punishing cities that have, again and again, shown themselves to be hubs of antiracist, antifascist resistance.

There’s an irony in the targeting of funds to governments that have, for the most part, cracked down heavily on anti-racist protesting. Democrats have been all too happy to see antiracist uprisings heavily policed and neutralized. As such, Govs. Andrew Cuomo of New York and Jay Inslee of Washington state, alongside other Democratic state and city leaders, are only superficial targets here.

Some politicians highlighted the hypocrisy in Trump’s move, pointing out that the cuts could hurt their ability to crack down on protests. New York Attorney General Letitia James correctly identified the central aim of the designations — “a pathetic attempt to scare Americans into voting for a commander-in-chief who is actually incapable of commanding our nation” — but added in her statement that Trump “should be prepared to defend this illegal order in court, which hypocritically lays the groundwork to defund New York and the very types of law enforcement President Trump pretends to care about.”

Such is the fulcrum of this bleak debate: Powerful Democrats respond to Trump’s attacks by pointing to the police state that they, too, seek to uphold.

The Democratic officials insisting that Trump’s order is illegal are almost as laughable, in this political moment, as the “anarchist jurisdiction” designation themselves. Trump’s base-baiting speech acts have always served to create new and darker political realities beyond their technical legal scope.

The Justice Department may well have to defend this jaundiced, cynical move in court, but the work it’s meant to do has been done: the fortification of escalating efforts to repress dissent, building on Trump and his Justice Department’s ongoing campaign strategy of groundlessly demonizing “antifa,” while decimating Black lives.