As the climate crisis transforms Montana, the incumbent Republican senator is greenwashing his record. 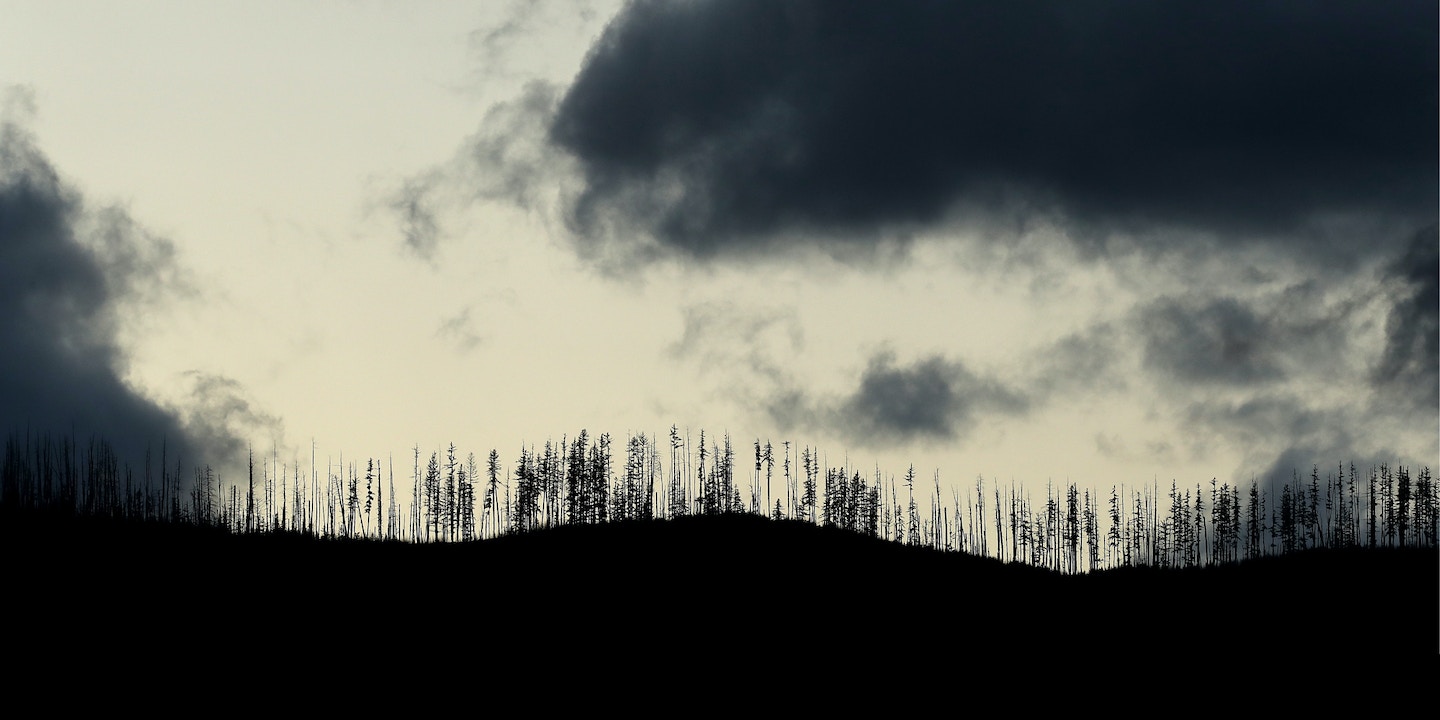 It’s a frequent refrain for Trump, but not only for Trump. A day earlier, Sen. Steve Daines, R-Mont., who is locked in a tight reelection race with Montana’s Democratic Gov. Steve Bullock, had gotten a similar question. And Daines gave a similar response: “Humans play a role in terms of a variable on climate change,” he said, and pointed to bipartisan “forest management” legislation he co-sponsored with Sen. Diane Feinstein, a Democrat from California. The bill would lessen some restrictions on timber harvests but does not meaningfully address the defining role of climate change.

It’s a dual talking point that has become doctrine for politicians seeking to protect the oil, gas, and coal industries from the inescapable reality of the climate crisis — and one that highlights sharp contrasts between the candidates in both the presidential election and the Montana Senate race, one of a handful of battleground elections that will determine whether Democrats or Republicans control the U.S. Senate.

Scientists say that dramatic reductions in greenhouse gas emissions must be made over the next 10 years to avoid the most life-transforming impacts of the climate crisis. Much has been made of how important the presidential election will be in determining whether the scientific guidelines on the climate crisis will be followed. But the contest for who controls the U.S. Senate is hugely important as well, since only Congress can pass ambitious climate legislation needed to confront the problem, and, so far, only Democrats have shown an openness to follow scientists’ urgent appeals.

With the House of Representatives likely to remain under a Democratic majority, a handful of close Senate races, like the one in Montana, are poised to define the U.S.’s climate change policies.

“Montana is one of our best opportunities to net a pro-environment Senate seat. The race is neck and neck with most polls showing it within the margin of error.”

“If Biden and Harris win the White House, we need to net three Senate seats in order to flip to a pro-environment majority,” said League of Conservation Voters National Press Secretary Emily Samsel, referring to the Democratic presidential ticket of Joe Biden and Sen. Kamala Harris of California. “Montana is one of our best opportunities to net a pro-environment Senate seat. The race is neck and neck with most polls showing it within the margin of error.”

Daines is betting the race against Bullock on convincing Montanans that he will protect the state’s iconic lands and waters. His campaign ads feature sweeping images of Montana’s spectacular mountains and rivers and snapshots of the senator’s fishing and hiking trips. Daines has repeatedly touted his recent role in passing a law providing permanent funding for the popular Land and Water Conservation Fund, which uses money from offshore oil production to pay for conservation projects.

But much of the senator’s record undermines his claims of protecting public lands. In years when he wasn’t running a tough reelection campaign, he voted against reauthorization for the LWCF and to cut its funds. Nothing, however, reveals the senator’s shortcomings on the environment like his refusal to address the climate crisis, instead working to serve the industries hastening it.

Enter the “forest management” trope, a favorite theme throughout Daines’s Senate tenure. He has repeatedly blamed “environmental extremists” for wildfires, claiming that without environmental groups’ lawsuits, “tree thinning” could benefit the timber industry while simultaneously quelling the fires — a win-win situation.

It’s a scenario that does not match reality, said Cathy Whitlock, director of Montana State University’s Paleoecology Lab and lead author of the landmark Montana Climate Assessment. “It’s really easy to say that our forests are mismanaged, and that is the cause of these fires, but that’s just not true,” she told The Intercept. “These large fires are climate-driven.” Montana has already heated faster than the rest of the nation. Average temperatures have gone up 2 to 3 degrees depending on where you are in the state and have already melted most of Glacier National Park’s namesake glaciers, made streams too warm for fishing during certain periods, shifted elk migration patterns, and exacerbated wildfires that destroy homes and businesses.

At the heart of the Montana Climate Assessment are two different options for Montana’s future, which depend solely on how much fossil fuel emissions are reduced. On one end of the spectrum, scientists examined what would happen if, within 10 to 20 years, across the entire globe, humans have stopped adding any new carbon dioxide to the atmosphere. By 2100, temperatures would still rise more than 5 degrees, the study found, and Montanans would deal with between a week and a month of additional days at or above 90 degrees.

On the other end of the spectrum, the scientists looked at what would happen if current fossil fuel use persists, something that remains very possible despite tepid moves to cut emissions. Under the business-as-usual scenario, Montana temperatures could rise nearly 10 degrees, and residents will get between 34 and 54 more 90-degree days. Not only would the rises mean that those who cannot afford air conditioning will experience more oppressive heat, but one of the state’s leading industries, agriculture, would also be deeply affected. “In terms of agriculture, it will mean a lot,” said Whitlock.

“My granddaughter — boy, she’s going to live in a different world, and I’m not sure I will be able to share anything I enjoy with her.”

In the business-as-usual scenario, rising temperature would mean between 55 and 70 fewer below-freezing days, meaning much less snow. “The snow is like a water tower at the tops of our mountains. As long as you can keep things in snow, and melt the snow slowly, then you have water through the spring and into the middle of the summer,” Whitlock explained. “If you don’t get that snow, because it turned to rain, it will be lost from that water tower really quickly. So we end up with water towers that are not as full, and they’re also draining really fast.” By the time the hot days come, water sources will already be dry, so droughts will be more severe and fires will burn more intensely.

Climate change will affect the state’s legendary landscape for outdoor recreation — from snow sports to fishing to just hiking and camping in the mountains — especially without proper management. And crises elsewhere could lead to climate refugees arriving in cooler, high-altitude Montana, which could in turn bring economic growth but also strains on resources. The state will be transformed.

“My granddaughter — boy, she’s going to live in a different world, and I’m not sure I will be able to share anything I enjoy with her because everything is changing so fast,” said Whitlock. “We’re really at the point where we need action now.”

As Monday’s debate continued, Daines, who has accepted $467,049 in oil and gas donations during the 2020 election cycle so far, suggested that “American innovation” was already leading to sufficient emissions cuts. “We need to keep coal, oil, and natural gas in this all-of-the-above energy portfolio,” he said.

The science disagrees. “It’s pretty clear that we have to just get off of using fossil fuels and move to renewables by midcentury,” Whitlock said.

A letter from Daines to Trump in 2016, when he was transitioning to the presidency, demonstrates how unlikely the Montana senator is to do the work to reduce emissions. He provided a list of policy moves he hoped the president would make. Daines urged Trump to kill the Clean Power Plan, the Obama administration’s primary policy to address the climate crisis; end the moratorium on federal coal leasing; approve new coal export terminals; eliminate a rule that would reduce pollution from methane, a major greenhouse gas; and approve the Keystone XL tar sands oil pipeline, a project that is key to allowing Canadian companies to continue to pump out some of the most high-polluting oil in the world. Trump followed through on almost all of those requests. Montana Gov. Steve Bullock, left, and Sen. Steve Daines, R-Mont., prepare their notes before the beginning of their televised debate at the KUFM-TV studio in Missoula, Mont., on Sept. 28, 2020.

Steve Bullock, Daines’s opponent, is not exactly an environmentalist icon. He accepted $32,103 in oil and gas donations during his failed campaign for president and $63,310 for his Senate campaign. As governor, he allowed construction to move forward on the Keystone XL pipeline during the height of the pandemic, and, during his presidential bid, he said he was open to supporting the project “if it’s done right” — something Indigenous-led opponents of the pipeline say is impossible. Bullock has also declined to support the package of climate and economic polices known as the Green New Deal; does not want to ban oil and gas drilling on public land; and does not support a fracking ban.

“Both candidates proudly assert their Montana roots,” Whitlock said, “and it’s really time for us to get serious about the next generation.”

However, as governor, he did launch the Montana Climate Solutions Caucus, which issued a plan last month with dozens of concrete steps the state will make to address the crisis. And he filed a successful lawsuit to oust the acting director of the federal Bureau of Land Management, William Perry Pendley, who had been put in charge of managing federal lands for more than a year without ever being confirmed by the Senate. In 2016, Pendley called for the sale of nearly all — if not all — federal public lands to the states, a move that would pave the way for extractive industries. (Neither the Daines nor Bullock campaigns responded to requests for comment.)

In contrast to Bullock, Daines supported Pendley’s appointment as recently as 2019, but declared that he was undecided on Pendley’s nomination as the acting BLM director’s popularity sank.

Shifting away from fossil fuels won’t be easy for Montana: The state’s tax revenue is heavily dependent on the fossil fuel industry. “There’s going to be some tough transitions for some economies in the state, but there are huge opportunities for economic innovations,” Whitlock said. “We have our head in the sand if we think coal is going to be prominent in our future, and we need to help those communities dependent on it transition out, so they can be successful.”

“Both candidates proudly assert their Montana roots,” Whitlock said, “and it’s really time for us to get serious about the next generation.”