Democratic wins for the presidency and the Senate could hinge on an absentee-ballot snafu affecting tens of thousands of voters. 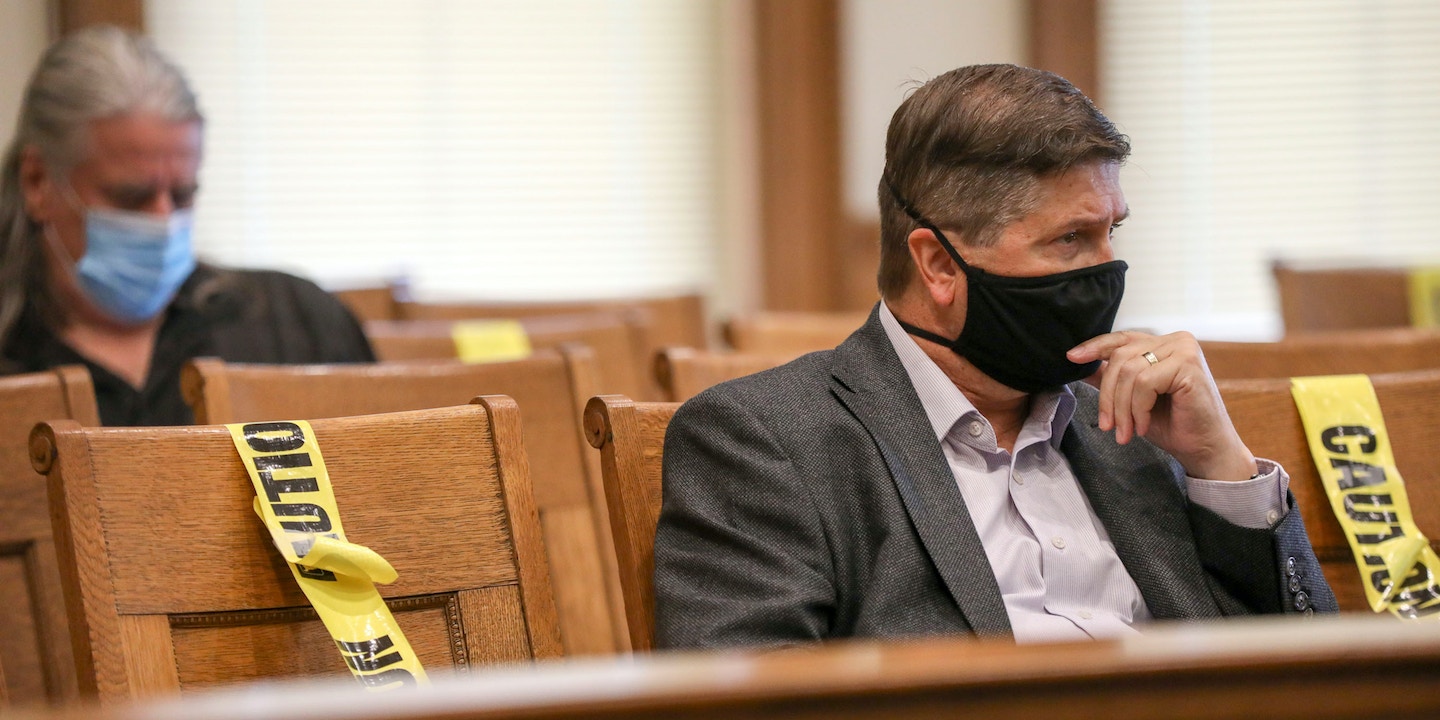 In 2018, Democrats won three of Iowa’s four congressional districts, picked up five seats in the state House, and lost the governor’s race by less than 3 points. The state has only trended more Democratic since, giving the party real hope that its six electoral votes could wind up in the camp of Joe Biden and that its Senate seat, now held by Republican Joni Ernst, could flip to Democrat Theresa Greenfield.

It may all hinge, however, on an absentee ballot snafu affecting tens of thousands of voters that the party is scrambling to rectify.

In July, the top elections officials in Linn and Johnson counties went ahead and began mailing out absentee-ballot request forms with some voter information already filled in, like names and dates of birth. Crucially, voters need to know their voter ID number. Most don’t, and Linn County Auditor Joel Miller had the state’s vendor fill it in for them. Republicans protested, and courts sided with the GOP, saying that Miller’s decision to proceed with the mailing violated a “clear directive” from Iowa Secretary of State Paul Pate.

More than 100,000 absentee ballot requests have already been invalidated in several Iowa counties. In late August, judges ordered two Iowa counties to invalidate at least 64,000 ballot requests, siding with a challenge brought by President Donald Trump’s reelection campaign and the GOP, which have been filing similar lawsuits nationwide. About 50,000 voters in Linn County and at least 14,000 in Woodbury will be informed that their absentee-ballot requests won’t count and that anyone who still wants to vote by mail in November will have to send in a new form in order to receive their ballot. In a separate case in Johnson County, home to the University of Iowa, more than 92,000 ballot request forms were voided.

Miller told Bleeding Heartland, a blog covering Iowa politics, that his research indicated that neither the secretary of state nor the legislature had the authority to stop his mailing; Miller was simply “trying to make it easy for people to vote while reducing their exposure to others in a pandemic,” he said. The Iowa Democratic Party, along with the Democratic Senatorial Campaign Committee and Democratic Congressional Campaign Committee, are suing Pate for issuing a directive saying that county auditors could only distribute blank absentee-ballot request forms to voters. Democrats argue that using these prefilled request forms, which included some personal information and voter identification numbers to make the process as easy as possible, was “entirely lawful under the Iowa Code and the Iowa Constitution.” No hearing has yet been set.

Then, early last week, a fourth judge sided with the Trump campaign and Republican Party, upholding a recent law making absentee voting harder in Iowa. The law, which was pushed by Republican state lawmakers this summer, complicates and slows down procedures for processing absentee-ballot requests, making it needlessly difficult for county auditors trying to get voters their ballots in time.

The opinion released last Monday was in response to a lawsuit filed by the League of Latin American Citizens of Iowa and Majority Forward, which asked the court to stop the enforcement of HF 2643, an appropriations bill that included a last-minute provision requiring county auditors to directly contact a voter within 24 hours of receiving a ballot request with missing information. Instead of using information that’s readily available in the voter registration database to correct incomplete forms, election officials will be expected to contact the voter by phone, email, or letter to get them to provide the information.

Democratic Party officials are scrambling to make contact with the voters who think they have an absentee ballot on the way, concerned that whatever communication the county sends them won’t get through. Reaching each person is an expensive proposition but not impossible.

The three Iowa counties hit with the Republican suit are tasked with tracking down all the voters who aren’t aware that their absentee-ballot request was rejected, and walking them through the process again — with just a few days until absentee ballots start getting mailed out. Iowa state Sen. Zach Wahls said Democrats are concerned with the changes happening so close to the presidential election, which was a “proactive decision” by the Trump campaign to “create this confusion among voters who they knew would be disproportionately … Democratic.” He noted that the counties encompass primarily urban areas, more densely populated areas that have been concerned about the spread of the coronavirus.

J.D. Scholten, who’s competing in a tightening race against Republican state Sen. Randy Feenstra in the state’s 4th Congressional District, a deep-red district he nearly flipped in 2018, said the Woodbury County Democrats have already hired someone to track down the ballot requests.

The state’s shifting politics are the result of a number of structural factors, some within the control of Trump and some not. His trade war with China has hit Iowa hog farmers and soybean growers directly, though its political effect is balanced by public support for confronting China’s trade practices. Perhaps more damaging has been the plummet of corn prices. In 2012, prices hit $8 a bushel, but by 2014, they had fallen to less than $4. As the pandemic hit, prices fell further, approaching $3 a bushel this past spring. They’ve since rallied, recovering some losses, but the volatility and the collapse led to the shuttering of many of the state’s ethanol plants. Iowa has outsized political power as a result of hosting the first-in-the-nation caucuses — in which Biden finished fourth — and used that political clout to shape the country’s ethanol policy, requiring retail gasoline sellers to mix their product with corn-based ethanol, creating a market for the crop. That, in turn, has reshaped Iowa’s economy, which now devotes a significant amount of its acreage to growing corn designed specifically for producing ethanol. With the plants shut down, farmers have little recourse, creating misery and economic disruption.

That misery comes on top of the derecho that ripped through the state in August, devastating 14 million acres of farmland, some 40 percent of the state’s output. With 140-mile-per-hour winds, the storm was highly unusual. Whether it was fueled by climate change is hotly debated, but extreme weather events and economic destruction tend to do political damage to incumbents. The state has also seen more than 1,000 deaths from Covid-19 and more than 90,000 cases.

According to the secretary of state’s office, absentee-ballot requests in Iowa are nearly five times higher than they were in 2016, and Democrats have requested twice as many ballots as Republicans have as of last week. Over 1.6 million Iowans voted in the 2016 presidential election and in typical election years, about 40 percent of votes are cast with an absentee ballot.

“Is Iowa going to be the deciding factor in the presidential race?” Wahls said. “That’s not necessarily unlikely. But could we decide the balance of power in the Senate? Theresa Greenfield could quite possibly be the difference between a Democratic majority or not, and that’s a big deal.”

Biden and Trump are neck and neck in Iowa, according to polling averages, while recent surveys show Greenfield holds a slim lead over her Republican opponent, making the race one of the best pickup opportunities for Democrats. One head-turning poll from this week found her up 12 points.

In battleground states across the country, Trump’s reelection campaign, along with GOP officials and groups, has mounted legal challenges to try to make it harder to vote, attacking a range of local and state voting policies with varying degrees of success in states like Pennsylvania, North Carolina, Nevada, Iowa, and more.