More than 210,000 Americans are dead in a pandemic that traditional national security experts did little or nothing to warn us about. 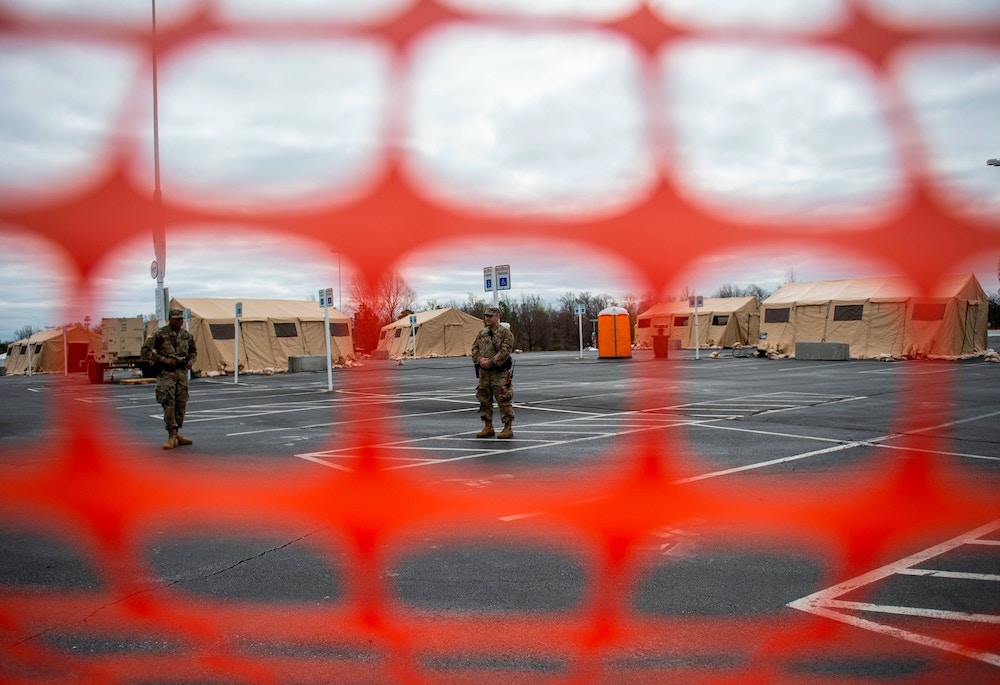 Security from the Maryland National Guard stand in a mobile testing site for Covid-19 that is being set up in cooperation with the Maryland Department of Health in Landover, Md., on March 24, 2020.

Nicholas Burns, who worked in both the Bill Clinton and George W. Bush administrations and is now an adviser to Joe Biden’s presidential campaign, was tweeting by 7:30 a.m.: “With the President’s illness amid a divisive campaign, we should not discount the possibility that China will step up pressure on Taiwan or Russia seek to take advantage in Eastern Europe.” By early afternoon Foreign Policy magazine was asking, “Will Trump’s Case of COVID-19 Endanger U.S. National Security?” Soon Stephen Hadley, once Bush’s national security adviser, was fretting that “some adversaries may think that America may be distracted, so that they can get away with something.”

Since World War II, these experts have grown used to dominating U.S. politics with ceaseless, lurid warnings about the terrifying dangers we face. First it was the Soviet Union, then China, then Vietnam, then “terror,” Iran, Saddam Hussein, “terror” again, North Korea, Russia, and, now and always, “terror.” In each case, it turned out that the only way to save ourselves was to fork over more money to defense corporations.

But for the past six months, as the coronavirus exploded across America, D.C.’s foreign policy thinkers have experienced something novel for them: irrelevance. Covid-19 has killed over 210,000 of us, more than 9/11 and the Vietnam, Korean, Iraq, and Afghanistan wars combined. Dr. Anthony Fauci, director of the National Institute of Allergy and Infectious Diseases, recently warned that that number may reach 400,000 — that is, as many Americans as died in World War II — if we don’t take the necessary actions this fall and winter.

“The national security threat has arrived on our shores: It is the virus,” said Stephen Wertheim, co-founder of an anti-interventionist think tank called the Quincy Institute for Responsible Statecraft, and author of “Tomorrow, the World: The Birth of U.S. Global Supremacy.” Yet for the last half-year, the traditional national security experts were not being invited so much on “Meet the Press” nor quoted by the New York Times. They had been wrong all along about what actually threatened Americans.

The national security experts believe that we should focus on amorphous threats from enemies somewhere out there in the hazy mist.

With Trump’s diagnosis, the mandarins displayed a palpable sense of relief. Here at last was a chance to break out the old hymnal and sing the only songs they know. Americans might think that the danger of two-thirds of the Trump administration entering quarantine would be that they’d be even more incompetent at suppressing the coronavirus. All normal people might have their minds right now on concrete issues, such as the availability of testing or whether it’s safe for their children to go to school.

The national security experts, however, believe that we should focus on amorphous threats from enemies somewhere out there in the hazy mist. Why did Trump have to take a joyride outside Walter Reed hospital? Because “optics matter right now,” according to one unnamed administration official. “Shows of strength and resilience are crucial. For the American public, but also those watching abroad.” The others are out there, ready to pounce, but were intimidated by Trump’s ability to ride around briefly in an armored SUV, exhaling on the Secret Service agents sealed inside with him.

“Commentators are displaying a uniquely American pathology,” explained Wertheim. “There appears to be no event that could happen in the world that would not cause the foreign policy establishment to respond by arguing that the U.S. military must do more and be given more money to do it.”

In April 1953, President Dwight D. Eisenhower delivered what is called his “Cross of Iron” speech. It included what are, apart from his warning about the military-industrial complex as he left office, his most famous words.

“Every gun that is made,” Eisenhower said, “every warship launched, every rocket fired signifies, in the final sense, a theft from those who hunger and are not fed, those who are cold and are not clothed. This world in arms is not spending money alone. It is spending the sweat of its laborers, the genius of its scientists, the hopes of its children.” Specifically, “the cost of one modern heavy bomber is this … two fine, fully equipped hospitals.”

Things have changed since then, of course. The Pentagon now famously projects that the F-35 jet fighter will cost a total of $1.5 trillion over the program’s life. With the government planning to purchase about 2,500 F-35s from Lockheed-Martin, the price for each individual plane works out to $600 million or so. That’s the cost of six present-day hospitals.

The decadeslong theft that Eisenhower foresaw — the theft of what we now know we desperately need, hospitals and food and the genius of Americans — was largely carried out by our national security experts. You can understand why they’re so anxious that we don’t notice this, and why they’re desperate to get things back to normal so the heist can continue.