A Desperate Trump Rallies in Iowa as He Cancels Ads, Loses Ground

The grim reality of the coronavirus pandemic is hanging over the president’s proof of life tour. 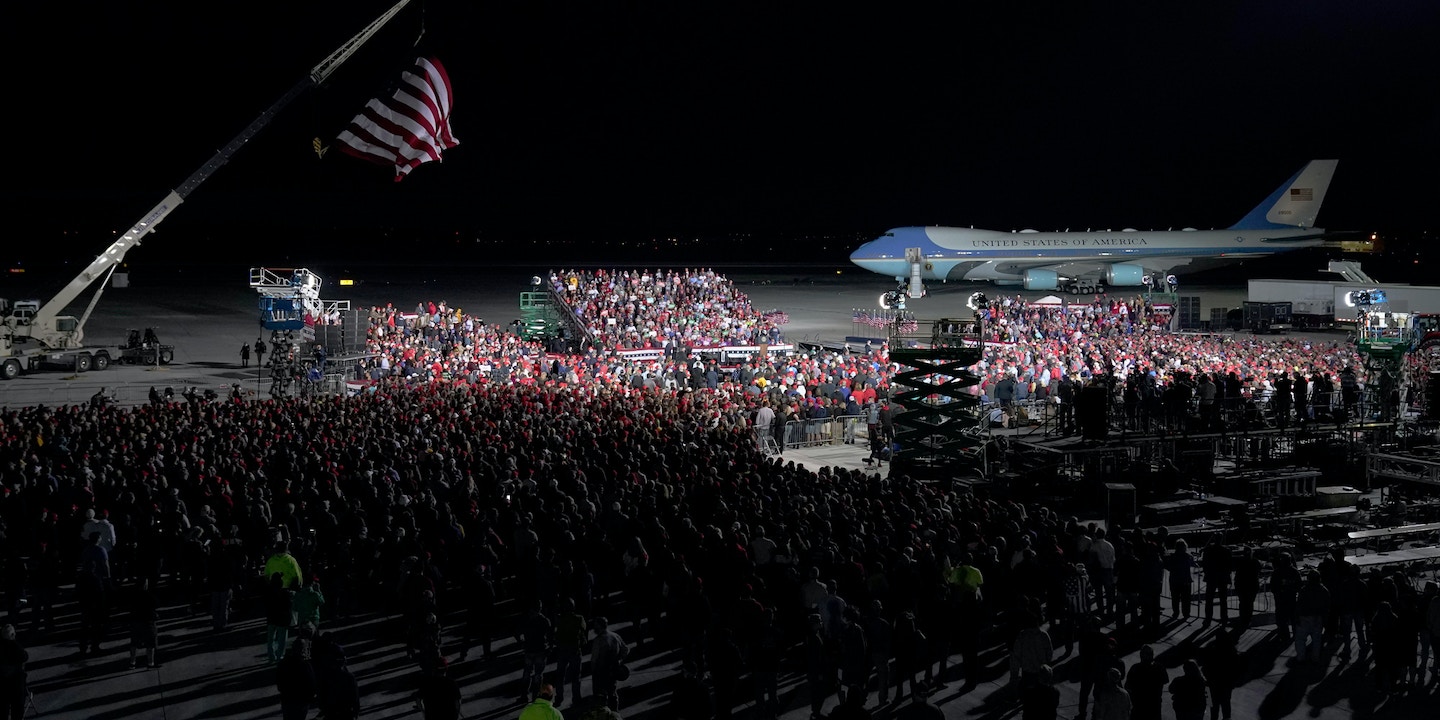 “I told the first lady, ‘I’m going to have the greatest publicity I’ve ever had tonight.’” President Donald Trump told the crowd on the tarmac of the Des Moines International Airport on Wednesday night. “I got nominated for the Nobel Prize. I get home and turn on the TV. They’re talking about your floods in Iowa.”

Of course, there was no major flooding in Iowa this year. Trump was complaining about the lack of media coverage for his Nobel nomination, but he confused the disastrous flooding Iowa experienced in 2019 with the derecho that struck in August. Along with the coronavirus, the disastrous derecho wind storm that destroyed hundreds of thousands of acres of crops have increased farmers’ desperation.

Trump came to Des Moines in an attempt to invigorate his base and swing momentum back in his favor as Election Day approaches. According to the most recent polls, Trump is neck and neck with former Vice President Joe Biden in Iowa, though he handily won the state by 9 points in his 2016 race against Hillary Clinton.

It was Trump’s first visit since the Iowa caucuses at the beginning of 2020, a pre-coronavirus event now most notable for hosting Kyle Rittenhouse, the vigilante shooter who killed two protesters in Kenosha, Wisconsin, in the front row. But though the crowd was buoyant, the grim reality of the coronavirus pandemic seemed to hang over the event: The January rally drew thousands, but this time Trump drew a crowd of just over 1,000, the majority of whom remained unmasked. A billboard mockingly calling the Trump rally a “superspreader event” was erected near the airport by Rural America 2020, a political action committee targeting Trump in rural states.

And, elsewhere in Iowa, there have been hints of waning support for the president as Trump slumps in the polls and local Republican proxies like Sen. Joni Ernst and Gov. Kim Reynolds see precipitous drops in their approval ratings. Facing a campaign cash crunch, the Trump campaign has withdrawn planned television and radio advertisements in Iowa just weeks before Election Day, along with ads planned in Ohio and New Hampshire.

If he loses Iowa, it will be seen as a referendum on his national response to the coronavirus. Few states have embodied Trump’s mandate to “not be afraid” of Covid-19 like Iowa has. Since the early days of the pandemic’s spread through the United States, Iowa’s unified Republican state government and particularly its governor have been lockstep with Trump, refusing to institute a statewide mask mandate and keeping masks optional for in-person learning. Iowa surpassed California in cases-per-million in early September and hasn’t looked back. Supporters take pictures as President Donald Trump arrives for a rally at the Des Moines International Airport in Des Moines, Iowa, on October 14, 2020.

The absence of a mask mandate has resulted in “unnecessary transmission and deaths,” according to reports from Trump’s own White House. Iowa has counted over 100,000 confirmed cases of Covid-19 and over 1,500 deaths as a result in a state with a population that barely tops 3 million. Health care is consistently cited by Iowa voters as a major issue, and the pandemic has only exacerbated already present issues in the state’s privatized Medicaid and led to layoffs at hospitals. The two days prior to Trump’s arrival in the state saw new records for coronavirus-related hospitalizations.

The state government, which has consistently affirmed its support for Trump’s coronavirus strategy, is also losing popularity. An Iowa poll from September gave Reynolds a 47 percent approval rating — a 15-point drop from before the pandemic. The same poll showed Iowa women, in particular, favoring Biden over Trump in the upcoming presidential election. And Republican Sen. Joni Ernst is in a tight race for reelection this November against progressive Theresa Greenfield, and faces consistently worse polling numbers than Trump despite her presence on the same ticket. Polling has shown that Democrats are the preferred candidate in three of Iowa’s four congressional districts and leading by double digits in two of the districts.

If there was a lodestar of the speech, it was Trump’s continual insistence that he was the Iowa farmer’s savior.

After months of lax safety protocols at the White House, Trump was sidelined in early October when he contracted the coronavirus. Even as he embarked on his proof of life tour this week, a trip that has included visits to Florida and Pennsylvania, it still hasn’t been entirely clear whether the president may still be vulnerable to the effects of the virus or even if he may still be contagious.

Trump’s erratic speech started with a tirade concerning the report published by the New York Post earlier that day that used dubiously obtained materials to make claims about Biden’s son Hunter’s business dealings in Ukraine and included a sidebar about the lack of media coverage around his Nobel Prize nomination. But if there was a lodestar of the speech, it was Trump’s continual insistence that he was the Iowa farmer’s savior, painting himself as their defender in the trade war with China and proudly touting a claim that he gave Iowa farmers $28 billion in subsidies.

“We have a great history here, what we’ve done for you, what we’ve done for farmers, what we’ve done for everyone,” Trump said in his speech. “Two weeks ago, you had the largest order of corn in the history of our country.” It’s true that China ordered a record amount of corn, but the amount still fell short of trade deal targets as the price of corn continues to fall. Many farmers are frustrated with the dwindling returns as they continue to face hardship from the growing amount of climate change-related severe weather.

That farmers will continue to be reliant on ongoing payouts are a key part of Trump’s reelection strategy. Trump has funneled approximately $46 billion in cash to U.S. farmers this year, propping them up to prevent them from souring on him during his trade war. His monetary support through subsidies and use of Agriculture Secretary Sonny Perdue as de facto representative of his campaign has been so blatant that it has drawn accusations of ethics law violations.

For all of her devotion to Trump’s coronavirus strategy, Reynolds was not well-rewarded in Trump’s speech Wednesday evening, though she spoke immediately preceding his arrival. The president had more effusive praise for Reynolds’s predecessor, Terry Branstad, who had recently abdicated his quiet role as ambassador to China in order to help out Republicans on the campaign trail in Iowa. He found plenty of opportunity to talk up Reynolds’s husband, Kevin Reynolds, who apparently had been on a hunting trip with his son, Donald Trump Jr. Trump also spent more time praising Sen. Chuck Grassley than the Iowa senator on the November ballot, Ernst.

In his speech, Trump did little to address the ongoing problems of the pandemic, referencing it only to claim that it had been a speed bump in “the best economy of all time” and to claim that he was already miraculously drawing the country out of the economic downturn. And despite being hospitalized for Covid-19, he lectured that “the cure can’t be worse than the problem itself.” When Trump invited Dan Gable, an Iowa wrestling legend whom he plans to award the Presidential Medal of Freedom, to the stage to praise the president, Trump gripped his shoulder and repeated claims he’d made previously that he was now “immune” to the coronavirus.

The few who showed up for Trump, of course, were largely indifferent to the idea of potentially contracting the coronavirus from the event. Bernard McDonugh, an older man, said he considered the threat of the virus to be overblown and cited the strong wind at the outdoors event as a reason to feel safe. Another woman, decked out in head to toe “Make America Great Again” regalia, said she had a mask, but didn’t like to wear it when she was talking. Attendees often recognized and embraced one another. No one in the crowd showed any reluctance to crowd close to one another, something that security and event coordinators encouraged.