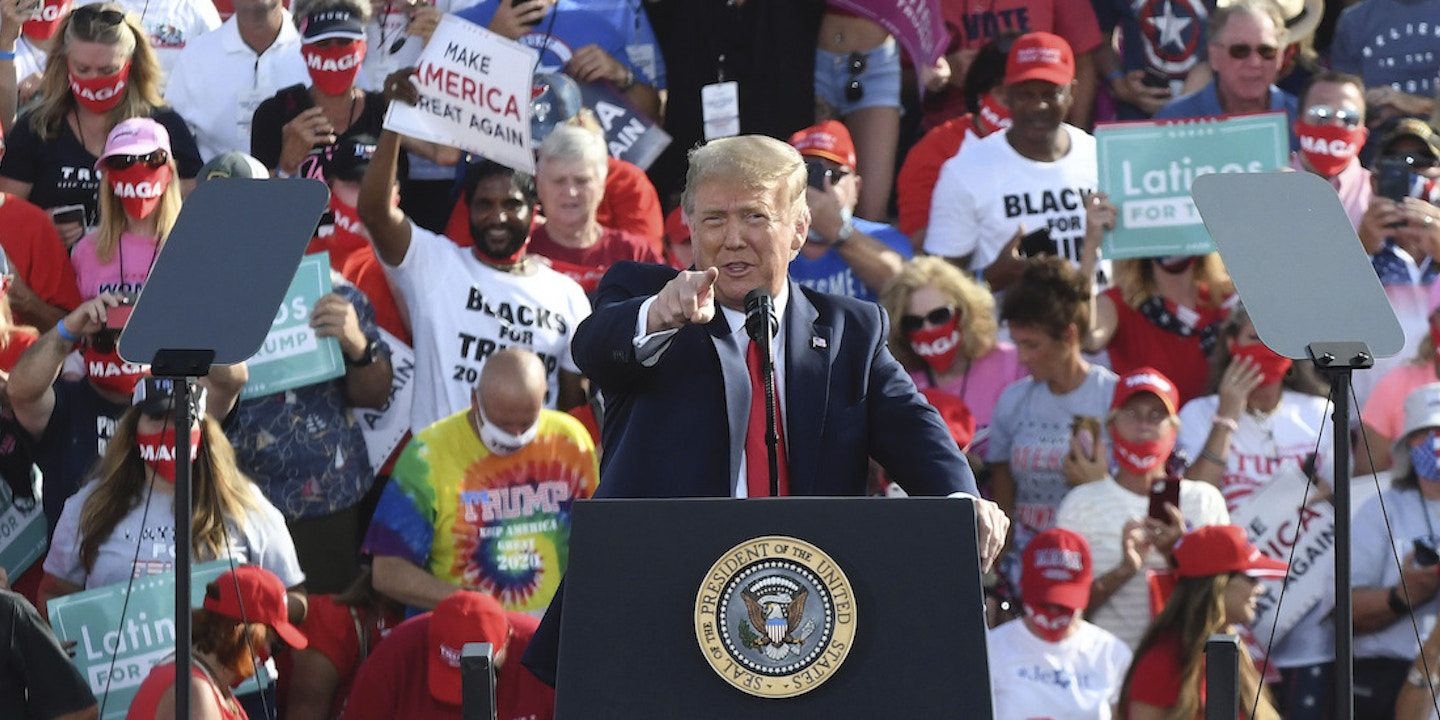 At a packed campaign rally in Ocala, Florida, on Friday, as President Donald Trump delivered a xenophobic rant against Rep. Ilhan Omar, the Minnesota Democrat who fled Somalia as a child, a Black supporter in the bleachers behind him could be seen on television rising to his feet and cheering.

The man was “Blacks for Trump” founder Maurice Symonette, a.k.a. Michael the Black Man, a former member of a violent cult who posts anti-Semitic screeds and racist conspiracy theories online, and yet has been a featured member of the audience at Trump campaign events since 2016.

On his website, Symonette makes a variety of bizarre claims, including that Omar and other prominent Black Democrats, artists and athletes — including former President Barack Obama, Jesse Jackson, Spike Lee, Colin Kaepernick, and Rep. Maxine Waters, D-Calif. — are “DECEVING [sic] FAKE BLACK PEOPLE WHO ARE REALLY INDIANS!” In a sermon now deleted from YouTube, he claimed that the Senate is controlled by a secret underground of “Cherokee Mormons.”

The rally on Friday was the second time in five days that Symonette and one of his followers, both wearing T-shirts emblazoned with the group’s name, occupied prominent positions in television coverage of Trump. Symonette, who appeared behind the president’s right shoulder at the rally in Ocala, was just to Trump’s left in the live coverage of his rally in Sanford, Florida, last Monday. “Blacks for Trump” founder Maurice Symonette appeared behind President Donald Trump at a rally in Sanford, Fla., on Oct. 12, 2020.

Symonette was known as Maurice Woodside until 1992, when the black supremacist cult leader he followed, Yahweh ben Yahweh, was jailed for leading a conspiracy to murder 14 white people in initiation rites. Woodside was among the Miami-based Nation of Yahweh cult members charged in two of the murders, but he was acquitted. After the trial, he changed his last name to Symonette, which was his father’s surname, before eventually reinventing himself as Michael the Black Man, a pirate radio preacher who delivered broadsides against gays and Democrats.

His online sermons and writings suggest that he still sees himself as a follower of the cult leader, who died in 2007. In July, for instance, he declared on Facebook that he had received a divinely inspired cure for Covid-19 from the late cult leader. “I Michael can teach & give the World & Pres. Trump the Conquerer of Pharaoh the gift from YAHWEH BEN YAHWEH which is the true cure for Corona,” Symonette wrote. Before turning over this cure, he added, “we must remove the Conquered Pharaoh Magician’s FAUCI.”

For years before Trump emerged as a candidate, Symonette had been trying with less success to use campaign rallies as a vehicle to spread his strange hybrid of politics, religion, and delusion.

During the 2008 presidential campaign, Symonette and about a dozen followers disrupted a speech by then-Sen. Barack Obama in Coral Gables, Florida. Symonette was photographed holding up a handmade sign that read “Blacks Against Obama,” above the web address MichaelWarns.com. Others displayed signs with references to Bible passages and messages including, “Obama for Gay Marriage, Against God,” “Obama for Abortion (Murder),” and “Obama Endorsed by KKK.”

Ahead of the 2012 Republican presidential primary in Florida, Symonette appeared under the stage name Michael Warns as the lead singer in a band opening a campaign rally for former Republican Sen. Rick Santorum in Coral Springs. “Remember Frederick Douglass, Harriet Tubman, and all of them were all Republicans,” Symonette sang. “The Democrats, they’re the worst thing that ever happened to the Black man.”

Despite numerous press reports on his past ties to the cult and his current delusional beliefs, Symonette has been a constant fixture at Trump campaign events since the final days of the 2016 campaign, when the then-candidate praised his “Blacks for Trump” sign at a rally in Sanford, Florida. Two weeks later, Symonette was invited to Trump’s election night victory party at the New York Hilton.

Since then, Symonette has attended rally after rally, seemingly always standing in prime position to get on camera.

In August 2017, Symonette was seen nodding in agreement with Trump at a rally in Phoenix when the president defended his comment that there “were very fine people, on both sides” at the extremist Unite the Right gathering in Charlottesville, Virginia, that month. Before the 2018 midterms, he stood behind Trump at a rally in Cleveland and mimed vomiting when Trump mentioned Waters, the California representative. When the president launched his reelection campaign in Orlando in 2019, Symonette was again on camera, gesturing in agreement when Trump said, “Our radical Democrat opponents are driven by hatred, prejudice, and rage. They want to destroy you and they want to destroy our country as we know it. Not acceptable, it’s not going to happen.”

While Symonette was photographed wearing a Trump campaign VIP pass outside one event, he has denied that Trump’s aides place him in prominent positions so that he can appear on camera behind the president. Still, it is obvious that the Trump campaign has made no effort to keep him out of the frame, despite copious evidence on his website and social media accounts that he remains devoted to the memory and teachings of the murderous cult leader Yahweh ben Yahweh.

In a rambling Facebook post last year, Symonette called on Trump to pardon Yahweh ben Yahweh and promised that, if he did, all of the cult leader’s remaining followers, who call themselves Yahwehs, would vote for Trump to remain president for 12 more years. According to Symonette, the cult leader had predicted Trump’s rise to him in 1984, when Yahweh ben Yahweh compared the real estate developer to the Persian king Cyrus.

“PARDON Yahweh Ben Yahweh,” Symonette wrote in a fractured English that seemed to mirror his fragmented thought patten. “We will Gather the millions Black Yahweh’s of who I’ll get to advocate for Republicans like Yahweh taught us the ultimate Revolt! & Now Black, Latin & White will Unite & Win For Trump! 2020, 2024, 2028 & forever!”