Here’s a trick question about the controversy over Hunter Biden’s laptop: Who’s most to blame for giving this pseudo-scandal more attention than it deserves? The New York Post for publishing the first sketchy article, or Fox News for elevating it in broadcast after broadcast?

The answer is neither. The guiltiest party is the Murdoch family, which owns both outlets. Fox and the Post are key parts of a media empire assembled over the decades by 89-year-old Rupert Murdoch, who now shares ownership with his six children, one of whom is chief executive of the family’s main company, Fox Corporation. While the Post doesn’t register much with readers outside New York, Fox is of course a national brand with a gusher of profits that has helped turn each of the Murdochs into multibillionaires. Given that Fox is a “central node” of the far-right conspiracy machine, it’s fair to regard the Murdochs as America’s first family of disinformation. Rupert Murdoch, co-chair of Fox Corporation, speaks to members of the media outside One Aldwych Hotel in London, on July 15, 2011.

The Murdochs, however, attract far less attention than their hired hands, the journalists and shouting heads who have downplayed Covid-19 and created the delusional content that helped catapult Donald Trump to the White House. The New York Times, in the approximately dozen stories it has published that touch on the Biden laptop controversy, referenced the Murdochs in just two of them, in passing. At the Washington Post, only three articles about the laptop mention the Murdochs — again, in passing.

There’s no shortage of reporting about the wretched content created by the Murdoch machine, but remarkably little reporting about the fact that the Murdochs are behind it. As MSNBC anchor Chris Hayes noted on Twitter after the first laptop story came out, “If you’re just choosing from people in OECD countries, ostensible liberal democracies, Rupert Murdoch has to be up there as the most-single-handedly destructive person of the last three decades, right?” But Hayes can be part of the problem. While he often criticizes Fox, and on rare occasions discusses the Murdochs, most of the time he fails to mention the family that could literally flip a switch and shut off the poison. On April 20, Hayes broadcast an eight-minute segment about Fox encouraging protests against stay-at-home orders, and a week later he devoted seven minutes to detailing the ways in which Fox downplayed Covid-19 — but while he named hosts and guests who spread the worst disinformation, “Murdoch” never passed his lips.

On the occasions when it bothers to focus on the Murdochs, the media often does the opposite of what it should. It coddles them. The latest exhibit comes this month in the form of a friendly profile in the New York Times of Rupert’s youngest son James, who loyally served for years as a senior executive and board member of the family’s global businesses (their holdings include major media outlets in Britain, Australia, and Asia, and in the U.S. include the Wall Street Journal). James, who lost out to his elder brother Lachlan in a succession battle, quietly left his remaining board seat this year and voiced some gentle regrets about the Frankenstein created by his family. “My resignation is due to disagreements over certain editorial content published by the Company’s news outlets and certain other strategic decisions,” he wrote in his brief letter of resignation. The newspaper of record thus treated him as a hero — its story, written by Maureen Dowd, was headlined, “James Murdoch, Rebellious Scion.” And in 2018, Lachlan Murdoch was a featured guest at a Times business conference where he was  served uniformly friendly questions by columnist Andrew Ross Sorkin, whose softballs included, “Do you watch ‘Succession’?” 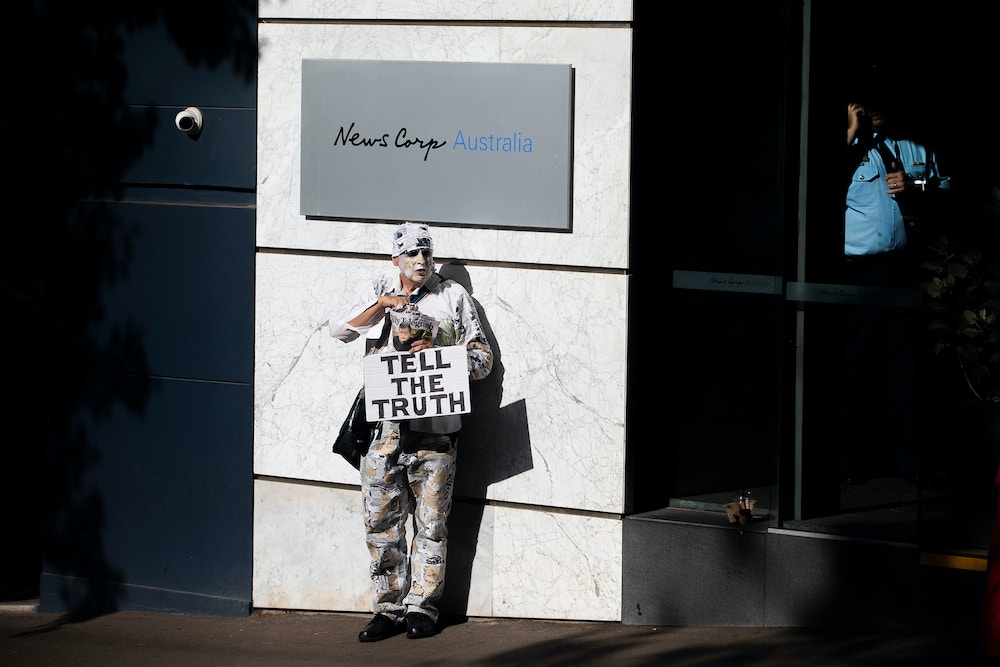 A protester is seen at the offices of News Corp Australia in Surry Hills in Sydney on Jan. 31, 2020.

This isn’t just a matter of journalistic oversight or malpractice. It’s a missed opportunity.

If the family’s last name became as toxic as the Fox name is, would they bring themselves to make changes, such as enforcing a zero-tolerance policy for racist and hateful content at their news outlets? The answer is probably no; Rupert Murdoch, an obdurate conservative, is famously unmoved by criticism and seems to enjoy being despised in Australia and Britain, where the media outlets that he doesn’t control are unsparing toward him.

But we won’t know for sure until we hear “Murdoch” as often as we hear “Fox.” There would, at the very least, be a greater awareness among Americans that the controlling authority at Fox News is not a newsroom of journalists, but a family of billionaires. Murdoch’s six children might not share his delight in being reviled and held accountable for what the family has wrought in America.

Murdoch’s children from three marriages include Prudence, the oldest, who has never played a role in the family businesses; Elisabeth, who briefly worked for her father but fell away when it reportedly became clear he had no interest in appointing a female successor; Lachlan, the oldest son who shares his father’s reactionary politics and is the chosen one; James, a centrist who was moved to gently comment on the problems at Fox only after he lost the succession race; and two teenage daughters, Chloe and Grace. According to the available descriptions of a secretive Murdoch trust registered in Nevada that’s unavailable for public inspection, the four eldest children control half the board seats of an LLC that oversees the family’s assets, with Rupert controlling the other half. (His teenage girls do not control any seats although they have ownership shares that are equal in value to their siblings’.)

Movements of racism and hate are not propelled by visual histrionics alone. They require platforms and they require capital.

There is no indication that Murdoch’s children, apart from Lachlan, actually hold his right-wing views. Many of them provide financial support to cultural or philanthropic organizations that are liberal in nature. James and his wife have even donated to Joe Biden’s presidential campaign. Yet there is not a puff of evidence that any of these offspring have taken serious steps to change the racist and hateful content that is produced by their media properties. The Murdoch children have received their billions in dividends and payouts without protest or consequence.

Sadly, the media’s habit of coddling the Murdochs (not always, but most of the time) tends to get noticed and called out only by a small circle of journalism watchers. New York University journalism professor Jay Rosen, a prominent media analyst, recently blistered the Times for its fluffy profile of James Murdoch. “The only thing I want to read about the Murdoch family concerns their anguish, repentance, or indictment,” Rosen wrote on Twitter. “[James Murdoch] was on the board of the company that owns Fox News. Complicity doesn’t get more formally realized than that.”

When Margaret Sullivan, usually an all-seeing critic at the Washington Post, managed in March to write an article about the peril of Fox News without once mentioning the Murdochs, the Columbia University journalism professor Bill Grueskin gently noted on Twitter, “’Rupert Murdoch could save lives by forcing Fox News to tell the truth about coronavirus’ is the headline for this timely @sulliview column.” The actual headline of the Murdoch-free column was “It’s time — high time — to take Fox News’s destructive role in America seriously.”

The final question is simple: Why does this hole in coverage of the Murdochs exist?

Journalists, like everyone else, are attracted to shiny objects. It’s so easy and satisfying to heap scorn on the crude TV shouters and not look beyond them. Sean Hannity and Tucker Carlson, who are so obviously absurd and dangerous, are inviting and willing targets. It is certainly right to expose their lies — we should not have less of that from any news organization. But movements of racism and hate are not propelled by visual histrionics alone. They require platforms and they require capital, which means they require wealthy people who are able and willing to underwrite the machinery of information warfare.

The Murdochs are not dumb. The younger ones are generally wise enough to stay in the background and give all appearances of being reasonable citizens. When they face complaints about their insane employees, they will downplay the harm or suggest they are a bit fed up too, but it would be inappropriate or fraught to meddle. They will donate money to worthy and liberal causes. They will present themselves as responsible men and women with whom we’re just having a civil disagreement, rather than prime enablers of fascism.