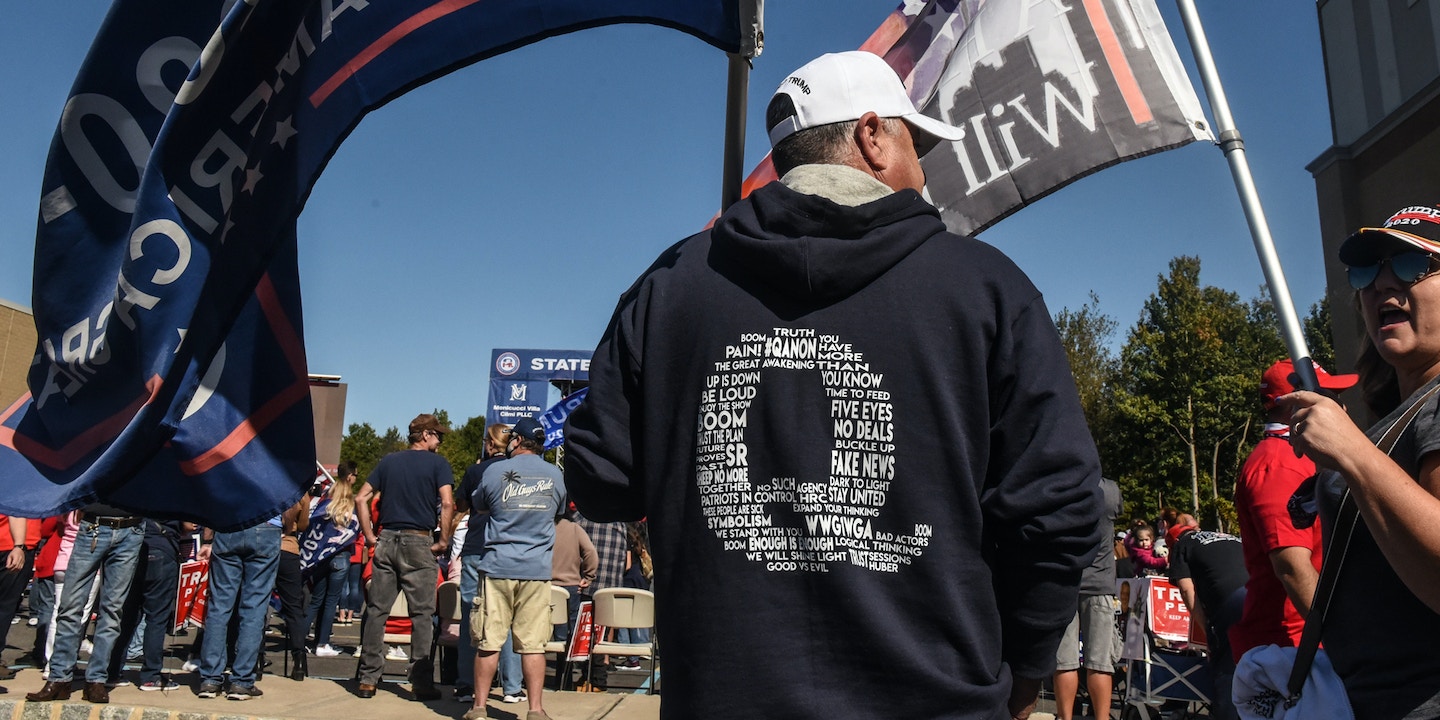 The Republican Party has engaged in a delicate dance with the sprawling movement known as QAnon, exploiting the energy behind it where possible, while working to keep a safe public distance elsewhere. As Election Day draws nearer, however, Republicans are dropping some of their reticence. In Georgia, the official arm of House Republicans is backing the QAnon-linked Marjorie Taylor Greene, a congressional candidate whose endorsement was coveted by the leading Republican Senate candidates in the state.

In one race in Florida, however, the conspiracy-minded movement could blow up an incumbent Republican’s reelection campaign and in the process tilt control of the state congressional delegation to Democrats.

Because the Q movement is thoroughly disconnected from reality, it’s impossible to say with any seriousness what its fundamental philosophical or politics tenets are, as adherents to the cause range from people vaguely concerned about child sex trafficking to those convinced that Democrats and their “deep state” allies have built a secret elite society that engages in pedophilia and cannibalism. The connective tissue is the defense of children being preyed upon by the powerful, and that’s how Republican Rep. Brian Mast stepped into the movement’s crosshairs.

In August, the South Florida Sun Sentinel resurfaced old Facebook posts of Mast’s in which the veteran bantered with Florida man Rocco LeDonni, a friend-turned-campaign manager, about sex with 15 year olds.

In 2009, LeDonni was vacationing in South Africa and posted an image of a bar. “i’m so proud of you,” Mast commented. “i hope you hook up with at least fifteen 15 year olds over there…. its legal there right.”

Two years later, LeDonni queried his Facebook friends. “Anyone have any good pick up lines for this weekend considering according to the crazy christian radio guy the world may end on sunday?”

Mast had one at the ready: “How about don’t turn this rape into a murder.”

Mast apologized for the remarks this summer, saying he was ashamed of them and was striving to be a better man. In the heat of a typical congressional race, the one-day story may have moved on from there.

Mast has the apparent upper hand in the 18th Congressional District, which covers parts of West Palm Beach as well as Martin and St. Lucie counties. The Cook Political Report lists it as R+5, meaning it has a substantial Republican advantage.

But unfortunately for Mast, an independent candidate on the ballot, K.W. Miller, is publicly associated with QAnon, and Mast’s remarks could hardly have been better tuned to send the movement’s supporters fleeing from him and toward Miller. In fact, Miller was the first to call for him to resign from Congress in the wake of the news of the comments, noted Sabra Ingeman, a spokesperson for Miller’s campaign. “As soon as the Sun Sentinel article came out, that night K.W. put up a video calling for his resignation, and then a bunch of other groups piled on to that,” Ingeman said, adding that particularly among women, some of whom have protested his office, the comment has deeply resonated in a negative way.

She added that despite whatever he has said on social media, Miller is not in fact a supporter or believer of QAnon. “We don’t know much about the QAnon groups. Like you said they’re very broad-based, and there’s a lot of individuals who are individually working in QAnon and all. That’s not something we’re a part of,” she said. “K.W. is not part of the QAnon or anything like that. They probably do have similar views in certain areas to what our views are, and other conservatives, but he’s not involved with any of that.”

Mast’s Democratic opponent, veteran Pam Keith, has also hammered Mast on the comments, running a 30-second ad that displays his Facebook posts next to an image of the late Jeffrey Epstein, the infamous former Palm Beach resident at the center of a global child sex-trafficking ring. “No. Those aren’t the words of this convicted sexual predator,” the ad intones. “They’re the words of disgraced Congressman Brian Mast. Disgusting. Dishonorable.”

Miller, the Q candidate, was momentarily in the national spotlight in July after his viral suggestion that the musician Beyonce is not in fact Black. “Her real name is Ann Marie Lastrassi. She is Italian. This is all part of the Soros Deep State agenda for the Black Lives Matter movement,” Miller posted on Twitter. “BEYONCÉ YOU ARE ON NOTICE!”

His thread went on to decode Beyonce’s Formation music video, unearthing clues that unlocked vast conspiracies. As has become the practice of the media, we should note here that Miller offered no evidence to support his assertions. That wouldn’t be entirely true, however: He offered evidence, just none that made any sense.

Yet there is plenty of evidence that Mast did tell the rape joke, and did joke about sex with 15-year-olds. Any local voter looking to express their opposition to such comments, who doesn’t want to vote for a Democrat, has Miller on the ballot.

“The Dark Money Deep State doesn’t want money to be donated to my campaign. They do not want me in office,” Miller tweeted in July, adding Q-related hashtags like #QANON and #THEGREATAWAKENING. “They know that I will not hesitate to expose the entire Deep State. We will WIN anyway!!”

Ingeman said that she wasn’t sure what Miller meant by including the Q-related hashtags on his posts, and that they don’t necessarily mean an endorsement of the movement. “If you’re talking about alcoholism, you might put Mothers Against Drunk Driving [as a hashtag] but that doesn’t mean you’re part of it. It might just be because it relates to something they can relate to,” she explained.

Miller’s Twitter account is no longer active — Ingeman said he closed it — but he remains at work on Facebook, a primary source of political news and information in Florida. His videos routinely receive several thousand views or more, suggesting that his polling number, which fluctuates from 2-4 percent in public and internal polls, is real.

The bulk of the Miller campaign’s ire is directed not at Keith, who he dismisses as too far left, but at Mast, who he accuses of having sold out constitutional conservative government.

It wouldn’t be a Florida congressional race if Keith wasn’t also getting hit for controversial remarks online. A Mast ad attacks Keith for her quip that Joe Biden “still has lots of rape to do to catch up to Trump.”

Polls have Biden and Trump neck and neck in the district, though Hillary Clinton lost it in 2016 to Trump by 9 percentage points. On Saturday, Trump kicked off Florida’s statewide in-person early voting by voting in West Palm Beach (though some counties had started early voting earlier). A poll in mid-September found Mast up 8 points over Keith. A recent internal poll released by Keith posited a 2-point lead for the Democrat, with Miller drawing 4 percent.

Keith ran in 2018 with the support of Brand New Congress and Justice Democrats, losing in the Democratic primary. She also ran for Senate in 2016, losing in the primary to Patrick Murphy, who previously represented the district.

Keith does not have the backing of Justice Democrats this cycle, which narrowed the number of candidates it endorsed, nor has she been listed on the Democratic Congressional Campaign Committee’s coveted red-to-blue list.

Currently, there are 13 Republican and 12 Democratic representatives from Florida. If Miller siphons off enough votes to help Keith win the seat, Democrats would take control of the state congressional delegation. It doesn’t typically matter which party controls a state congressional delegation, except in the instance of an Electoral College tie. In such a scenario, the House of Representatives chooses the winner, but not by individual vote. Instead, each state gets one vote. The new House sworn in in January, not the current one, would be the chamber to weigh in.

Ingeman, though, said the Miller campaign is far from playing spoiler and that she is convinced he’ll come out ahead on Election Day, based on energy on the ground and conversations with people leaving early voting locations. “Our exit polls are showing that we’re actually ahead of Mast,” she said. “People know that Mast voted against the Second Amendment and that he hasn’t accomplished anything over the past four years. The voters that are informed know that, so they’re glad they have an alternative here.”

Update: Oct. 29, 2020
This article originally referred to Marjorie Greene as a “QAnon believer.” Greene says her thinking on Q has evolved. “There was a time there for a while that I had read about Q, posted about it, talked about it, which is some of these videos you’ve seen come out. But once I started finding misinformation, I decided that I would choose another path.”