In June at the State Capitol, an event to turn in signatures to back Measure 110, which would eliminate criminal penalties for personal-use amounts of some drugs in Salem, Oregon.

Photo: Courtesy of Yes on Measure 110

Thanks to voters, Oregon will be the first state in the country to decriminalize the personal possession of all drugs, including heroin and cocaine. Oregonians passed Ballot Measure 110, also known as the Drug Decriminalization and Addiction Treatment Initiative, with 59 percent of the vote; it’s the most far-reaching of numerous successful drug-related measures on ballots nationwide, including the legalization of recreational marijuana in New Jersey, Arizona, Montana, and South Dakota. Every one of these victories constitutes a long overdue challenge to the racist, carceral logic of drug criminalization. Oregonians have taken a historic step in recognizing that if a carceral approach to drug use is harmful, it is harmful regardless of the drug in question.

In a general election between two candidates proudly committed to “law and order” politics and aggressive policing — regardless of Joe Biden’s minimal gestures towards marijuana reform — Oregon’s ballot decision offered a glimmer of hope for those interested in significant criminal justice changes. The success of Measure 110, alongside other decriminalization and legalization efforts, is a rebuke to the notion that any person who uses illegalized drugs, no matter what the substance, is best served by an interaction with the police and prison system.

In an election between two candidates committed to “law and order” and policing, Oregon’s ballot decision offered a glimmer of hope for significant criminal justice changes.

“This is part of how we reform policing: by getting them out of the drug business,” wrote Brooklyn College sociology professor Alex Vitale, author of “The End of Policing,” on Twitter. Vitale was referring to the four states that voted to legalize recreational marijuana, but he added that “Measure 110 in Oregon is even better.”

Oregon’s decriminalization measure should not be confused with the legalization of all drugs; it instead entails the removal of criminal penalties for the possession of small amounts of illegal substances. After February 1, the penalty for drug possession will be akin to a hefty traffic ticket: a $100 fine. Those who cannot or do not want to pay can choose to agree to a “health assessment” at an addiction recovery center. The ballot measure also includes the expansion of access to recovery treatments, housing, and harm reduction services, to be funded through the reallocation of tens of millions of dollars from Oregon’s cannabis tax. Money saved by not arresting, prosecuting, and caging people found with drugs will also be redirected to a fund for treatment services.

Measure 110 would reduce convictions for drug possession by nearly 90 percent: from 4,057 convictions in 2019 to an estimated 378 in the coming year, according to the Oregon Criminal Justice Commission. The same report found that racial disparities in drug arrests could drop by 95 percent, and that convictions of Black and Indigenous Oregonians could drop by a staggering 94 percent. These figures alone show the unerringly racist bent of drug arrests and convictions — just further proof of an insupportable system. 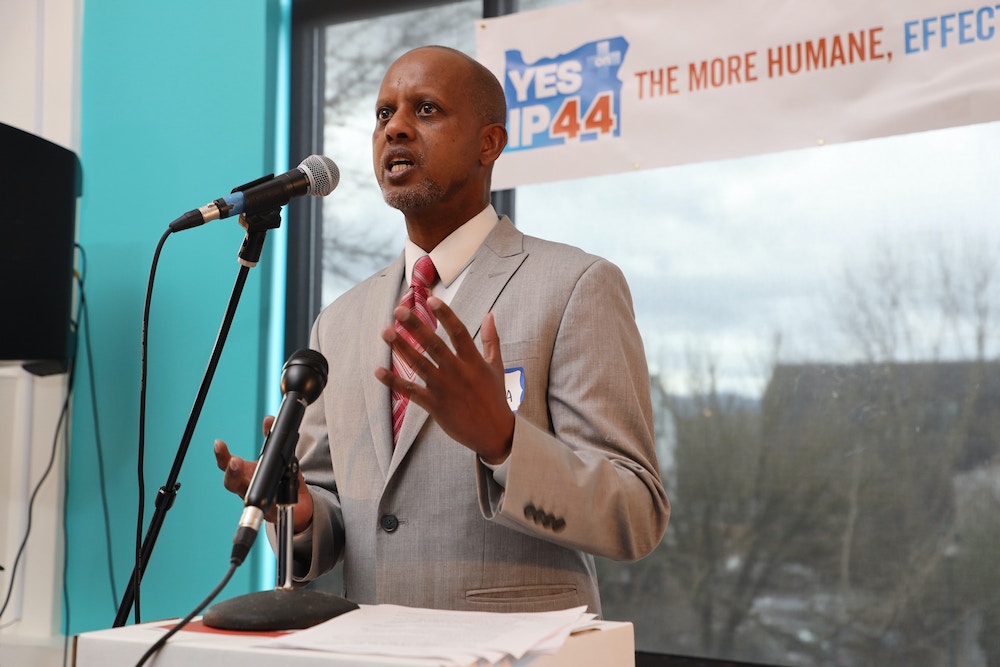 Writing for The Appeal last month, Zachary Siegel argued that Oregon’s approach “would mark a momentous shift in favor of a public health-focused approach to substance use, and a turn away from policies that incarcerate people or at least saddle them with a criminal conviction over behaviors tied to addiction.” The decriminalization campaign received strong endorsements from members of the state’s medical and health care communities, which have observed firsthand the failure of the brutal status quo to help victims of the country’s ongoing opioid epidemic. According to the Measure 110 campaign, one in 10 Oregonians reportedly struggle with substance use.

“We have seen what happens to families and patients in the wake of the opioid epidemic,” Marianne Parshley, the governor of the American College of Physicians Oregon chapter, told Oregon Public Broadcasting. Parshley said that the risk of deadly overdose is significantly increased when a person dealing with addiction is incarcerated: “The time of highest risk is in the two weeks post discharge from correctional institutions.”

“Measure 110 is arguably the biggest blow to the war on drugs to date,” said Kassandra Frederique, executive director of the Drug Policy Alliance, in a statement. The advocacy group spearheaded the Measure 110 campaign and drafted the Drug Policy Reform Act as model legislation, to be taken up in statehouses and ballot measures nationwide following its success in Oregon. Frederique added that “as we saw with the domino effect of marijuana legalization, we expect this victory to inspire other states to enact their own drug decriminalization policies that prioritize health over punishment.”

While a first step in the U.S., all-drug decriminalization is not an untested experiment. The Drug Policy Alliance, among other decriminalization and legalization advocates, point to Portugal, where all drugs have been decriminalized for the last two decades. Drug use rates in Portugal have remained lower than the average use rates in Europe, and far lower than those in the U.S. — even while Portugal has suffered through years of heightened economic crisis and extreme spikes in unemployment. Meanwhile, rates of HIV infection have fallen, from 1,575 cases in 2000 to 78 cases in 2013. Following decriminalization, arrest rates for drug-related offenses dropped by 60 percent, while the number of people enrolled in drug treatment programs increased by 60 percent in turn. The number of annual drug overdose deaths has plummeted.

It should come as no surprise that this progressive victory was secured directly by the voting public, rather than political leaders presuming to act on our behalf.

“Usually the focus is on the decriminalization itself, but it worked because there were other services, and the coverage increased for needle replacement, detox, therapeutic communities, and employment options for people who use drugs,” Ricardo Fuertes, a Lisbon-based project coordinator with an outreach organization founded by people living with HIV, told Vice News in 2016. “It was the combination of the law and these services that made it a success. It’s very difficult to find people in Portugal who disagree with this model.”

The fact that so few other nations have followed Portugal’s successful lead in passing all-drug decriminalization speaks to the entrenchment of the war on drugs, and the historic support for and normalization of policies that criminalize poor people of color. Yet in Oregon and beyond this election, U.S. voters have made clear that, in great numbers, people reject carceral responses to drug use. Like so many issues relating to public welfare and human dignity, it should come as no surprise that this progressive victory was secured directly by the voting public, rather than political leaders presuming to act on our behalf.