U.S. foreign policy on the Israeli-Palestinian conflict is unlikely to ever be the same. What comes next is an open question. Imagine a soccer match in which the goalie for one side, with a wink and a nod, decides to run off for coffee in the middle of the game. That was basically President Donald Trump’s approach to the Israeli-Palestinian conflict over the past four years. The Trump administration gave Israeli Prime Minister Benjamin Netanyahu an open-goal opportunity to run up the score on the Palestinians, with no resistance and lots of connivance from the United States.

With President-elect Joe Biden trudging onto the field, it’s likely the U.S. foreign policy establishment will seek a return to the Obama-era modus operandi: an emphasis on two states and maintaining the illusion of being an honest broker, even if in practice Israel is favored. There could be a few wrinkles, owing to Obama administration veterans’ frustrations about Israel’s actions around two failed Palestinian peace pushes, as well as the Iran nuclear deal. But Biden has historically been and will likely continue to be a traditional, Washington pro-Israel stalwart.

“Trump made clear once and for all that the U.S. is entirely pro-Israel. He removed the mask of the honest broker.”

It’s also possible that none of it will matter. The playing field of the Israeli-Palestinian conflict will be radically different than what Obama veterans left behind in 2017 — not least thanks to Trump leaving an open goal for the Israelis. The end result seems clear: yet another hefty nail in the coffin of the two-state solution, a result of radically altered facts on the ground green-lit by Trump — and unlikely to be reversed by Biden or any other U.S. president.

Over the past four years, Trump and his deputy-cum-son-in-law Jared Kushner helped Israel realize an incredible set of diplomatic and strategic gains at virtually no cost in concessions to the Palestinians. On a raft of policy areas, Trump suddenly dropped objections long held by bipartisan U.S. presidential administrations over decades. Establishing a U.S. Embassy in Jerusalem, annexing the disputed Golan Heights, ramping up illegal settlements, strangling humanitarian aid to the Palestinians, demolishing record numbers of West Bank homes, threatening to brand human rights organizations critical of Israel as anti-Semitic, and even scoring public recognition for Israel from several Arab states — these are just a few of the mind-blowing changes that took place under Trump. More remarkable still, these gifts were all handed to Israel by the author of “The Art of the Deal” without negotiating anything in return.

In what appears to be a final gratuitous gift to the Netanyahu government, Trump’s Secretary of State Mike Pompeo reportedly plans to visit the annexed Golan Heights and a settlement in the occupied West Bank next week. These moves, unprecedented for a sitting secretary of state, would further legitimate Israeli claims to these territories while emphasizing how little the U.S. is interested in Palestinian statehood or other basic interests. For some Palestinians and their advocates, the Trump approach reflected an unspoken reality suddenly blasted out over loudspeakers.

“Trump made clear once and for all that the U.S. is entirely pro-Israel. He removed the mask of the honest broker and made clear that the role of the U.S. in any negotiation is to act as Israel’s lawyer,” said Diana Buttu, a political analyst based in Ramallah and former legal adviser to the Palestinian team during the Oslo peace process. “His legacy has been to check off everything on Israel’s wish list.” Senior White House adviser Jared Kushner delivers a speech during the opening of the U.S. Embassy in Jerusalem on May 14, 2018.

By most accounts, Kushner played a key role in driving his father’s Israel policy. Jokes abounded when the real estate developer was handed the portfolio for Middle East peace. But his tenure may indeed have been consequential for taking the Israelis and Palestinians further away from any deal.

The signs of Kushner’s openly one-sided approach were visible soon after Trump took office. Early in his term, an amusing anecdote emerged about Kushner’s long personal history with the right-wing Netanyahu. In the late 1990s, Kushner’s family hosted Netanyahu overnight at their New Jersey home during one of his trips to the United States — a night during which the teenaged Jared was made to vacate his room for Netanyahu and move himself into the basement.

This personal experience of displacement at the hands of an Israel government official did not seem to have given Kushner much empathy for the Palestinians once in power. During his role as Trump’s envoy, Kushner marshaled the full weight of U.S. diplomatic power to try and bury the Palestinian national movement. While bragging about his own in-depth reading on the Israel-Palestine conflict, Kushner has publicly cast aspersions on the presumed right of Palestinian self-governance and done his utmost to stifle their ambitions.

It’d be too easy to say that this effort has been unsuccessful. With the facts on the ground under the Trump administration radically reshaped in Israel’s favor — through actions like the embassy move and annexation of the Golan Heights — far less has been left on the table to even negotiate about. Even the veto that the Palestinians once held over Arab states normalizing relations with Israel has been annulled, with numerous nations, including the United Arab Emirates, Bahrain, and Sudan, already establishing public ties with Israel. These moves have effectively destroyed what remained of the old Arab League consensus on this subject, which said that ties with Israel should be predicated on the creation of a Palestinian state. With such a state now effectively out of the picture and the Arab League moving on regardless, the Palestinians have been left alone to an uncertain fate. 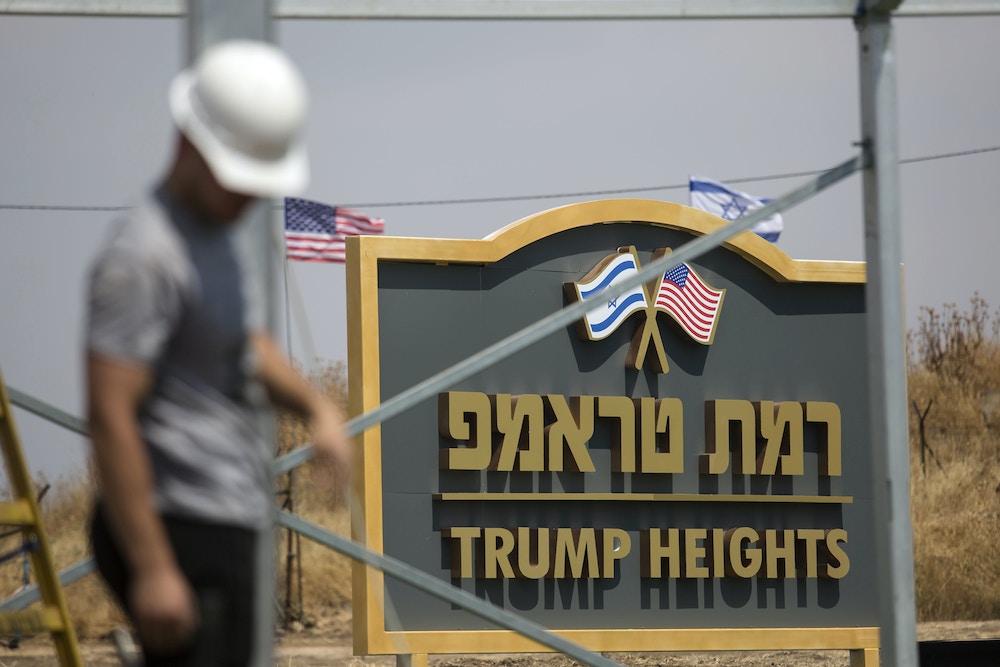 An Israeli man works near a sign for a new settlement named after U.S. President Donald Trump in the Golan Heights, which is occupied by Israel, on June 17, 2019.

The odds that a Biden administration will go equally hard in the opposite direction to bring the Palestinians back to negotiating parity with Israel seems unlikely to most analysts. The new balance of power that Kushner, Netanyahu, and a few other well-placed individuals have established is unlikely to be radically changing anytime soon.

“There are certain bells that the Trump administration has rung on this issue that Biden will not, and cannot, unring. Things such as recognizing Jerusalem as Israel’s capital, annexing the Golan Heights, supporting normalization — the Biden administration will accept these as the new normal,” said Yousef Munayyer, non-resident Senior fellow at the Arab Center Washington DC. “The U.S. is in an economic recession and dealing with a pandemic virus. Meanwhile, on the international stage, there are a host of other pressing issues created by the Trump administration that are crying out for attention. Those things are going to be at the top of the agenda for the Biden administration.”

“There are certain bells that the Trump administration has rung on this issue that Biden will not, and cannot, unring.”

Under the Trump administration, U.S. relations and economic support for the Palestinian Authority were choked off, as part of a hardball campaign aimed at compelling their surrender to Israeli terms. While Biden is unlikely to put pressure on Israel to make concessions, he will likely seek a return to the status quo ante with Palestinian leaders that previously existed under the Obama administration.

The Palestinian leadership, meanwhile, has its own problems: weak, divided, and rudderless, led by a septuagenarian ruling class that was caught almost entirely flat-footed by the Trump administration’s merciless campaign to destroy Palestinian nationalism. A return to the Obama-era status quo, with Biden doing some halfhearted goaltending against the most blatant Israeli abuses, will not save them. But it could give them the breathing space to begin to rethink their approach to a conflict that has left them at the mercy of shifting American political winds.

“There has been a serious internal legitimacy crisis that the Palestinian Authority leadership has faced for more than a decade,” said Khaled Elgindy, a senior fellow at the Middle East Institute and author of the book, “Blind Spot: America and the Palestinians, from Balfour to Trump.” “Biden is not going to institute earth-shattering changes on the ground, but by resuming aid funding, reestablishing political relations, and ceasing the constant assault that we’ve seen under the Trump administration, he might at least give Palestinians the breathing space they need to put their own house in order.”