Tyson, facing lawsuits over its handling of the Covid-19 outbreak, tapped LULAC for a publicity push over its safety record. 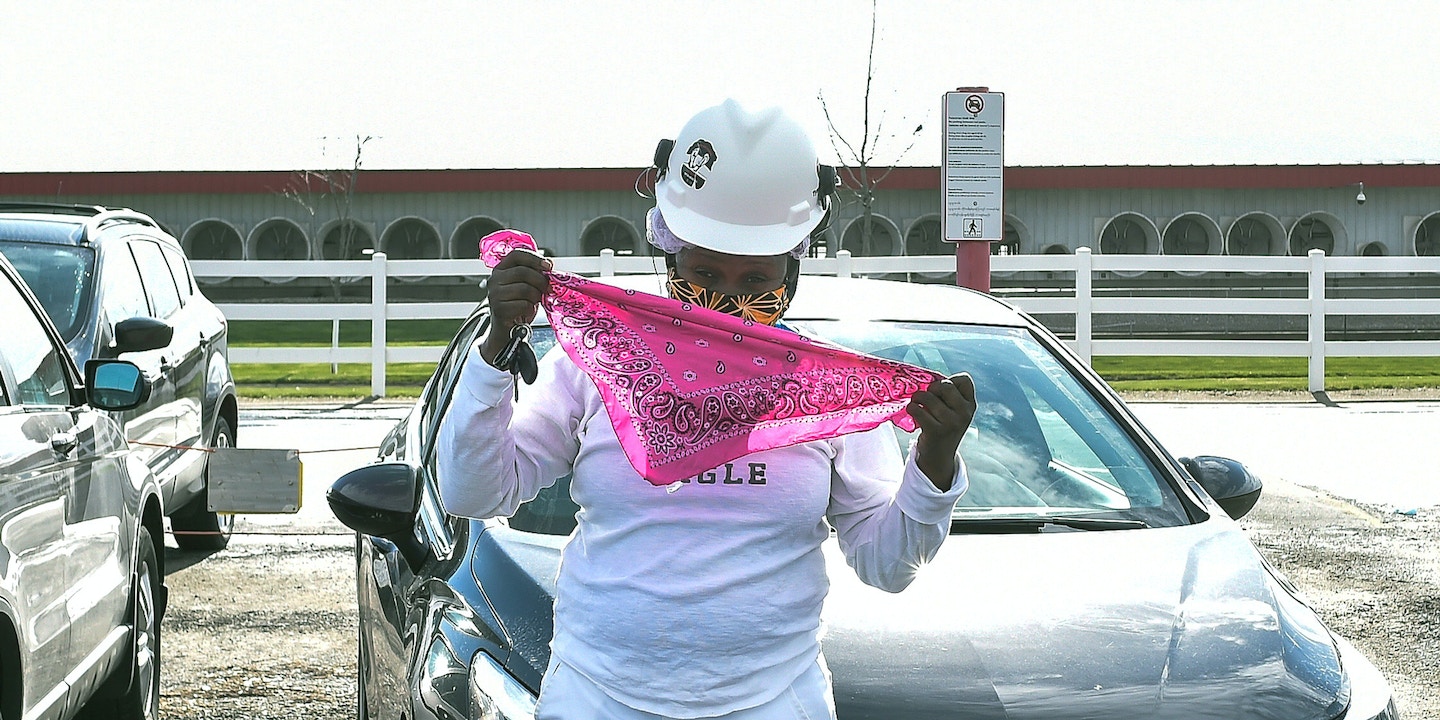 Over the summer, after months of negative headlines about widespread Covid-19 infections and deaths among its heavily immigrant workforce, the meat industry seemed to reach a turning point.

The League of United Latin American Citizens, a storied civil rights group for Latinos, paid a carefully choreographed visit to the headquarters of Tyson Foods, one of the largest meatpacking corporations. And from the outside, it looked like Tyson had responded to concerns that the company had not done enough to protect its predominantly Black, Asian, and Latino workforce from infection.

LULAC put out a press release on July 17 saying that its officials, including National President Domingo Garcia, traveled to Springdale, Arkansas, met with Tyson Foods chief executive Noel White at company headquarters and tour a Tyson-owned poultry plant in the city known as the Berry Street facility. During the meeting, LULAC said, the group spoke with White about a “series of community demands,” including free testing for all workers, adequate protective equipment, line speed to labor adjustments, and assistance to families who have lost loved ones to the coronavirus.

Garcia posed with Tyson executives for a photo, and the group published it, along with other photos from the tour, in the press release. In the statement, LULAC praised the company for going beyond “the CDC and OSHA’s recommended procedures” and declared that the firm “is making significant changes and investments to improve worker safety and America’s food supply.”

This was a public relations coup. LULAC is the biggest and oldest Latino civil rights group in the country, and Tyson Foods facilities have seen some of the worst and most extensive outbreaks in the country. Over the first six months of the virus reaching the United States, at least 8,500 Tyson employees working at plants in seven states tested positive for Covid-19, with more than 25 dead — a fatality rate more than double other large slaughterhouse companies. Critics claim the firm moved slowly to provide safety equipment, coerced sick employees to continue showing up to work, and kept workers huddled elbow to elbow in conditions that fueled the spread of the virus.

The LULAC statement was featured prominently in a Tyson press release and in tweets outlining its commitment to worker safety. LULAC’s praise of the food-processing giant has also appeared in other media outlets about the company’s worker safety record, including a recent detailed investigation by The Guardian, which found few reforms and rampant infections at the Berry Street plant.

Tyson has also long served as a corporate sponsor of LULAC.

The families of workers who have fallen ill and died from the coronavirus have filed lawsuits against the company, with multiple cases in Iowa and Texas. Tyson has sought to dismiss the lawsuits on grounds that the company followed all necessary safety standards. One of the most egregious allegations is contained in the wrongful death lawsuit filed by the family of Isidro Fernandez, an employee of the Tyson plant in Waterloo, Iowa, who died of complications from Covid-19. The lawsuit, filed earlier this year, was amended last week to accuse Tyson managers of ordering employees to come into work while privately betting money on the number of workers who would become sick from the deadly virus. The plant manager “organized a cash-buy-in, winner-take-all, betting pool for supervisors and managers,” while other managers denied the existence of confirmed cases within the plant, according to the suit. Over a third of the facility’s workforce contracted the disease.

In July, a coalition of activist groups filed a racial discrimination complaint against Tyson for failing to adhere to safety guidelines resulting in the spread of the coronavirus among its meat-processing workers. The complaint alleged that Tyson moved swiftly to protect the health and safety of its largely white corporate office, while doing little to stop the spread of the virus among its immigrant and nonwhite front-line slaughterhouse workers. (Latino workers at meat-processing plants accounted for 56 percent of cases reported in meat production plants in 21 states, according to a report from the Centers for Disease Control and Prevention.) As news broke about the racial discrimination complaint, spokespeople for Tyson referred reporters to LULAC’s comments. Workers wait in line to enter the Tyson Foods pork-processing plant in Logansport, Ind., on May 7, 2020.

Tyson Foods’ ties to LULAC come at a time of crisis for the firm and its heavily immigrant workforce. Tyson has pushed hard to counter negative headlines regarding the pandemic and fend off an array of wrongful death lawsuits from the families of deceased workers. The company has taken out full-page advertisements in the New York Times and the Washington Post, as well as online advertisements featuring nonwhite workers touting Tyson’s commitment to health and safety.

Tyson has touted tens of millions of dollars in safety upgrades, bonuses for front-line workers, and new medical assistance for infected workers. The ads position the company as doing its part to both safeguard the nation’s food supply and uphold worker safety.

But the ads do not tell the entire story. Despite claims to have carefully safeguarded workers’ health, the recent wave of lawsuits and other documents paint a different picture. Far from prioritizing U.S. meat supply, investor reports show that as the pandemic hit, companies such as Tyson increased meat exports to foreign markets, including China.

Tyson Foods did not respond to a request for comment. Garcia, the head of LULAC, said that his organization is committed to improving conditions at meatpacking plants. “We were one of the first third parties allowed to inspect plants there in Springdale and talk to workers as well as the management regarding conditions at the plant,” he said in an interview with The Intercept.

Garcia explained that his group connected to Tyson through Nora Venegas, a Tyson lobbyist who serves on an advisory board for LULAC.

“All the meatpacking plants and the poultry plants were grossly unprepared for Covid,” said Garcia, who blamed the early outbreak not on any individual company, but on a “total lack of national leadership on this very dangerous condition.” The CDC, he noted, “was telling everybody not to wear a mask.”

He also acknowledged that Tyson provides $25,000 a year to LULAC, along with several truckloads of charitable food donations. “Our budget is over $1 million a year; nobody can buy our endorsement or support,” Garcia said.

But Garcia’s moves have disappointed some LULAC supporters, including one local LULAC leader who asked for anonymity in order to criticize the national leadership. “The donations have created blinders on this issue,” the LULAC leader said. “I think it’s difficult for LULAC to understand, someone has put some rose-colored glasses on them. You can see what’s going on with this tap dance. These plants are causing chaos for communities. It’s a death march for the workers.”

The timeline of events also undermines the narrative that Tyson followed CDC recommendations.

In Iowa, Pedro Cano Rodriguez, a 51-year-old worker at a pork plant in Columbus Junction, became symptomatic on April 2, was hospitalized for symptoms related to Covid-19 on April 10, and died four days later.

According to a lawsuit filed by his children, at the time when Rodriguez first developed symptoms, Tyson failed to provide personal protective equipment, dividers, or physical barriers between line workers, and did nothing to encourage employees to remain six feet apart.

Jose Angel Chavez, who worked at a Tyson plant in Texas for over 20 years, died on April 17 after contracting Covid-19 earlier that month. His family filed a lawsuit against the company in June, saying that Tyson failed to provide a safe working environment when the pandemic began. The lawsuit claimed that Tyson Foods didn’t take appropriate measures to prevent the spread of the virus at its facilities, failing to distance workers, provide PPE like face masks and gloves, and notify staff of infections or tell them to stay home when sick. In early August, Chavez’s family dropped the suit.

Early in the crisis, the government provided warnings and precautions for protecting worker safety. On March 9, the Occupational Safety and Health Administration issued guidance calling for all employers to establish flexible hours, maintain physical distance among employees, and use various PPE to guard against the spread of the virus.

As the crisis continued to grow, with outbreaks in slaughterhouses across the country, Tyson faced increasing demands by local health officials to shut down operations.

Despite its public announcements of radical investments in worker safety, Tyson has conceded that the company still has not implemented the CDC-recommended six-feet distancing recommendations. In response to an inquiry from Sens. Elizabeth Warren, D-Mass., and Cory Booker, D-N.J., regarding the meat industry’s response to the pandemic, Tyson stated in July that it was “creating barriers and/or requiring face shields on production lines where social distancing is not possible.”

Tyson has moved to dismiss the wrongful death lawsuits. Houston-based attorney Patrick O’Hara, who filed the lawsuit on the Chavez family’s behalf, noted that the family has a 16-year-old daughter and have lost their main breadwinner because of the company’s negligence.

Navina Khanna, executive director of the HEAL Food Alliance, one of the plaintiffs in the racial discrimination complaint against Tyson, expressed disappointment that Tyson has done so much to refurbish its public image rather than change its business model.

“Put your money there and then you don’t need to fight to make yourself look good. You look good by doing the right thing.”