The entertainment industry has been given extensive leeway during the pandemic, even as California now faces a stay-at-home order. 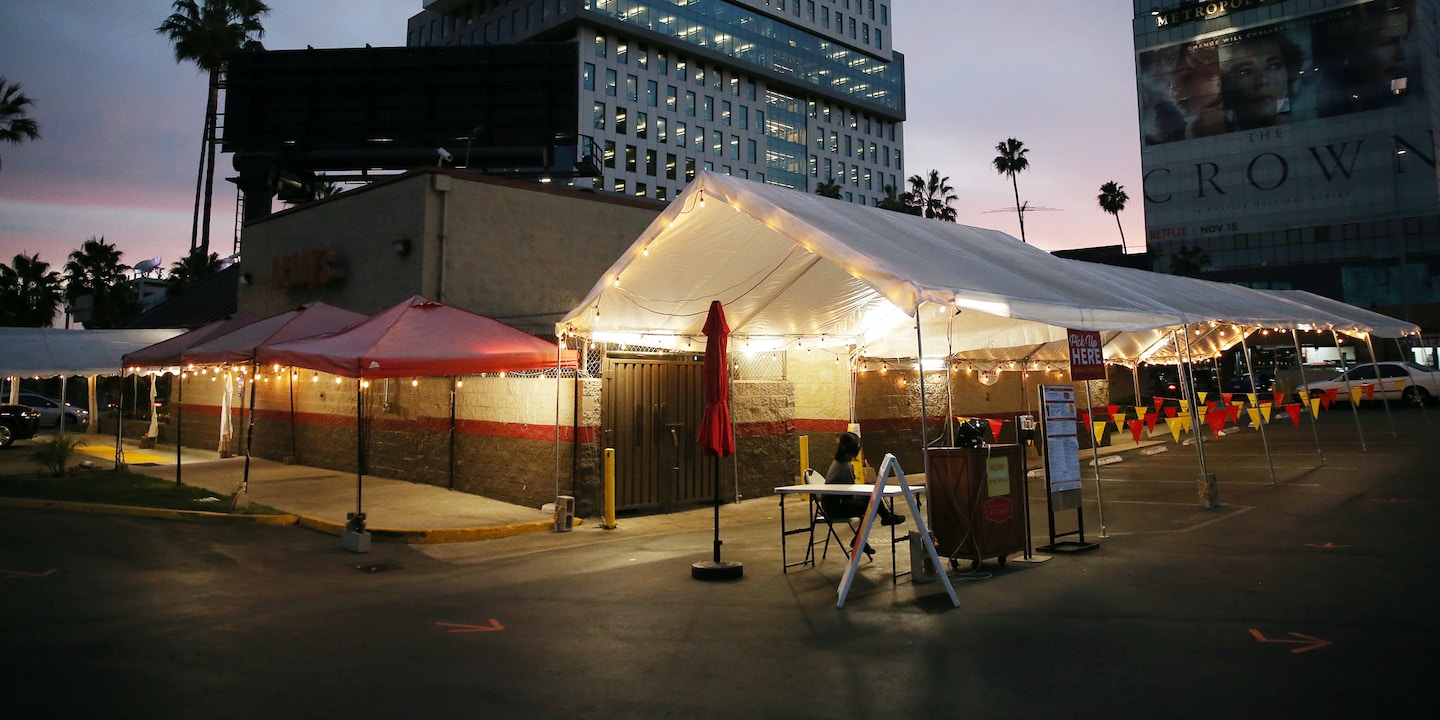 Last month, California Gov. Gavin Newsom was caught violating his own warnings against multiple households dining together indoors. The Democratic governor was spotted at the French Laundry, an exclusive restaurant north of San Francisco, where he was celebrating the birthday of longtime friend Jason Kinney.

The dinner controversy was more than just an opulent display of political double standards — it also highlighted the backroom efforts to maintain special treatment during the pandemic. Kinney, a veteran political operative, is a lobbyist for a number of interests seeking to shape the rules governing life under the pandemic, including what kind of economic activities are deemed essential in order to stay in business.

The inside track may have paid off. One of Kinney’s clients, Netflix, has been allowed to continue to operate during the latest round of forced closures that began last week as intensive care hospital capacity has dwindled across the state.

The entertainment industry has been given extensive leeway to operate during the pandemic, even as California now faces a stay-at-home order. The state has deemed the television and movie production industry as “critical infrastructure” and has allowed Hollywood studios to continue filming projects, including in Los Angeles, which is facing the most strict lockdown order.

Many studios are still filming shows across Los Angeles, including HBO’s “Curb Your Enthusiasm” and Netflix’s “The Kominsky Method,” along with at least 40 feature films that began filming in November. Sony Pictures told investors that it began to ramp up its production schedule back in July.

This stands in sharp contrast to the strict rules applied to the average California resident or small business. Californians in many counties now face fines or imprisonment for venturing outside for any “nonessential” travel, congregating in small groups, or operating an outdoor restaurant, even one that follows federal guidelines on social distancing and hygiene.

Kinney is just one of many entertainment industry lobbyists who has sought to influence the governor’s office over essential work and coronavirus response rules. Sony Pictures, Walt Disney and Co., Paramount Pictures, Warner Brothers Entertainment, and the Motion Picture Association, the trade group for major Hollywood studios, deployed lobbyists to influence California state officials during the pandemic, disclosures show.

Warner Brothers, for instance, spent $22,500 earlier this year on lobbyists contacting the governor’s office for “COVID/OUTREACH, TV/FILM PRODUCTION,” according to a disclosure. The Motion Picture Association spent $45,000 on lobbyists to shape the “COVID-19 Reopening of film/tv sector.” Paramount Pictures has spent at least $85,000 this year on the “essential business” rules developed by state agencies in California.

Netflix nearly tripled spending on lobbying in California as the pandemic hit the state. The streaming giant, according to filings, spent an average of about $24,437 a quarter on efforts to influence state policymakers in 2019. This year, during the pandemic, Netflix’s lobbying fees jumped to an average of $70,725 a quarter. The jump in spending includes increased fees to Axiom Advisors, the firm founded by Kinney.

The movie studios, Kinney, and the governor’s office did not respond to a request for comment. The Motion Picture Association referred The Intercept to a previous statement from the group noting that the industry has worked with union and guild partners “for reaching consensus on health and safety guidelines for motion picture, television and streaming productions in response to COVID-19.” 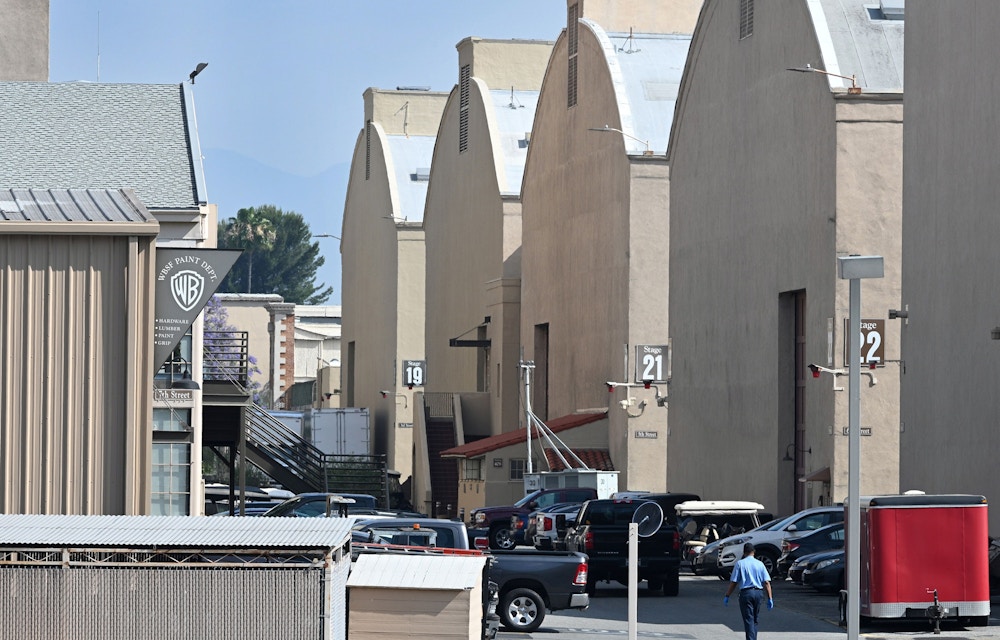 An employee walks by the filming stages at Warner Bros Studios in Burbank, Calif., on June 12, 2020.

An unusual series of exemptions has caused growing backlash to the entertainment industry.

Initially, the state of California did not include Hollywood studios in the list of essential workers issued in March. But a revised listing, issued in April, declared that workers involved in “the entertainment industries, studios, and other related establishments” to be essential “provided they follow covid-19 public health guidance around physical distancing.”

Then, in November, Newsom provided a special exemption to television and film production companies for his earlier limited shelter-in-place order issued before Thanksgiving, which featured a curfew from 10 p.m to 5 a.m. The workforce on film sets could continue operations throughout the night.

Some industry insiders feared that the latest round of shutdown orders in the face of surging coronavirus cases would revoke the designation. The orders issued by both Eric Garcetti, the mayor of Los Angeles, and Newsom in recent days, however, explicitly reiterate support for the entertainment industry to remain in business.

The anger over the exemption has continued to boil over. Earlier this month, a central coronavirus testing site at the Union Station building faced a temporary closure to accommodate the filming of a remake of “She’s all That” featuring TikTok star Addison Rae. Some 500 appointments were canceled. The negative news cycle resulted in an intervention from the mayor’s office to keep the testing site open.

Around the same time, an LA restaurant owner, Angela Marsden, posted a viral video highlighting the disparity. The video features Marsden displaying her own socially distanced outdoor dining, which has been shut down by the state, merely steps across a parking lot from similarly situated tents and chairs associated with the NBC Universal production set for the series “Good Girls,” which has been allowed to proceed as essential work.

“If [Newsom] can dine indoors with 22 of his closest friends,” Andrew Gruel, a chef who operates LA restaurants Slapfish and Big Parm, told reporters this week, “I can have my guests dine outdoors, in the beautiful air, absorbing the vitamin D, and enjoying a meal.”

Gruel, in comments to The Intercept, said the studio industry “exemptions underscore the fact our officials policy revolves around supporting their campaign donors at the expense of small business. It’s not about science or data.”

The Hollywood Reporter, the esteemed trade outlet, noted this week that entertainment executives have maintained guarded optimism over the fact that Newsom has maintained support for the entertainment industry in his latest order. “It bodes well for the industry that it made it through this round,” one state official told the outlet. “We are not a bar where everybody sits around with their masks off,” said Momita Sengupta, vice president of Netflix’s physical production operations.

Industry insiders, according to the Hollywood Reporter, have also hoped that the entertainment industry’s economic contribution to the state will protect it from further regulation.

Paramount Pictures’ lobbyist Greg Campbell previously served as chief of staff to former Assembly Speaker John Pérez. The disclosure for his firm shows that Campbell lobbied the administration on the essential worker memorandum from the governor’s economic affairs office earlier this year.

Campbell jointly serves clients through a partnership with a lobbyist named Jim DeBoo. That relationship may serve him well. On Wednesday, DeBoo was announced as Newsom’s new chief of staff to replace outgoing chief of staff Ann O’Leary.