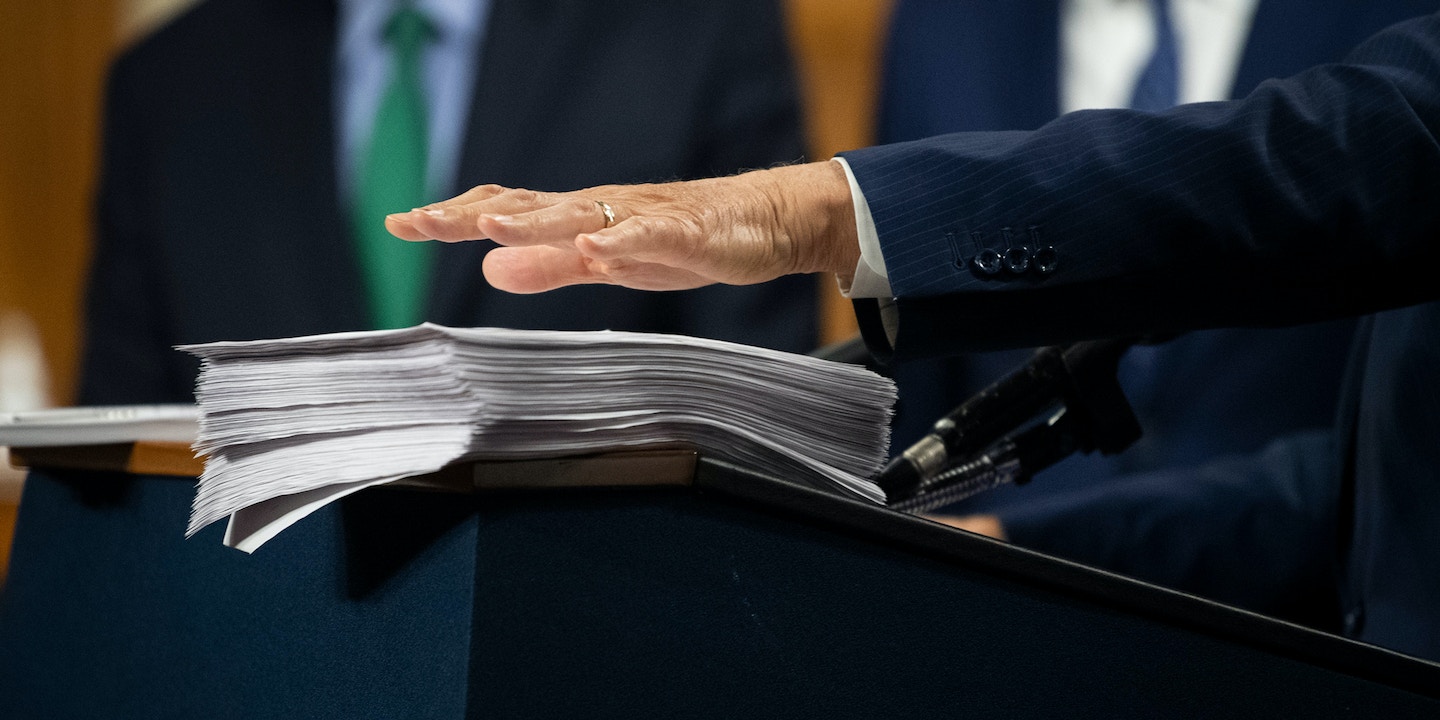 A draft of coronavirus relief legislation, circulated by a bipartisan group of lawmakers, eschews direct payments to average Americans but contains an unusually generous handout to the very wealthy.

The draft legislation, the Bipartisan Emergency COVID Relief Act of 2020, was released this week as part of a package of two major bills to confront the ongoing crisis.

The draft of the first bill circulating on Capitol Hill contains a number of adjustments to the Paycheck Protection Program, the forgivable loan program that has served as the centerpiece of the government’s efforts to curb job loss stemming from the pandemic. Many of the changes provide extended eligibility for expenses that can be reimbursed by the PPP program, including damage from looting and costs associated with cloud computing, as well as the construction of sneeze guards and other safety measures implemented by businesses.

But one of the revisions in the legislation is a subtle yet radical change that would result in a major windfall for the highest-income Americans and large corporations.

The bill provides that businesses claiming expenses reimbursed by PPP forgivable loans, which are already tax-free, can be further used as deductions when calculating taxable income. In other words, the change would allow a corporation that claimed $1 million in PPP reimbursements to apply that money as a deduction on its tax return, reducing taxable income by $1 million.

Critics of this idea, first circulated by a bipartisan set of legislators last summer, note that it provides an unprecedented tax advantage that overwhelmingly benefits investors and high-net-worth professionals. IRS rules have long prohibited tax-free government grants and reimbursements from being used as deductions.

Even Treasury Secretary Steve Mnuchin called out the proposal earlier this year as overly generous to business interests.

Steven Rosenthal, a tax expert with the Tax Policy Center, writing in his blog TaxVox, has noted that the proposal represents a “double dip” that abandons longstanding tax norms to provide “overly generous relief” that rewards “savvy, well-connected business and crowds out relief for others, undercutting the effectiveness of Congress’ aid.”

Rosenthal, in comments to The Intercept, estimates that the PPP deduction provision could reduce the taxes of the highest-income taxpayers by at least $100 billion without benefitting workers or those who are unemployed.

The tax deduction provision technically applies to all PPP recipients, though it is unlikely that those most in need will receive the extra benefits. Wealthy business owners and large corporations claim the lion’s share of business expense deductions. Rosenthal noted that the Joint Committee on Taxation found that over half of all pass-through business deductions, a class of Americans that includes wealthy doctors and financial consultants, flow to individuals with over $1 million in income. The top 1 percent of Americans by wealth own over half of all corporate stock.

The latest Covid relief bill, Rosenthal said, is a “travesty”; “Congress is showering billions on millionaires using the cover of ‘small’ business.”

Even Treasury Secretary Steve Mnuchin called out the proposal earlier this year as overly generous to business interests.

“The money coming in the PPP is not taxable. So if the money that’s coming is not taxable, you can’t double dip,” Mnuchin said on Fox Business. “You can’t say you’re going to get deductions for workers that you didn’t pay for.”

Even so, a growing chorus of lawmakers has demanded that businesses should be able to deduct tax-free PPP money. The demand has been pushed by the most senior lawmakers on the tax-writing committees, Rep. Richard Neal, D-Mass., and Sen. Chuck Grassley, R-Iowa. In recent months, nearly half a dozen standalone bills by other members of Congress have floated variations of the same PPP tax deduction proposal.

The latest round of coronavirus relief legislation has been released in two parts. The first bill, slated at a cost of $748 billion, funds the PPP program along with $300 a week for unemployment benefits. The second bill ties Republican-supported liability protections for companies to Democrats’ ask for funding for state and local governments — the two segments of legislation that have stalled negotiations for weeks.

There has been little pushback to these tax giveaways, reflecting the general consensus in Congress around the benefits of business tax cuts, no matter how lavish. Media outlets and many lawmakers, including Senate Majority Leader Mitch McConnell, R-Ky., have described the PPP extension and expansion as an “uncontroversial” aspect of stimulus talks.

Many of the provisions of the original CARES Act, the coronavirus relief legislation passed in March, have been criticized as giveaways to the wealthy with little guardrails to help those most in need.

The Intercept has previously noted that the “net operating loss” carryback provision has resulted in hundreds of millions of dollars in IRS tax refunds to major corporations that have gone on to spend money on stock repurchasing plans to reward investors. The law also included a tax revision that is estimated to save real estate investors and owners over $170 billion over the next 10 years.