Hospital CEOs Have Gotten Rich Cutting Staff and Supplies. Now They’re Not Ready for the Next Wave. 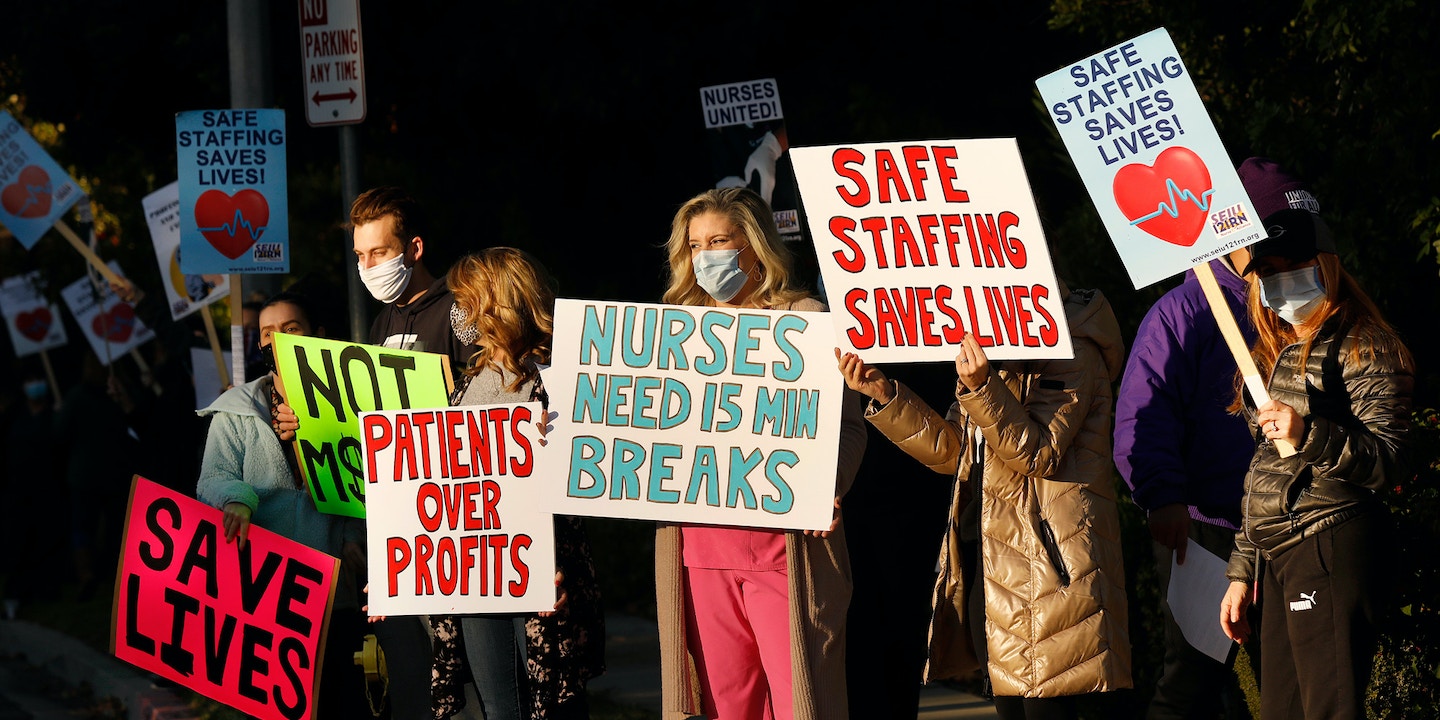 In 2006, Montefiore Medical Center in the Bronx had healthier patients, just enough nursing staff to take care of them, and a CEO who was earning $2 million a year, a senior nurse and union leader told The Intercept. Fifteen years later, its patients are sicker than ever before, its staffing levels are inadequate, and, as of 2018, its new CEO is earning $13 million per year.

The nonprofit hospital, like hundreds of others across the nation, has been cutting costs, progressively going leaner on staffing and supplies over the years. This accelerated approach has meant that the pandemic has hit the hospital, especially health care workers, doubly hard. The nurse, Karine Raymond, has provided care at the facility for 27 years. In the second wave of Covid-19, as in the first, she and her colleagues are taking care of double the patients that they typically do.

“It’s untenable and unmanageable and left us feeling very concerned that perhaps we might have done better if circumstances were different,” said Raymond. “[Our CEO] makes $13 million. How many nurses would his salary pay for? I do have a problem with seeing the suffering of the community I’m supposed to serve while others are collecting funds that have been provided by state and federal governments just because they can.”

Nurses were overworked before, but since March, many nurses have left the industry entirely, retiring early or seeking other work. While personal protective equipment supplies are more abundant now than in the spring, nurses are more burnt out than ever — just as hospitals are getting ready for another wave of Covid-19 patients.

The executives who typically make the decisions at the United States’s hospitals, whether for-profit or ostensibly nonprofit, are uniquely unprepared for the coming deluge, experts say. A decadeslong failure to recruit and retain health care workers like nurses, technicians, and nurse’s aides has made U.S. hospitals less able to manage the scope of a pandemic, and makes it much more likely that hospitals will break down, as they did in the spring in Wuhan, Italy, and New York City.

“Even before the pandemic hit us so hard hospitals were using a policy called ‘Lean,’ which is just-in-time staffing and supplies,” said Linda Aiken, a professor of nursing at the University of Pennsylvania who has long studied the relationship between nurse staffing and patient care. The concept of lean hospitals was developed by management consultant Mark Graban in 2009, but business practices imported from manufacturing based on lean staffing began to be introduced in health care starting in the early ’90s. “All of our research shows those policies were a failure well before Covid and now they are a disaster during this national emergency,” said Aiken.

Graban said that some executives have drawn the wrong lessons from the management practice. “It’s unfortunate, if not harmful, when hospital executives misunderstand Lean to mean cost cutting, working harder, or not having enough supplies,” he said. “Lean, with its origins at Toyota, provides a management system and improvement method that focuses on first improving safety, quality, and access to care — and there are many published journal articles that document this. Lean aims to reduce the overburden on workers by improving the way work is done. A true ‘just in time’ system is designed to have the right number of people and supplies and medications. Lean organizations don’t boost the bottom line at the expense of employees, with UMass Memorial Health as a noteworthy example of a system that had a ‘no furloughs, no layoffs’ commitment even during this pandemic.”

Bonnie Castillo, executive director of National Nurses United, the largest union of registered nurses in the U.S., lambasted “Lean” in a statement at the beginning of December, saying, “Lean industry practices slashed preparedness. They treat safe staffing and needed supplies as a drag on budget goals and profit margins, rather than the prerequisite for a humane, fully prepared patient-oriented health care system.” Nurses from Montefiore New Rochelle Hospital protest working conditions, staffing shortages, and lack of contract amid a resurgence of Covid-19 infections outside the hospital in New Rochelle, N.Y., on Dec. 1, 2020.

Lean policy has had concrete results on the ground. “During the current surge, nurses are seeing patients die who could have been saved, if they had the proper staffing and supplies,” National Nurses United said in a recent statement. Staffing shortages at hospitals have been reported in California, New York, Pennsylvania, Kansas, Maryland, Texas, Alabama, Idaho, Massachusetts, Arizona, Louisiana, Oregon, and Nevada in just the past two weeks. While the staffing crisis at this point is similar to the spring, it was supposed to be a once-in-a-lifetime event, and now it’s happening again. The result, Raymond says, is that “the older nurses are retiring out and the younger nurses aren’t staying” at a pace more rapid than pre-pandemic.

A majority of U.S. health care goes through hospitals that have been set up as nonprofit, which means that they are exempted from federal, state, and nearly always local taxes, and are obligated by their charter to operate in the public interest. (Those charters, however, don’t get in the way of handsome executive compensation packages.) Fifty-eight percent of hospitals are nonprofit, 20 percent are public, and 21 percent are for-profit, dominated by big chains like HCA Healthcare, Tenet Healthcare, and LifePoint Health.

“Nominally nonprofit community-spirited institutions have actually come to operate as profit-maximizing monopolies,” with the excess going to executive compensation instead of dividends, said Phil Longman, the policy director at the Open Markets Institute. “That has consequences here because a huge part of what happens with consolidation is a lot of hospitals are closed, so we don’t have the surge capacity that we need for this pandemic.”

Longman has highlighted in particular the role of the University of Pittsburgh Medical Center, or UPMC, the dominant hospital monopoly in western Pennsylvania. When crafting the organization’s future in 1995, its president, Jeffrey Romoff, said, “At the heart of the matter is the conversion of health care from social good to a commodity.”

Suzanne Gordon, an independent health care scholar, said that type of thinking has affected hospitals’ ability to manage the pandemic.

“If you have an economic view of health care as opposed to a patient care view of health care you’re going to define effectiveness and efficiency not as patient outcomes, but as how few staff can you have to produce this widget which is some version of patient care,” said Gordon. “If you have a workforce that is overloaded before a pandemic and demoralized and too old, you’re going to have problems with staffing.”

Montefiore is not the only hospital that has seen significant escalations in executive compensation. The CEO of Banner Health in Phoenix, which has 28 hospitals in six states, made $21 million in 2018, while the CEO of Ascension Health, a Catholic health system with 145 hospitals in 19 states and Washington, D.C., also made $13 million. The rising executive compensation is a reflection of the financialization of health care, by which hospitals, regardless of their tax status, become not community-focused institutions but entities whose raison d’être seems to be to enrich their executives. A 2018 study from Clinical Orthopaedics and Related Research found that hospital executive salaries increased by 9.3 percent annually from 2005 to 2015.

An August study from the BMJ Quality & Safety Journal confirmed Gordon’s thesis. It found that, in Chicago and New York City, “Hospital nurses were burned out and working in understaffed conditions in the weeks prior to the first wave of COVID-19 cases, posing risks to the public’s health. Such risks could be addressed by safe nurse staffing policies currently under consideration,” referring to legislation that would mandate nurse-to-patient ratios. Only California has limits on how many patients can be assigned a nurse. “Over half the nurses in both states experienced high burnout,” the study additionally reported. “Half gave their hospitals unfavourable safety grades and two-thirds would not definitely recommend their hospitals.”

“What the research shows is that professional nursing care is the primary service provided by hospitals, but there are many decision makers who are not clinicians. And so they don’t naturally gravitate to science,” said Aiken, the study’s co-author. “They think it is technology, or the quality of the food, or having more marble in the lobby. But there’s so much research that shows that’s absolutely not the case. The primary service on the inpatient side is nursing.”

“So many hospital decision makers don’t read the scientific literature because many of them come out of manufacturing and other business sectors. Nurses are the alarm bells, and we have never figured out anything that replaces the hands-on, eyes-on-the-patient professional assessment that nurses do that allows everybody else to intervene in a timely way,” said Aiken.

Nurse short-staffing has been found to lead to higher levels of patient infections and mortality overall. Nursing turnover in 2018 was 17 percent, which nursing unions and numerous studies have attributed to chronic short-staffing and poor working conditions.

“Hospitals are being operated for the purposes of maximizing not literally profit, as they’re technically nonprofits, but you can see the luxury cars in the parking lot and deduce what’s going on,” said Longman.

Hospitals have consistently opposed efforts to expand the California model to other states. In 2018, the Massachusetts Hospital Association spent $25 million campaigning against a ballot initiative that would have guaranteed nurse-to-patient ratios. Other state-based hospital associations around the country have consistently lobbied against ratio laws as well. “Taxpayers pay around 70 percent of the cost of hospitals [through Medicaid and Medicare], so we’re paying for people to act against us as patients,” said Gordon.

“These hospital executives think there’s a faucet of nurses that you can turn on and off and nurses will come out. It doesn’t work that way; it takes two, four, six, eight years to produce nurses. You don’t just want bodies, you want experienced bodies. You want the appropriate skill mix so you have to have enough nurses there to be able to fill the pipeline of retirement,” Gordon concluded. “I just think this is a completely predictable and avoidable crisis. Do we learn from this or do we go back to the same old, same old?”

While safe staffing legislation faces an uphill battle in the Senate no matter the outcome of the Georgia runoffs in January, Democrats in the states could take action, following California’s lead. Besides California, there are 14 states where Democrats have control of both houses of the legislature and the governorship, including New York, Illinois, Virginia, New Jersey, and Colorado.

“If we’re going to provide the level of care that we need to keep our patients healthy and safe and out of the hospitals or home quicker, we have to have safe staffing,” said Raymond, the nurse.

This story was updated to include comment from Mark Graban.