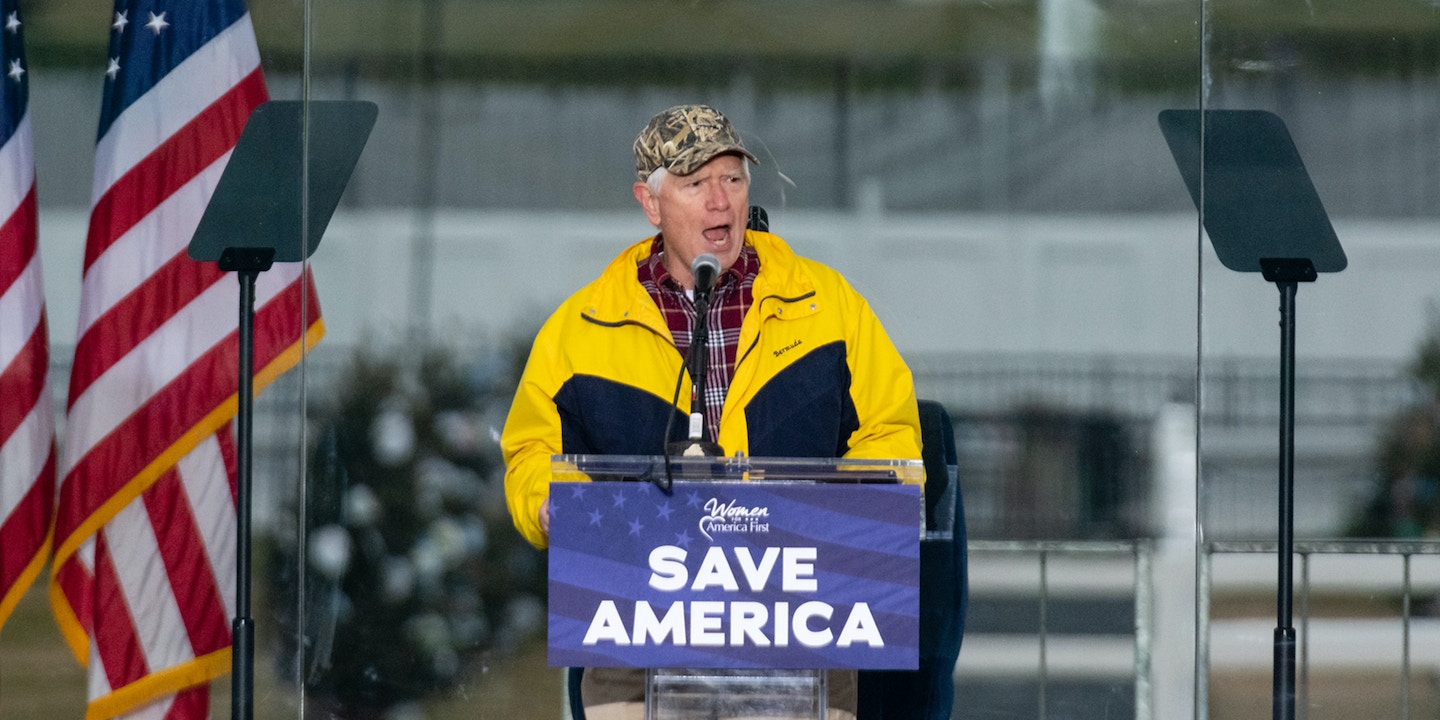 Rep. Mo Brooks, R-Ala., one of the most outspoken lawmakers in support of Donald Trump’s false claim that the presidential election was stolen, floated the possibility of violence as a reasonable form of political resistance while speaking on local Alabama talk radio today.

On Wednesday, Brooks was one of the opening speakers at the “Save America” rally that ended with Trump supporters forcing their way into congressional offices after violent clashes with the U.S. Capitol Police. The riot resulted in dozens of injuries and at least four deaths.

On the radio, Brooks defended his participation in the rally the previous day, baselessly charged that there was “mounting evidence of fascist antifa’s involvement in all of this,” and said that those involved in storming Congress should be prosecuted. Brooks did not immediately respond to a request for comment from The Intercept.

And, the Alabama lawmaker added, he wanted listeners to consider the historical parallels between the United States and Nazi Germany, during which citizens “lost faith in the ballot box.” In his comparison, Brooks called Adolf Hitler’s Germany “socialist.”

“When you bring up one of your options to be violence, it brings us directly to your words yesterday, Mo,” Murphy continued. “And I’m wondering if you regret saying what you said at the rally yesterday.”

The congressman said he had no regrets.

Listen to Brooks on Murphy’s radio show below:

Brooks is one of a small number of lawmakers claiming without evidence that left-wing agitators had posed as members of the pro-Trump riot to lead the violence on Wednesday.

In a series of tweets posted this morning, Brooks claimed he was making that assertion based on an anonymous congressman who was told “on TUESDAY by Capitol Police officer that intelligence suggested fascist ANTIFA was going to infiltrate the Trump rally by dressing like Trump supporters.”

Brooks’s claims have been thoroughly debunked, and the participants who have been identified thus far are all Trump supporters. The House Administration Committee, which oversees the Capitol Police force, has announced that it will conduct an inquiry into the riot and the response by law enforcement. On Thursday, the chief of the Capitol Police also indicated he would resign.

Later in the day today, Brooks again floated violence as a viable response in a series of tweets.

“In the past, when citizens of a Republic lose faith in their ability to guide the destiny of their country via the election process, they have been FORCED by that country’s rulers into a box and FORCED to choose from any of 3 bad options,” which include “1. Flee (emigrate). 2. Submit. 3. Fight back with violence. THAT is why we must fight for honest & accurate elections.”

The inflammatory rhetoric suggests the Alabama lawmaker has little interest in stepping back from his rhetoric earlier this week. Brooks opened the “Save America” rally with a searing speech that charged, “Today is the day American patriots start taking down names and kicking ass.”

During his remarks, he asked the crowd to consider the American ancestors who sacrificed their blood and “sometimes their lives” to create the “greatest nation in world history.”

“So I have a question for you,” Brooks continued. “Are you willing to do the same?”

The 10-minute speech included complaints about the results from the Georgia Senate runoff election, in which Democrats won both Georgia seats and control of the Senate, as well as Brooks’s claim that “socialist Democrats attack and mock our moral values,” including the expression of a supposedly “hedonistic prayer” in the “United States Capitol, one of the most revered places in America.”

Republicans who would not support the effort to decertify Electoral College votes for President-elect Joe Biden also received scorn. “America does not need and cannot stand and cannot tolerate anymore weakling, cowering, wimpy Republican congressmen and senators,” yelled Brooks at the rally.

The speech ended with Brooks leading a chant of “USA! USA! USA!”

The event soon grew more boisterous, as participants began marching up the National Mall to the steps of Congress, where they began violently clashing with police officers. The surging crowd forced an evacuation of some lawmakers, though many were trapped in rooms barricaded by furniture and hiding behind a balcony above the House of Representatives’ floor.