America Is Not Exceptional. Its History of Violence Cannot Be Denied.

The delusion that national breakdown takes place only in foreign lands can have grave consequences for America. 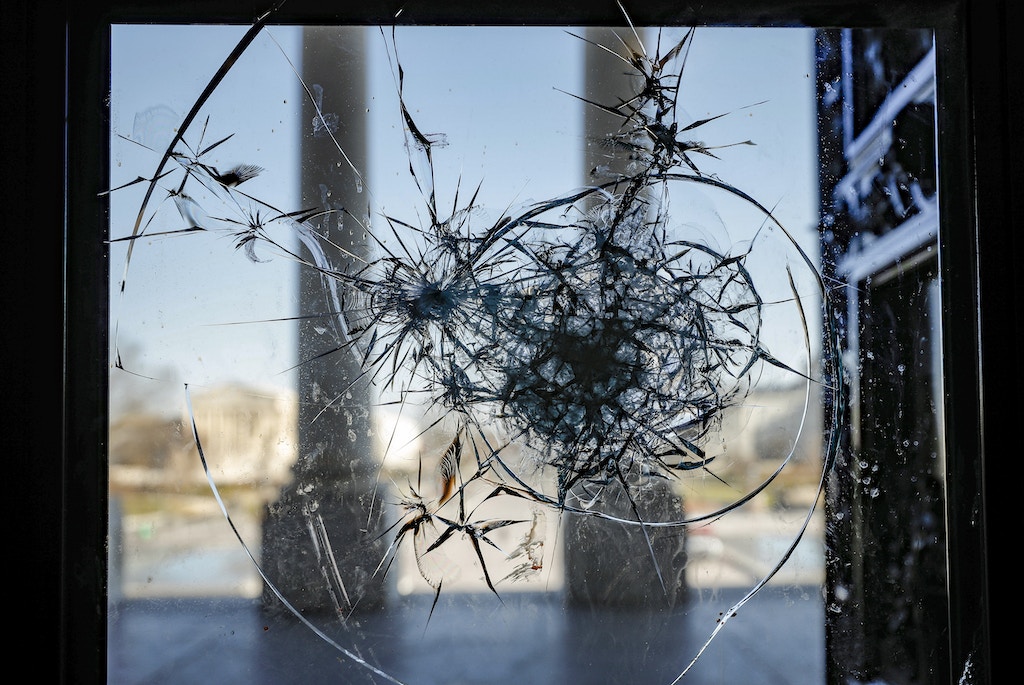 I am intimately familiar with violence, the kind that destroys everything, including your country. The kind of violence stemming from nationalist rhetoric that powerful people push in order to cling to power.

I was born in Bosnia when it was still a republic in Yugoslavia, and as a child in Sarajevo, I experienced the war that began in the early 1990s. When Donald Trump got elected, I tried to warn anyone who would listen about the dangers of nationalism. In response to my concerns, I heard that America is not the Balkans, that I was being excessively apocalyptic.

Yet as Trump’s supporters chaotically stormed the U.S. Capitol on Wednesday, people suddenly turned to the Balkans. The scenes of violence in Washington D.C. reminded them of Yugoslavia, or the Balkans, or Bosnia, and occasionally the Middle East too. Anywhere but the United States. To these people, it was clear that the violence expressed by the rioters was not “American,” that it was a foreign phenomenon. Political violence is considered to be backwards, so it’s only natural to compare what happened to places we already considered as backwards: the Third World filled with its savagery.

I come from one of those places. I saw the Serbian leader Slobodan Milosevic instigate the ethno-nationalism that would lead to genocide in Bosnia, where many of my own family members would be killed. These past four years, I’ve also seen it in Trump, as his desperate attempts to cling to power resulted in the further antagonization of the already marginalized. But I saw it prior to Trump’s reign too, as a Muslim refugee who settled in the United States in the post-9/11 world.

Those of us who work in genocide education do so not out of a sense of catharsis but rather in an attempt to show to others, particularly those in the West who have led relatively safe and secure lives, that what happened to Bosnians in the 1990s or to the Jewish people in the 1940s can happen anywhere.

Yet I have come to realize that despite the scenes at the Capitol and all the violence that has broken out in this past year, with Trump supporting white nationalist militias, many Americans still truly believe that the kind of violence experienced by the “other” will somehow escape them. American exceptionalism, even when it’s falling apart right in front of your eyes, somehow remains prevalent.

What happened to Bosnian Muslims in the 1990s started with the rise of Serbian ultra-nationalism, and because it went unchecked, it deluged the country. The genocide did not happen suddenly, as genocides never do. Acts of violence, particularly the kind that are fueled by the rise of the far right and fascism, do not occur in a vacuum. It starts slow, but it explodes quickly. It can happen anywhere, and it can absolutely happen to anyone, including Americans. It is beyond time to shatter the sense of American exceptionalism.

History exists to teach us the lessons we sometimes wish to ignore. That is why it’s important for academics and journalists to draw parallels between far-right leaders who have incited violence, such as Trump and Milosevic. Nonetheless, where there are comparisons, there will be differences too. Trump is not an outlier in the United States but rather its strongest reflection of the flaws within. A Bosnian woman and her mother mourn by the grave of their loved one at the cemetery for victims of the Srebrenica genocide in Potocari, Bosnia-Herzegovina, on July 11, 2020.

America, just like myself, is intimately familiar with violence. Whether or not it chooses to accept this truth, violence is a part of this nation’s fabric. This is a country that just a century ago massacred Black civilians and destroyed their homes in Tulsa, Oklahoma. Less than 55 years ago, this country was a place where segregation was law. We can reach back further too. Indeed, if you search for “American violence” on Google, you will get a Wikipedia page that includes an extensive list of incidents of civil unrest, far more than you will find in the Balkans.

I worry for America and that in its hopeless idealism to retain its exceptionalism, it will continue to ignore and deflect the issues that have plagued it for generations now.

It is easy to turn to the Balkans and convince yourselves that nationalist violence is a foreign concept that will not touch you. The violence we saw this past summer and the pandemonium of this week’s events show very clearly that no, America is not the Balkans. America is America, with its own brand of violence that stems from its own history, which is very much rooted in brutality, and the exceptionalism that allows most Americans to ignore the brutality.

This exceptionalism, which allows many Americans to convince themselves that national breakdown takes place in foreign lands only, will undoubtedly have grave consequences. If it continues, Americans will not be prepared to deal with the inevitable rise and power of fascism. As someone who saw firsthand what ignoring nationalism does to a people and a country and the horrors it leads to, I implore those who choose to believe in American exceptionalism: Confront the horrors of this country’s past. Only then will you have a standing chance of beating the tide of rising fascism.