Capitol Mob May Say Trump Made Them Do It. But That Hasn’t Always Worked as a Defense.

A Kansas man who plotted to blow up Somalis argued that he was swayed by the president’s anti-immigrant rhetoric. He got 30 years. 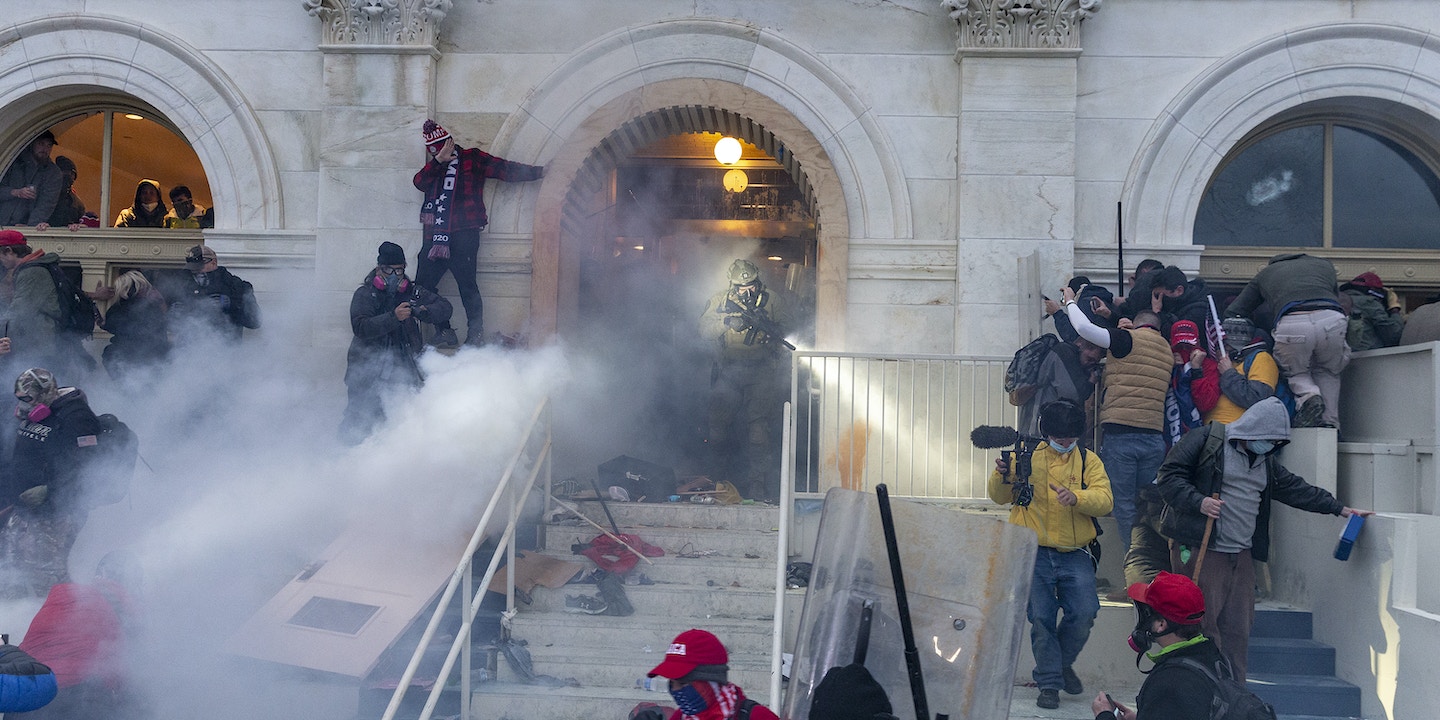 Carrying Confederate flags and white supremacist symbols, an unruly mob of mostly white men invaded the U.S. Capitol on January 6. Broadcast by television news cameras outside and cellphones within, the violent and unsuccessful insurrection ended in the death of five people and, in the following days, dozens of arrests.

There was Adam Johnson, dressed in a wool Trump hat and Asics running shoes as he posed for photos in the Capitol while carrying away Nancy Pelosi’s lectern. The stay-at-home father was arrested at his home in Florida.

In Chicago, federal agents arrested Brad Rukstales, the chief executive of a marketing technology firm, for being among the rampagers at the Capitol. “It was the single worst personal decision of my life,” Rukstales said in a statement on Twitter.

Derrick Evans, a Republican state lawmaker from West Virginia, livestreamed himself storming into the U.S. Capitol. “We’re in! We’re in!” Evans said. “Derrick Evans is in the Capitol!” Evans resigned from his elected position in West Virginia, and like dozens of other alleged rioters, he faces criminal charges in Washington, D.C.

As FBI agents arrested the West Virginia lawmaker-turned-insurrectionist at his home, Evans’s grandmother could be seen in a video coming out of the house. Visibly angry and shaken, she appeared to blame the president for her grandson’s arrest. “He’s a fine man,” she said of Evans, adding sarcastically: “And thank you, Mr. Trump, for invoking a riot at the White House.”

Indeed, if previous cases involving right-wing violence inspired by Donald Trump are any indication, blaming the president may be one of the few strategies available to those arrested for their roles in the Capitol mob.

James R. Pratt, a defense lawyer in Kansas, represented a man who was inspired to violence by Trump in 2016. Patrick Stein conspired with a couple of friends, as well as a pushy FBI informant, in a plot to bomb Somalis who lived in their community. “Number one, the cockroaches got to go, period,” Stein said of the Somalis. Stein had believed Trump’s rhetoric from the 2016 presidential campaign: that the Obama administration was allowing Muslims, and possibly terrorists, into the country without background checks.

Stein was convicted at trial of conspiring to detonate a bomb. Pratt, his lawyer, asked the judge for leniency in sentencing, describing how Stein saw “Trump’s appeal as the voice of a lost and ignored white, working-class set of voters.” Pratt argued that Trump’s “rough-and-tumble verbal pummeling” persuaded Stein that terrorists were being allowed in and that he could do something to protect the country.

U.S. District Judge Eric F. Melgren, a George W. Bush appointee, was unmoved by the argument. “This kind of conversation is endemic in the history of our country,” Melgren said in court, referring to Trump’s heated rhetoric. “And it’s not just coming from the right. The left has incredible attacks on conservative Christians. You can listen to that on MSNBC and other outlets that they have. But none of that explains or justifies anything remotely like what we’re dealing with here.” Melgren sentenced Stein to 30 years in prison.

“Our point about Trump was that he made what they believed seem legitimate,” Pratt said in an interview Monday.

“I mean, it’s coming from the president of the United States. It’s not coming from some guy in his basement with a website followed by a thousand people.”

Pratt sees similarities between his Trump-inspired client and the people who stormed the Capitol last week. “I do see a parallel in what Trump did on Wednesday, and even before then, about normalizing this,” Pratt said. “I mean, it’s coming from the president of the United States. It’s not coming from some guy in his basement with a website followed by a thousand people. He’s up there saying, ‘We need to fight. We need to take this back. The election was stolen.’ Any feelings that his followers had, whether they came from Trump before the election or after the election, that it was stolen, he went out of his way to normalize those feelings for them.”

Trump’s ability to inspire violence through the normalization of misinformation — whether directly through his speeches and tweets or indirectly through movements he has refused to disown, such as the conspiracy theory QAnon — has been a growing phenomenon. Law enforcement officials investigate the site of an explosion at the Dar Al-Farooq Islamic Center in Bloomington, Minn., on Aug. 15, 2017.

Michael Hari, a conservative Anabaptist living in Illinois, bombed a mosque and tried to bomb a women’s clinic. He was a fervent Trump supporter who submitted a $10.9 billion proposal to build Trump’s border wall to the Department of Homeland Security, despite having no relevant experience. “I don’t think Trump’s rhetoric is getting people to commit violence,” a friend of Michael Hari told The Intercept in 2019. “It’s not like he’s saying, ‘Go bomb a mosque!’ I think it’s subtler. I think he’s flipping the switch in certain people. And I think he flipped that switch in Michael Hari.” Hari was convicted at trial in Minnesota and still faces sentencing. His lawyer did not respond to a request for comment.

In July 2018, an unemployed Marine veteran blocked traffic with an armored vehicle on the Hoover Dam. Armed with an AR-15 rifle, a handgun, and a stun grenade, Matthew P. Wright was inspired by QAnon: a baseless conspiracy suggesting that Trump is battling a secret of cabal of Democrats and celebrities operating an international sex-trafficking ring. Wright was sentenced to nearly eight years in prison after pleading guilty in Arizona state court to making a terrorist threat and fleeing law enforcement. Wright told a psychologist after his arrest that his actions were influenced by information he found on social media — which, he said, made him “feel more like a patriot.”

Cesar Sayoc, a Florida man whose van’s windows were covered in pro-Trump stickers, mailed pipe bombs to an array of Democratic Party politicians and Trump critics, including former President Barack Obama, former Vice President Joe Biden, and former Attorney General Eric Holder, just before the 2018 midterm elections. Sayoc pleaded guilty to using weapons of mass destruction and interstate transportation of explosives. In asking the judge for leniency in sentencing, Sayoc’s lawyers mentioned Trump 59 times in their court filing and described how Sayoc “viewed Donald Trump as everything he wanted to be: self-made, successful, and a ‘playboy.’” Sayoc was trapped in a right-wing information bubble on social media and cable news, his lawyers said.

Sayoc “viewed Donald Trump as everything he wanted to be: self-made, successful, and a ‘playboy.’”

“He began to consider Democrats as not just dangerous in theory, but imminently and seriously dangerous to his personal safety,” Sayoc’s lawyers wrote. “President Trump did nothing to dissuade [him from] this message.”

U.S. District Judge Jed S. Rakoff, a Bill Clinton appointee, acknowledged in his ruling that he was swayed to a small degree by the argument that Trump’s rhetoric had influenced Sayoc, writing that he was not surprised “someone of Sayoc’s emotionally fragile nature not only became infatuated with a public figure, in this case Donald Trump, but also came to view Mr. Trump’s political opponents as demons who were out to destroy not just Mr. Trump but Mr. Sayoc as well.” Rakoff sentenced Sayoc to 20 years in prison rather than the life sentence prosecutors requested.

Just four months ago, in October 2020, the FBI arrested 13 Michigan men who plotted to kidnap Gov. Gretchen Whitmer, a Democrat whom Trump had criticized on Twitter. “LIBERATE MICHIGAN!” Trump tweeted on April 17, in response to Whitmer’s statewide coronavirus lockdowns.

Although it’s unclear whether the Michigan plotters will blame Trump for inspiring their actions, Whitmer said she believed the president was responsible. “When our leaders speak, their words matter. They carry weight,” Whitmer said after her would-be kidnappers were arrested. “When our leaders meet with, encourage, or fraternize with domestic terrorists, they legitimize their actions and they are complicit. When they stoke and contribute to hate speech, they are complicit.”

Then last week, as Congress met to certify the election of Joe Biden, Trump spoke to thousands of supporters in Washington, D.C., telling them to “walk down to the Capitol … because you’ll never take back our country with weakness. You have to show strength, and you have to be strong.”

“I don’t think it’s going to play [well] for whoever killed that police officer. But if it’s someone who went into the rotunda and yelled at cops for a little bit and turned around and went out, it could work.”

A short time later, Trump’s supporters breached the entrance of the Capitol. Vice President Mike Pence, senators, congressional representatives, and their staffs took shelter as the building was ransacked.

Pratt said that he expects lawyers representing the alleged insurrectionists to request leniency at sentencing by arguing that their clients were inspired to act by the sitting president of the United States.

“Certainly, I don’t think it’s going to play [well] for whoever killed that police officer,” Pratt said, referring to the Capitol Police officer who was beaten to death during the insurrection. “But if it’s someone who went into the rotunda and yelled at cops for a little bit and turned around and went out, I don’t know — it could work. I would make that argument.”