The capital is a city of soldiers. They are in the different states of alertness that soldiers inhabit depending on what’s happening around them. They are patrolling, they are on guard, they are sleeping — and they are gawking like tourists at the statues of a nation that has been stunned into a mixture of fear and reflection. There has been a nearly overnight militarization of Washington, D.C., after the U.S. Capitol was stormed by a mob of Americans inspired by the words, delusions, and narcissism of President Donald Trump — who will be known as “former president” in a merciful matter of hours. In this interregnum, between the Trump riot and the Biden presidency, the city has been turned into a geometric hive of fences and checkpoints and thousands of soldiers. It is a panorama of military occupation that most Americans would regard as the exclusive plight of unfortunate foreigners, not themselves, not their country. 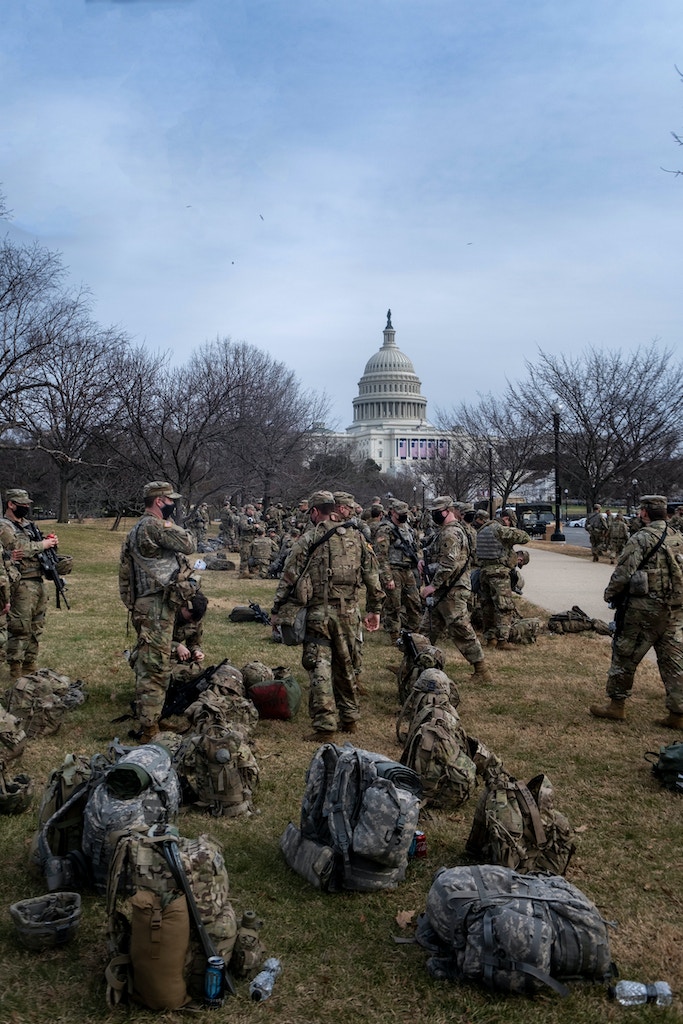 Photographer Ron Haviv, on assignment for The Intercept, roams around Washington, D.C., and sees what is there and notices what is not. Haviv is one of the most lauded war photographers of our times, and what his camera captures is both remarkable and banal. “The riot has turned a once free-looking city into a city that’s on the defensive, waiting for another attack,” Haviv observes. “But there is no visible enemy. It’s an enemy being ascertained through online chatter, through rumors. There’s no opposition in the streets, no militia, no Trump supporters. So it’s a bit surreal, all this defense against something that doesn’t physically exist at the moment.” 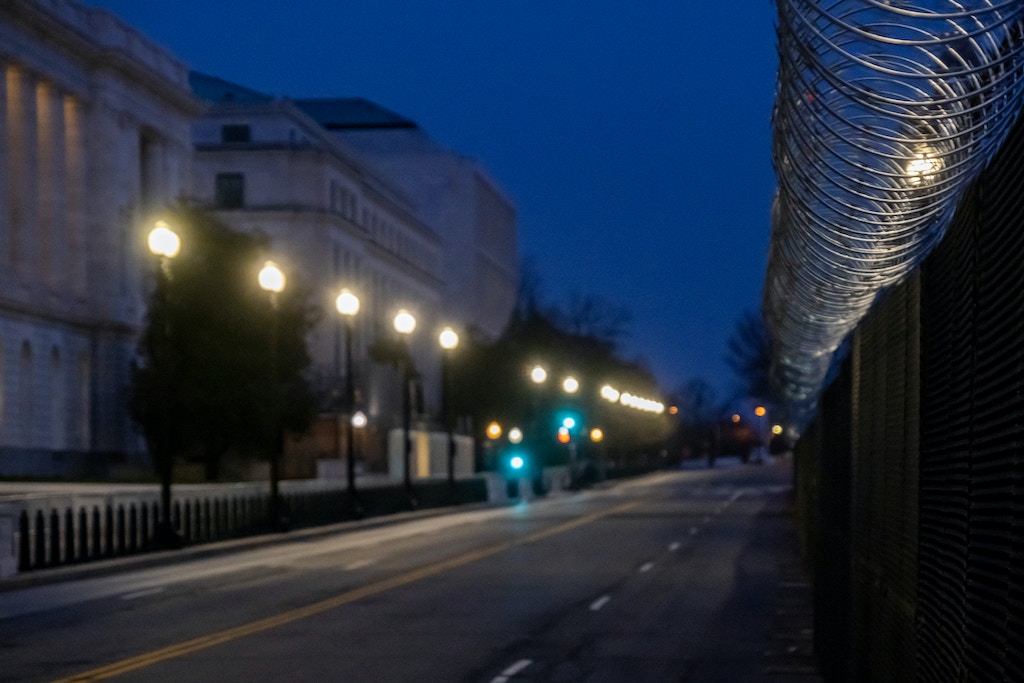 These pictures are dumbfounding. A federal building at night, with a row of streetlights on one side of the avenue and coils of barbed wire on the other. The Capitol glimpsed through the thin fabric of a flag, through a fence, through soldiers. The troops and their gear in a heap on the ground, humans and weapons and backpacks sloshed together in an indistinguishable combat green heap. There are no civilians in these pictures. The year is 2021, the month is January, the country is America, the capital and its reality are ours: We made it, we live in it, here it is. The National Guard walks in view of the Capitol as security measures take effect ahead of the inauguration of President-elect Joe Biden in Washington, D.C., on Jan. 19, 2021.

Haviv was at the riot on January 6, inside the Capitol. He listened to the incendiary speech outside the White House by Trump and moved with the crowd that was under the president’s sway as it lumbered and agitated its way to Congress. What Haviv saw that day and what he sees in its tense aftermath, in a city that has undergone an armed transformation to ensure that a transfer of power, already violent, does not become violent once more — it is not so extraordinary, actually. Marine sentries at doors that were damaged on the January 6 incursion into the Capitol during rehearsals for the inauguration of President-elect Joe Biden on Jan. 18, 2021.

“Some of the photographs that I did inside the Capitol are interchangeable with Panama, Haiti, and other conflicts and civil wars and uprisings,” Haviv told the BBC a few days ago. “This is something I have seen in many places. The American people and the American government can no longer and should no longer think of themselves as being above everyone else. We are like everyone else.”
Wait! Before you go on about your day, ask yourself: How likely is it that the story you just read would have been produced by a different news outlet if The Intercept hadn’t done it? Consider what the world of media would look like without The Intercept. Who would hold party elites accountable to the values they proclaim to have? How many covert wars, miscarriages of justice, and dystopian technologies would remain hidden if our reporters weren’t on the beat? The kind of reporting we do is essential to democracy, but it is not easy, cheap, or profitable. The Intercept is an independent nonprofit news outlet. We don’t have ads, so we depend on our members — 35,000 and counting — to help us hold the powerful to account. Joining is simple and doesn’t need to cost a lot: You can become a sustaining member for as little as $3 or $5 a month. That’s all it takes to support the journalism you rely on.Become a Member