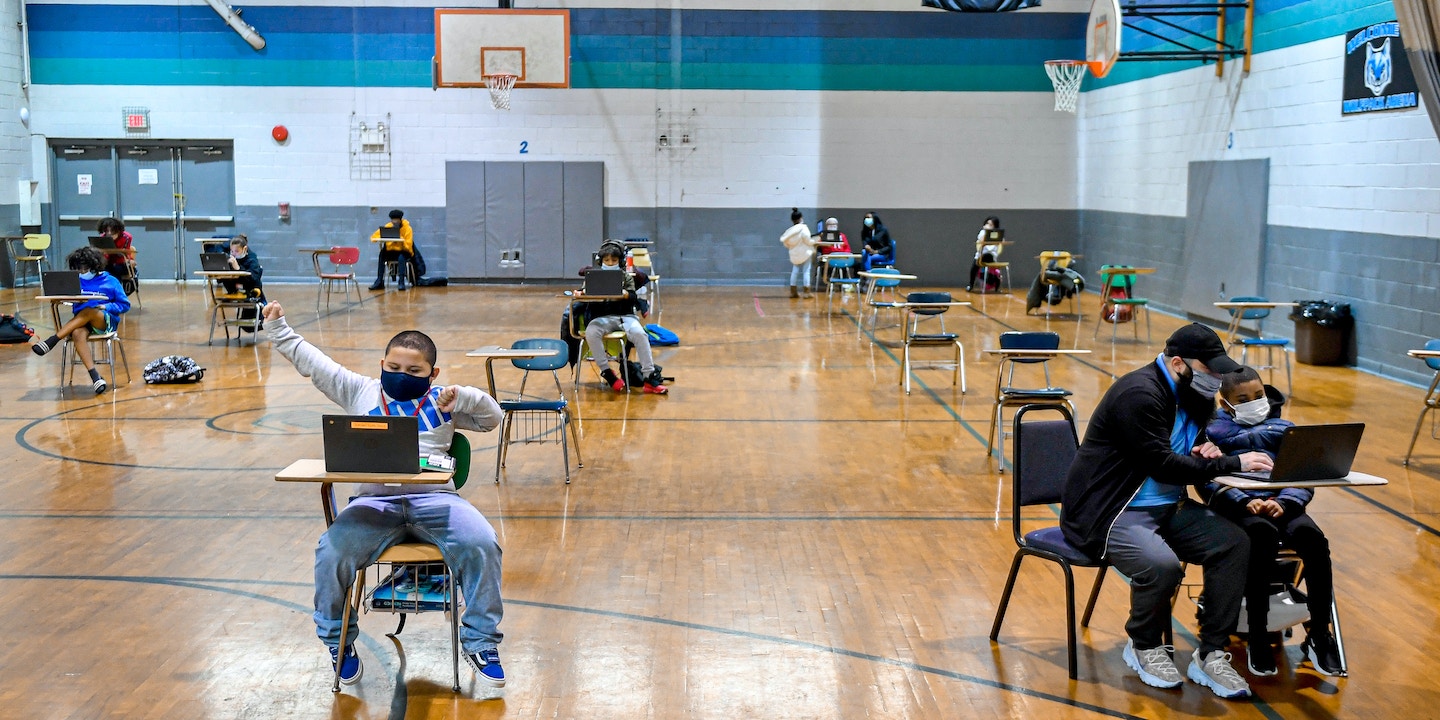 President Joe Biden’s recent pick to chair the Federal Communications Commission, Jessica Rosenworcel, is welcome news to those who have been fighting to help students access the internet during the coronavirus pandemic. It was Rosenworcel herself, one of just two Democrats on the five-person commission, who years back coined the term “the homework gap,” referring to inequities faced by kids living in communities with poor internet infrastructure or in households that can’t afford internet service.

The homework gap, or so-called digital divide, has been one the most difficult challenges for children throughout the pandemic. The disparity took on new urgency when schools nationwide closed to prevent Covid-19 spread in the spring, and internet providers also struggled to handle the surge in home usage among their regular customers. Ten months into the pandemic, millions of students still lack reliable connectivity, and many of those children have no plans to return to in-person school for months.

One change Rosenworcel has been advocating throughout the pandemic could now be used to address inequities in digital learning: By using her new emergency powers, she could authorize existing federal funding streams to go toward buying hot spots and tech devices for students learning at home who currently lack them. Rosenworcel did not return a request for comment. An FCC spokesperson said, “We need to put classrooms and libraries across the country on course for digital age learning, and a big part of that will be building an E-Rate program that can more fully meet these needs.” The spokesperson also referred The Intercept to Rosenworcel’s remarks before Congress in September, where Rosenworcel emphasized the FCC’s ability to get started “immediately.”

Established in 1996, the federal Schools and Libraries Program, commonly known as E-Rate, provides up to $4.15 billion annually to help connect public schools to the internet. The program was modernized in 2014 under reforms spearheaded by the Democrat-appointed FCC Chair Tom Wheeler. The goal was to help more schools access high-speed fiber broadband, but the modernization effort was opposed by then-FCC Commissioner Ajit Pai, who argued that the reforms were fiscally irresponsible and did not do enough to control fraud and abuse.

On January 18, 2017 — two days before Wheeler stepped down as chair — the FCC published a report describing the early results of its E-Rate modernization efforts. Among other things, the agency found that between 2013 and 2016, the percentage of school districts meeting minimum federal connectivity targets rose from 30 to 77 percent, and the costs schools paid for bandwidth fell dramatically. “E-Rate’s new approach to Wi-Fi has had a rapid and widespread impact,” the report concluded. “Nearly 50,000 schools and libraries received Wi-Fi support in 2015, compared to zero in funding year 2013 and 2014.”

But on February 3, 2017, shortly after President Donald Trump appointed Pai to succeed Wheeler as FCC chair, the report detailing the successes of the E-Rate reforms was retracted. Pai issued an order stating that the report “will have no legal or other effect or meaning going forward.” While a copy can still be found on the agency’s website, an FCC spokesperson told Education Week at the time that it “does not reflect the official views of the agency.” Education and tech advocates were baffled by the move, particularly since it showed that the reforms were working.

Pai’s continued opposition to E-Rate modernization was instrumental in hampering students from accessing more reliable internet during the pandemic. One little-known restriction on the program states that E-Rate’s federal funding can only go toward financing internet in physical classrooms and school libraries, meaning that the billions of dollars could not help students access at-home broadband or even subsidize internet at public libraries. Rosenworcel testifies during an FCC oversight hearing on Capitol Hill in Washington, D.C., on June 24, 2020.

Since the start of the pandemic, Rosenworcel, education advocates, and Democrats in Congress have urged Pai to use his emergency powers to lift the E-Rate restriction for virtual learning. “We should let our school libraries loan out wireless hot spots using the funding in the E-Rate program,” Rosenworcel said in August. “That’s not a radical idea. We could do that with existing law today, and we can do it at national scale.”

In March, 18 Senate Democrats, led by Massachusetts Sen. Ed Markey, sent a letter to Pai urging him to take emergency action during the crisis. In August, 38 Senate Democrats sent a similar letter. While Pai has claimed that his hands are tied and lawmakers would have to amend the federal Communications Act, which created the FCC, the senators pointed out that past FCC chairs have used their powers to reinterpret the statute, including in 2011 when then-Chair Julius Genachowski authorized a pilot funding off-campus connectivity for mobile learning devices.

In September, Colorado Attorney General Philip Weiser submitted an emergency waiver to the FCC requesting the ability to direct their E-Rate funds to students off public school campuses during the pandemic. Others have joined in support, including Karen Charles Peterson, Massachusetts’s commissioner of telecommunications and cable.

Kamala Harris was one of the Democratic senators to sign the letters sent to Pai urging the FCC to lift its restriction, and both Harris, now vice president, and Biden have emphasized the importance of addressing the digital divide during the pandemic and after it ends. Miguel Cardona, Connecticut’s education commissioner and Biden’s nominee for federal secretary of education, prioritized delivering tech devices to all students during the pandemic, and in December, Connecticut’s Democratic Gov. Ned Lamont announced that they were the first state in the nation to succeed in delivering internet and devices to every student in need.

Late last year, it looked like $3 billion in emergency funding for E-Rate was going to be included in Congress’s relief bill, but it was stripped out at the last minute.

“The FCC always had the power to utilize the E-Rate program to connect students at home for distance learning during the coronavirus pandemic, yet former Chairman Pai and the Trump administration just refused to act,” Markey said in a statement to The Intercept. “So I’m delighted that, under new leadership, the FCC is now poised to begin providing connectivity and devices to students in need.”

Sabia Prescott, an education policy analyst at New America, a think tank, told The Intercept that lifting the FCC E-Rate restriction, even at this point in the pandemic, would be an important step to getting internet to more students quickly — and it has no downside.

“The restriction has to do with where the Wi-Fi and tech devices can go, so right now schools that qualify for E-Rate can purchase Wi-Fi at discounted rates for their campus, and that’s why a lot of students have been sitting outside school buildings or in parking lots to gain access,” she said. “But with the restriction, schools can’t lend out devices or Wi-Fi hot spots that they’ve purchased or lend them to public libraries.”

Doug Levin, the national director for K12 Security Information Exchange, a nonprofit focused on protecting schools from cybersecurity threats, told The Intercept he’s pessimistic that lifting the restriction would help students much this spring, in part due to the failure of the federal government to provide earlier leadership and guidance on addressing remote learning needs.

To act now, Levin said, the FCC would realistically need to waive bureaucratic requirements like granting school districts waivers to spend E-Rate funds outside of a designated “funding window” and waive competitive bidding requirements, which “runs the political risk of future charges of waste, fraud, and abuse” by critics.

Still, Levin notes that even a more limited impact during the spring could help provide a “proof of concept” for a permanent expansion of E-Rate to fund off-campus broadband. “That is, the need to address the homework gap during remote learning can serve as the impetus for enacting Rosenworcel’s longer-term policy agenda,” he said.

Markey, who was one of the original authors of the 1996 E-Rate legislation, also has hopes that the program will be expanded. “Make no mistake,” Markey said, “this is just a first step, and Congress must still pass my legislation to provide billions more in E-Rate dollars to ensure all students can continue their education during this crisis.”