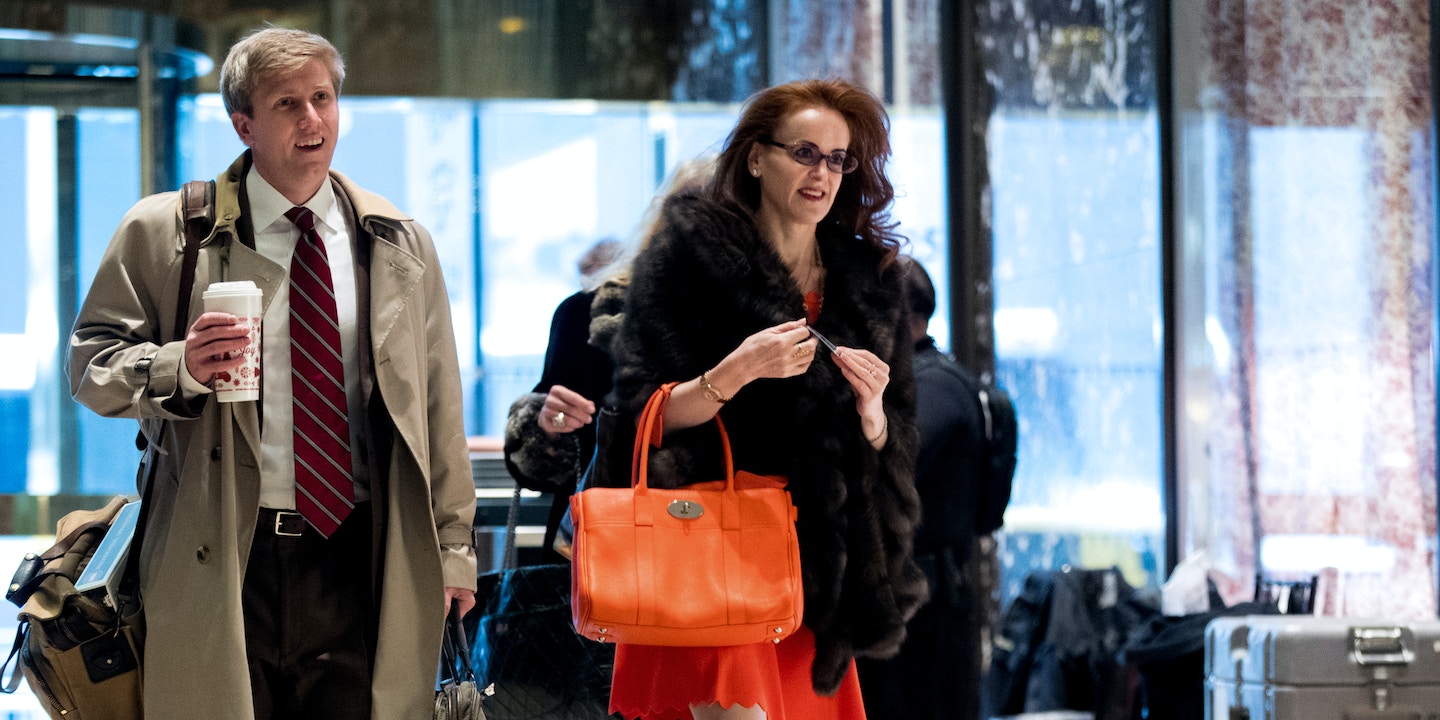 Joe Biden has been sworn in as president, but the divisions exemplified by the January 6 assault on the Capitol are here to stay, if billionaire heir and far-right financier Rebekah Mercer has any say in the matter. That’s according to her little-publicized 2019 book “What I Believe,” a transcription of a speech she gave in 2018 to the right-wing publishing house Encounter Books.

“[W]hat is the state of [the American] experiment today?” Mercer asked. “‘Now we are engaged in a great civil war,’ said Abraham Lincoln at Gettysburg in 1863. One hundred and fifty-five years later, it is barely hyperbolic to echo the Great Emancipator.” Raising the specter of violence, Mercer writes, “We are not yet in armed conflict, but we are facing an ever more belligerent, frantic, and absurd group of radicals in a struggle for the soul of our country,” referring to antifa specifically and casting her opposition to progressives more broadly in existential terms.

Mercer has been financing a host of right-wing individuals and groups involved in the storming of the Capitol, The Intercept reported earlier this month, from Arizona Republican Party Chair Kelli Ward to “Stop the Steal” organizer Ali Alexander, in addition to her role as a financier of news website Breitbart and the social network Parler. In 2020, Mercer’s father, Robert Mercer, donated $1.5 million to House Minority Leader Kevin McCarthy’s super PAC, the Congressional Leadership Fund, and the Mercers donated hundreds of thousands of dollars to the Republican National Committee.

The far right has used extensive “civil war” rhetoric, including on January 6. “How we got to this point is that fascist billionaires like Rebekah Mercer have bankrolled and fueled the rise of violent white supremacist and authoritarian forces in this country,” said Saqib Bhatti, the co-executive director of the Action Center on Race & the Economy. “Mercer co-founded Parler, the app that fascists used to plan violent demonstrations before it was shut down. She and her family have helped fund reactionary causes and candidates, including one of the patron saints of the insurrection at the Capitol, Ted Cruz. Mercer is not warning us against armed conflict, she is threatening us with it.”

The Mercers also own a firearms company, Centre Firearms Co., with a warehouse in Queens, New York, that includes “an Mk 19 belt-fed grenade launcher, capable of hurling 60 explosives per minute.”

Further incendiary rhetoric pervades Mercer’s book. She calls New Yorker reporter Jane Mayer a “shockingly unethical fantasist,” rails against “Antifa,” saying that it is “one of the militant arms of our current domestic foes, is intent on strangling our freedoms in the name of a belief system that, in the twentieth century, was responsible for the deaths of 100 million people.”

Mercer accuses progressives of having “taken to heart the lessons of Antonio Gramsci in their long campaign against our institutions and have obtained almost complete dominion over education.” Gramsci was an Italian Marxist philosopher who criticized the “cultural hegemony” by which capitalism maintains itself and wrote about the ways that institutions could be changed to more democratic forms through working-class leadership.

Finally, Mercer is indefatigable in her critique of the media. “Today, journalists of the mainstream media are little more than the Machiavellian foot soldiers of the progressive left, unethical to their very hearts, shameless about writing lies and defaming people, and assiduously filtering the stories they print through a prism of partisan prejudice,” Mercer writes. “I know just how unethical, deranged, and shameless some of these journalists really are because I have personal experience as a target for their defamatory fantasies and slanders.”

Mercer contrasted the media’s treatment of Brett Kavanaugh, the Supreme Court justice who was credibly accused of sexual assault by multiple women who went on the record, with its treatment of former President Barack Obama’s use of cocaine as a young man. “It’s just business as usual that the alleged drinking habits of a college student from decades ago are put under the microscope for review while the self-admitted use of hard drugs by the most recently retired Commander in Chief is pounced on as an opportunity to praise him and to point out how he had experienced much and knew much because of his criminal drug use.”

Mercer is incorrect that drug use is criminal. In 1962, the Supreme Court ruled in Robinson v. California that laws that criminalized drug use as opposed to possession or sale were unconstitutional.

“It’s clear that Mercer is not only funding extremist and far-right groups, but she is also reading their rhetoric on her platform, Parler,” said Margaret Huang, president of the Southern Poverty Law Center. “It’s no surprise that her language mirrors that of the hate groups — they are all on the same team. We need to start seeing donors like Mercer as part of the problem; she is enabling those who are trying to overturn the government.”

Mayer laughed upon hearing that Mercer had written a book and, in response to Mercer calling her a fabulist, said, “It would be so great if only the Mercers were a fantasy! But the more than 11,000 words I’ve written on them are fact, not fiction, which is why the Mercers have never asked for or received a single correction.”

Mercer did not respond to a request for comment.