A judge said the charges, which could have set a dangerous precedent against nonviolent protest, should never have been brought. 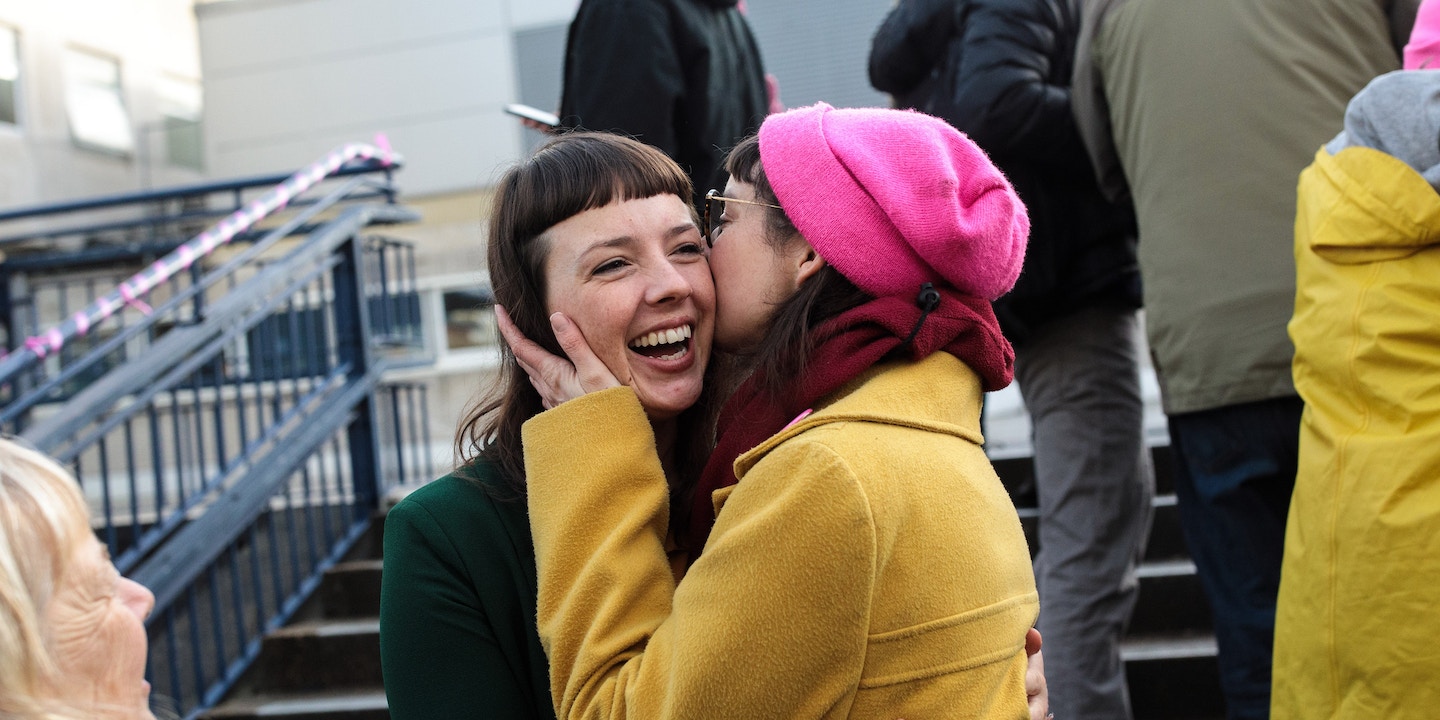 Amid a strict Covid-19 lockdown across the U.K., most of the activists who make up the Stansted 15 were in their respective homes, sipping tea and looking at each other through screens on a Zoom call, when they learned that their convictions had been overturned. The Court of Appeal move is the latest in a case that dates back nearly four years, to the night in March 2017 when the activists cut a hole through a fence at London’s Stansted Airport and locked themselves around a private plane chartered by the U.K.’s Home Office. The Home Office, the government department responsible for immigration, security, and law and order, meant to deport migrants and asylum-seekers to Nigeria and Ghana, where some faced threats of persecution. The Stansted 15 hoped to stop it.

“It’s totally ridiculous that that charge was brought against us. We’ve known that from the beginning.”

Two years ago, the activists were found guilty of a terrorism-related offense — charges that human rights groups and civil libertarians objected to for their severity. The Stansted 15 appealed the verdicts, and an appeals judge agreed that the charge had been inappropriate.

“It’s totally ridiculous that that charge was brought against us. We’ve known that from the beginning,” said Lyndsay Burtonshaw, a 30-year-old member of the Stansted 15 who works for the Quakers in Brighton, on England’s southern coast. “It was just a bullying tactic by the Home Office to try and criminalize solidarity and criminalize, specifically, anti-racist direct action. I’m so glad it’s been dropped because the repercussions on the right to protest and the right to do solidarity actions were looking threatened by the use of this legislation, and hopefully now that this appeal’s been won, that’s less of a likelihood.”

Originally hit with aggravated trespass, the Crown Prosecution Service upgraded its charges against the Stansted 15 to intentional disruption of services at an aerodrome, which falls under the “Endangering safety at an aerodrome” section of the Aviation and Maritime Security Act 1990, an obscure law intended to fight terrorism that carries a potential life sentence.

At the end of a grueling 10-week 2018 jury trial in Chelmsford Crown Court, about 30 miles northeast of London, all 15 were found guilty; at a sentencing hearing in early 2019, they avoided incarceration, receiving a combination of community orders, unpaid work, and suspended prison sentences that only needed to be served if another offense was committed within a specified time frame.

The government’s decision to charge nonviolent activists under a terrorism-related law attracted widespread attention and drew condemnation from groups such as Amnesty International, which observed the trial. It also set a dangerous precedent for prosecuting civil disobedience moving forward. Now, about two years after the guilty verdict, that precedent has been reversed, impacting not just the 15 people who have lived under immense stress, as well as with restrictions on travel and job opportunities, but anyone looking to engage in nonviolent direct action.

In the Court of Appeal ruling released on January 29, the lord chief justice, Lord Burnett of Maldon, concluded, “The appellants should not have been prosecuted for the extremely serious offence under section 1(2)(b) of the 1990 Act because their conduct did not satisfy the various elements of the offence. There was, in truth, no case to answer.”

For Raj Chada, a partner at Hodge Jones & Allen Solicitors who represented the activists, that last point was never up for debate. “We thought it was genuinely outrageous that they were ever charged with this offense, so the reason that it’s overturned was by far what we’ve always thought: that this was legislation that was designed, really, for terrorism, and that it should never be used in this sort of circumstance. And I think, broadly, the Court of Appeal has agreed,” he said after the ruling was announced.

“I think that it certainly cannot be used against peaceful protesters in the way that they tried in Stansted,” said Chada, of the use of the law. “Had the prosecution won, then it would have given the green light for this legislation to be used quite extensively. But because they didn’t, it might well be stopped in its tracks.”

“It’s been a lot. It’s been very stressful at times. But it’s really incomparable to what people who face deportation go through.”

With so much attention on their own fates, the Stansted 15 are determined to redirect the focus back to their original goal on that night they spent 10 hours locked together, immobile on a tarmac, at Stansted Airport: stopping deportations and, in particular, ending the government’s use of deportation charter flights, on which excessive restraint is sometimes used against detainees. Eleven people who were meant to be on the flight the activists blocked still remain in the U.K., according to a Freedom of Information request, and members of the Stansted 15 have since had the opportunity to meet a few of them.

“It’s been a lot. It’s been very stressful at times,” said Burtonshaw, speaking about an hour after she received the news of the successful appeal. “But it’s really incomparable to what people who face deportation go through.”