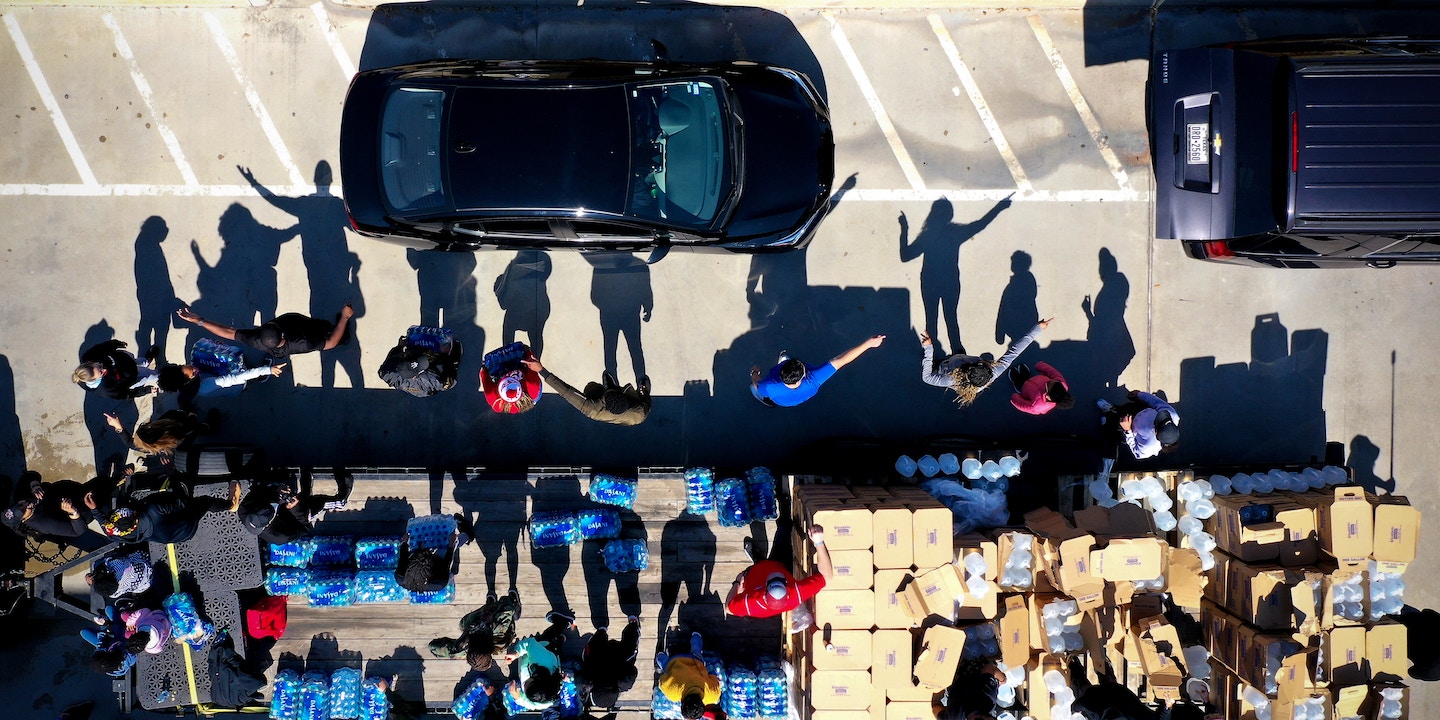 As a severe winter storm swept Texas last week, cutting electricity from millions of residents in freezing temperatures and causing nearly 70 deaths so far, some energy executives saw an upside to the catastrophe.

“Obviously, this week is like hitting the jackpot,” boasted Roland Burns, the chief executive and chief financial officer of Comstock Resources, a shale drilling company that benefited from the sudden demand for natural gas, in a call with investors last Wednesday. The price for gas, said Burns, has been “incredible.”

Marshall McCrea, the co-chief executive of pipeline firm Energy Transfer, told investors last Wednesday that his company has “been able to benefit,” given its ability to transport gas from storage facilities near Houston to power plants across the state. The company, McCrea said, has transported large volumes of gas in Texas and capitalized on “very strong commodity prices.” Energy Transfer, when reached for comment, said that McCrea’s comments “are pretty clear.”

Ronald Mills, the vice president of investor relations at Comstock Resources, said the company apologizes for the use of the word “jackpot” to describe natural gas prices last week. “That description was inappropriate and insensitive to the millions of Texans that did not have electricity or power, including many of our own employees who suffered through the same since we are based in the Dallas area,” said Mills in an email to The Intercept.

The price of natural gas, which skyrocketed as power plants and industrial consumers scrambled to secure additional supply, benefited other energy interests. Macquarie Group, an investment bank that is the second-biggest physical gas supplier in the U.S., reported a windfall of $210 million from the swing in gas and electricity prices. The company also owns Griddy, a residential energy utility that has billed customers as much as $16,752 and $8,000 in recent days.

There was another “upside” to the Texas storm, McCrea noted during the call. “Just over the last four or five days,” he added, “the number one thing that everybody is recognizing, I’ve already said, and we all know on this call, how important fossil fuels are for this country, in this world.”

The crisis has indeed sparked a debate over the role of fossil fuels, with some prominent Republicans taking to the air to disingenuously blame only wind and solar energy rather than the failure of the grid as a whole. Texas Gov. Greg Abbott appeared on Fox News to falsely claim that the storm showed the Green New Deal — a slogan for a package of renewable energy policies favored by some in Congress that has not been debated or implemented — “would be a deadly deal for the United States of America.”

“Last week in Texas,” said Perry, “as people were losing their power, thank God we had fossil fuels in this state, because if all we had had was the AOC Green New Deal plan, wind and solar, we would have had a massive disaster on our hands.”

Despite the intense focus on the failures of some wind turbines during the storm, many point to a diffuse set of causes for the blackouts, including the deregulated design of the Texas energy grid. Texas is the only state in the nation that is not connected to other states to import energy in times of crisis and does not require any “capacity market” to compel power plants to produce additional standby energy during the winter. Many of the critical power plants that failed last week were reliant on fossil fuels such as natural gas.

A follow-up story on the Fox News website, published after Perry’s appearance, noted that “natural gas, coal and nuclear energy systems were responsible for nearly twice as many outages as frozen wind turbines and solar panels combined.”

Many of the power outages were due to a lack of weatherization at power plants and pipelines, upgrades that were fiercely resisted by energy companies in Texas. Following a winter storm in 2011, which similarly caused rolling blackouts, both state and federal energy regulators recommended extensive work to prepare the electricity infrastructure in the state for severe winter weather events. The warnings produced little change.

In 2014, the Public Utility Commission of Texas also proposed rules to require power plants to identify and address “weather design limits.” The proposal was opposed by leading power generation companies, including the Texas subsidiary of utility and energy giant Sempra Energy. The rules were then weakened to allow power plants to only address previously known problems, not identify any new potential weaknesses.

Another fact that went unmentioned during the Hannity segment was his guest’s personal financial stake in the debate. Perry, following his resignation as secretary of energy in the Trump administration, rejoined the board of Energy Transfer last year. The part-time position provides stock and cash awards of $174,997 a year, according to a new filing to the Securities and Exchange Commission.

This story has been updated to include a response from Comstock Resources.