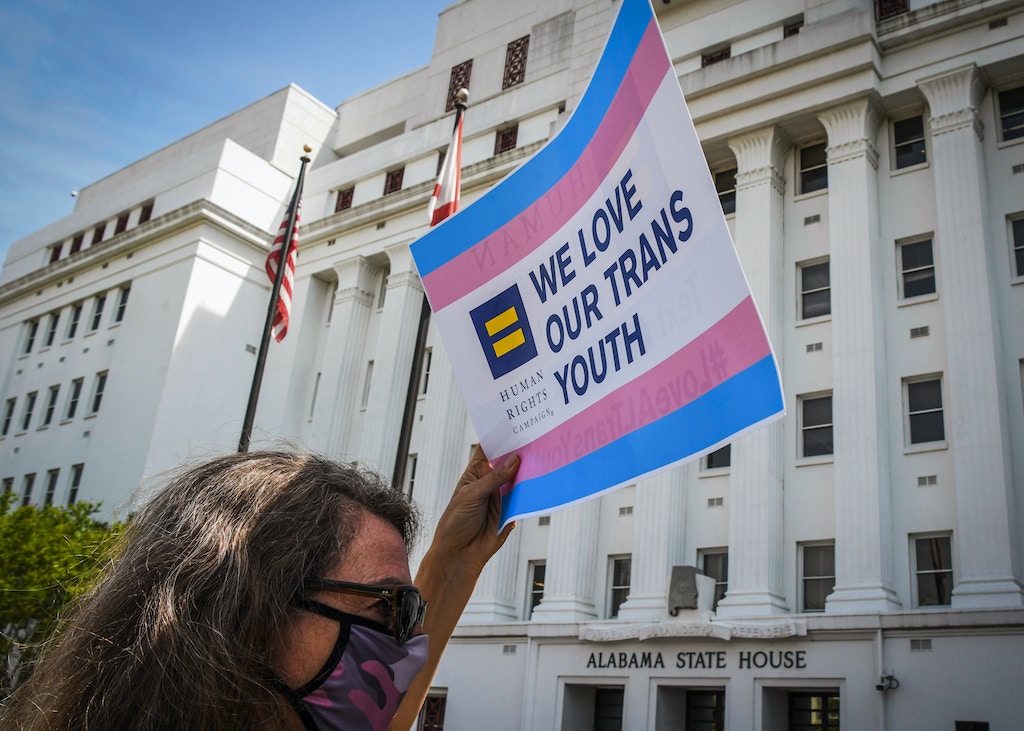 Jodi Womack holds a sign that reads “We Love Our Trans Youth” during a rally at the Alabama State House to draw attention to anti-transgender legislation in Montgomery, Ala., on March 30, 2021.

Conservatives are obsessed with nonexisting children. This is nothing new: The paranoia is a central tenet of the modern American right. They worry about a zygote or embryo as if it were already a child (it is not). Then there was the whole generation of nonexistent children whose brains turned to fried eggs on marijuana. The murderous Satanic children. The Black “superpredator” children were a powerful racist fantasy.

More recently, the right has taken up the cause of another sort of nonexisting child: the children who are coerced into becoming trans; the so-called biological male children who pretend to be girls to play sports, and the other little girls on the team who are devastated by this; the children getting gender-affirming surgery or other irreversible medical interventions; and several variants on these nonexisting kids.

None of these categories of children actually exist, even if a number of children are wrongly described in these terms by conservatives and their anti-trans allies. People who don’t exist are far better suited to cynical political manipulation and prurient psychological projection than are living, breathing children with lives that should get to richly matter. Great harm has been done, and continues to be done, to existing children in the name of the figurative child — who is almost always white, cis, and under threat.

“This year, over 100 bills have been introduced across the country targeting trans people, mostly youth. In my years of doing this work, I have never seen anything like this.”

The current, unprecedented attacks on trans children in statehouses across the country are existential in scope: Very-much-existing children are being sacrificed to the white supremacist, patriarchal Republican agenda and its mythic child in need of protection.

“This year, over 100 bills have been introduced across the country targeting trans people, mostly youth, and they have moved aggressively through state legislatures and been debated with such vitriol and cruelty,” American Civil Liberties Union attorney and trans rights activist Chase Strangio told me. “In my years of doing this work, I have never seen anything like this.”

Just this week, the Arkansas state legislature passed one of the most extreme anti-trans bills in history. It would prohibit health care professionals from providing or even referring trans youth for medically necessary health care. It would bar any state funds for gender-affirming health care for trans people under 18, and it would allow private insurers to refuse to cover gender-affirming care for people of any age. Doctors who provide medically necessary care to trans youth would risk losing their licenses and be subject to lawsuits by individuals and the state.

Unless vetoed by Gov. Asa Hutchinson, this systematic effort to decimate trans life will become law. Similar legislation is gaining ground in Alabama and Tennessee, among numerous other states.

These bills aren’t some organic manifestation of popular political will. Recent polls find the majority of voters, even registered Republicans, think trans people should be able to live openly and with health care access. The vast majority of medical experts support access to gender-affirming health care for children, including the American Academy of Pediatrics and the American Academy of Family Medicine.

This wave of anti-trans bills is based on model legislation written by extraordinarily well-funded right-wing think tanks, like the Heritage Foundation; the Eagle Forum, which was founded by religious right icon Phyllis Schlafly; and the Alliance Defending Freedom, which is a designated hate group according to the Southern Poverty Law Center.

The legislative attacks, and the ferocity with which Republicans are pushing for them, work to produce a convenient target for moral panic and violent othering — the bread and butter of any fascistic, right-wing identity formation. “The GOP is capitalizing on the lack of solidarity with and support for trans people to generate widespread fear and outrage about our very existence,” said Strangio. “Harkening back to the moral panic of Anita Bryant and Phyllis Schafly, this moment is part of a long tradition of consolidating fear and disgust of the unknown to leverage political power in the service of maintaining norms of white supremacy and patriarchy.”

The American right, with all its funding, has been extremely effective at weaponizing an idea that all too many liberals, and even alleged leftists, have helped to prop up: that trans people, and particularly trans children are somehow new, just because they are more visible in recent years. “This false idea that children weren’t trans until about 10 years ago has been an alibi for a lot of this legislation,” said Jules Gill-Peterson, author of “Histories of the Transgender Child” and an associate professor at the University of Pittsburgh. “Greater cultural visibility is mistaken to mean that trans people didn’t exist before this visibility, which creates an opening for a backlash against a ‘cultural fad,’ focused on a very vulnerable target — trans children.”

The fact that we have not always had the same terms, or medicalized framing, of transness that we do today does not make trans children and adults a new feature of an otherwise gender-conforming world. And treating trans lives as a bourgeois trend or a distraction from anti-capitalist struggle misunderstands the reality of most trans people’s lives. This plays into the hands of the reactionary right, which is, at base, seeking to expand the state’s authoritarian control over life, while withdrawing provisions for living, like health care and housing.

“We need to reject the terms on which this debate is happening,” Gill-Peterson said. When the right wants to conjure a moral panic and a frankly lurid obsession with children’s bodies, we find ourselves having to defend crucial medical care, like puberty blockers, that most trans children, who are not wealthy, do not have access to anyway. Gill-Peterson said, “Of course, trans children should be able to access puberty blockers, but we also need to expand our focus on the level of value: This should not be about reluctantly accepting that trans children exist and reluctantly allowing them to exist. We want trans children in the world. We welcome them and welcome their trans childhood.”

As Gill-Peterson noted, when we are “boxed in” to a reactionary discourse, we are also distracted from fighting for the economic redistribution, robust health care provisions, and opposing the carceral state — all issues that profoundly matter to trans people’s survival and flourishing.

Instead, in the media and in statehouses, as well as in Congress, trans children are being forced to argue for their existence in front of cold and calculating political bodies. “Why should some guy who has never met me, why should he get to tell me what I can and can’t do?” 17-year-old Cyrus Hall, a trans boy, told NPR as his state of Alabama advances bills that would outlaw his hormone treatment. “Why does he get to decide what is right for people who just want to be happy?”

There is a fight against anti-trans bills in state legislatures. Local trans-led organizations are calling on lawmakers to reject the GOP’s cynical and cruel operations; these organizers deserve our strongest support, as do the mutual aid groups and collectives that provide shelter, food, medical, and legal support for trans children and adults. “We will fight these bills in court should they become law,” Strangio told me. “But at that point some serious damage may already be done with clinics shutting down and kids losing their chance to participate in sports alongside their peers.”

Efforts to legislate trans children out of existence should not be seen as some discrete outgrowth of a distracting “culture war”; anyone who claims to care about the state’s monopoly on violence, health care austerity, and determinations over which lives get to matter should be fighting for trans children and adults right now.