Three cases before the Supreme Court threaten to gut sex discrimination laws. Already imperiled transgender and queer workers could be the hardest hit. 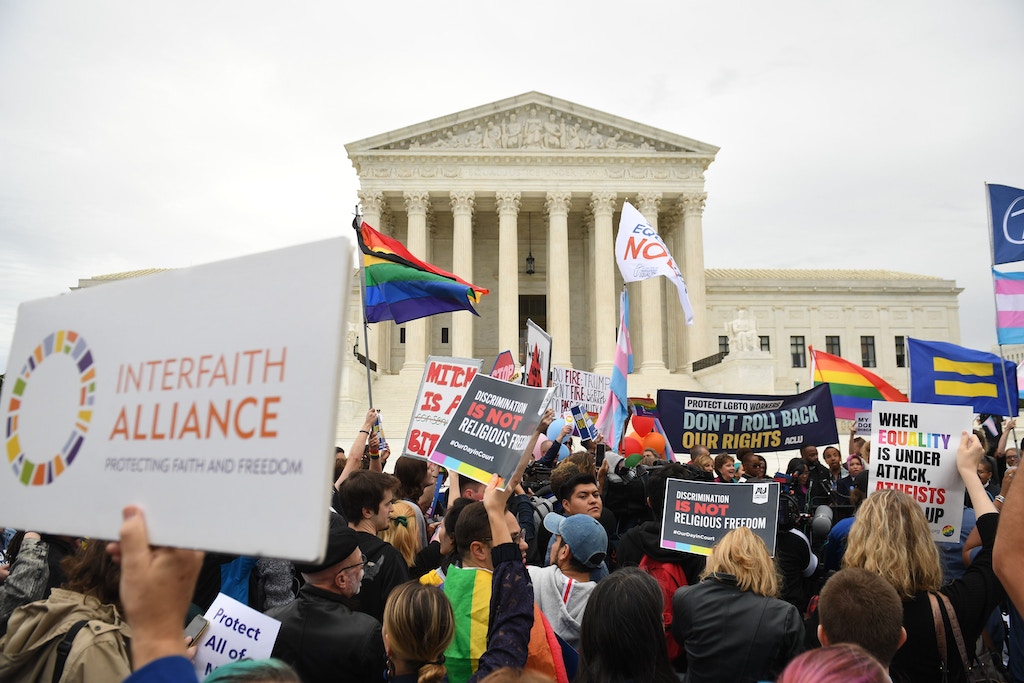 Demonstrators rally for LGBTQ rights outside the U.S. Supreme Court in Washington, D.C., on Oct. 8, 2019, as the Court holds oral arguments in three cases dealing with workplace discrimination based on sexual orientation.

Three historic cases concerning the protection of LGBTQ workers went before the Supreme Court for oral arguments on Tuesday. In each, the government is attempting to fundamentally roll back sex discrimination law as it applies to gay, lesbian, bisexual, queer, trans, and nonbinary people — but potentially to all workers who might pose a challenge to traditional gender conformity. Yet, as these cases progress, it should be impossible to think of them apart from the threats of harm already facing trans people in this country.

Transgender individuals currently experience unemployment at a rate three times higher than that of the cisgender population; for trans people of color, the rate is four times higher. According to a 2015 survey by the National Center for Transgender Equality, 30 percent of transgender people reported being fired, denied a promotion, or experiencing mistreatment in the workplace due to their gender identity in the previous 12 months alone. Thirty percent of transgender people reported being homeless at some point in their lives.

The court’s makeup in these cases, as in so many others, bodes ill for justice — despite decades-old legal precedents standing in favor of the plaintiffs.

The Supreme Court cases, for which oral arguments began Tuesday morning, all concern whether Title VII, a key provision in the 1964 Civil Rights Act, which bars discrimination in the workplace because of “sex,” covers LGBTQ individuals. One case involves 58-year-old Aimee Stephens, who was fired from her job at a suburban Detroit funeral home after coming out as a trans woman to her employer. In another landmark case, justices heard appeals in separate lawsuits filed by gay men who were fired after their sexual orientation became known to their employers.

During Tuesday’s oral arguments, conservative Justice Neil Gorsuch and Chief Justice John Roberts already vocalized the sort of reactionary sentiments that are likely to inform their thinking in these cases, which will likely not be decided until next summer. Gorsuch, while noting that there are strong arguments favoring the LGBT workers, wondered whether the justices should take into account “the massive social upheaval” that might follow a ruling in their favor. Meanwhile, Roberts raised concerns about employers with religious objections. The court’s makeup in these cases, as in so many others, bodes ill for justice — despite decades-old legal precedents standing in favor of the plaintiffs.

The Title VII statute does not explicitly name discrimination over gender identity and sexual orientation — a legislative issue unlikely to change under the Republican-controlled Senate. Yet LBGTQ individuals have been able to rely on Title VII protections in the courts for over two decades. “Going back to 2000, federal appeals courts have ruled that anti-trans discrimination is a form of sex discrimination that violates federal law, providing a remedy for trans workers fired for who they are,” wrote James Esseks, director of the ACLU Lesbian Gay Bisexual Transgender & HIV Project, in a statement. “These cases will affect more people than the Supreme Court’s decision about the freedom to marry, and they potentially implicate a broader range of contexts in which LGBTQ people may face harm, if the Court green-lights discrimination.”

By any reasonable measure, LGBTQ discrimination is discrimination based on sex. “It’s hard to see how firing someone for being LGBTQ doesn’t involve the person’s sex. You can’t even describe being trans or gay without talking about the individuals’ sex,” wrote Esseks. His colleague, ACLU attorney Chase Strangio, who is on the legal team representing Stephens, echoed this point on Chris Hayes’s podcast. “It’s so intuitive,” he said, to situate trans protections in the legal framework of sex discrimination because “you can’t actually describe a trans-ness without thinking about sex as a category.”

It’s undeniable that firing someone because they are trans or queer is a decision made based on the basis of sex.

Whether one understands the categorizations of “sex” as entrenched social constructs or conservatively believes they are essential, biologically determined differences, it is undeniable that firing someone because they are trans or queer is a decision made based on the basis of sex and assumptions made about the way individuals belonging to a presumed given sex are expected to live and behave.

This idea of discrimination based on “sex stereotypes” falling under Title VII is hardly new and forms a considerable basis of the plaintiffs’ arguments in the Supreme Court this week. In 1989, the court agreed, as a plurality, that Title VII also protected a cisgender woman who had been fired from her job as an accountant at Price Waterhouse because she didn’t dress and act as women were expected to. The justices jointly wrote that the point of Title VII law was “to strike at the entire spectrum of disparate treatment of men and women resulting from sex stereotypes.” The ways these individuals whose sexual orientation does not align with “sex stereotypes” — that is, straightness — is immediately obvious. To be trans is to definitionally challenge the ur-”sex stereotype” — namely, that we are and must remain the sex that we are assigned at birth.

It would be difficult for Trump’s Justice Department to conjure an argument whereby anti-gay and trans discrimination could be found to not relate to sex stereotyping. Which is why the tack the government is taking in the current Supreme Court cases seeks to dismantle the precedent against sex stereotyping discrimination altogether. As the ACLU’s Strangio explained it, the Justice Department’s “argument in the lower court and what their brief suggest to me is that they’re advocating for a world in which employers can fire a woman for being gender-nonconforming as long as they fire a man for being gender-nonconforming as well.” That is, the government’s response to claims of specific discrimination is to make discrimination itself more expansive.

If the court rules that discrimination on the basis of sex stereotypes is legal, anyone who doesn’t conform to an employer’s view of stereotypical femininity or masculinity could be at risk. But it should not be a condition for caring about LGBTQ workers that cisgender and straight workers could also face discrimination. To understand that the government is fighting for employers to erase and decimate the means of survival for queer, trans, and nonbinary people is enough for us to support the plaintiffs in these cases, and the communities they represent who are already imperiled.