Despite pledging to recuse herself from contracts involving her partner “as necessary,” the council member-turned-House-candidate approved $17 million to Perk. 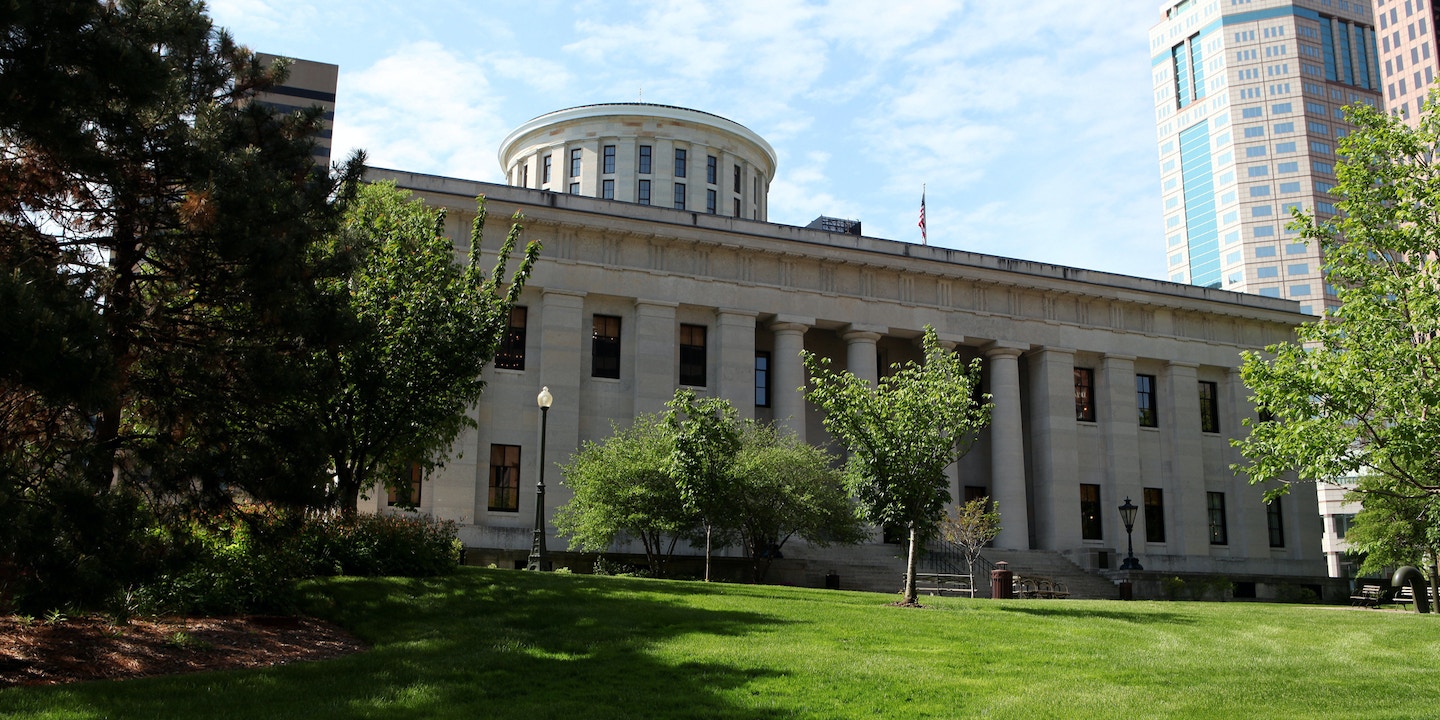 When Shontel Brown was running for her seat on Cuyahoga County Council in 2014, she responded to questions about her links to the family of a major contractor by promising to “recuse herself from county contracts with ties to Mark Perkins as necessary.” Perkins, Brown’s partner, has longstanding ties to the Cleveland-based general contractor Perk.

On February 28, 2017, Brown deemed recusal unnecessary and voted with her colleagues to give a nearly $7 million contract to Perk. Ten weeks later, one of the firm’s owners helped organize a fundraiser that bankrolled a significant portion of her reelection campaign, making an in-kind donation of $2,000 at a fundraiser for Brown that netted her over $7,000, a significant sum in the low-budget world of Cleveland-area council races. In total, she has approved more than $17 million to Perk and has received $13,000 in campaign donations from the Perkins family and Perk’s current owners, the Cifani family.

Brown is now running in a competitive House primary against Nina Turner to replace Housing and Urban Development Secretary Marcia Fudge in Ohio’s 11th District. Turner, a former Ohio state senator, was a leading surrogate for Bernie Sanders in his two presidential runs. While much of the establishment has lined up behind Brown, who is the head of the Cuyahoga County Democratic Party, Turner has a bevy of local establishment endorsements as well, including from influential moderate Cleveland Mayor Frank Jackson. Turner has significantly outraised Brown, raising $1.6 million in the first quarter of 2021 to Brown’s $680,000, though both candidates’ numbers are high for this early in a congressional primary, which will be held August 3. Besides the $7 million contract in 2017, Brown also voted on three other occasions to approve Cuyahoga city contracts for Perk, totaling an additional $10 million between 2015 and 2019. And in August 2020, she voted in favor of contracts of $1.875 million to two firms, one headed by Mark Perkins’s sister and a second whose former vice president is another family member of Perkins. Perk and McTech, a company owned by Mark Perkins, are frequent and longtime business associates.

Perk was co-founded by Charles Perkins, the uncle of Brown’s longtime partner Mark. Perk’s current owners, the Cifani family, have been generous supporters of her campaigns for office. Brown received campaign contributions from the Perkins and Cifani families in her low-budget campaigns for county council and, before that, for city council in the Cleveland suburb of Warrensville Heights, where both she and her mentor, Marcia Fudge, got their political starts.

In response to repeated requests for comment from The Intercept, a spokesperson for Brown’s campaign said that they have “no comment at this time.”

It is not clear if Mark Perkins and Brown are still engaged, as Brown told Cleveland.com in 2014, but people searches show that they have shared addresses, and political contribution records show that they live in the same ZIP code as of 2020. Sources in Cleveland with knowledge of their relationship said that they are still together but not married.

It is clear, in any case, that Brown was aware of a risk of potential ethical concerns when she took office.

The business relationship between the Perkins and the Cifani families dates back to 1993, when Perk was formed with Charles Perkins, Mark’s uncle. Prior to that, Charles Perkins had launched his career working with various Perkins family companies.

Mark Perkins purchased McTech in the late ’90s from the Cifanis and, under Perkins, McTech has frequently worked with Perk. Other companies in the Perkins-Cifani orbit are Brigadier Construction and TMG Services. TMG shares a headquarters with Perk. Brigadier, TMG, and McTech have also been awarded multiple subcontracts by Perk. Mark Perkins’s family member Frederick D. Perkins was formerly vice president at Brigadier Construction, while Mark Perkins’s sister Nicole is CEO of TMG. Those two companies were among a selection of contractors who were greenlighted to receive as much as $1.875 million each for on-call “COVID-19 Emergency Building Modifications” from Cuyahoga County in August 2020, in a resolution that Brown voted for. TMG has received $1.4 million for its work so far. Brigadier has not yet performed any work, though the contract term runs until August 2021.

The close relationship between the Cifani and Perkins families led to questions from the Cleveland Plain Dealer about whether the Perkins family, who are Black, have control over TMG or McTech, or whether they simply headline the paperwork for minority contractor certification. Minority contractor rules in Ohio require that people of color not only own but also control and manage the company that receives certification. Similar questions have arisen recently in Ohio’s burgeoning medical marijuana market, where a proposed dispensary has not opened due to an investigation into whether or not the controlling owner is actually from a disadvantaged group as the company claims.

Procurement officials had questions about the relationships between the Cifani and Perkins families early on. In 1993, a lawyer for Perk told officials, “The relationship between these men should not be construed as merely an opportunity for the Cifani brothers to control Perk Inc. and to gain a monetary advantage.” However, in an extensive investigation in 2008 by the Cleveland Plain Dealer, now-Chicago Mayor Lori Lightfoot, at the time an expert on minority contractor programs, said, “If I were looking at a company that was formed under these circumstances where the principals had no prior experience in running this kind of a company, I’d have really serious concerns about whether or not they controlled it,” referring to Mark Perkins’s company McTech.

Controversy triggered by the Plain Dealer investigation resulted in a 2012 contract to Brigadier being delayed, but it was ultimately granted to the firm. Today, McTech, Brigadier, and TMG are certified minority contractors. In Cuyahoga County, less than 1 percent of recent contracts have been awarded to minority-owned businesses, a 2020 disparity study found, and increasing diversity in procurement was one of several recommendations by a Citizens’ Advisory Council on Equity, created after the county declared racism a public health crisis last year.

Shontel Brown announced her run for Congress in early December. By the end of the month, at least one person from the Cifani-Perkins nexus had donated $2,500 to her fledgling campaign: Robert DiGeronimo of Independence Excavating, a major player in Cleveland real estate. Independence had done subcontracting work for Mark Perkins’s parents’ company, Choice Construction, when Choice was a prime minority contractor in the ’90s. That company went out of business as Perkins’s parents were prosecuted for tax issues in 2003. Shontel Brown voted in favor of a $9 million contract to Independence Excavating in May 2019.

Brown has served on Cuyahoga County Council since 2015 but is more prominent in Northeast Ohio for her role as chair of the Cuyahoga County Democratic Party. She is aligned with the old guard of the Ohio party, namely Bill Mason, the former county prosecutor, and Dave Wondolowski, the head of the Cleveland Building Trades unions that have near universally endorsed Brown. There, too, she has faced recent charges of conflict of interest. In a strongly worded February editorial, the Cleveland Plain Dealer called on Brown to resign immediately from her party post, saying that she was improperly wielding her influence to secure endorsements in the upcoming House primary.

“By controlling the party’s apparatus, Brown and her leadership team have the biggest say in which candidates get the backing, the money, the time and the endorsements of local labor and elected officials,” the editorial said. “Instead of stepping down, Brown has been vigorously amassing support and endorsements from individuals within the party apparatus — giving her an added advantage every day she continues in the party position.”

Correction: April 16, 2021
In a previous version of this article, Matthew Cunningham-Cook reported that Frederick Perkins is currently vice president of Brigadier, and that Brigadier shares an address with Perk. Frederick Perkins was formerly vice president of Brigadier, and Brigadier no longer shares an address with Perk. The article also described a decision by the Department of Veteran Affairs to remove Brigadier from its small business program; that decision was reversed.

Correction: April 28, 2021
The article has been updated to correct Matthew Cunningham-Cook’s reporting on the business relationship between Perk and McTech; the companies are longtime business associates, but the relationship is not exclusively one of subcontracting. In addition, prior to 1993, Charles Perkins worked for companies run by the Perkins family, not the Cifani family.