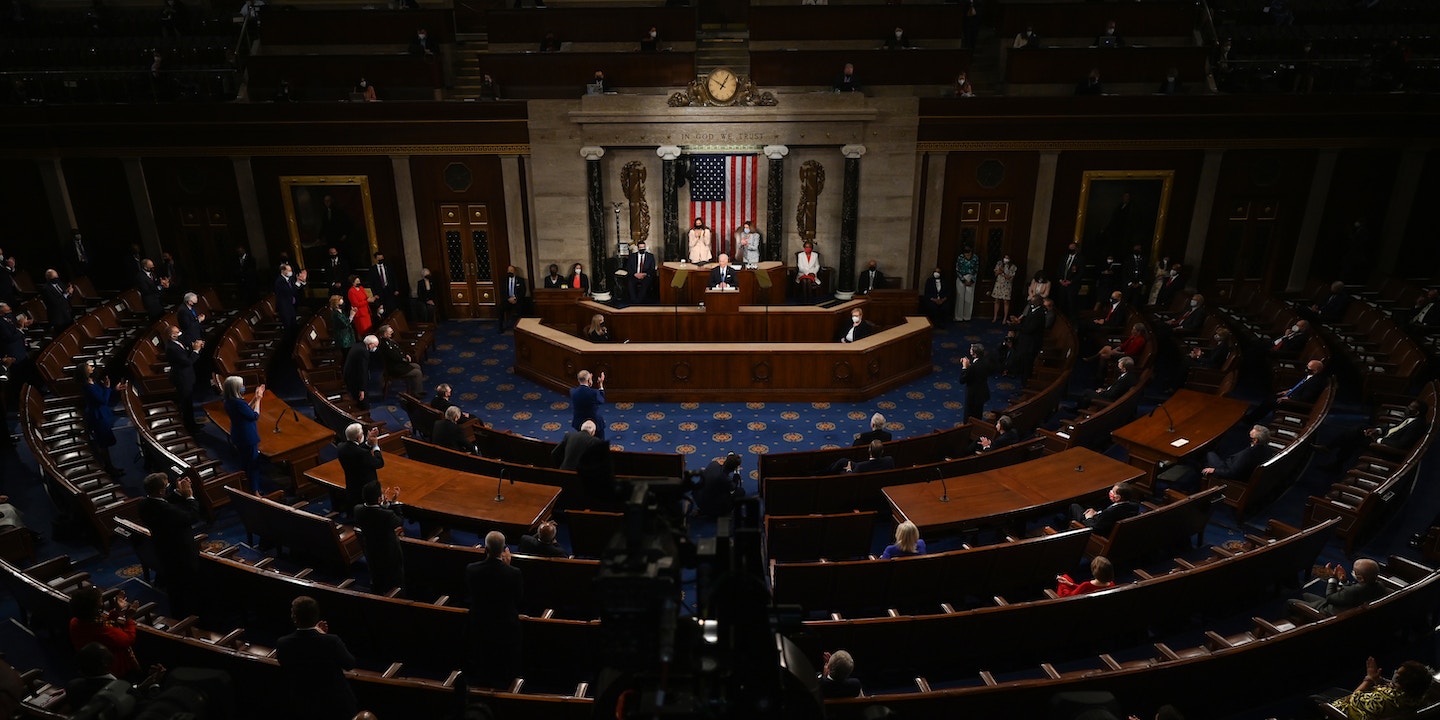 Even as President Joe Biden called for Congress during his joint address last week to pass labor reform legislation, a slate of gig companies has spent over $1 million lobbying Congress to influence the PRO Act and other related issues in 2021 alone, according to newly released lobbying disclosures.

Ride-hailing companies Uber and Lyft and delivery apps DoorDash and Instacart spent at least $1,190,000 on 32 lobbyists to persuade members of Congress on the PRO Act, first quarter disclosure reports show. The bill, which the House of Representatives passed in early March, would allow many gig workers to unionize and make it harder for companies to union-bust, among other changes.

Uber alone spent $540,000 in the first quarter of 2021 lobbying on “issues related to the future of work and the on-demand economy, possible anti-competitive activities that could limit consumers access to app-based technologies,” the PRO Act, and other related labor issues.

The PRO Act would make the most pivotal changes to labor law since the 1970s. In addition to giving many gig workers the right to unionize, it would grant employees whistleblower protections and prohibit companies from retaliating against participants in strikes and other union-related activities. A 2019 report from Gallup commissioned by Intuit estimated that 17 percent of U.S. adults engaged in self-employment.

“[There are] good guys and women on Wall Street, but Wall Street didn’t build this country, the middle class built the country — and unions built the middle class,” Biden said during his joint address. “So that’s why I’m calling on Congress to pass Protect the Right to Organize Act, the PRO Act, and send it to my desk, so we can support the right to unionize.”

These reforms threaten the profits of gig companies, which rely on a large and fluid group of independent contractors. At this point, said Catherine Fisk, a labor law professor at the University of California, Berkeley, workers at gig companies aren’t entitled to rights that employees qualify for under other federal and state laws, such as unemployment insurance, worker’s compensation, or employer health benefits.

“The one right that the PRO Act would change is whether independent contractors have the right to form a union and bargain collectively.”

Annual financial reports to the Securities and Exchange Commission filed by gig companies for 2020 describe how changing the legal definition of employees and allowing unionizing pose problems for the companies.

Uber views changes similar to what could result from successful passage of the PRO Act as a business risk, writing in its financial filing, “Reclassification of Drivers as employees, workers or quasi-employees where those statuses exist, could lead to groups of Drivers becoming represented by labor unions and similar organizations.

“If a significant number of Drivers were to become unionized and collective bargaining agreement terms were to deviate significantly from our business model, our business, financial condition, operating results and cash flows could be materially adversely affected,” Uber added. “In addition, a labor dispute involving Drivers may harm our reputation, disrupt our operations and reduce our net revenues, and the resolution of labor disputes may increase our costs.”

Uber did not respond to requests for comment. DoorDash, Lyft, and Instacart referred The Intercept to an April 12 statement calling the Senate to reject the PRO Act from the App-Based Work Alliance, which describes itself as a coalition of gig companies focused on preserving the independent contractor status of their workers. The coalition includes Uber, Lyft, DoorDash, Instacart, and Postmates, according to its website. 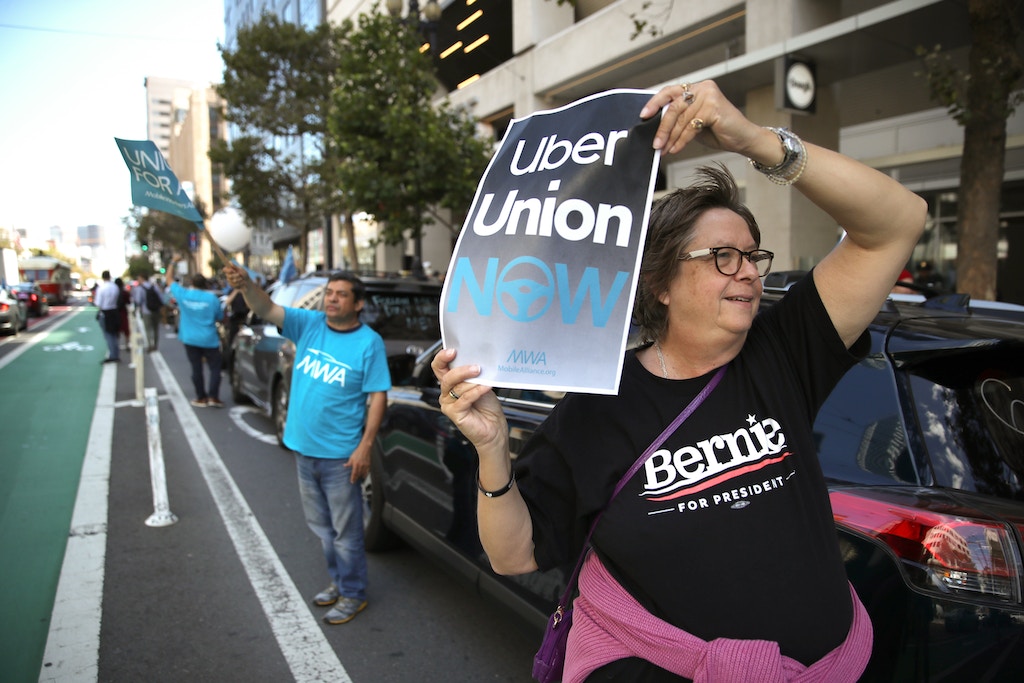 Rideshare drivers hold signs during a protest outside of Uber headquarters in San Francisco, Calif., on August 27, 2019.

“The App-Based Work Alliance opposes the PRO Act because we stand with workers who overwhelmingly want to remain independent contractors. The ABC test provision in the PRO Act would end flexible and independent earning opportunities for millions of app-based workers overnight and wreak havoc on the economy by forcing these workers into an employment model,” it read in part.

The ABC test, said Fisk, “presumes any worker is an employee unless the hiring entity can prove it exercises no control over that worker, the worker performs services unrelated to the entity’s normal business, and the worker is engaged in an independent business providing the same services to others.”

In a statement to The Intercept, DoorDash added that it’s committed to flexible scheduling for contractors, who the company said work an average of four hours per week. “We will continue working with the Biden Administration and members across the political spectrum to help craft modern policies that preserve worker flexibility and create a new portable, proportional, and flexible benefits framework.”

One California resident who began driving for Lyft in 2017 said that the legislation would allow drivers to push for better pay after she said her wages fell following an increase in fees.

“Over the years, as the demands increased with lower pay, I realized this is not a godsend, this is more of a nightmare.”

“Over the years, as the demands increased with lower pay, I realized this is not a godsend, this is more of a nightmare,” said Cherri Murphy, who now organizes with the activist group Gig Workers Rising. Murphy stopped driving for Lyft last year, near the beginning of the Covid-19 pandemic. “The number of rides continued to increase, but the pay decreased. There were different things they were taking out while they were making more demands.”

A similar fight took place in California in 2020, after the state Legislature passed a bill that required employers to prove that independent contractors operate outside their control using the ABC test. The bill, which would have extended employee classification to many gig workers, prompted app-based gig companies to push hard for Proposition 22, which exempted ride-hailing and food delivery apps from the state statute. Uber, Lyft, DoorDash, Instacart, and other gig companies spent over $200 million campaigning for the exemption — the most spent on any ballot measure in California history — which later passed.

“There are a lot of states that have tried to extend various legal protections to app-based drivers, such as the right to collect unemployment benefits. Uber and Lyft have resisted that in every state that’s tried it,” said Fisk, the labor law professor at Berkeley.

Elizabeth Tandy Shermer, an associate professor of history at Loyola University Chicago, said that the PRO Act is reflective of the history of pro-labor legislation going back about 90 years. During that period, at the local level, companies “weakened on-the-job protections — insisting that a company staying or leaving hinged on such rules.” At the state and federal levels, they lobbied to prevent progressive labor legislation, while the Supreme Court and appointees to the National Labor Relations Board made “rulings that benefit employers.”

Following Biden’s call to send the bill to his desk during his joint address, Secretary of Labor Marty Walsh told Reuters last Thursday that he thought gig workers should be classified as employees, precisely what the gig companies are trying to avoid.

The House passed the PRO Act on March 9, and the Senate received and referred the bill to the Committee on Health, Education, Labor and Pensions on March 11. Since a version was introduced in February, 47 senators have sponsored the bill — all Democrats and independents. Democratic Sens. Kyrsten Sinema and Mark Kelly from Arizona and Mark Warner from Virginia have so far held out.