A new report sheds light on how, despite orders from the Biden administration to narrow its immigration enforcement, ICE is still casting a wide net. 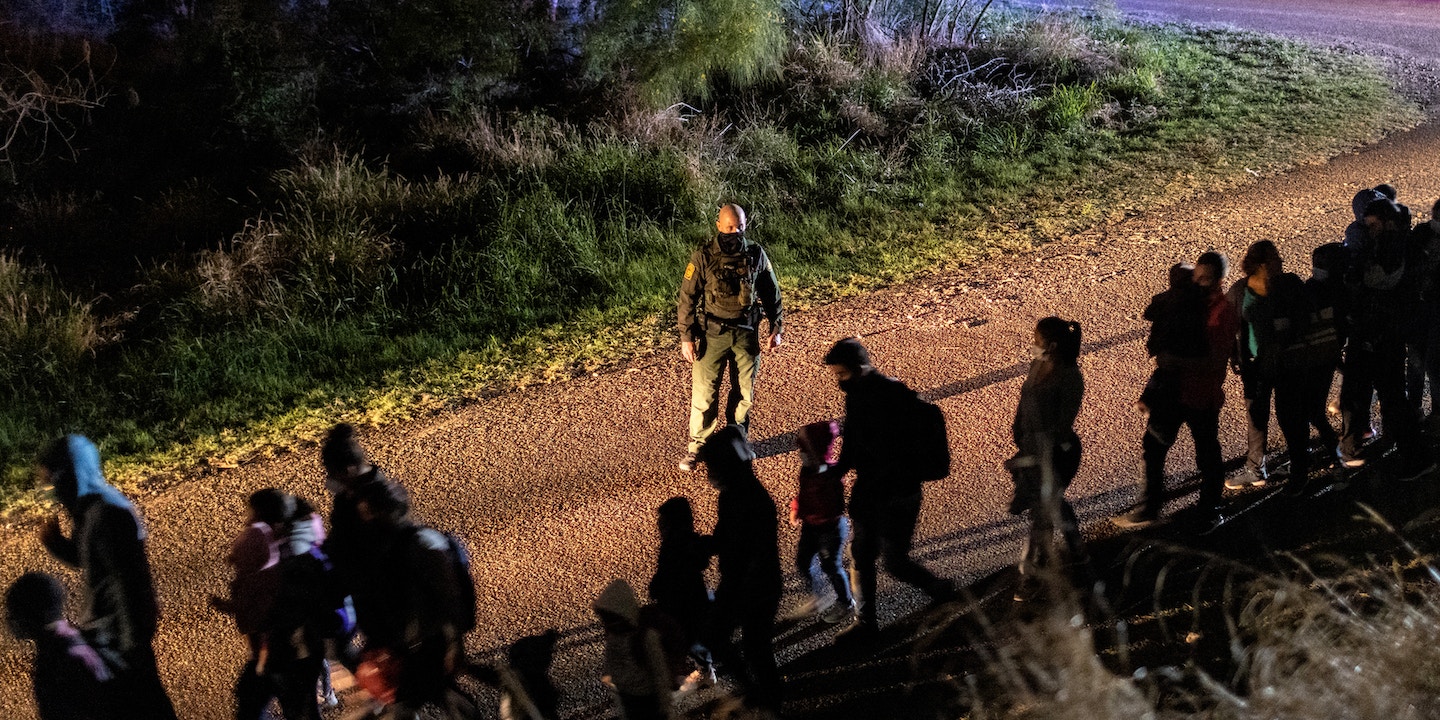 On the first day of Joe Biden’s presidency, the acting secretary of the Department of Homeland Security issued a memo to change immigration enforcement priorities and limit the number of people U.S. Immigration and Customs Enforcement would target and detain. The same day, Biden issued an executive order declaring a partial moratorium on deportations. Both the new immigration enforcement priorities, which have been sporadically upheld by ICE, and the deportation moratorium, which was swiftly blocked after Texas sued the federal government, have become examples of the new administration’s promises falling short.

Over the administration’s first 100 days, lofty campaign rhetoric and policies in line with a more progressive immigration agenda have met the deflating reality of agencies — both ICE and Customs and Border Protection — that are geared toward the indiscriminate targeting and deportation of noncitizens. Operating in the shadows of U.S. cities, the far reaches of the desert, and often overlooked border stations, ICE and CBP have acted in a manner out of accord with directives handed down by the executive branch.

“It is deeply concerning but not surprising that, under the Biden administration, ICE continues to flout the administration’s orders.”

“Since its inception, ICE has operated with impunity and without proper oversight,” said Christina Fialho, co-founder and executive director of Freedom for Immigrants, which recently released a new report about the administration’s priorities and ICE’s enforcement. “It is deeply concerning but not surprising that, under the Biden administration, ICE continues to flout the administration’s orders and the president has done little to rein in his agency.”

The Freedom for Immigrants report details how ICE has not been following its own policies, leaving people locked in detention centers where they are subject to abuse, miserable conditions, solitary confinement, and paltry protections from an epidemic that has disproportionately ravaged immigrant communities and detention centers.

Though the Biden administration bears ultimate responsibility for its immigration record, and advocates have raised issues with its policies, the continued detention by ICE of people outside the designated priorities is not for lack of directives from executive appointees.

On February 18, Acting ICE Director Tae Johnson issued a memo elaborating a January 20 executive order tasking federal immigration agencies with further review of enforcement priorities. The February order reiterated that ICE focus on arresting and detaining people who pose national security, border security, and public safety threats. It also authorized the release from custody of noncitizens who have deep family and community ties, medical needs, and available immigration relief as well as those who have shown evidence of rehabilitation.

When considering past crimes, according to the memo, “the seriousness and recency of such convictions” should be mitigating factors. At the same time, the February memo granted ICE agents broader leeway in arresting and detaining people who fall outside the priorities.

Taken together, the memos by executive appointees prioritize arresting people who had entered the country after November 20, 2020 — an attempt to discourage an ongoing increase in immigration that has been a public relations calamity for the new administration. Yet about 70 percent of the people surveyed in the Freedom for Immigrants report were detained before last November. Those individuals, the report notes, had been detained under the Trump administration, which “had expansive and all-encompassing priorities that placed a target on the backs of all immigrants.”

Immigration attorney Andrew Free said, “If ICE really cannot act responsively to the political will of the American voters, what is the state of the ‘Homeland’ whose security it supposedly protects?” An activist at a Rise and Resist demonstration calling for the dismantling of ICE and CBP holds a sign calling for abolition at the plaza outside the Staten Island Ferry in Manhattan, N.Y. on May 6, 2021.

Advocates for immigrants and critics of the U.S. immigration system have long pointed to disparities between executive branch mandates and enforcement agencies’ actions. César Cuauhtémoc García Hernández, author of “Migrating to Prison: America’s Obsession with Locking Up Immigrants,” explained that while the enforcement priorities announced in January and February are far from perfect, he was more worried about those directives ever making their way to the field offices. “ICE agents have been slow and reluctant to implement what they see as excessively lax enforcement priorities,” he said.

“I have won my case, rehabilitated, and despite my health conditions in a facility that has no mask mandate, ICE continues to place my life at risk.”

Karim Golding, whose case The Intercept previously reported on and who meets all of the standards for relief, according to the new priorities, has been in detention for nearly five years. Golding, a now 36-year-old native of Jamaica who has been in the U.S. since childhood, was initially incarcerated after committing a nonviolent crime in his early 20s. After serving his time, he was taken into ICE custody in 2016 and has been locked up ever since. Last May, the 2nd Circuit Court of Appeals granted him a stay of removal. Golding has been diagnosed with hypertension, asthma, depression, liver disease, and post-traumatic stress disorder and has tested positive for Covid-19 twice while in detention — all conditions that make him eligible for release.

Golding and his attorneys have made at least four different requests for release under the Biden administration, as well as two appeals of those denied requests. ICE has recognized that he is medically vulnerable but insists on keeping him in detention. Golding told The Intercept, “I have won my case, rehabilitated, and despite my health conditions in a facility that has no mask mandate, ICE continues to place my life at risk.”

Cristina Velez, a senior staff attorney at the National Immigration Project who represents Golding, told The Intercept, “I would say that ICE’s failure to consider Karim’s considerable evidence of rehabilitation and medical impairments goes against the spirit and the language of the Biden administration’s enforcement priorities.” García Hernández noted that ICE being slow or reluctant to release people, even sometimes after they’ve won their cases, has been “standard operating procedure for decades.”

Golding’s situation is far from unique. Lauren Major, managing attorney at the American Friends Service Committee in New Jersey, told The Intercept that at least four of the group’s clients have had requests to be released denied despite the fact that their criminal charges have been dismissed. Major also counts five other clients whose requests have been denied based on unproven pending criminal charges against them and two other clients whose requests were denied based on criminal convictions that are not “aggravated felonies” — a term that does not correlate to felony criminal convictions, or have any meaning in criminal punishment, and was invented for immigration purposes.

The guidelines issued to ICE, despite what seems to be a softened approach, uphold long-standing principles that over-criminalize and over-police minor infractions, relying on the concept of “aggravated felony” to continue sweeping up migrants who have been convicted of even minor, nonviolent crimes.

The catchall term “aggravated felony” was invented by Congress in 1988 as part of the Anti-Drug Abuse Act for prioritizing deportations. Two other laws, passed in 1996 under President Bill Clinton, significantly expanded the definition, subjecting even more people to deportation. The current definition of an “aggravated felony,” a term that clearly seems to imply violence or serious criminality, covers more than 30 types of offenses, including minor theft, filing false tax returns, or failing to appear in court.

As the Freedom for Immigrants report notes, “Since their inception, these laws were deeply steeped in racism which vilified Black people and contributed to the rise of mass incarceration of communities of color.” While Black immigrants today make up only 7.2 percent of the noncitizen population, they make up 20.3 percent of people in immigration detention on criminal grounds.

Amanda Díaz, who manages the National Detention Hotline at Freedom for Immigrants, told The Intercept, “The Biden-Harris administration has made a clear commitment to racial equity, but the immigration enforcement priorities have done the reverse. Instead of truly ensuring ‘public safety’ for all, these punitive categories have undermined the safety of Black and brown immigrants who have suffered at the hands of a racist criminal justice system.”

Despite ICE’s dubious focus on targeting “criminals,” less than half of the people who were surveyed in the report had been convicted of “aggravated felonies.”

Meanwhile, as border agents continue to immediately deport tens of thousands every month, the number of people in ICE detention, which has been decreasing for the past year, is beginning to creep back up, with nearly 17,000 people currently being held by ICE. At the same time, deportations have been going down, which manifests in prolonged detentions.

Granting authority to individual officers in an agency with a long-standing record of racist abuse may be courting failure. Jeremy Jong, a staff attorney with the advocacy group Al Otro Lado who also represents Golding, told The Intercept, “A just immigration system is one that allows redemption.”