Since the first two Palestinian intifadas, camera phones and social media have changed the landscape of global outrage. When Israeli troops stormed the Aqsa mosque compound last week during Ramadan prayers, much of the world vicariously experienced the raid as it took place. Raw video footage of soldiers storming through screaming crowds — with stun grenades exploding as congregants ran for safety — was transmitted globally at the speed of information.

The provocative attack on a site considered holy to billions of people triggered an almost immediate reaction, not just among international media and online, but at the diplomatic level as well. Within a day of the incident, U.S. lawmakers, European states, and even Arab governments that have good relations with Israel were publicly condemning the assault and demanding de-escalation. These actors were themselves reacting to the pressure coming, or expected, from their own populations, much of whom had livestreamed the events or seen clips of the social media videos.

“Ordinary Palestinians now have the ability to broadcast their stories without the filter of a media that is highly biased against them.”

Rather than reading relatively controlled textual accounts in the morning paper the next day, ordinary people the world over witnessed the violent scenes blow-by-blow. Images distributed on social media of several attempts by Israel to evict Palestinians from their homes in the historic Sheikh Jarrah neighborhood of Jerusalem had kicked off the tensions earlier in the week. On Monday,  videos of Israeli throngs at holy sites cheering the chaos while singing far-right anthems flew around the internet. Now, footage of violence in mixed Arab-Jewish cities across Israel is spreading, along with the aftermaths of Israeli air strikes in Gaza. The emotional impact of literally viewing these scenes as they happen cannot be underestimated.

“Due to technology, ordinary Palestinians now have the ability to broadcast their stories without the filter of a media that is highly biased against them,” said Yousef Munayyer, nonresident senior fellow at the Arab Center Washington DC, a nonpartisan research institute. “We are seeing this on many different platforms, including Instagram, Facebook, and TikTok, where Palestinians of the younger generation are sharing their voices and experiences with as many people as possible.”

The internet has so deeply enveloped all aspects of our culture that it’s hard to recall that we are still in the early phases of a digital revolution. Estimates hold that by mid-decade, around 75 percent of people on Earth will have a smartphone. Being able to capture high-resolution videos and instantaneously send them out to the world is placing a level of broadcasting power once monopolized by outlets like CNN in the pockets of almost everyone.

The political impact of this change has already helped reshape politics across the world and has become a critical variable during armed conflicts. The pure strength of weaponry was for so long alone as the prime determinant in conflicts, but now extraordinarily powerful states also have to worry about teenagers with 200-gram microcomputers — as Israel is seeing today.

“I think we have been seeing the importance of this for a number of years now,” said Munayyer. “The state of Israel, and states in general, now have a much harder time using traditional tools to control the narrative of events.” Mourners, some recording on their cellphones, attend the funeral of Palestinian father Saber and his son Muhammed Suleyman who were killed in Israeli airstrike on Gaza Strip, in Jabalia refugee camp in Gaza City, Gaza on May 11, 2021.

A sad reflection of the sheer length of the Israeli-Palestinian conflict is that it has continued over several information revolutions. When early waves of Jewish settlers began arriving in Mandatory Palestine in the late 19th century, people were still understanding the world through print media and telegrams, later giving way to newsreels. That frame of reference has since transformed several times over. Throughout the 20th century, as the conflict between Israelis and Palestinians escalated, scenes of shootings, bombings, and forced displacement were transmitted to the world first by newspapers, then radio stations, network television channels, and now, in perhaps the biggest revolution yet, instantaneously by participants themselves through unedited cellphone video.

In the Mideast conflict, Israel’s decadeslong occupation has been punctuated by two mass Palestinian uprisings, known as intifadas. The current tensions — over Sheikh Jarrah and Al Aqsa Mosque — are raising the specter of a third in which, for Palestinians, the implications of the new information environment cannot be overstated. The next major phase of the conflict may take place in the streets of Jerusalem and the Israeli-occupied Gaza Strip, but the narrative war between Israelis, Palestinians, and their respective global diasporas will be fought just as much in cyberspace.

For the Israelis, this narrative war is hugely important, not least because of the role of the U.S., its most important political and military supporter. The U.S., through military aid, pays for about a fifth of the Israeli defense budget and acts as a bulwark against international action, in the United Nations and other fora, aimed at Israel.

During the first and second intifadas, the Israel-Palestine conflict was depicted to a global audience largely from an Israeli perspective. Should a third uprising break out, raw footage like that broadcast during the raids on Al Aqsa Mosque are likely to trigger immediate reactions from the global public that are favorable to the Palestinians, as well as from American lawmakers who have grown bolder in their condemnation of Israeli actions.

The Mideast conflict had lately subsided as an international issue, but the wave of Israeli actions captured on social media stoked outrage and pushed it back into the headlines. “Many people had been thinking recently that the Israel-Palestine issue was falling off the agenda,” Munayyer said, “but now we are seeing the scale of mobilization throughout the land and globally.” 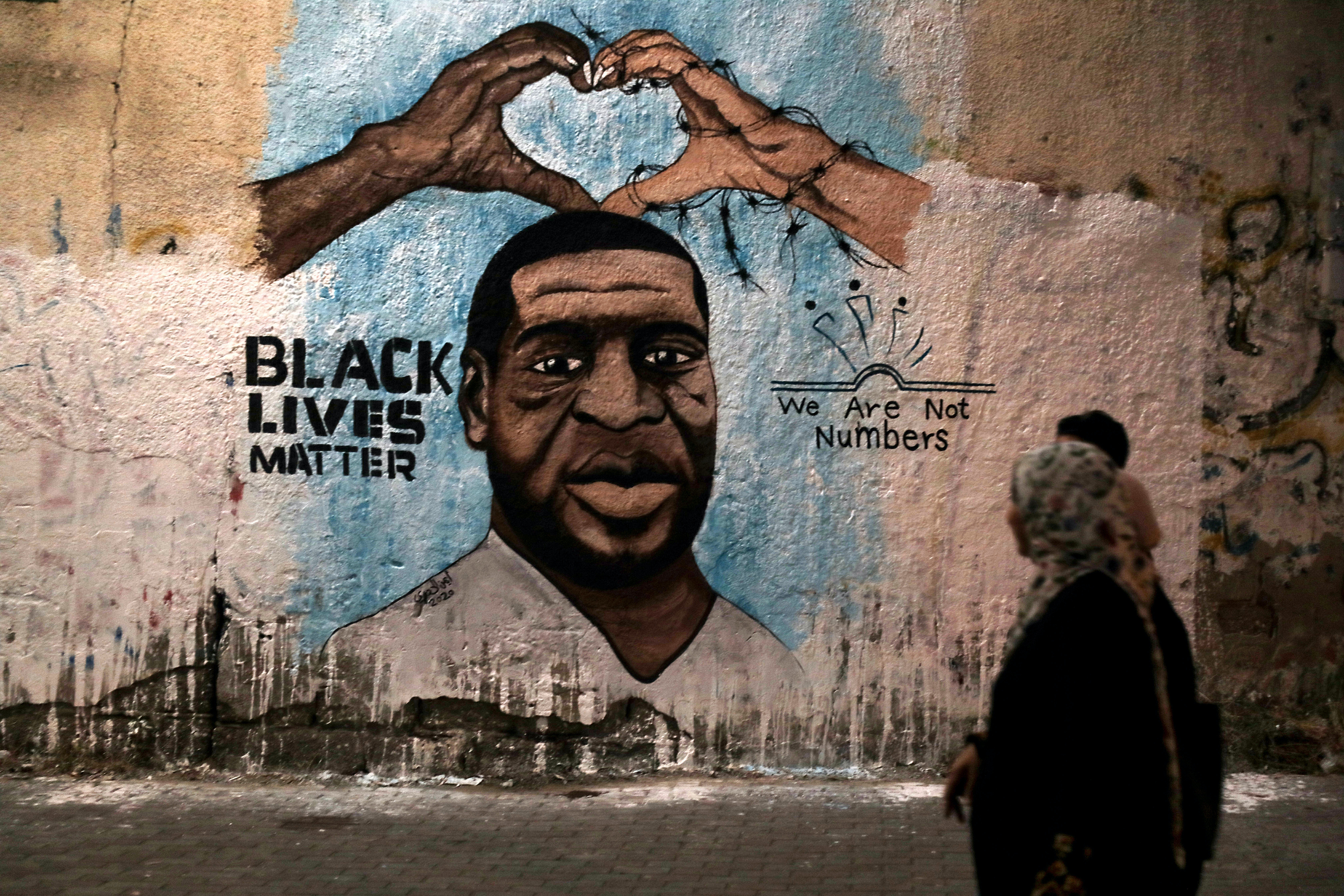 Palestinians walk past a mural of George Floyd, a Black man murdered by police in the U.S., in Gaza City, on, June 16, 2020.

The ability of cameraphones and social media to push an issue to the fore has been witnessed beyond Israel-Palestine. Social media has helped opposition movements in other parts of the world build support and promote their causes, including Black Lives Matter, Syrian revolutionaries, democracy activists in places like Myanmar as well as Hong Kong, and, more darkly, Islamic extremists and far-right nationalist groups across the world.

States still wield a lot of power in this information war, but attempts to counteract social media with state-driven online messaging tend to be viewed as inorganic, leaving them at a disadvantage in an information environment where authenticity is key.

“Broadcast television has been tightly controlled from its inception by political and commercial elites. The digital revolution exploded this top-down model.”

A recent U.S. Army War College report spelled out the magnitude of this transformation, which has accelerated as the internet has grown more powerful and become as much a visual medium as a textual one.

“In the modern era, broadcast television has been tightly controlled from its inception by political and commercial elites who wish to shape public discourse and protect the audience from messages they find harmful or unprofitable,” the report stated. “The digital revolution exploded this top-down model. Vastly more individuals and groups across the globe now have access to inexpensive cameras, sophisticated visual media tools, and a virtually free delivery system on the Internet.”

As a result, the report’s authors continued, “The dominance of state and industrial information producers has receded, and a new crop of visual communicators has swept aside the old rules and relationships.”

As Israel carries out military operations, many of which result in the deaths of Palestinian civilians, including airstrikes on the Gaza Strip that killed at least five children, the visceral impact of the rest of the world seeing the results in real time may make it politically difficult for even its friends to support it in the years ahead.

Still, rather than decentralized protocols controlled by no one, social media platforms are themselves profit-making entities vulnerable to political pressure, just like old media institutions. During the Sheikh Jarrah protests, pro-Palestinian users complained of mass takedowns of their online content.

“It has helped without a doubt that today ordinary Palestinians are able to share their stories with the rest of the world on social media,” said Marwa Fatafta, the Middle East and North Africa policy manager at Access Now, a digital rights organization. “Everyone knows what is happening in Sheikh Jarrah right now and that is because of social media, but unfortunately, whenever things reach a certain peak, what we see are these mass takedowns of content.”

Fatafta added, “These companies need to provide transparency about their decisions on restricting content, particularly during these extremely critical times.”