At a House hearing on Thursday, Bush confronted FBI Director Christopher Wray over the bureau’s ongoing surveillance of protesters for racial justice. At a House Judiciary Committee hearing on oversight of the Federal Bureau of Investigation on Thursday, Rep. Cori Bush, D-Mo., asked FBI Director Christopher Wray for information the bureau had collected on her work as an organizer and activist before her time in Congress. In 2014 and 2017, Bush protested in Ferguson, Missouri, and St. Louis — after police killed 18-year-old Michael Brown and after a judge found the officer who killed 24-year-old Anthony Lamar Smith not guilty, respectively — and the FBI is known to have collected data on several of the demonstrations in which she participated.

On June 4, Bush sent a letter to Wray requesting that the bureau deliver access to all information it had collected on her protest and organizing activities before Wray’s scheduled testimony on Thursday. Her office said the inspector general for the Department of Justice responded Thursday to a different letter she sent in February, asking about the disparate treatment of protesters last summer and the people who participated in the January 6 attacks on the Capitol. According to Bush’s office, the inspector general’s review is pending.

“Public reporting leaves little doubt that the FBI did, in fact, investigate and surveil those who were protesting for racial justice against police brutality,” Bush wrote. “I was one such protester.” She had not received a response by Thursday morning.

“When can I expect to hear back from the bureau regarding that information?” Bush asked Wray at Thursday’s hearing, referring to the data the FBI had compiled on her protest activity. Wray replied that he had only recently learned about the letter, that the bureau receives thousands of requests for files, and that he would have his staff follow up to help her understand how the process works. Bush went on to ask him whether the bureau had deputized federal agents and law enforcement agents in response to civil unrest last summer; if the FBI was authorized to use force in response to the Capitol attacks; and why Wray had stated, earlier in the hearing, that the FBI doesn’t surveil First Amendment protests when there is ample evidence to the contrary.

Federal authorities have long surveilled and infiltrated activist movements in the United States, with a particular focus on Black social justice and civil rights organizers, including Marcus Garvey, Martin Luther King Jr., the Black Panthers, and Black Lives Matter. As The Intercept reported in 2015, the Department of Homeland Security has routinely monitored activists since the 2014 uprising in Ferguson. The FBI’s counterterrorism division identified a fictional “black identity extremism” movement as a threat until as recently as 2017, and it warned that “perceptions of police brutality against African Americans” drove “an increase in premeditated, retaliatory lethal violence against law enforcement and will likely serve as justification for such violence.”

The practice continued last summer, when the FBI flew an advanced spy plane over Black Lives Matter protests in Washington, D.C. — the same vehicle they used to surveil protests in Baltimore after police killed Freddie Gray in 2015. Meanwhile, the agency says it does not monitor “First Amendment-protected activities” without a tip or open investigation; the bureau cited that as a reason it did not catch social media activity related to planning the January 6 attacks on the Capitol.

“For so long we’ve been criminalized and intimidated,” Bush said. “And I’ve watched this. And I’m one of those people. I have a unique position now to be able to ask those hard and key questions that nobody else can ask the director the same way that I can — coming directly from the movement and still being very much a part of that same movement.” Bush said she was targeted as an activist “quite a bit” and believes that she was under surveillance, adding that “the FBI has this history of surveilling Black activists and protesters and civil rights leaders.” 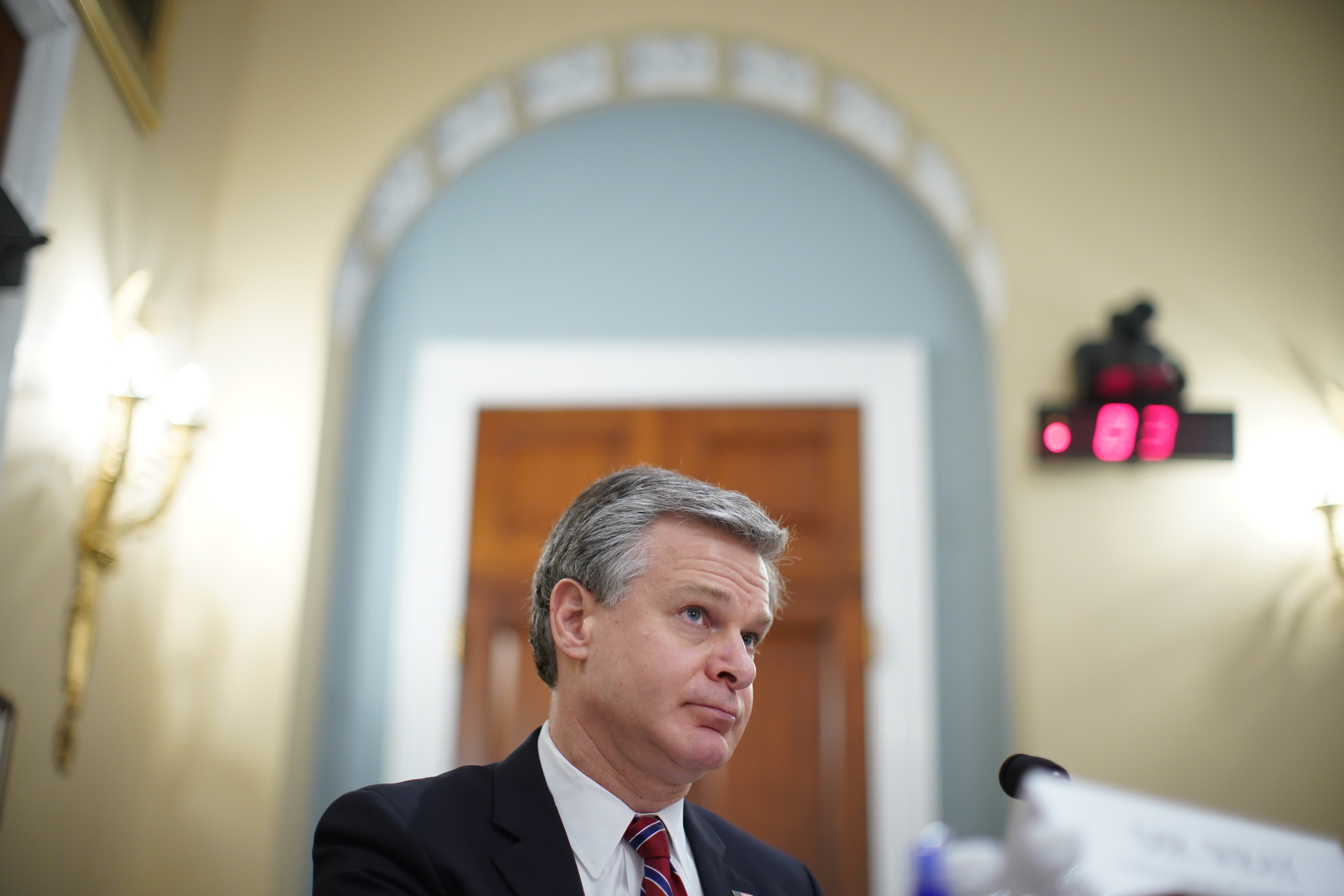 Christopher Wray, director of the FBI, pauses during a House Intelligence Committee hearing in Washington, D.C., on April 15, 2021.

To further suppress protests for racial justice, federal and local governments have also resorted to stacking criminal charges against activists to increase their penalties and passing new laws to criminalize specific kinds of demonstrations. Earlier this year, dozens of states introduced anti-protest laws designed to crack down on protests against police brutality, and some states rebranded “anti-terror” bills to apply to activities associated with protests for Black lives. In April, Florida adopted some of the most chilling anti-protest legislation in the country: a new law granting civil immunity to a person who drives their car through a crowd of protesters. As The Intercept reported last month, much of the push behind such legislation was driven by law enforcement groups.

“For so long we’ve been criminalized and intimidated. And I’ve watched this. And I’m one of those people.”

Hundreds of people who participated in protests last summer were charged with high-level felonies, including charges of terrorism for several teenagers. In October, federal agents arrested Anthony Smith, an influential activist in West Philadelphia known for helping topple a statue of former mayor and Philadelphia Police Commissioner Frank Rizzo, claiming that he had “aided and abetted” in the arson of a police car in May. In July, Smith had been a lead plaintiff in a civil rights suit against the city after police shot rubber-tipped bullets at protesters and tear-gassed hundreds of demonstrators marching through an enclosed tunnel. Smith was released from pretrial detention after local activists organized a petition and sent more than 70 letters of support to the judge in Smith’s case. His trial is pending.

“I remain concerned that many law enforcement agencies continue to characterize Black protestors as a threat to public safety rather than as citizens who are more than justified in exercising their First Amendment right to organize and voice their grievances,” Bush wrote, pointing to the bureau’s past use of the term “black identity extremism.” She added that she would introduce legislation to “correct the Bureau’s excesses, if necessary.”

Bush said she couldn’t yet discuss specifics of the legislation, but her office is working on a protester’s bill of rights, similar to local proposals in Missouri. “We know that we want to protect our protesters and curb any intimidation tactics,” Bush said, noting that states across the country, including Missouri, introduced or passed anti-protest legislation this year.

“Rather than using last year as an opportunity for the racial reckoning that it should have been, lawmakers we saw all across this country proposed, and then they passed, all of these dozens of punitive measures to prevent protest instead of actually dealing with what was the real issue,” Bush said. “Where is the police accountability? We’re not protesting because we don’t have anything else to do. We’re protesting because we’re trying to save Black life. So where are those measures?” Bush said she and Missouri state Rep. Rasheen Aldridge, who also came out of the activist movement in Ferguson, spoke out against similar proposals in Missouri, and the bills died in session.

Following the January attacks on the Capitol, Bush introduced a resolution calling on the House Ethics Committee to investigate whether members of Congress violated their oath of office in seeking to overturn the results of the 2020 presidential election. “It’s not going away, but we’re not at the point where we’re able to move that the way I would like to see it move,” Bush said. Given that the Senate couldn’t pass a bipartisan commission to investigate the attacks, she said, the resolution is more important than ever, but its chances of moving are bleak. “We won’t let it go. But we saw how hard it is to even get the commission passed.”

When people call the movement fighting for Black lives a “terrorist organization,” Bush said, “it couldn’t be further from the truth. When the truth is that white supremacist groups have been behind over 60 percent of the attacks last year. The real threat that we need to take seriously, they don’t want to touch.” On top of that, she said, “We have to be very clear that the bureau has a white supremacy problem in their ranks.” The FBI has long been aware of the issue of white supremacist infiltration of law enforcement, The Intercept has reported.

At the hearing on Thursday, House Judiciary Chair Jerry Nadler, D-N.Y., asked Wray if the bureau was conducting an internal review “to root out white supremacy and other extremist ideology” or if it would commit to doing so. Wray said the bureau takes the “insider threat” very seriously and would provide Nadler with more information on existing procedures and related internal review processes.

Bush told The Intercept that she didn’t know before coming to Congress that she could request this kind of information, and many activists still don’t realize that they can do so. She added that she wants people to know that they can call her office if they need help with a public records request.

“You gotta push back against what seems like this system of intimidation and suppression,” Bush said. “The more we do this, they will have to do something.”