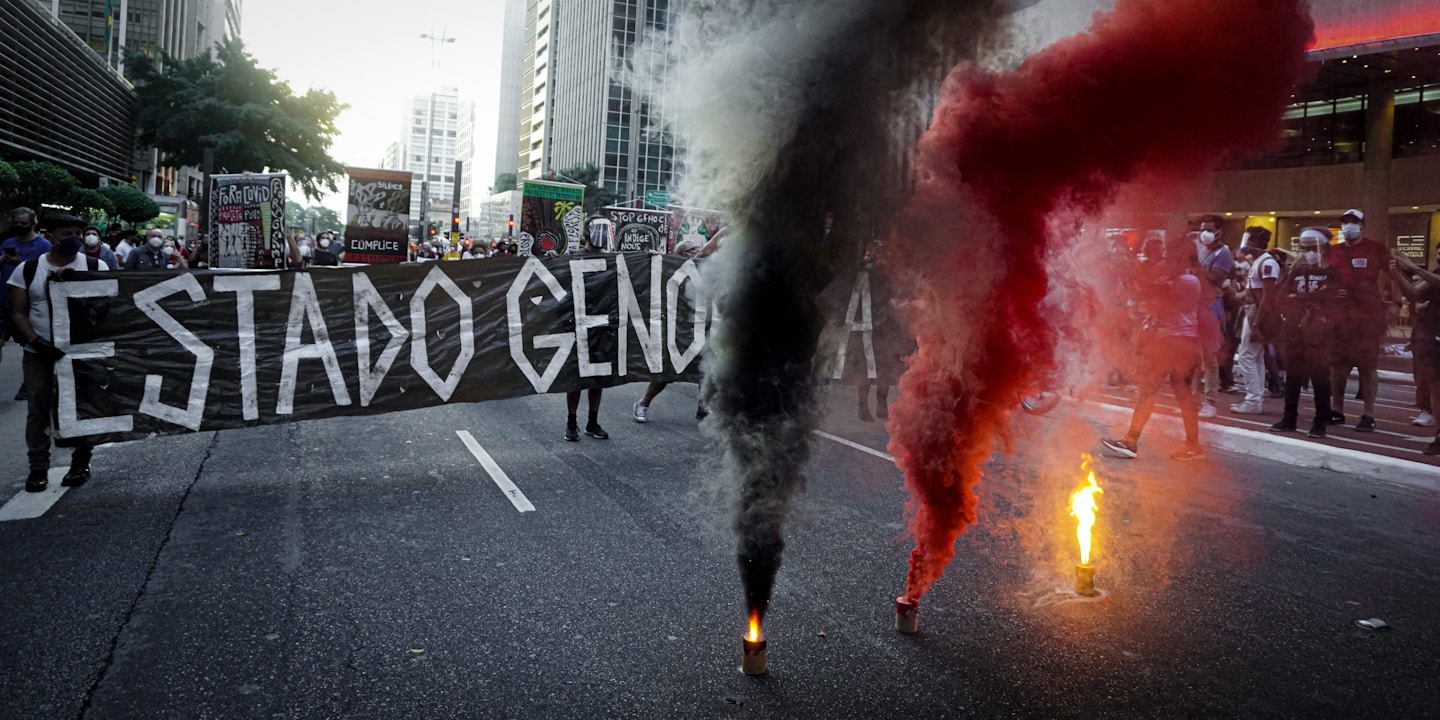 Bright red blood gushed through Daniel Campelo da Silva’s fingers, staining his otherwise immaculate white polo shirt. He was out buying work supplies on May 29 in the northeastern Brazilian city of Recife. Peaceful protests against far-right President Jair Bolsonaro were sweeping Brazil, and da Silva was walking into one, unaware that riot police would soon, without warning, violently crack down. A police officer shot the 51-year-old da Silva with a rubber-tipped bullet, leading to the loss of his eye.

Da Silva’s tragic misfortune is emblematic of multiple facets of Brazil’s descent into disarray. On a basic level, a common man working to pay his bills is permanently scarred by authoritarian state violence, carried out in an effort to stamp out left-wing resistance. Beneath the surface, a more ominous dynamic was at work: Gov. Paulo Câmara, a Bolsonaro critic and commander-in-chief of the state police, insists that neither he nor anybody from his office gave the order to attack the protestors. The president’s interests had apparently overridden the governor’s legal authority over the security forces. One columnist was prompted to ask: “Who commands the police?”

How far will Bolsonaro go to stay in power?

The power struggle and the consequences for people like da Silva raise another, larger question: How far will Bolsonaro go to stay in power?

Bolsonaro, who faces record disapproval, has ratcheted up his pressure on opponents in various ways, attempting to fortify himself ahead of presidential elections next October. He has worked to build a solid base among local police rank and file (although that support may be fading) and replaced wavering allies with loyal shock troops in key military, intelligence, and law enforcement positions. All the while, Bolsonaro has repeatedly signaled his desire to rewrite the rules to give himself more power, even if it requires a coup to do so.

In recent months, Bolsonaro has increasingly taken to the courts to stifle dissent among prominent adversaries. Critics of the president — including journalists, politicians, Indigenous leaders, YouTubers, professors, and activists — have been investigated under the dictatorship-era National Security Law, which is widely considered unconstitutional.

One such case involved leading Brazilian YouTuber Felipe Neto, an outspoken Bolsonaro critic who referred to the president as “genocidal” over his disastrous handling of the Covid-19 pandemic. Neto, who got his start making videos for young people, was also investigated for alleged “corruption of minors,” but the charges were dismissed by a judge last week. Neto said the case was an attempt to use the judiciary as an “instrument of persecution of the president’s opponents.”

The National Security Law was increasingly in the spotlight and at risk of being struck down by the Supreme Court — past due, critics said, for a relic of the dictatorship that ended in 1985. The president’s supporters in Congress, though, rushed to introduce legislation that repealed the law but maintained many of its provisions in a separate, new bill. The legislation passed the lower house of Congress last month.

Along with a host of other civil society groups, Abraji, the Brazilian Association of Investigative Journalism, said it strongly supports repealing the law and does “not support any bill currently being developed to replace it.” The group highlighted that the new bill, as written, could be used to “criminalize everyday behaviors” of journalists and give rise to the prosecution of whistleblowers.

Marcelo Semer, a law professor and member of the Association of Judges for Democracy, told The Intercept that the law is more likely to be used for state repression of dissidents than to protect Brazil’s fragile democracy against a coup. In a recent congressional hearing, he called the National Security Law “an obstacle to democracy” and argued that it would be much better to revoke it than replace it.

That analysis likely won’t resonate with Bolsonaro, who has never been particularly fond of democracy and only criticized the military dictatorship for not going far enough. In a 2016 interview, Bolsonaro said, “The mistake of the dictatorship was to torture and not kill.” His son, Rep. Eduardo Bolsonaro, and many supporters have repeatedly called for “a new AI-5,” referring to the notorious 1968 military decree that heavily curtailed political freedoms and institutionalized torture, inaugurating what became known as the “Years of Lead.” President Jair Bolsonaro is seen during an announcement at the Planalto Palace on March 31, 2021, in Brasilia, Brazil.

War on the Press

“I’d like to punch you in the mouth, you bastard,” Bolsonaro told a reporter last year. It was just one of hundreds of threats that the president had lobbed at the media since taking office in 2019. According to the National Federation of Journalists, physical and verbal attacks on the media have reached all-time highs under this presidency, growing rapidly year over year.

The administration has largely closed its doors to news media that publish anything critical, making it harder to verify even basic facts. It also greatly increased advertising spending but radically shifted its tens of millions of dollars in ad buys to favor politically aligned outlets. Meanwhile, Bolsonaro’s supporters have repeatedly accosted journalists in the streets, preventing them from doing their job.

Bolsonaro, who once told journalists that they are “an endangered species,” is running nothing short of a campaign to destroy the media. Patricia Campos Mello, a veteran journalist who recently won judgments against the president and his son Eduardo for offensive comments, has drawn comparisons between Bolsonaro’s playbook and Hungarian Prime Minister Viktor Orbán’s successful campaign against the press. Orbán was able to co-opt major outlets, economically squeeze resistors, delegitimize independent journalists as “enemies,” and use state powers to limit press freedom. Bolsonaro has made inroads in all of these areas.

The developments are concerning, but Celso Rocha de Barros, a political columnist for the Folha de S.Paulo newspaper, said the recent cases brought against critics might be a sign of weakness rather than strength. “They see that this is the worst situation they’ve been in yet,” said Barros, citing low approval numbers, a sagging economy, and the return of former President Luiz Inácio Lula da Silva to the political scene.

Late last month, Senate police launched an investigation into Barros after he criticized Bolsonaro allies for trying to obstruct a Senate inquiry into the government’s miserable handling of the pandemic. “Their goal is clearly to intimidate, to limit criticism against them,” Barros said. “I personally will not be intimidated.”

Much could change before the election. Congress has clearly shown no interest in impeaching the president, which gives Bolsonaro 16 months — an eternity in fast-paced Brazilian politics — to pray for an economic recovery and successful vaccination campaign that would win voters’ confidence.

He likely won’t be relying on improved conditions alone. Bolsonaro could attempt to use partisan allies in the executive branch, media, judiciary, and law enforcement to manipulate the election in his favor. Current polling shows that Lula would win handily, but Bolsonaro, like former U.S. President Donald Trump, has clearly signaled that he does not intend to accept a loss at the polls.

Bolsonaro has been on a campaign to delegitimize Brazil’s electronic voting system, saying he will only accept the results of an election with paper ballots. “This is just a smokescreen that creates the environment for them to discredit the results of the polls,” said João Amoedo, an opposition politician, last month.

“There’s a coup practically scheduled for next year if they lose the election.”

Last week, former President Michel Temer expressed concern that Bolsonaro would attempt a coup if he lost. Temer, a center-right politician, argued that supporters of Brazilian democracy needed to do more to improve relations with the military, which is firmly allied with Bolsonaro, to prevent such an eventuality.

“There’s a coup practically scheduled for next year if they lose the election,” said Barros, the political columnist, though he is doubtful Bolsonaro can pull it off.

Eduardo Bolsonaro, meanwhile, appears to have thought through coup strategies. The younger Bolsonaro was on hand in Washington, D.C., and met with members of the Trump family and inner circle before, during, and after the Capitol insurrection on January 6.

In an interview with the Estadão newspaper in January, Eduardo Bolsonaro suggested the problem was not that the far-right insurrection took place but that it was poorly executed. “It was a disorganized movement. It was unfortunate. Nobody wanted this to happen,” he said. “If it were organized, they would have taken over the Capitol and made demands that the invading group established in advance. They would have minimal military power to not kill anyone, kill all the police inside or the members of Congress that they hate so much. When the right becomes 10 percent of the left, we are going to have civil war in all western countries.”