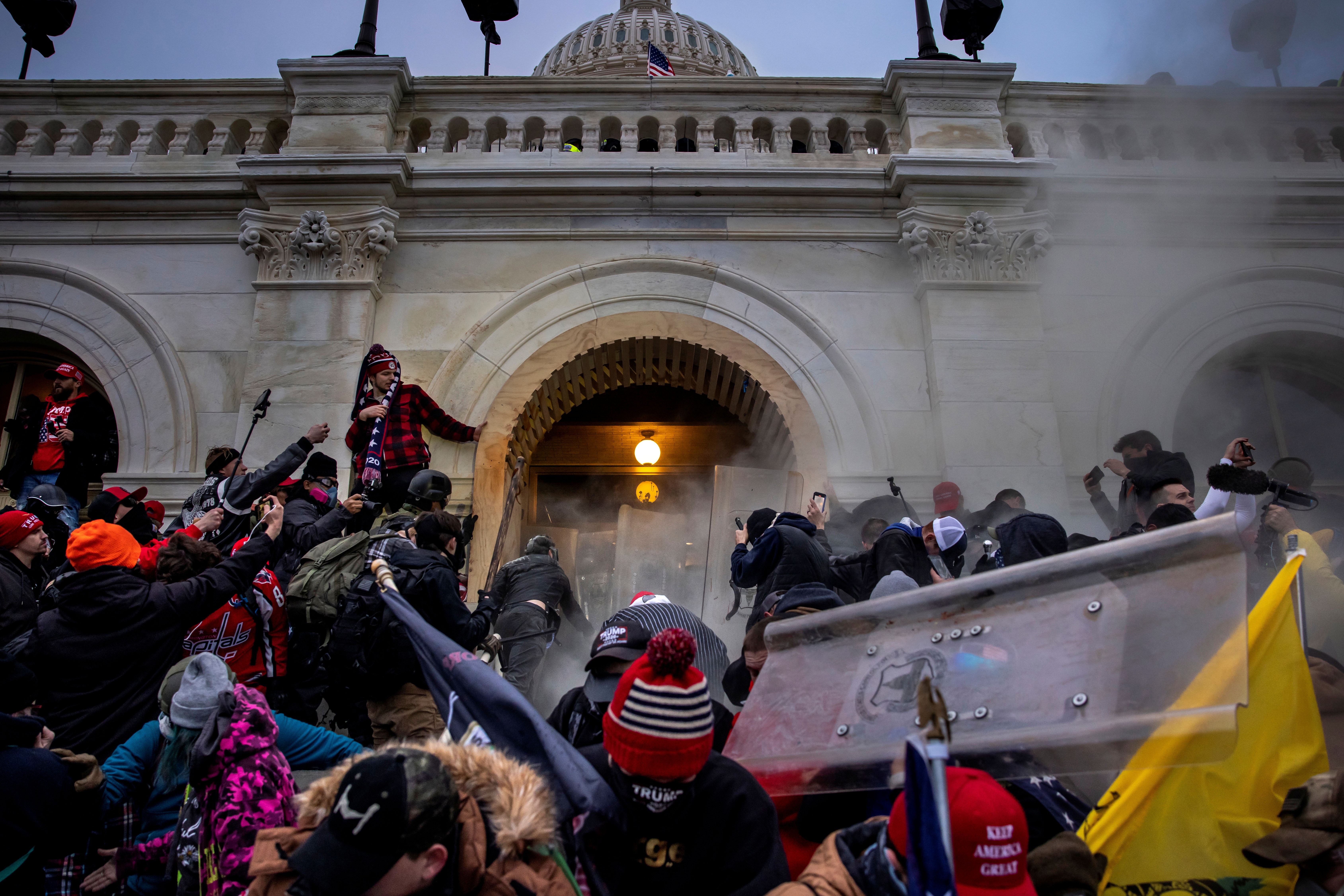 Trump insurrectionists are seen breaching security and entering the U.S. Capitol as Congress debates the ratification of the 2020 presidential election results in Washington, D.C., on Jan. 6, 2021.

I don’t take Tucker Carlson seriously. No one should. Carlson’s own employer, Fox News, even says as much about its primetime host.

So I was amused last week when a Google News alert told me that Carlson mentioned my name in his June 15 monologue. “Trevor Aaronson’s book ‘The Terror Factory’ analyzed every terrorism prosecution from 2001 to 2013,” Carlson told his viewers. “Aaronson found that at least 50 defendants were on trial because of behavior that the FBI had not only encouraged, but enabled. FBI agents were essentially the plotters in these crimes. They made the crimes crimes.”

I’ve covered the FBI for more than a decade, and a lot of my reporting has focused on the FBI’s use of informants and sting operations in the so-called war on terror. During the last two decades, the Justice Department has prosecuted 350 defendants on international terrorism charges that emerged from FBI stings. In many of these stings, informants or undercover agents provided all the money and weapons for terrorist plots, and sometimes even the ideas — raising significant questions about whether any of these people would have committed the crimes were it not for the FBI’s encouragement. Many targets of these FBI stings were mentally ill or otherwise easily manipulated.

But Carlson didn’t mention my book because he’s suddenly concerned about the entrapment of Muslims in aggressive FBI stings. He used it to support a theory for which he has zero evidence: that the January 6 storming of the U.S. Capitol was some sort of FBI-engineered plot.

Carlson’s claim fits an existing and well-established argument: that the FBI creates crimes through aggressive stings where no crimes would otherwise exist. But in the specific case of the insurrection at the Capitol, there is no evidence I’ve seen to support the claim. In fact, the evidence Carlson and others have presented is based on a misunderstanding of the terms that the FBI and the Justice Department use in court records.

Carlson’s theory is based on a story published by Revolver News, a site that refers to Chicago as “Chicongo” and which the Fox News host described with a straight face as “one of the last honest outlets on the internet.” The Revolver story focused, in part, on a 65-year-old Oath Keeper named Thomas Caldwell, who was indicted for his alleged role in the Capitol riot. In Caldwell’s court records, the FBI identified two unindicted co-conspirators — termed Person Two and Person Three in the records — as having assisted Caldwell. According to the indictment, Caldwell wrote to another man who was indicted, Donovan Crowl, about how he was working with Person Two and Person Three around the time of the Capitol riot:

[PERSON TWO] and I are setting up shop there. [PERSON THREE] has a room and is bringing someone. He will be the quick reaction force. Its going to be cold. We need a place to spend the night before minimum. [PERSON ONE] never contacted me so [PERSON TWO] and I are going our way. I will probably do pre-strike on the 5th though there are things going on that day. Maybe can do some night hunting. Oathkeeper friends from North Carolina are taking commercial buses up early in the morning on the 6th and back same night. [PERSON THREE] will have the goodies in case things go bad and we need to get heavy.

Revolver’s theory is that Person Two and Person Three are in fact FBI agents, and the Justice Department redacted their names to protect them and cover up for how the agents entrapped Caldwell, in a manner similar to the way we’ve seen FBI agents set up unsuspecting Muslims. Carlson has adopted this theory in full. “They were almost certainly working for the FBI,” he said in his June 15 monologue, referring to these two unidentified people. “So FBI operatives were organizing the attack on the Capitol on January 6, according to government documents.”

This may seem like a good theory, but anyone who commonly reviews these types of court records knows the FBI and the Justice Department do not describe undercover agents and informants as “unindicted co-conspirators.” Agents are identified in such records as “undercover employees,” and informants as “cooperating witnesses” or “confidential human sources.” An “unindicted co-conspirator” is someone who takes part in the crime, but who, as the term clearly suggests, hasn’t been indicted.

The theory put forward by Revolver and Carlson requires you to believe that the FBI and the Justice Department disregarded long-standing practices and policies to cover up for the fact that Person Two and Person Three were government agents. And in the very unlikely event that did happen, there’s nothing in the records to suggest the Capitol riot occurred because of Person Two or Person Three.

There are a variety of potential reasons why Person Two and Person Three, in the Caldwell case, haven’t been indicted yet, including the possibilities that the FBI has not found them or that revealing their identities in court records at this time would harm ongoing investigations.

Despite this theory being based on ignorance of FBI and Justice Department terms, it’s had legs. The New York Times and the Washington Post, among other news media, felt compelled to publish stories addressing it. And since Carlson’s mention of my book, I’ve received about a dozen requests to be a guest on conservative radio talk shows — an example of how the right-wing media echo chamber quickly tries to reinforce narratives, however dubiously constructed.

At the same time, I think it’s worth noting that there’s a reason for the cultural stickiness of the claim by Revolver and Carlson. It might be a conspiracy theory, but it’s not exactly “baseless,” as the Post described it. That’s because there are genuine concerns that the sting tactics used over the past two decades against impressionable Muslims will be used against equally impressionable Americans with right-wing ideologies. In the supposed plot to kidnap Michigan Gov. Gretchen Whitmer, for example, FBI agents and an informant played significant roles, raising the same question that surrounds so many supposed Islamic State and Al Qaeda cases in the United States: Would this plot have happened were it not for the FBI?

In addition, there is evidence the FBI is assigning informants to infiltrate groups based solely on right-wing ideology. And the increase in right-wing violence in recent years has prompted calls for new anti-terorrism laws that would give the FBI even more power.

I think the FBI’s investigation of potential right-wing threats, and the degree to which the bureau replicates its abusive post-9/11 tactics, will be a critically important story in the coming years. How news organizations report on it will be a significant test.

But so far, there’s no evidence to support the claim that the Capitol riot was an FBI-led plot.